My overly thick hair has proved resistant to water, wind and a collection of hair products -- so I finally decided to do something about it. 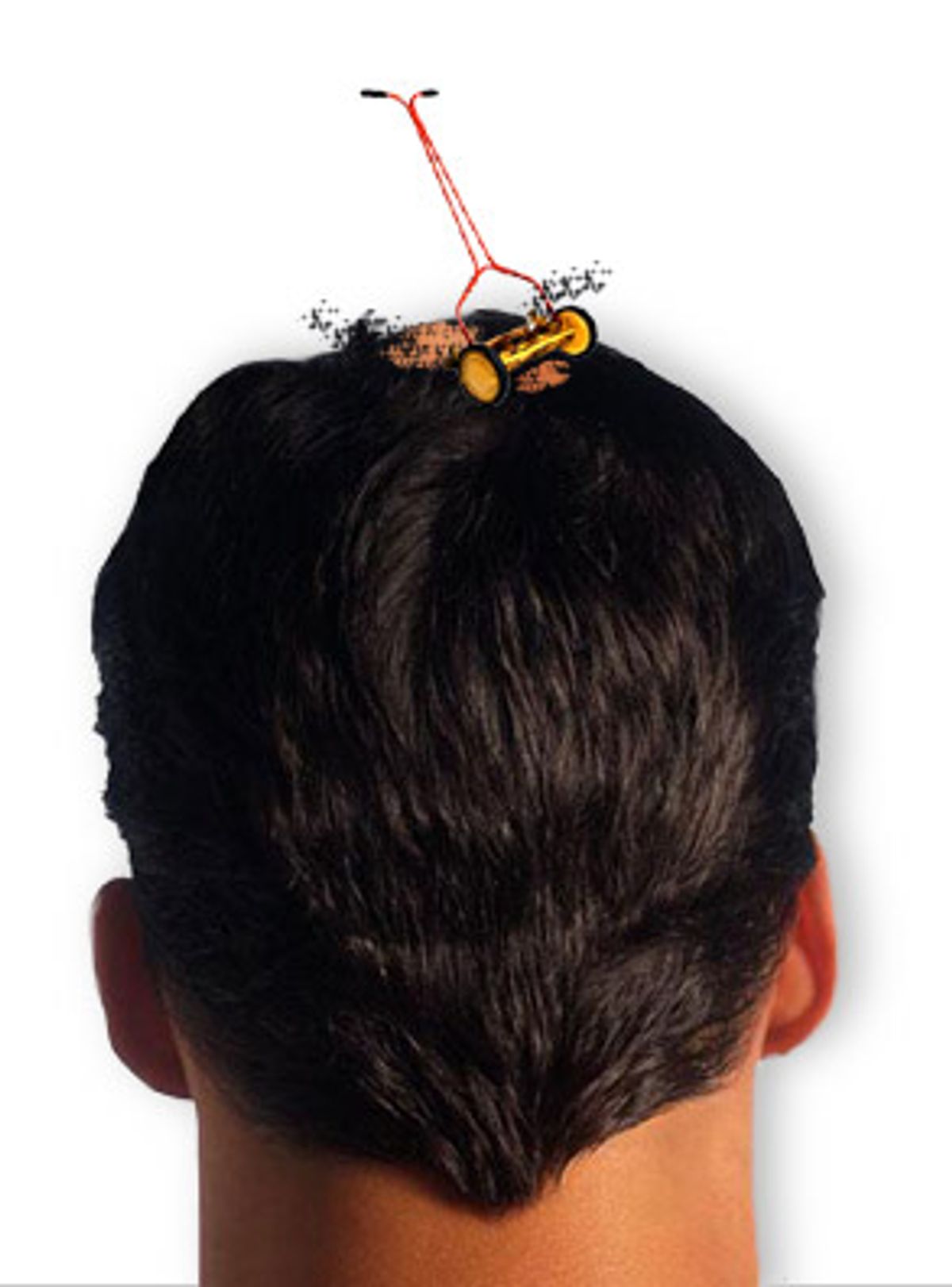 I was having a drink recently with my friend Josh, who, at 34, had decided to shave off what little hair populated the sides of his head and go for the cue-ball look. I couldn't lie and tell him I liked it. To me, a man with a shaved head -- or at least a Caucasian man -- looks like a postoperative patient, or one of the more contumacious tenants of Sing Sing.

"I'm telling you, women love it," he enthused. "My sex life has never been better!"

I will never have the opportunity to test that hypothesis, for I belong to a small minority group that, despite its enviable status in the eyes of many, is not all about luxuriating among margaritas and models. We are men with uncontrollably thick hair -- that is, males who were dispatched into the world with extreme follicular overload, and have retained it against the depredations of time, bad diets, stress and cheap shampoo. As a result, we face a lifetime of struggle attempting to tame hair that is so dense, and so obdurate, that its maintenance eclipses many other vital daily pursuits, like picking up the kids from school.

The age-old fear among bald men that their condition suggests premature aging and attenuated sexual potency is something that we need not contend with. So one might conclude that we're lucky fellows. But below the flocculent surface there is another trying reality.

The ordeal starts first thing in the morning. Because of the extreme density of my salt-and-pepper hair, during the night it molds into the shape of my movements during slumber, taking on many unique and humorous contours.

Frequently, when I look into the bathroom mirror, I am greeted by a puffy-eyed cartoon character who is crowned by a tall, gauzy ziggurat of hair. Rising from a sturdy foundation, it defies gravity by twisting and twirling skyward, thickening ever so slightly at the top to form an observation deck at the peak.

A hot shower topples the structure, but it only buys time. I barely dry my hair with a towel because moisture holds it down. En route to the subway, however, it begins to dry, commencing an aeration process akin to an inflating balloon, usually reaching full-blown cumulosity just as I walk into my office.

Throughout the day I self-consciously run my fingers through my hair in a futile attempt to flatten it. And sometimes, before an important meeting or upon arriving at a restaurant, I seek out the nearest water source and liberally irrigate the property. This alleviates the problem for about 15 minutes -- better than nothing.

It is well documented that hair, or lack thereof, is atavistic, commonly linked to one or more ancestors several generations back. It is said that the average human skull has about 100,000 hairs, and that we lose 50 to 80 per day -- mostly on navy blazers and contact lenses. The number of hairs that regenerate varies. For balding people, it's very few. For me, it's like fighting a guerrilla war -- for every individual eliminated, two just like him show up.

It has been postulated that severe hair loss is caused by an overproduction of testosterone that thickens the galea -- the top sheet of scalp tissue -- thereby constricting capillaries that feed hair roots. According to Scientific American magazine, by age 50 about half of all men and women suffer hair loss. And while at present there is no surefire way to curtail galea buildup, a number of simple at-home strategies have been suggested: minimal shampooing, scalp massage, headstands (15 minutes each time) and avoidance of excessive mental labor.

Studies prove that the only surefire preventative for hair loss, albeit inconvenient, is castration before puberty.

While perusing the scientific literature I came across another interesting fact: There seems to be a link between hair loss and coronary disease. The Physicians Health Study, which investigates health issues based on the experience of nearly 20,000 physicians monitored over 11 years, found that there was a correlation between hair thickness and heart disease. Specifically, the risk of cardiovascular illness rose in direct proportion to hair loss, with totally bald subjects facing a 30 percent higher incidence of heart disease that those sporting a full mop.

I thanked her for the compliment, bought the $45 cologne, and tried to explain that when it came to hair, more is not always better. In fact, at times it felt as if I were carrying a cat on my head.

My wife, Amy, has tried to help. She is an editor at a women's magazine and she often brings home hair product samples to experiment with on me. Not one has worked. My porous hair takes to gels like the Sahara to rain: They glimmer briefly on the surface, then disappear without a trace. A few weeks ago she came home with a scary-sounding German product called OSOS X-TRA, purported to be strong enough to flatten a Ford Explorer.

"This should work," she declared, massaging in a generous amount.

For about 45 minutes all was quiet on the Maginot Line. An hour and a half passed with only slight puffing over the temples. Not bad, I thought. Let's take it for a road test.

A southwest wind at about 20 miles per hour provided the perfect laboratory. About three blocks from home a strong gust rattled the roof, but, encouragingly, it held. The second blow, however, blew out the joists and up it went, flapping vertically in the familiar fashion. That was it. I am 50 years old and have spent one third of my time wrestling with my hair. It was time for something radical.

"I'm having my hair thinned," I announced to Amy.

"You are so not getting your hair thinned."

"Because you're not. You look fine."

"Look at me in photos. It's like I'm wearing a helmet!"

"Oh stop. There's nothing wrong with your hair."

I ignored her. The next morning I found an eccentric little hair salon near the Plaza Hotel called the Windsor, and on a whim decided to go in. I was greeted by a friendly woman with bleached yellow hair and so much eye makeup that she resembled a raccoon. Most of the clientele were pleasant older ladies who clearly held lifetime proprietary rights to their revolving chairs. Somewhat surprised to see a man in the salon, they nodded and smiled.

I was beckoned to a free chair by Millie, a handsome middle-aged lady with a strong Hungarian accent.

"I bet you don't get this request often," I stammered, "but I want less hair. I mean, it's too thick."

She walked around the chair examining by head as if it were some abstract sculpture.

"What beautiful hair you have!" she enthused. "You will never go bald."

Brandishing scissors whose blades resembled two combs, she went to work, stopping periodically to do I-don't-know-what with a straight razor. Twenty minutes later the floor was aglitter with what I have always called salt-and-pepper hair but is actually well on its way to salt.

"How does it look?" she asked, stepping back and twirling me around so I could see both aft and stern.

With my hair brushed back from my forehead, I thought I resembled John Gotti. "Very good," I lied.

Three other hairdressers approached for a closer inspection.

"So much better," one said. "You look so much younger!"

Outside, I mussed away the don look. Passing a mirror in a nearby store window, I took a second look. Not all that bad, I thought. I headed home with trepidation.

"It's fantastic! So much better!" Amy exclaimed, adding reassuringly, "You should have done this 20 years ago."

"Then all that time you wouldn't have looked like such a jerk."