"The Day After Tomorrow"

In this inane special-effects vehicle, Americans desperately try to cross into Mexico to escape a frozen death. Audiences will do the same. 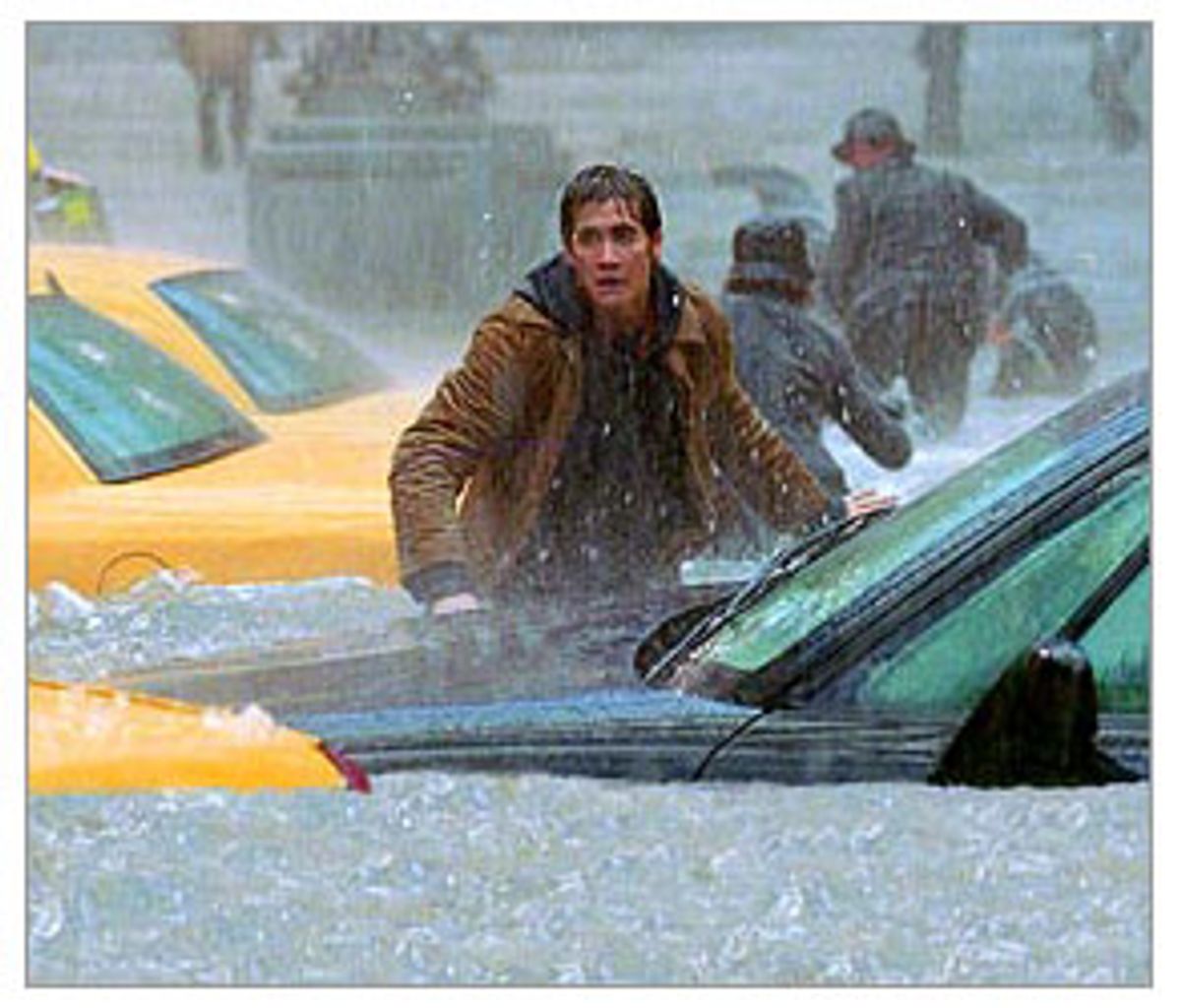 In "The Day After Tomorrow," New York City is besieged first by torrential rains, then by a massive tidal wave and finally by temperatures so cold that humans die instantly upon exposure. This means, of course, that most of the city's denizens die. Welcome to summer blockbuster season.

I suppose that, for some, there's pleasure to be had in seeing New York wrecked by Mother Nature (as opposed to terrorists), particularly in a movie that earnestly believes it's adding something to the global-warming debate. But "The Day After Tomorrow," Roland Emmerich's cautionary entertainment about massive climactic shifts that trigger a new Ice Age practically overnight, is a hollow colossus. Some of its special effects are impressive for their scale, if nothing else: There's one particularly poetic shot of the Statue of Liberty draped in snow to her waist, her crown and torch graced with giant icicles.

But while I'm not immune to the charms of Godzilla trampling his way through Tokyo, I'm not really sure I get the appeal of modern movies in which cities are destroyed for fun. I'm not just talking about New York. In "The Day After Tomorrow," bad weather hits just about everybody: In Los Angeles, hurricane winds pick off the letters of the Hollywood sign one by one, whisking them off to Oz before our very eyes; in Tokyo, hailstones the size of grapefruit clonk innocent citizens on the head, killing them instantly (in one instance, a wife's voice crackles frantically through a cellphone as her recently clonked husband lies dead in the street). And while "The Day After Tomorrow" makes much of the destruction of poor New York, and at least nods to the end of civilization as we know it in the upper United States (the Southern states, while subjected to some lousy weather, are left relatively unscathed), it never even mentions Canada: Presumably it's just a bunch of snow and pine trees and lumberjacks up there anyway, so who really cares?

Of course, it's pointless to take anything in "The Day After Tomorrow" too seriously. At the same time, though, it's obvious that Emmerich (who also co-wrote the script, with Jeffrey Nachmanoff) believes he's giving us escapism with a conscience. The movie's plot, such as it is, exists solely as an anchor for the special effects: Dennis Quaid is Jack Hall, a Washington, D.C., climatologist who has long been trying to warn the world's leaders -- particularly the vice president of the United States -- of the dangers of global warming. What he doesn't realize is that a global "superstorm," triggered by bad atmospheric stuff, is about to hit; within days -- not, as he had earlier predicted, hundreds of years -- much of the Northern Hemisphere will be covered by a giant ice cap.

That's bad news, particularly since Hall's son, Sam (Jake Gyllenhaal), has just headed north to Manhattan for a high-school academic competition. He and his friends, including the blinking, doe-eyed Laura (Emmy Rossum), are not only trapped by the bad weather; it could, as Hall warns his son in one rushed, last-minute phone conversation, kill them.

So Sam, his friends and a gang of other New York refugees hole up in the New York Public Library, where they burn books to keep warm. Hall, no stranger to bad weather, sets out to walk (!) most of the way from Washington to Manhattan to rescue his son. Meanwhile, his wife and Sam's mom, Lucy (Sela Ward), a doctor, frets and worries down in Washington while simultaneously tending to a tiny, bald, blind, winsome cancer patient -- and why not? Emmerich realizes that bad weather, fascinating and dramatic as it is, is sorely lacking in the human-dynamics department, while pediatric cancer gets 'em every time.

Emmerich adds some interlocking subplots and then drops them, inexplicably, when he loses interest in them: Some of the movie's best scenes between actual human beings involve three scientists at a weather base in Scotland (they're played by Ian Holm, Adrian Lester and Richard McMillan): When the weather starts getting bad and the trio run out of fuel, they break out a 12-year-old bottle of scotch and toast, in precisely this order, England, mankind and Manchester United, the English football powerhouse. But it's the last we see of them, and that's less than halfway through the movie. Admittedly, the movie has enough decency not to show us their deaths. But despite the fact that Quaid and Gyllenhaal do their damnedest to play believable human beings, nothing they do is particularly engaging. The Scottish weather guys, tucked away in their drab yet surprisingly cheery weather base, represent everything that's potentially appealing about disaster movies: These characters radiate cozy cheerfulness in the face of disaster. When they disappear, what little human warmth there is in "The Day After Tomorrow" goes with them.

There's some wit in "The Day After Tomorrow": When the movie's handsome dummy of a president (Perry King) is apprised of the dangerous global situation, he waits a beat and turns to his obviously far more knowledgeable vice president (Kenneth Welsh) and asks, blankly, "What do you think we should do?" In another sequence, Americans hoping to escape to safe, warm Mexico are turned away at the border. (They subsequently stream across the Rio Grande to enter the country illegally.)

But Emmerich's wobbly mix of goofiness and environmental alarmism doesn't work. The picture has none of the go-for-broke ridiculousness of, say, "The Core," a sci-fi disaster movie that connects with everything that's fun and silly and suspenseful about the genre. Despite the fact that "The Day After Tomorrow" is harnessed to the very real threat of global warming, it's still just a big, dumb movie, another Hollywood entertainment that, instead of tweaking and teasing our brains for fun, leaves us feeling thick and stupid. In one of the movie's most inexplicable sequences, a pack of wolves escapes from the zoo and runs amok over snowy New York, causing all sorts of trouble for Sam and his pals, who have temporarily left the library on a lifesaving mission. The wolves are probably hungry, or perhaps they're simply angry at humans for wrecking the planet. As they crankily prowl and skulk through the movie, they must be wondering, "What are we doing here?" a question at least some of us in the audience may be asking, too. And we have free will, so what's our excuse?