Hours after a deal was struck, armed Mahdi army forces are back in Najaf -- abetted by fresh volunteers. 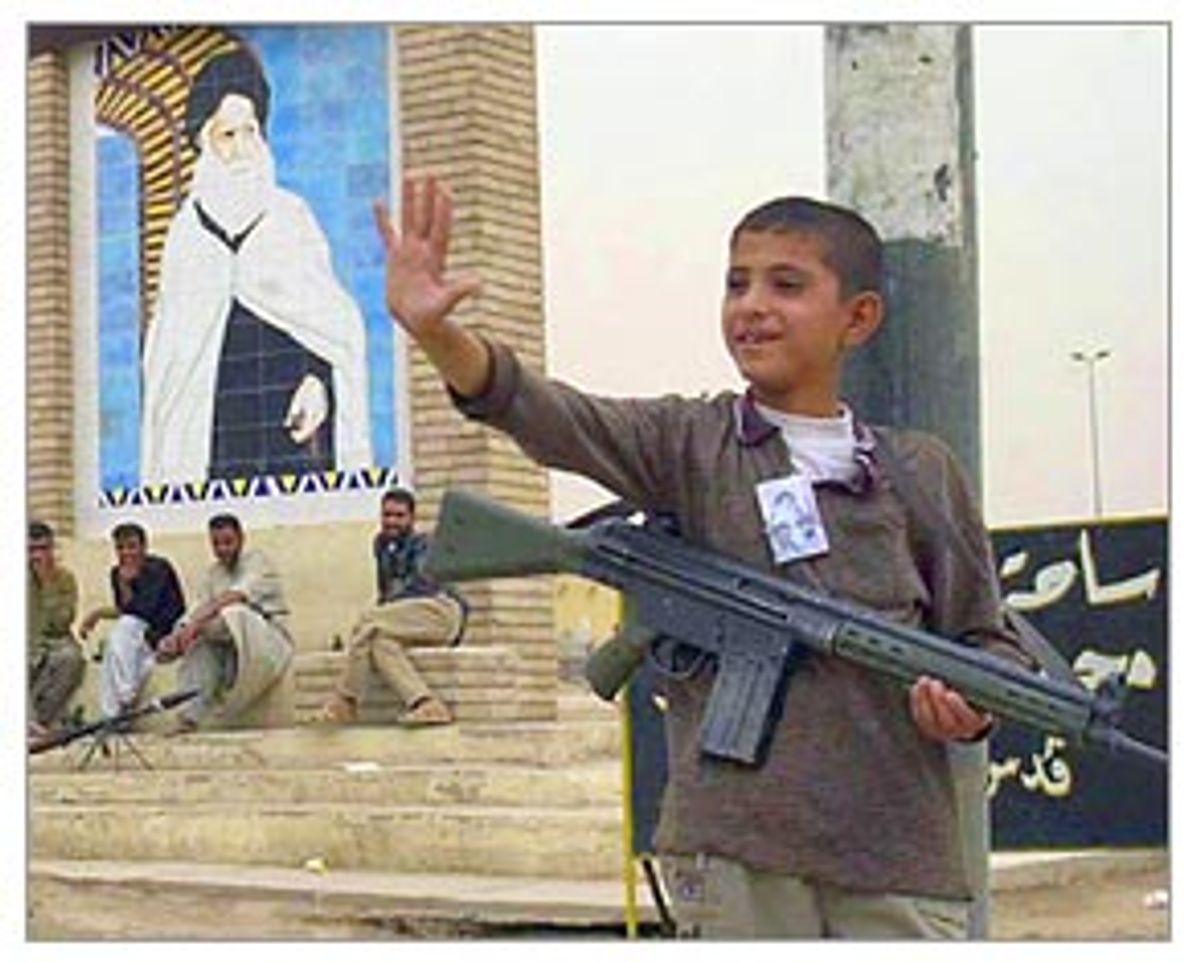 An Orwellian "peace" has descended upon Najaf. On Friday afternoon, the day after a peace agreement with the U.S. forces was announced, armed Mahdi army fighters were occupying all their usual posts. The men had retrieved their rifles and grenade launchers, which they had hidden away when the peace deal was announced, and were carefully watching people move through the city, asking visiting foreigners for their documents. Failure to produce the correct document can lead to immediate arrest.

According to the surprise peace agreement, worked out between the tribal authorities and the opposing sides, the Mahdi army was to permanently put down its weapons and withdraw from the city. In return, the United States promised to honor the cease-fire and suspend operations, pulling back to bases near Najaf. Iraqi police, not U.S. forces or militiamen, were supposed to return and guarantee order.

But as of Friday afternoon, the Mahdi army had made no move to withdraw or lay down its weapons, leaving the most important part of the peace plan in ruins. U.S. tanks usually parked near the police station at the Revolution of 1920 Square could not be seen. Despite much hopeful talk, Najaf has not been returned to civilian authorities: It is still under the aegis of the militants and the secretive Sharia court they use to deliver sentences.

Also on Friday, fighting between U.S. forces and the Mahdi army broke out in Kufa, which adjoins Najaf. Three people died and eight were wounded, hospital staff said.

Thursday in the holy city was a day of intricate theater that seemed engineered both to court the press and intimidate the people of Najaf. Men hoisted on the shoulders of their comrades recited poetry and sang heroic songs dedicated to Muqtada al-Sadr. Other fighters carried portraits of their leader and shouted out their loyalty, offering to become martyrs for him. What might have seemed like jubilation at the possibility of peace with the U.S. military was closer to a rallying cry to the faithful.

Unarmed Mahdi army fighters carried the flag-draped coffins of four comrades through the square in front of the shrine of Ali, parading the coffins in front of banners with hopeful political messages. But as soon as night fell, and cameras weren't rolling, the weapons came back into sight and the fighters sang and danced with rocket launchers and Kalashnikovs. This is a well-known Mahdi army practice, to hide weapons to appease the opposition for a day or two, then retrieve them when it is time for a show of force.

Ordinary citizens steered clear of the square in front of the shrine. When asked about the negotiations, one young fighter named Alawi said, "Maybe the fighters who are not from here will leave the city. They will go home and wait for instructions." Then, after a moment or two he said, "No, we will never leave Najaf."

Alawi had come down from Sadr City to join the resistance and had retreated with Mahdi army forces from Karbala a few days earlier. He was in high spirits when he talked about the future. Wednesday and Thursday nights were quiet and no shelling could be heard from the old city.

A thin militia man at a checkpoint across from the Ayatollah al-Sistani's house said on Thursday, "We have no orders to leave our posts. We will not leave Najaf until there is a direct order." They said they have not received any such order. As night fell on Thursday, Mahdi fighters picked up their weapons and went to their usual posts at the entrances to the old city.

On Friday morning, the number of armed men on the streets of Najaf did not seem to have diminished, and in places it seemed to have increased. And as of late Friday afternoon, Mahdi army volunteers were still streaming into Najaf, responding to Muqtada's call for assistance, some coming from other countries. The numbers of militiamen were growing significantly. Pickup trucks full of men with heavy weapons were parked on the street leading to the medina, or old town. Many of the fighters were from out of town. The trucks had been quickly painted over, and the faint image of the blue Iraqi police lettering was still visible.

With the pressure from the United States abated, the Mahdi fighters spent Friday acting as if they had just won a great victory.

It has been a lighting-fast turnaround. Earlier in the week, the religious militia had suffered high casualties in fierce battles with U.S. forces and seemed on the verge of collapse. Two charred vehicles in Kufa bore testament to an Apache helicopter attack on Sunday, the occupants burned beyond recognition. At least eight other Mahdi dead lay in a makeshift morgue outside Najaf's main hospital in a refrigerator truck. Tuesday also saw some of the fiercest battles since the beginning of the conflict: The U.S. military used tanks to attack Mahdi army checkpoints in Kufa as well as positions near the vast Najaf graveyard. Light poles in the small suburb of Kufa have been cut down by machine-gun fire, and concrete barriers pierced by artillery shells. The main street between the bridge over the Euphrates and the American base is in ruins.

But despite the heavy fighting and the high casualties of the last week, the movement seems to be going through a strange rebirth with the arrival of fresh volunteers.

Muqtada al-Sadr, who usually gives a sermon at the mosque in Kufa on Fridays, did not make his scheduled appearance, bitterly disappointing a crowd of at least 5,000 worshippers. Instead, an assistant gave a sermon harshly critical of the Ayatollah al-Sistani, who reportedly helped broker the peace plan and has criticized both al-Sadr's followers and the Americans. In the sermon, Jaber al-Khafaji blasted Sistani for not speaking out against the desecration of the Imam Ali shrine, one of the holiest Shiite sites. He went on to ask why there had been demonstrations when Sistani's house had been sprayed with gunfire, and none when the Americans crossed the "red lines" into the holy city of Najaf. "Why won't you speak? Will you wait until your own house is destroyed before you object?" al-Khafaji said. It was possible to interpret this as a veiled threat.

In fact, many independent observers here believe that forces loyal to al-Sadr are behind both the recent attack on the shrine and Sistani's house. At least one major news agency described the round that damaged the gate of the shrine as an Iraqi mortar shell.

The crowd of mostly young men raised their voices in a deafening roar when they thought al-Sadr was nearby. They stood and shouted his name as if he were a god in human form. Above them, fighters perched on the mosque walls scanned the horizon and kept their rocket launchers ready.

This reporter and another journalist, filmmaker James Longley, fled Najaf a few hours ago, after being warned that the Mahdi army was preparing to issue arrest warrants for us. A kid not associated with the militia came up to us on Rasul Street and said the men at the Sharia court were trying to work out a way to pick us up as spies. The threat appeared credible and we decided to leave Najaf immediately and drive back to Baghdad.