After Super Bowl-style fanfare and 65 million votes, TV's most popular show concludes with Fantasia Barrino as the most deserving "American Idol" yet. 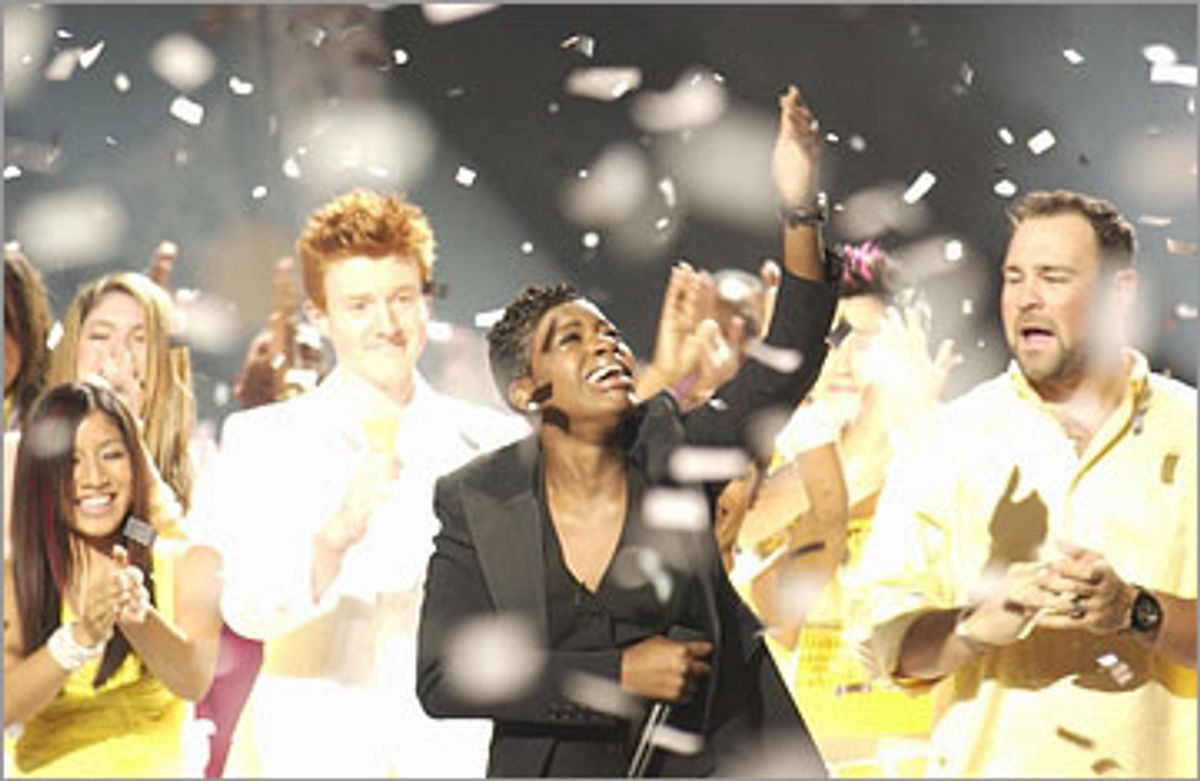 After screwing up most of the votes and sending some of the most talented contestants packing, after shaking our faith in democracy and making us wish that we were ruled by an evil tyrant -- namely the ornery but wise Simon Cowell -- America finally dismissed overrated show choir teen Diana DeGarmo and made Fantasia Barrino, the most talented and unique contestant yet, this year's winner of "American Idol."

It was great. Fantasia cried and sang and firecrackers blazed and confetti showered down and it was like the Super Bowl and "Star Search" and "Who Wants to Be a Millionaire" all rolled into one. But that was just the last seven minutes of the show. Much like the rest of the season, which is barely tolerable without TiVo's fast-forward button, 90 percent of the "American Idol" finale featured some of the most inane banter ever to be captured on the small screen -- and that's saying a lot.

The festivities featured an outdoor stage in Hollywood where many of the eliminated contestants sang (reminding us, in many cases, why they were eliminated), footage of stadiums filled with screaming fans in the finalists' home states of Georgia and North Carolina, an extended version of the usual dorky play-by-play by host Ryan Seacrest, an alarmingly amateur, horribly choreographed medley featuring this year's "Idol" contestants, and interviews with stars attending the show. To top off all of the hoopla, Jennifer Love Hewitt was on hand, MTV-style, to chatter aimlessly with whoever would have her.

Sitting through the "American Idol" finale was like watching a national championship sporting event, except that the event took place the night before, and fans were gathered merely to learn who won and to celebrate the outcome -- for approximately seven minutes. At least Simon Cowell could be trusted to say something outrageous in that matter-of-fact, sociopathic tone that tells you he's not just playing it up for the cameras.

Seacrest: What's the most difficult part about being a judge on "American Idol"?

Cowell: Uh ... The most difficult judge? Most difficult part ... Um, it's not difficult for me because I'm the one on the show -- without sounding conceited -- who actually knows what they're talking about.

Cowell's vanity is justified, since his sense and sensibility were the only things viewers could count on during the third "Idol." First there was the slightly sad popularity of William Hung, with his tone-deaf rendition of "She Bangs." Then there was the premature dismissal of two of three extremely talented African-American women, La Toya London and Jennifer Hudson, whose powerful voices put other finalists like John Stevens and Trias to shame. Then there was the disastrous all-Gloria Estefan show, in which contestants sang painfully bad hits like "Rhythm Is Gonna Get You" and "Conga" while the audience and judges winced. While Cowell has had fewer nice things to say than ever, judge Randy Jackson has appeared to be using all of his strength to swallow back the urge to proclaim the voting racist, and even Paula Abdul seemed a little off-kilter each week, replacing her usual servings of unfocused positivity with tense, emotionally overwrought haikus that neither the audience nor her fellow judges seemed to comprehend.

But one force has kept this season together: Fantasia Barrino. A 19-year-old single mother from High Point, N.C., Barrino offered consistently stunning performances with a distinct voice that sounds like a cross between Macy Gray and Aretha Franklin.

While the other contestants were on par with the stars of high school musicals, ensemble Broadway performers and the cast of Disneyland variety shows, Fantasia revealed herself to be a superstar. On Tuesday night when DeGarmo took the stage to sing "I Believe," the song written by former "Idol" finalist Tamyra Gray set to be the winner's first release, the whole thing played out like a pretty impressive number by a high school show choir. When Fantasia performed the same song an hour later, the audience at the Kodak Theater rose to its feet. Even the backup gospel singers, dressed in red robes, smiled widely and came alive, thrilled to be a part of such a great performance. Fantasia was in the zone. From the softest moments of the song to its rabble-rousing chorus, when Fantasia sang "I Believe!" all of the tackiness of the phone-elected pop star evaporated and we believed right along with her.

There are plenty of good performers in the world, but probably only a handful who come alive under the spotlight, hypnotizing everyone within a square mile: Judy Garland, Billie Holiday, James Brown, Bono, Bruce Springsteen. I still remember the first time I saw Prince perform "Little Red Corvette" on "Solid Gold." He was so intense, so unusual, his movements so self-assured and eccentric. I was maybe 8 years old, but I remember asking my older brother, "Who is that guy?" "Oh, Prince?" he said, knowingly. "Yeah, he's pretty weird." I knew immediately that he meant pretty weird in the extremely cool sense.

Fantasia Barrino is pretty weird. During many of her performances, she moves around in the audience, hunched over, not really connecting with the masses so much as having her own strange kind of fun with them. For all of her humility and thanking-the-good-Lord, Barrino has a swagger that other "Idol" contestants have lacked. Most of all, like all great performers, she locates the emotional center of a song and sinks her teeth into it. People have raved for weeks about her sublime rendition of "Summertime" from "Porgy and Bess." It's a song that's hard to hear without imagining Billie Holiday's purring voice, yet Barrino somehow managed to inject her own flavor of heartbreak and triumph into its strains. And when she sang "Chain of Fools" a few shows back, it was as if she had never heard Aretha's version at all -- she was a woman possessed, shaking and growling, her eyes rolling back in her head as she wailed that she was nothin' but a fool.

Poor DeGarmo, with her shiny pantsuits and bad hair, looks like a miniature car-rental agent onstage next to Barrino. It's incredible that anyone saw this as a competition at all. While DeGarmo pastes on her best "Up With People" face and belts out her numbers like a teenage Little Orphan Annie, Barrino inhabits the stage like the world is hers for the taking. To be fair, the contestants sing some of the most difficult pop ballads around -- many of them roam far from the average singer's range. But Barrino always seems to trust her voice, so much that she's free to play with each song, free to dance around as she feels moved to do so, free to unleash an emotional storm on the audience.

Unlike former winners Kelly Clarkson and Ruben Studdard who, for all of their talent, would never be in the spotlight without a show like "American Idol," Barrino is a natural star and a fantastic performer who richly deserves every bit of the fame and fortune that she'll get from this experience. Whether or not "American Idol" goes down in history as an absurdly fluffy, escapist diversion from these dark times, Fantasia Barrino has a gift that could make her bigger and brighter than the pop cultural supernova that created her.