Sure, it's dumb as a hard rubber ball, but this Ben Stiller comedy about the sport that traumatized us all is strangely exhilarating. 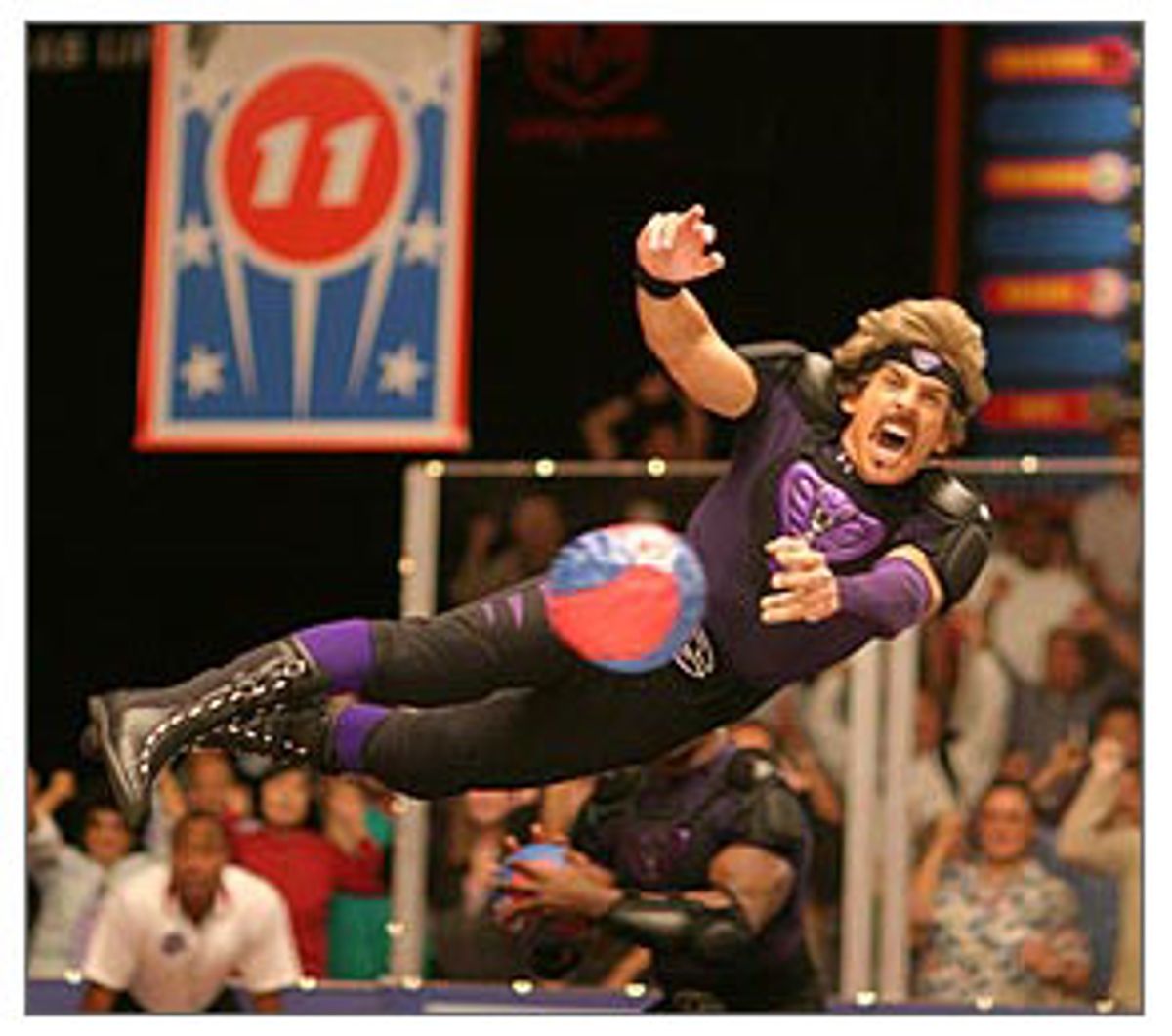 We all complain about the proliferation, especially during summertime, of dumb comedies that insult our intelligence. "We're better than this!" the rallying cry goes. "Put our brains to work -- please!"

But then, what is intelligence for, if not to be put to the test? If our brains can't take a little knocking around, what good are they? Is your mind a man or a mouse? If it can't stand the heat, it should get out of the kitchen. For the rest of us tough guys, there's "Dodgeball: A True Underdog Story."

For many of us, dodgeball wasn't just a staple of phys ed classes; it was a formative experience. Dodgeball, as you probably know but perhaps have blocked out, is a game in which teams of players face off and ruthlessly hurl hard rubber spheres at one another at supersonic speeds -- or, if you're lousy at it, at puny, pathetic speeds that will eventually cause your loserville team to get its ass handed to it, big-time. The ensuing trauma, insecurity and paranoia are potent enough to stick with an individual for a lifetime; I think many of us would freely admit that dodgeball helped make us the quivering wimps we are today.

But dodgeball is also, of course, a sport in its own right -- remember, sadism isn't just for kids! "Dodgeball: A True Underdog Story" holds the honor of being the first motion picture to capture the glory, such as it is, of the sport. The surprising thing is that it pretty much works: I'm not sure how director and screenwriter Rawson Marshall Thurber (this is his feature debut) pulls it off, but the picture has a loose-limbed, cranky energy. As its subtitle tells us, this is a story about the little guys winning against the big ones. The movie doesn't just pussyfoot around conventionality -- it hits it square in the stomach and then leaps around shamelessly in a smug victory dance. Its essential good nature (apart from a few dull-witted, crude gags that fall flat) wins out in the end: The movie goads you into believing in it.

Vince Vaughn plays Peter LaFleur, the proprietor of a rundown gym known as Average Joe's, a comfy spot for misfits who prefer hanging out to working out. A persnickety but extremely attractive lawyer, Kate Veatch (Christine Taylor), has informed him that his gym is facing foreclosure. Intoxicated by the cheap, sweaty smell of a good deal, egomaniacal rival gym owner White Goodman (Ben Stiller) moves in to take over Average Joe's and fold it into his massive, state-of-the-art Globo Gym chain. (Its slogan is "We're better than you, and we know it.")

The only way to save Average Joe's is to raise some big money, fast. So one of the gym's denizens, a bespectacled obscure-sports enthusiast (played by Stephen Root), comes up with the idea of forming a dodgeball team and taking the big prize at the national championship in Las Vegas. The beefy, boneheaded Goodman, not to be shown up (and also annoyed that Peter is making more romantic headway with Kate than he is), arrives with his own team of bigger, stronger, brawnier players.

Thurber rides the absurdity of his idea gleefully, but he also knows how to keep it in check. He gives Stiller a great look (Goodman sports a mullet and an obsessively manicured bracket-shaped mustache, as well as a wardrobe of nearly painted-on workout outfits, including an inflatable codpiece to impress the ladies). In some of his other roles, Stiller has been too hiply self-conscious to be very funny. But his over-the-top style of self-deprecating self-love works perfectly here. Poking a finger in Peter's muscular but far-less-exaggerated chest, he brags haughtily, "I've got shareholders -- you don't even have cupholders!"

Rip Torn shows up to tear it up as dodgeball god Patches O'Houlihan. (His five rules of dodgeball are dodge, duck, dip, dive and dodge.) For maximum uplift value, the picture also includes a surprise appearance by a real-life athlete who overcame tremendous personal obstacles to be a champion -- and damned if his pep talk doesn't get to you.

The final tournament scenes are filmed and edited so that instead of just being goofy (which, of course, they are), they're exhilarating too. (Although they're not quite as terrifying as the sequence in which Peter and his gang square off against a troop of vicious Girl Scouts.) The cinematographer here is Jerzy Zielinski, who also shot the marvelous, hugely underappreciated "Galaxy Quest," which Thurber cites as one of his favorite movies. "Dodgeball: A True Underdog Story" isn't nearly as expertly crafted as "Galaxy Quest," and plenty of its gags earn a zero on the scorecard. But even if the movie's brain is slightly rattled, its heart is in the right place. And Thurber has a knack for keeping things moving.

I almost wanted to be bored by "Dodgeball," just so I could prove to myself that no one could possibly make a watchable movie about my least-favorite childhood sport. Thurber proved me wrong. He played a good game, and he kicked my sorry ass. As I limp back to the library to catch up on the complete works of Nietzsche, I have to hand it to him: I just got hit by something big and dumb and it didn't hurt a bit.