As Rush Limbaugh cries foul, the Senate moves toward loosening the right-wing propagandist's stranglehold on the military's airwaves. 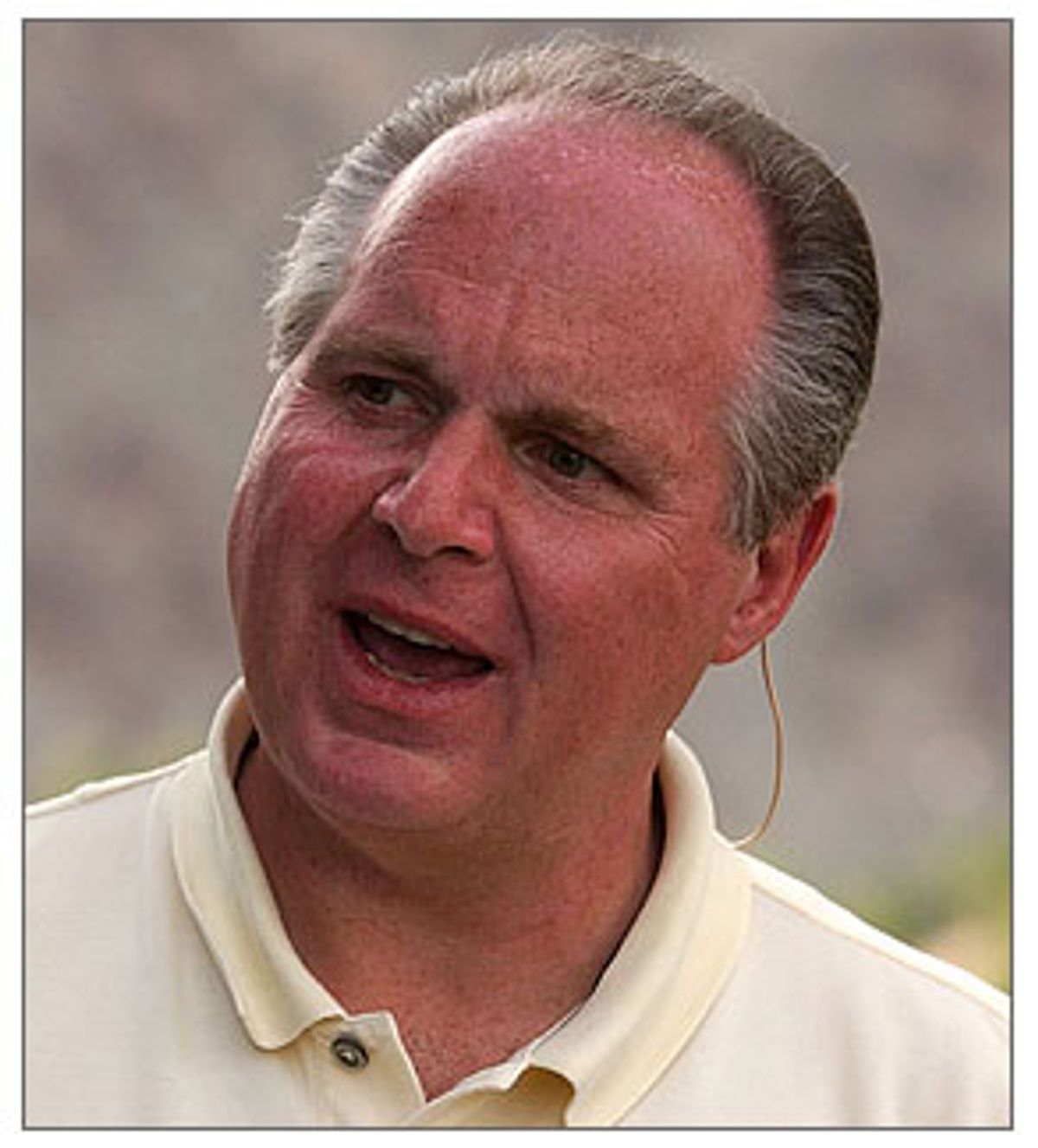 Service men and women around the world who tune in to American Forces Radio may soon be hearing a more balanced mix of political commentary -- and not exclusively the partisan rants of Rush Limbaugh. A Senate amendment introduced by Sen. Tom Harkin, D-Iowa -- passed unanimously earlier this month and attached to the pending defense appropriations bill -- calls on the Pentagon to ensure fairness and balance on the AFR network. Currently, Limbaugh's program is the only long-form political talk show broadcast daily to the nearly 1 million U.S. troops who listen to American Forces Radio in 177 countries.

"Liberals, moderates and independents contribute to funding for American Forces Radio through payment of their taxes, just like conservatives do," noted Harkin in his Congressional Record statement about the amendment. "There is no reason that American service members should receive lengthy right-wing commentaries with regularity on American Forces Radio's talk service, without some balance from competing views as part of that same service." Harkin is urging American Forces Radio to find room for a long-form liberal commentator.

Limbaugh has attacked Harkin's amendment, saying that it's akin to censorship. But in a peculiar twist, Limbaugh told listeners on his June 18 show a self-aggrandizing tale about how a senior Republican senator had stepped in on his behalf and helped scuttle Harkin's proposal -- an account the senator's office flatly denies.

Salon first brought the issue of Limbaugh's exclusive alliance with American Forces Radio to the forefront in a May 26 article, which noted that Department of Defense guidelines state that "all [American Forces Radio] political programming shall be characterized by its fairness and balance." Additionally, the guidelines stipulate that "great care should be shown" by American Forces Radio during election years to provide fair and balanced programming and commentary. (During the 2000 Florida recount, overseas military ballots helped provide President Bush with his slim margin of victory.)

"It's clear American Forces Radio, which is completely supported by taxpayers, does not have the political balance that it is required by federal dictate," says Tom Athans, executive director of Democracy Radio, a nonprofit corporation in Washington that promotes political diversity on the airwaves.

Other critics believe that, in light of the Abu Ghraib prisoner abuse scandal, which Limbaugh likened to nothing more than what takes place during a Skull and Bones initiation at Yale, his program no longer deserves the honor of being carried on the federally run radio network.

Last month, Media Matters for America, a new Web-based research center, launched an online petition drive urging Secretary of Defense Donald Rumsfeld to take Limbaugh's show off American Forces Radio. To date, the group has collected approximately 30,000 signatures. Unlike Harkin, Media Matters does not think the solution is to find a liberal to counterpunch Limbaugh. "I don't believe there is such a thing as balance to Rush Limbaugh," says David Brock, Media Matters' president and CEO. "One cannot balance somebody lying and smearing every day the way he does."

American Forces Radio, formerly known as Armed Forces Radio, was created by the War Department in 1942 to improve troop morale by airing popular American programs overseas. A television service was added in 1950. Today, the radio network offers an impressive and eclectic range of options, from live sports telecasts to news from CNN, ABC and others; NPR long-form shows ("Car Talk," "Morning Edition"); and country, rock and pop music programming. But Limbaugh, who often equates Democrats with terrorists, gets the only one-hour slot devoted exclusively to partisan political talk.

American Forces Radio programmers insist Limbaugh is carried because of his huge ratings at home, and that if a liberal talker drew the same large audience he or she would be added to the lineup. However, American Forces Radio officials say that Howard Stern, whose show reaches 8 million listeners each week and who has launched a left-wing "radio jihad" against the Bush administration, is off-limits to the military audience because of the sometimes strong sexual content of his show.

Often returning to the topic on-air, Limbaugh appears stung by the criticism over American Forces Radio as well as by the heat he has taken for his commentary about Abu Ghraib and the first photos seen of the abuse. He recently told Time magazine that his comments were "totally misinterpreted and taken out of context." Here are some of those comments in their original context:

Last week, while attacking Harkin's American Forces Radio amendment, Limbaugh opted for misinformation, telling listeners the senator's proposal was designed to "to get this program stripped from that network." Yet in his Congressional Record statement, Harkin specifically noted: "I am not calling for American Forces Radio to pull Rush Limbaugh's commentaries from their talk radio service."

That Limbaugh would misrepresent Harkin's public statements is not surprising in view of his many other deceits. For instance, on June 17, he told radio listeners that the 9/11 commission had found "that [Sept. 11 mastermind] Mohammed Atta did meet with an Iraqi intelligence agency, or agent, in Prague on April 9th of 2001." In fact, the commission found the exact opposite: "We have examined the allegation that Atta met with an Iraqi intelligence officer in Prague on April 9. We do not believe that such a meeting occurred."

More puzzling, though, was Limbaugh's apparent decision to fabricate a story involving Sen. Ted Stevens, R-Alaska, the powerful chairman of the Senate Appropriations Committee. Discussing American Forces Radio during his June 18 program, Limbaugh told listeners, "He [Stevens] sent me a fax today with a revised [Harkin] amendment. They've gone in and they fixed the amendment. They -- they've watered this thing down. Whatever the Harkin amendment was, it now doesn't mention my name."

According to Stevens' spokeswoman, Courtney Schikora, the senator did call Limbaugh and fax him a copy of the Harkin amendment. But neither Stevens nor anybody in his office sent the host a "revised" amendment, "watered" it down or removed Limbaugh's name. The last part would have been impossible, in any case, because Harkin's proposal never mentioned Limbaugh. Schikora adds that Stevens does not oppose or want to alter Harkin's amendment, since it simply reaffirms the network's existing mission, specifically regarding fairness and balance.

Nonetheless, on June 18 Limbaugh seemed to relish recounting the now-disputed encounter with Stevens: "I called him and because Ted Stevens is the senator from Alaska. Stevens did something yesterday to revise this and he sent me the -- well, the -- the -- the -- the new amendment. And he said, 'Is this OK?' He said, 'Do you have any objections to this?' [laughter] And I -- I looked at it and said, 'Am I allowed?' [laughter] 'Am I allowed to object to an amendment to the defense appropriations bill when I'm not a senator?' I mean, I can as a -- as a citizen, obviously, but, I mean, any citizen could object. Doesn't matter."

Even some of Limbaugh's closest watchers were struck by the strange tale. "It's an extremely curious thing," says Media Matters' Brock, the author of "The Republican Noise Machine: Right-Wing Media and How It Corrupts Democracy." "We've documented a lot of things Limbaugh has said that are false and wrong. But this seems to be on a slightly higher level: making up a story about a sitting, powerful Republican senator, and one that makes him look bad. That's asking for trouble. Of course somebody's going to check it out."

After the July 4 congressional recess, Harkin is set to meet with Pentagon officials to discuss his broadcast concerns. His spokeswoman says preliminary talks with American Forces Radio have been "very friendly," with officials expressing a willingness to resolve the issue. Perhaps the network will soon make room for a liberal voice.