The rise and fall of Jack Ryan

Do the sex lives of our politicians have to be strictly vanilla? 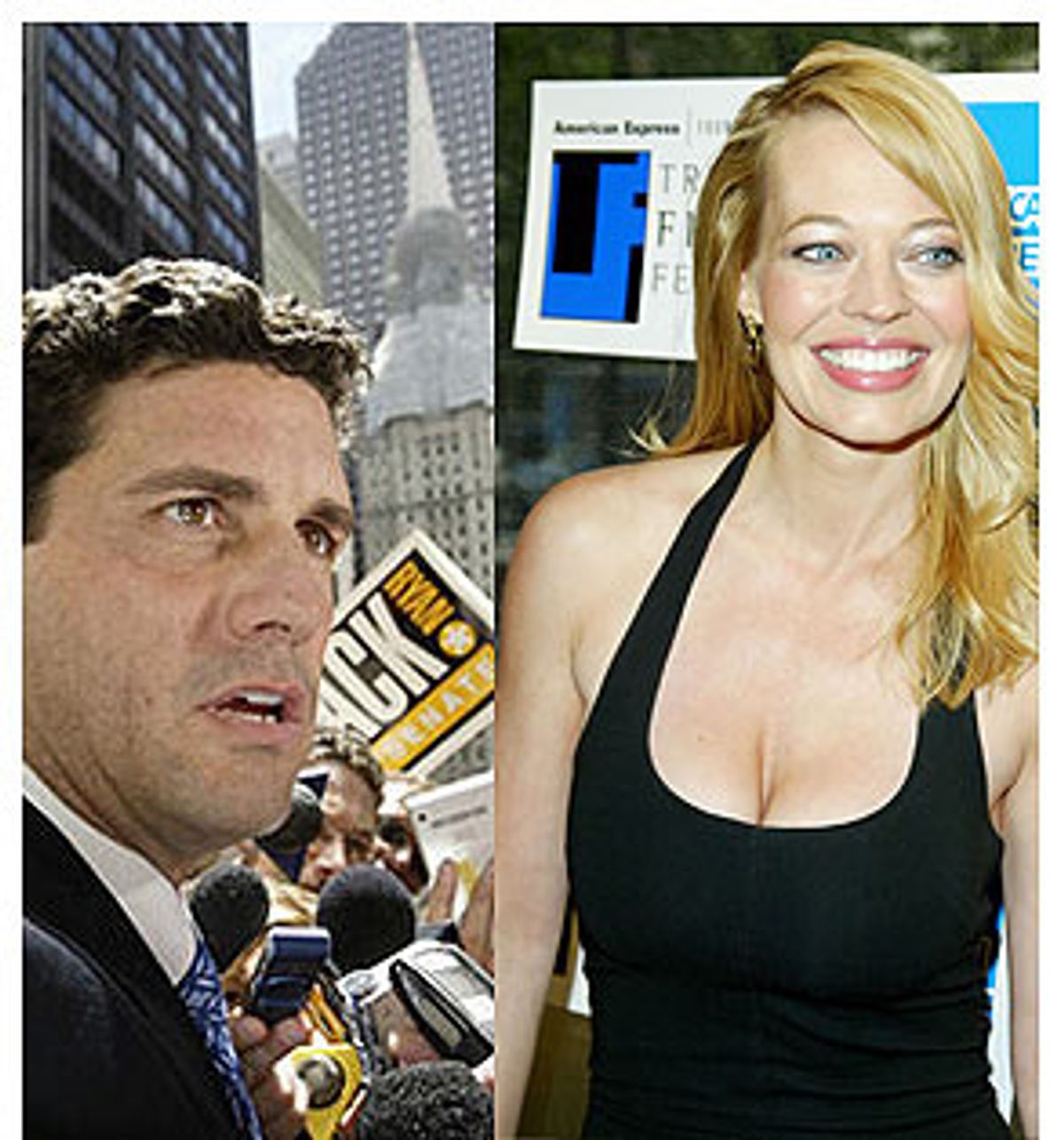 Politics is a cruel mistress. If Jack Ryan were a masochist instead of an exhibitionist, he might be having the time of his life right now. The 44-year-old Illinois Republican is the latest politico to taste scandal's lash, and it's left the poor guy battered and bruised. In fact, the multimedia drubbing has cost the Harvard-educated aspirant and millionaire his senatorial bid: Friday, the AP announced that he has withdrawn from the Illinois Senate race.

Sucks to be him.

It all started Monday when Ryan's divorce records were unsealed. His ex-wife, "Boston Public" and "Star Trek: Voyager" actress Jeri Ryan, 36, alleged therein that during their eight-year marriage, Mr. Ryan took her to sex clubs in New York, New Orleans and Paris. Ms. Ryan claims her then-husband encouraged her to engage in sexual activity with him while another couple watched. Eager to protect his self-interest, his career and his 9-year-old son, Mr. Ryan denied her claims, calling them "ridiculous" and "smut," but still, the flames were fanned on this scandale erotique, and Ryan's political career just might be over for good.

Ask your average, everyday sexpert how Ryan's alleged exhibitionist streak ranks on the 1-to-10 kink scale and they'd give it a blasé 5. But by milquetoast network media standards, it's pretty hot stuff. Throw a foxy celebrity wife into the mix, and you've got all the makings of a month's worth of wire stories and late-show monologue jokes. What makes it so fascinating? Is it the whiff of coercion? The frisson of kink? The thought of a parent having a non-procreative sexual urge? No. The Triple-X factor that takes this peccadillo over the top is that Ryan is a politician. The much-manicured image of the political type is clean-cut and old-fashioned -- the earnest cowboy, the forthright soccer dad, the buttoned-up do-right kind of guy. His presumed position in sex? Strictly missionary.

There's always petitioning from the sexual fringe to be out with one's erotic whims, whips, chains and all, but such open-book policy never works outside the utopian bubble of, say, a liberal arts college, the Omega Institute or Santa Cruz, Calif. That privacy carries the day is largely for the good; there's an integrity and dignity to sexual discretion that anyone can appreciate. The downside, however, is that we have very little idea of what kind of sex "normal" people desire and have (plenty of which falls outside the missionary zone). This basic ignorance is the agar in which sex scandals are grown. If it were common knowledge that yes, even accomplished, ambitious men (and women) on the Hill might favor sexual experimentation, then maybe we could focus on what really matters. Desire isn't partisan, kink knows no party line, and neither is germane when it comes to gauging one's leadership potential.

For such a sex-obsessed populace, Americans are oddly prudish when it comes to politics. We're always shocked, shocked to hear some libidinal blip from Washington. (Maybe because wonks and politicos look so unsexy, all neckties, immobile anchor-dude hair and pit-stained campaign trail button-downs. And those ladies in their serious suits. Bleah. It's the one uniform we haven't fetishized -- perhaps for good reason.) But the whole "No sex, please, we're politicians" shtick is constantly sent-up as the farce that it is, from Monicagate to books like Shawna Kenney's "I Was a Teenage Dominatrix," in which Ms. Kenney works her way through American University on the latex catsuit plan (with some high-profile D.C. clients), to the blogging of Washingtonienne, (aka Jessica Cutler), in which the young aide to Republican Sen. Mike de Wine chronicled her sometimes-paid liaisons with various Beltway types. Given the abundance of evidence to the contrary, it's hard to believe we cling so tightly to the mutually agreed-upon fiction that the power of politics remains beyond the reach of the power of sex. As if the American public were 280-plus million lily-whites rendered apoplectic by the very idea of sexual diversity. As if Capitol Hill were as chaste as a convent. As if one must be Boy Scout-pure to kick ass in public office. (Hello, Jefferson. Hello, JFK.)

If this were the story of an abused or betrayed ex-wife, that would be one thing, a mark on Mr. Ryan's character that would be of some political merit. ("If that's how a politician treats his wife, how might he treat his constituents?") But Ms. Ryan has stated that neither she nor her son was physically harmed, she believes Mr. Ryan was faithful during their marriage, that he is "a good man, a loving father" and that she has "no doubt that he will make an excellent senator." Sounds like the sex-club fiasco was basically a case of incompatible taste, with some ham-handed clueless guy "encouragement" tossed in. Mr. Ryan was right to point out that he didn't break any laws, any vows or any Commandments. Sure, his oafish, coercive behavior (if allegations are true) could destroy a marriage. But should mere allegations of same destroy a career?