Tobey Maguire and Kirsten Dunst are back, but this sorta square Spidey movie doesn't swing. 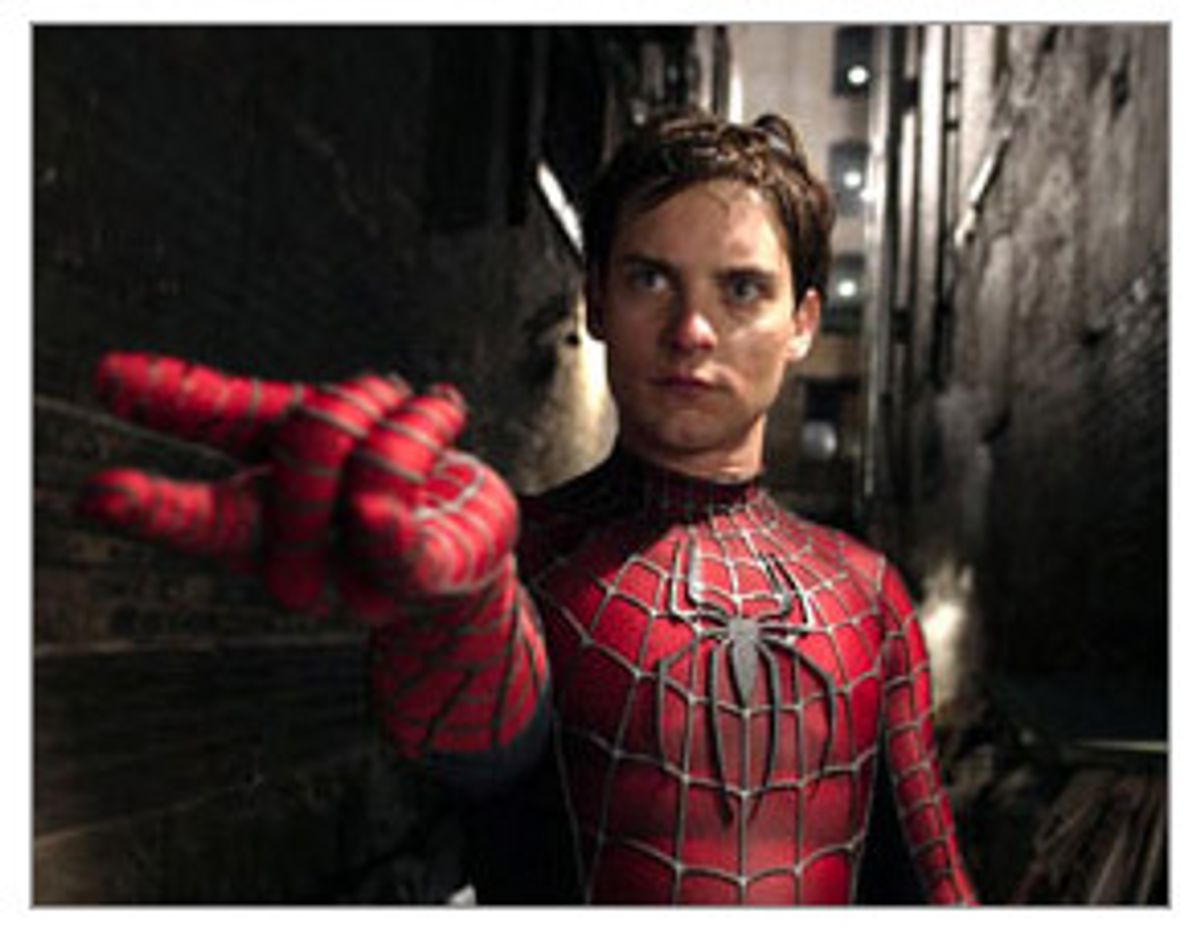 If you're going to make adolescent self-pity the heart of a movie -- and you're not going to parody it -- then it should be so masochistically self-involved that it becomes a rapturous wallow. (That's the brand of hysteria Elia Kazan whipped up in his roaring-hormones classics "East of Eden" and "Splendor in the Grass.")

"Spider-Man 2" is too square to take that approach, and not imaginative enough to take any other. For a big-budget action movie "Spider-Man 2" is modest and not assaultive -- it has a boring decency. The pokiness of the first "Spider-Man" was forgivable because the picture had a sweet spirit and because it was unusual to see an action blockbuster that wasn't out to bonk you over the head every few minutes. It was also almost immediately forgettable. (About all I retain from it is Kirsten Dunst mugging as she poses for Tobey Maguire in the first scene, and their later kiss in a rain-drenched alley as he, in Spidey drag, hangs upside down.)

Like its predecessor, "Spider-Man 2" was directed by Sam Raimi. For a filmmaker who has spent much of his career dealing in the fantastic, Raimi is awfully prosaic. His best movie remains the overlooked heartland noir "A Simple Plan," which showed what Hollywood used to call an "invisible" command of craft and narrative; the movie also felt as though it had been made for adults. Those same qualities were present in Raimi's paranormal thriller "The Gift." The plot was Southern-gothic trash, but the details and sense of place felt authentic and, as in "A Simple Plan," Raimi took real care with the performances.

But in his outright genre movies, like the western pastiche "The Quick and the Dead" and the comic-book adventure "Darkman," Raimi has never escaped a B-movie flatness. That quality worked to the advantage of the best of them, the giddy horror slapstick "Evil Dead 2: Dead by Dawn." The B-movie cruddiness gave the racing camera and the stop-motion dancing corpses something to bounce off.

The "Spider-Man" movies are genre pictures writ large (or at least expensive). Raimi is a capable director who I don't think has ever demonstrated a crass impulse, but he just doesn't have the excess of spirit, sense of grandeur, and flights of poetic imagination that a comic-book extravaganza needs.

In "Spider-Man 2" he shows flashes of a nasty, wild streak. One character exits the movie in a hail of flying, jagged glass. We see her screaming face reflected in the approaching shards. It's a terrific image, obviously an homage to Carrie Snodgress' death in "The Fury." But that flying glass needs to cut the movie's flesh (and ours) as well as the character's, and the death is too easily forgotten. Like all the best effects in the movie, it's muffled.

There's a promising villain this time out. Dr. Otto Octavius, aka Doc Ock and played by Alfred Molina, is the proverbial good scientist turned evil -- in this case when experiments to develop an alternative energy source leave him with four mechanical tentacles embedded in his spine, each doing his telepathic bidding. They're quite a sight, with their snapping jaws open like a rattler ready to strike, and there's a purring menace in the way they coil around Molina like familiars. Doc Ock can use those metallic arms to crawl up buildings or to hoist himself into the air, and I wanted to see those crazy arms do more inventively meaner things -- as well as to see Molina get a few arias to sing the mournfulness driving Doc Ock's rage.

With their mixture of the organic and the mechanical, those arms would have been catnip for David Lynch or Guillermo del Toro (whose "Hellboy" has all the grandeur, poetry and romance missing from "Spider-Man 2") or perhaps even David Cronenberg (if he had a sense of humor). But after he's established as a character, Doc Ock is pretty much absent until the last half-hour, when the filmmakers seem to suddenly remember they need a villain and bring him back.

There's a good moment when a group of New Yorkers try to protect Spider-Man by telling Doc Ock he's going to have to go through them first. He uses his mechanical arms to shove them out of his way. Couldn't he have done away with even one innocent bystander to give the movie a jolt? This is an adventure without cunning or bloodlust, a fairy tale without any of the lyrical cruelty that gives fairy tales their primal power. Even when Doc Ock unleashes those fiendish arms in an operating room on a surgical team trying to remove them, there isn't a drop of blood to be seen.

The screenwriter, Alvin Sargent, wrote the scripts for "Ordinary People" and "Julia." That's blame enough for one lifetime, but Sargent can't get off scot-free here. "Spider-Man 2" is packed with incidents, but it's a pileup rather than a plot. The script, from a story by Michael Chabon and the team of Alfred Gough and Miles Milar, is supposed to be about how Peter Parker (Tobey Maguire) learns to live with the burden of being Spider-Man -- that is, how a young man learns that adult life means compromise. It plays less like the education of a hero than like the tale of a young man so self-absorbed you have a hard time believing there's anything heroic in him.

"Spider-Man 2" picks up two years after the first movie ends. Peter is struggling to balance his duties as Spider-Man and his life as a college student, and failing miserably. Scraping by on next to no money, he has a shabby one-room apartment (the landlord who's always dunning him for back rent is played by the wonderful Elya Baskin, whose bulging eyes and rough manner suggest what Charlie Chaplin's nemesis Eric Campbell might have done had he spoken onscreen). He's given up pursuit of the girl he loves, Mary Jane (Kirsten Dunst), because he fears his identity as Spider-Man will endanger her. Peter's best friend, Harry (James Franco), who blames Spider-Man for the death of his father (the first movie's villain, the Green Goblin), resents what he believes is Peter's friendship with Spidey. And Peter's dear old Aunt May (Rosemary Harris) is about to be tossed out of her Queens home because she can't pay the mortgage.

Some of the details in that buttload of misery don't add up. I understand that college is the time to cut the apron strings, but I couldn't figure out why Peter gives up his room in Aunt May's house for a rat hole in the city -- especially when his contribution could help her pay the mortgage. (Harris is stuck with the movie's worst lines, but she has one good moment when she lashes out in anger at Peter for trying to refuse the 20 bucks she hands him for his birthday; you feel her resentment at being an old woman in straitened circumstances.) When we find out that M.J. is engaged to the son of Spidey's nemesis, newspaper editor J. Jonah Jameson, is it just laziness that keeps Sargent from including a scene between M.J. and her prospective father-in-law? (Once again, J.K. Simmons is so much like what you expect Jonah Jameson to be from the comic book that he gets a laugh nearly every time he opens his mouth.) And when we find out the reason Peter's web-slinging powers are so erratic, it's a cheat.

And it's a cheat that reflects the particular wimpiness of the movie. There's less torment than sheer late-adolescent petulance in Peter's decision to stop being Spider-Man. When Superman gave up his powers in Richard Lester's wonderful "Superman II," it was so he could love Lois Lane as a mortal. Peter's decision is ... 'cause it interferes with his course load. And Superman consciously chooses to give up his powers. Peter doesn't give up a thing. The only sacrifice he makes is to toss his Spidey costume in a trash can. How are we supposed to look at him as a hero after he walks away from a guy being mugged in an alley? Raimi frames Maguire in the forefront of this shot so we can see how badly Peter feels. (If you think he feels bad, think about that poor son of a bitch in the alley.) Christopher Reeve walked away from a bully in "Superman II," but it was only Clark Kent that the tough was picking on.

The only thing that comes together in "Spider-Man 2" are the shortcomings of Raimi, Maguire and Sargent. The script's miscalculation of Peter's decision feeds into the pedestrian quality of Raimi's direction and into Maguire's weightlessness. That's not something I would have said about him in any other movie. The thing that's been great about Maguire is the lovely lost quality he has. But here he simply does not suggest a heroic presence, not even the smart-ass daredevil quality Spidey has in the original comic books.

If Maguire seems out of place here, so does Dunst. As M.J., Dunst seems to be possessed of a held-in resentment whose source and whose target you can never quite figure out. Something in this performance reminded me of Cindy Williams' spiky performance as a prefeminist teen queen in "American Graffiti." Like her, Dunst appears to be chafing against strictures she cannot articulate. There's zero chemistry between Maguire and Dunst. You keep wondering why Peter is making himself miserable chasing after her when two other young women in the movie are much more alluring -- Elizabeth Banks with her ghost of a dirty grin, as Jameson's secretary, and Mageina Tovah as his landlord's daughter, a big-eyed beauty teetering right on the cusp between duckling and swan.

The longing and desire that should be bubbling up between Maguire and Dunst in the whole movie finally comes to the surface in the climax -- which only makes you wonder where it was for the previous two hours. (And why, oh why, when Raimi gets the two of them nestling in a spider web strung above the city, doesn't he allow them some time to canoodle?)

As before, there are lots of shots of Spider-Man swinging through the canyons of Manhattan and, as before, despite all the millions spent on the movie, they look cheap. (Spidey in particular has the unreal look of a computer-animated figure set against a backdrop into which he has not been adequately blended.) Raimi doesn't allow us time to bask in the beauty of traveling through the city that way; he's too busy whipping us close to buildings and around corners. But you can guess why he wants those shots in there. They're the only place where the movie swings.