The horror, the horror

David Foster Wallace delves into the heart of human darkness in his chilling new story collection. 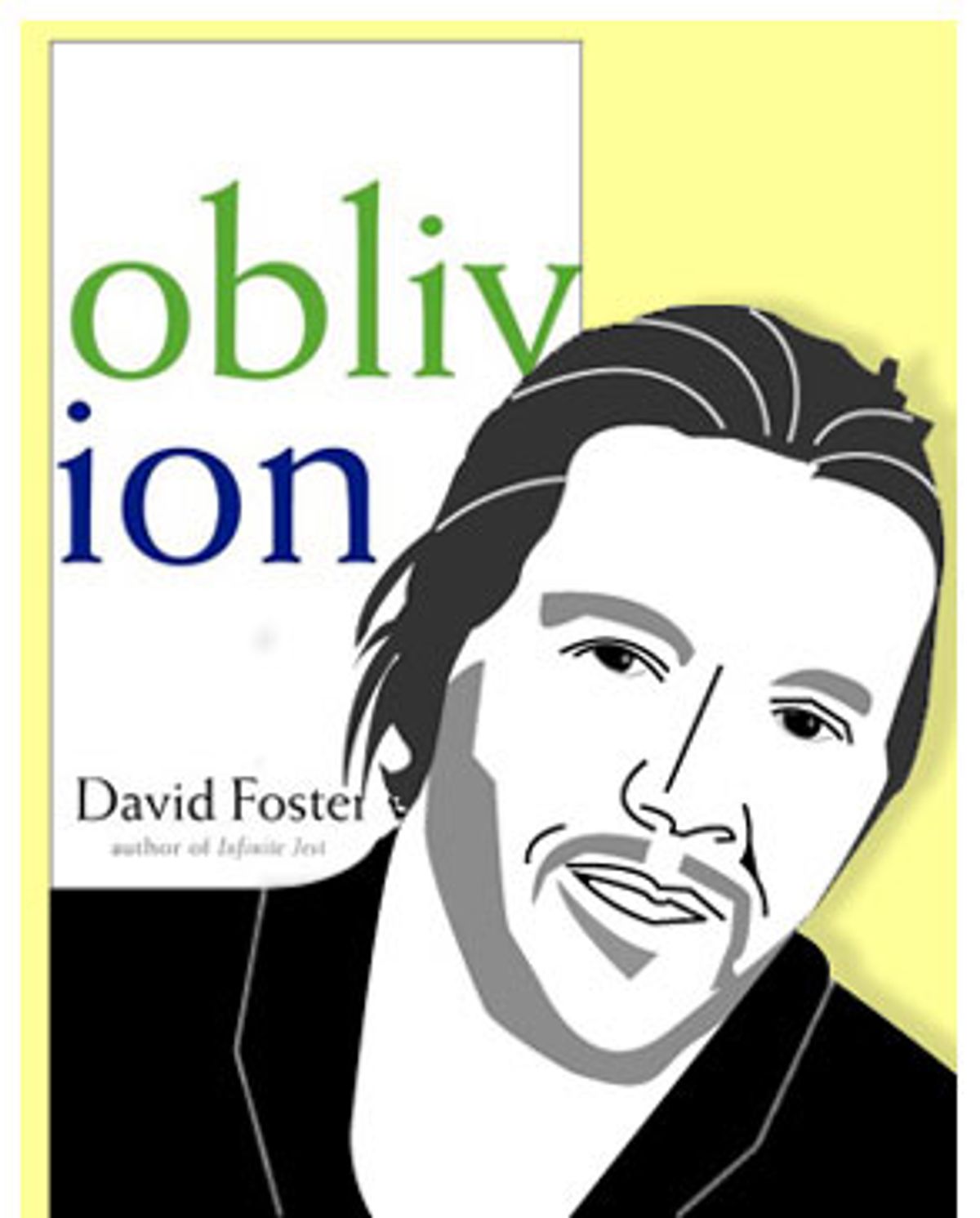 With his new story collection, David Foster Wallace has perfected a particularly subtle form of horror story -- so subtle, in fact, that to judge from the book's reviews, few of his readers even realize that's what these stories are. The oblivion in this collection's title is what most of his characters are after. They have a past they want to forget, a future they'd prefer to avoid, and things about themselves they'd rather not think about at all. When you find out what they're running from, you can't blame them.

Wallace can still be funny, but his humor has been creeping away from the playful, omnivorous sort on display in his first three books ("The Broom of the System," "The Girl With the Curious Hair" and the reputation-making novel "Infinite Jest") and toward a bleaker variety -- as if he were making a slow switch in allegiance from Thomas Pynchon to Samuel Beckett. His style remains maximalist, but his focus has narrowed and deepened. "Infinite Jest" seemed a bulgy monster, a gathering of enthusiasms that were always threatening to escape the corral of the novel and go feral. "Brief Interviews With Hideous Men," the story collection that followed it, was a grab bag of experimental vignettes and more-conventional efforts that nosed around the problem of human malice. "Oblivion," by contrast, is of a piece, relentlessly trained on the things people do and say to bear the unbearable.

Trauma lurks somewhere, usually offstage, in each of the eight stories collected in "Oblivion." In some, it hasn't happened yet; in others the narrator never quite gets around to describing it. Possibly, this is Wallace's response to Sept. 11, although the terrorist attacks directly shadow only the final story, which is partly set in a World Trade Center office in July 2001. Nevertheless, the possibility of brutal and often meaningless catastrophe hangs over all the characters here. Something awful, for example, is likely to happen to the market research focus group described in "Mr. Squishy," the first story, though exactly what remains unsettled. Be that as it may, Timothy Schmidt, the character at the story's center, a "thunderingly unexceptional" focus group facilitator nursing a hopeless love for a married co-worker, already finds his life pretty dreadful.

Wallace revels in professional jargon and takes a transparent, boyish delight in knowing how things work, which is why "Mr. Squishy" isn't just another flabby diatribe about the stupidity of advertising. Instead it's a half-awestruck speculation on the fiendish brilliance of advertising that probably gives the field too much credit.

The company for which Schmidt works seethes with more intrigues and counter-intrigues than John le Carré's Circus: Schmidt knows that his focus group doesn't know that it's the subject of a study of how behind-the-scenes knowledge of a marketing campaign affects a consumer's experience of the marketed product. But what Schmidt's supervisor knows (and Schmidt doesn't) is that the group itself will become the subject of an advertising campaign about the difficulty of selling a "labor-intensive ultra-gourmet snack cake" called "Felonies!" And what Schmidt's supervisor doesn't know is that his supervisor has set the whole thing up (including a staged disaster) in order to study the focus group facilitators themselves as part of a plan to eliminate them from the realm of market research, along with "all the infinite ephemeral unnoticeable infinite ways human beings always kept impacting each other and muddying the waters." But what none of these puppet masters knows is that the disillusioned Schmidt has plans of his own.

The more you know, the greater either your malevolence or, more likely, your despair; even Socrates' maxim has become a curse. The narrator of "Good Old Neon" (another ad man) is smothering in self-awareness. "My whole life I've been a fraud," he announces, relating a history of triumphs, each one curdled by his consciousness that "all I've ever done all the time is try to create a certain impression of me in other people." Admitting as much to a psychoanalyst only leads him to further spasms of self-loathing: "My confession of being a fraud and of having wasted time sparring with him over the previous weeks in order to manipulate him into seeing me as exceptional and insightful had itself been kind of manipulative."

This dilemma, in which every layer of self-knowledge is nested inside yet another layer that scrutinizes it mercilessly for inauthenticity, is a Wallace trademark. When, not surprisingly, these contortions drive the narrator of "Good Old Neon" to suicide, he is revealed to be a childhood acquaintance of "David Wallace," and the story itself an effort to imagine his inner life on the part of Wallace, who has recently "emerged from years of literally indescribable war against himself." This, of course, suggests that all of "Good Old Neon" is merely Wallace's solipsistic effort to attribute his own miseries to a man who might have killed himself for entirely other reasons.

It's easy to conclude that the suicide speaks for Wallace earlier on, when he ruminates on the inability of language to convey "the most important impressions and thoughts in a person's life" because "what goes on inside is just too fast and huge and all interconnected for words to do more than barely sketch the outlines of at most one tiny little part of it at any given instant."

This is what Wallace has tried to do in much of his fiction, using footnotes (which his dimmer critics have interpreted as mere postmodern smart-alecking) or, in these stories, parentheses and brackets. He wants to show how a great web of inchoate feelings and trains of thought and immanent understandings of multiple situations is operating in any person at any point in time. The breadth of human consciousness can never be squeezed through the narrow aperture offered by one word at a time without distortion or oversimplification or, basically, the expenditure of lots and lots of "English." "It's interesting," says the narrator of "Good Old Neon," "if you really think about it, how clumsy and laborious it seems to be to convey even the smallest thing."

But don't assume that conveying such truths is the point of Wallace's prolixity, with all its deliberate clumsiness and overt laboring. (Perhaps it never was, or perhaps it just isn't anymore.) The proliferating sentences in "Oblivion," spinning off in tendrils of subjunctive clauses and multi-line parentheticals and often extending over several pages, are like the metastasizing digressions of the narrator of "The Soul Is Not a Smithy." He claims to be setting the record straight on a violent episode from his childhood, in which he and three classmates were allegedly held hostage by a deranged substitute teacher. He never quite gets to it, so preoccupied does he become with describing the preoccupations that distracted him from the event when it was happening. The story that he was imagining at the time (visualizing it in the panes of the schoolroom window as if they were panels in a comic book) is a pathos-drenched domestic saga of a blind girl and her lost dog, but it is stained with the boy's inklings of his own father's wretchedness, and perhaps that of the teacher as well.

In "Oblivion," Wallace's long arcs of prose and the narrative sidetracks are exposed not as tortuous strivings toward some hard-won truth but as an insulation that people spin between themselves and the sharp edges of their condition. Those readers who dislike Wallace's fiction (and unfortunately, quite a few of those who like it) see him as swanning around in the finery of his intelligence. Here, at least, he is wrestling it to the ground. What the eddying subplots and the satires of glossy magazine editors and the recipes for biotoxins and the mini-exegeses on statistical sampling and the meticulous portraits of Midwestern budget hotel chains do for the characters in these stories is provide a padding around the traumas at the stories' centers, which are always some form of mortification, in both old and recent senses of the word. Mortification -- of the body, the ego or the conscience -- is oblivion's opposite, a kind of tormented knowing that destroys all peace.

Only one story in "Oblivion" is a straightforward depiction of such mortification: the scalding of a toddler and his parents' anguished and inept efforts to rescue him. It is very short, and it's nearly unendurable. It is the thing itself. It ends with the child "having learned to leave himself and watch the whole rest unfold from a point overhead, and whatever was lost never thenceforth mattered, and the child's body expanded and walked about and drew pay and lived its life untenanted, a thing among things, its self's soul so much vapor aloft, falling as rain and then rising, the sun up and down like a yoyo." The quote gives a sense of how Wallace might write if he were aiming for conventional beautiful prose (though other lines -- "the dream's bright room was death" and a description of a flock of starlings as they "spread and contract like a great flexing hand against the downtown sky" -- do that even better) instead of conjuring up the thickets of words and ideas and stories, awkward or artful, that people use to shield themselves from and to live with what happens in "Incarnations of Burned Children."

The collection's final story, "The Suffering Channel," presents two confrontations between culture and the raw facts of bodily existence. One is the titular channel, an outfit specializing in real footage of people in agony (physical and emotional), a concept so grotesque it seems both outlandish and likely to show up on your cable provider's menu in a year or two. The other is a man who uses his bowels to shape his feces into works of art; they emerge fully formed. Some critics have dismissed the latter as an unforgivable descent into potty humor, which to be fair is partly Wallace's fault although probably not his intention. (The characters find the "pieces" genuinely beautiful and meaningful; the story just isn't very successful at making that felt.)

Each of these creations is obscene, but why? Shit and pain, the bedrock unavoidability of both, are the stuff of life itself, after all. Culture, whether it's art or entertainment or the fiction of David Foster Wallace, can deal with both, but it can't, in any viable way, literally be either one. Instead, it's what we put between ourselves and those intolerable facts, the middle ground we make between mortification and oblivion.