The neocons are fuming, but the choice of Ghazi al-Yawar as Iraq's interim president may be one of the White House's few smart moves. 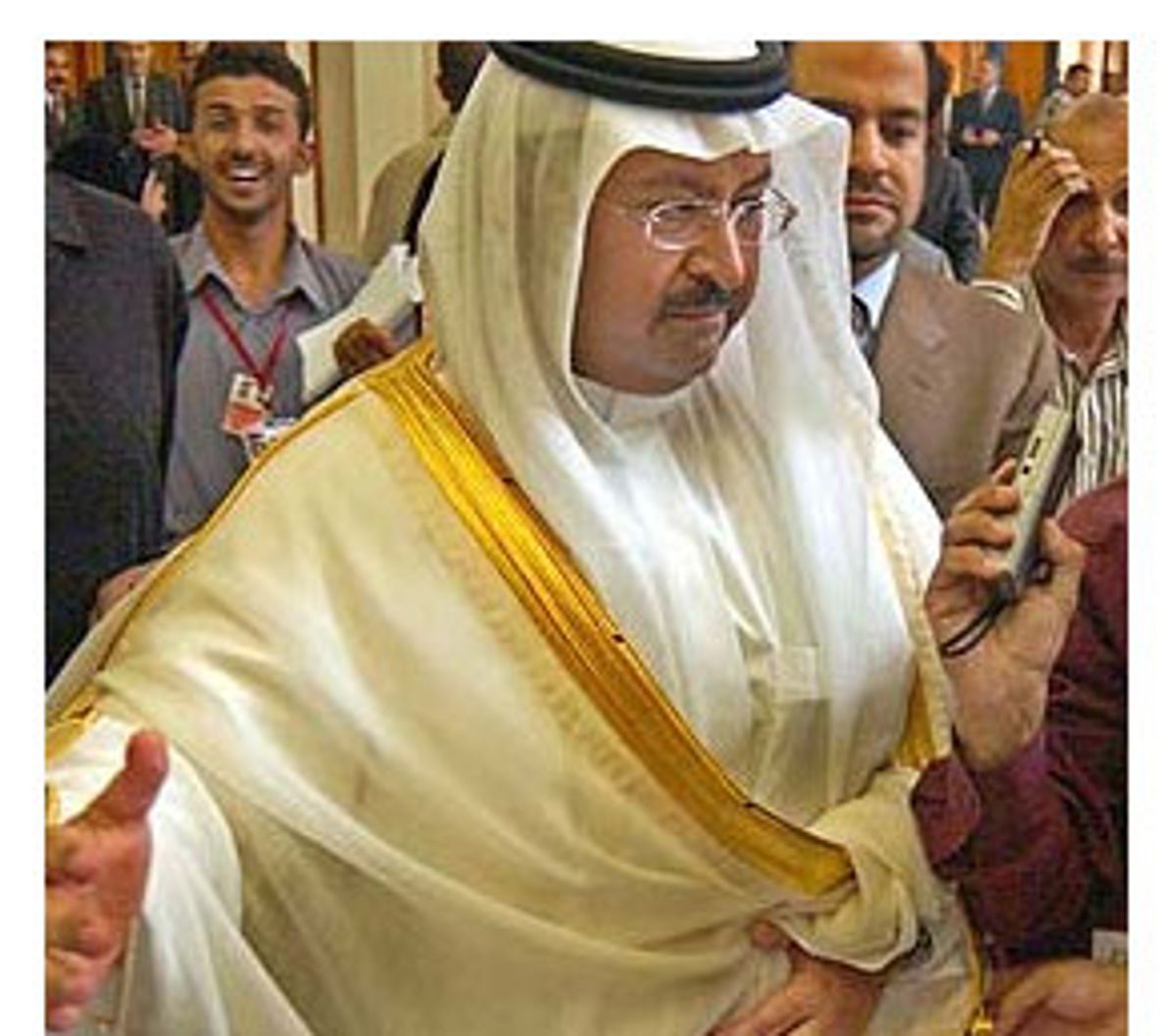 The interim Iraqi government is only four days old, yet numerous challenges already threaten to undermine its success. The infamous Abu Musab al-Zarqawi -- a Jordanian militant believed to be connected to at least two beheadings of foreigners -- has declared open season on senior officials, including a plan to assassinate interim Prime Minister Iyad Allawi. Continued devastating attacks like the ones last week by suspected Sunni insurgents in five cities across the country left hundreds of Iraqi citizens dead or injured. Sheikh Ghazi al-Yawar, the interim president, who is less familiar to people outside Iraq than Allawi is, is one government official whose credibility with political and religious leaders in the region offers a glimmer of hope for the achievement of stability in the months ahead.

As I watched the new Iraqi government take shape last month, I couldn't help noticing that the person with a cherubic face smiling serenely beside U.N. envoy Lakhdar Brahimi wore garb much like that of a member of the Saudi royal family. He was wearing a bisht, the traditional black robe with gold trim that is de rigueur for senior royals, big-time businessmen and some religious leaders. One Saudi friend described the outfit as "a cross between a tie and a business suit." Another Saudi noted that his iqal, the Sunni headdress also common in the Arabian peninsula, was jauntily tilted at the same angle as Saudi Arabian Crown Prince Abdullah's.

The new president of Iraq not only dresses like a Saudi but carries a Saudi passport, was educated in Saudi Arabia, is married to a Saudi (from the same al-Rasheed tribe that the crown prince's mother belongs to) and sends his four children to study in the kingdom. Is it any surprise that the Saudi government was among the first to congratulate him on his new position? President Bush may have thought his staff had goofed when they introduced him to Iraq's new leader at the G-8 summit in Sea Island, Ga., two weeks ago -- peering around Yawar's generous form to see if an Iraqi was lurking somewhere.

The neoconservatives' master plan for the Middle East included the occupation of the kingdom's oil fields if necessary, but not occupation of the Iraqi presidency by a Saudi. As the United States took control of oil fields and established military bases in Iraq, Saudi Arabia was supposed to become geopolitically less important to the United States. Earlier this year, Max Singer, founder of the right-wing Hudson Institute, suggested that "Saudi Arabia is vulnerable not only to a U.S. seizure of their land but to U.S. unofficial participation in a rebellion by minority Shi'a in the Eastern Province." The Wall Street Journal heralded this neoconservative view in a Jan. 4, 2001, Op-Ed in which author Ralph Peters wrote: "We must be prepared to seize the Saudi oil fields and administer them for the greater good. Imagine if, instead of funding corruption and intolerance, those oil revenues built clinics, secular schools and sewage systems throughout the Middle East. Far from being indispensable to our security, the Saudis are a greater menace to it than any other state, including China."

Perhaps Libyan leader Moammar Gadhafi thought that he too could participate unofficially because of his alleged plot to assassinate Crown Prince Abdullah, a move that would certainly create enough of a threat to U.S. national security interests -- e.g., SUVs filled with cheap gas during an election year -- to warrant American troops taking over Saudia Arabia's eastern oil fields.

Put the highly respected Yawar next to the highly controversial Ahmed Chalabi, however, and the predicted tumbling of Arab regimes in the region with the advent of Iraqi democracy suddenly looks more like the tumbling of neoconservative fortunes in Washington.

Edward Walker, former assistant secretary of state for Near Eastern affairs (during both the Clinton and the Bush administrations), says, "Ghazi al-Yawar has greater credibility as a leader of Iraq than Ahmed Chalabi [would have had]. Yawar's roots in Iraqi society are stronger and his reputation [is] unshadowed. Yawar has stronger links [with] the religious communities in Iraq, which will be a key factor in ensuring [its] long-term stability."

Born in Mosul, Iraq, in 1958, the same year the 13-year-old Chalabi left for a very comfortable 45-year exile abroad, Yawar completed his primary and secondary education in Iraq. He then went to the prestigious University of Petroleum and Minerals in Dhahran, Saudi Arabia. His father was the leader of the powerful and ubiquitous Shammar tribe, which reaches from Iraq into Syria and Saudi Arabia. Composed of both Sunnis and Shiites, the Shammar are generally religiously and politically moderate. "My mother would take me to visit the holy shrines in Najaf and Karbala, in addition to the Sunni mosques in Baghdad and St. Mary's Church," Yawar told the Iraqi paper Al-Zaman.

Yawar's uncle, the current Shammar tribal chief, refused to sanction Saddam Hussein's invasion of Kuwait in 1990 and went into exile in London. In retribution, Saddam seized huge tracts of Shammar lands throughout Iraq. Yawar, who was then a graduate student in engineering at George Washington University in Washington, returned to Saudi Arabia after completing his master's degree, eschewed politics and instead established a successful telecommunications company with his uncles. He returned to Iraq at his elder uncle's insistence, and after the assassination of Iraqi Governing Council President Izzedine Salim on May 16, he was overwhelmingly elected to replace Salim.

After he was chosen as Iraq's president, Yawar dominated the Sunday morning talk shows in this country. For a man with none of Chalabi's Washington experience or P.R. machinery, he deftly handled veteran verbal jouster Tim Russert. When Wolf Blitzer asked if he would run for elected office in Iraq, he responded, "Well, we'll wait and see ... how things go. If the law allows me to do so, and if the grounds are working for the noble cause of rebuilding Iraq, I would be honored to serve my country." Blitzer said it sounded like he had answered yes, to which Yawar responded, "A political yes." And this guy has no media handlers? Although his lead assistant and spokeswoman, Hind Al-Shannen, may have had something to do with his performance, he seems to be gifted with a natural ability to exude calm and confidence, qualities that could well inspire his fractured nation in the coming months.

On the liberation of Iraq from Saddam, Yawar is characteristically self-effacing. He was recently quoted in an Arabic newspaper as saying that Chalabi and others may "think they are entitled to a role [in the Iraqi government] because they believe they overthrew Saddam Hussein. [But] it was the United States that overthrew Saddam while we were eating TV dinners."

Meanwhile, back in Riyadh, the Saudis may get the last laugh. The CEO of a prominent Saudi company told me that lots of jokes are circulating about "their" man in Baghdad. For instance: "What's the similarity between [Lebanese Prime Minister Rafik] al-Hariri and al-Yawar? Both of them make regular visits to the Riyadh passport office!" And: "A member of the Shammar tribe wrote a letter of protest to the king because the passport office will not put 'member of the Iraqi ruling family' in the 'occupation' space on his passport." I guess humor, like plans to democratize the region, requires some appreciation of local attitudes and customs. But trust me, Saudis are smiling broadly these days.

Maggie Mitchell Salem, a public relations consultant in Washington, was formerly director of communications for the Middle East Institute. As a Foreign Service officer from 1994 to 2000, she served as special assistant to Secretary of State Madeleine Albright.