Nine years after his exquisite "Before Sunrise," director Richard Linklater answers the question: Can the greatest romance of your life last only one night? 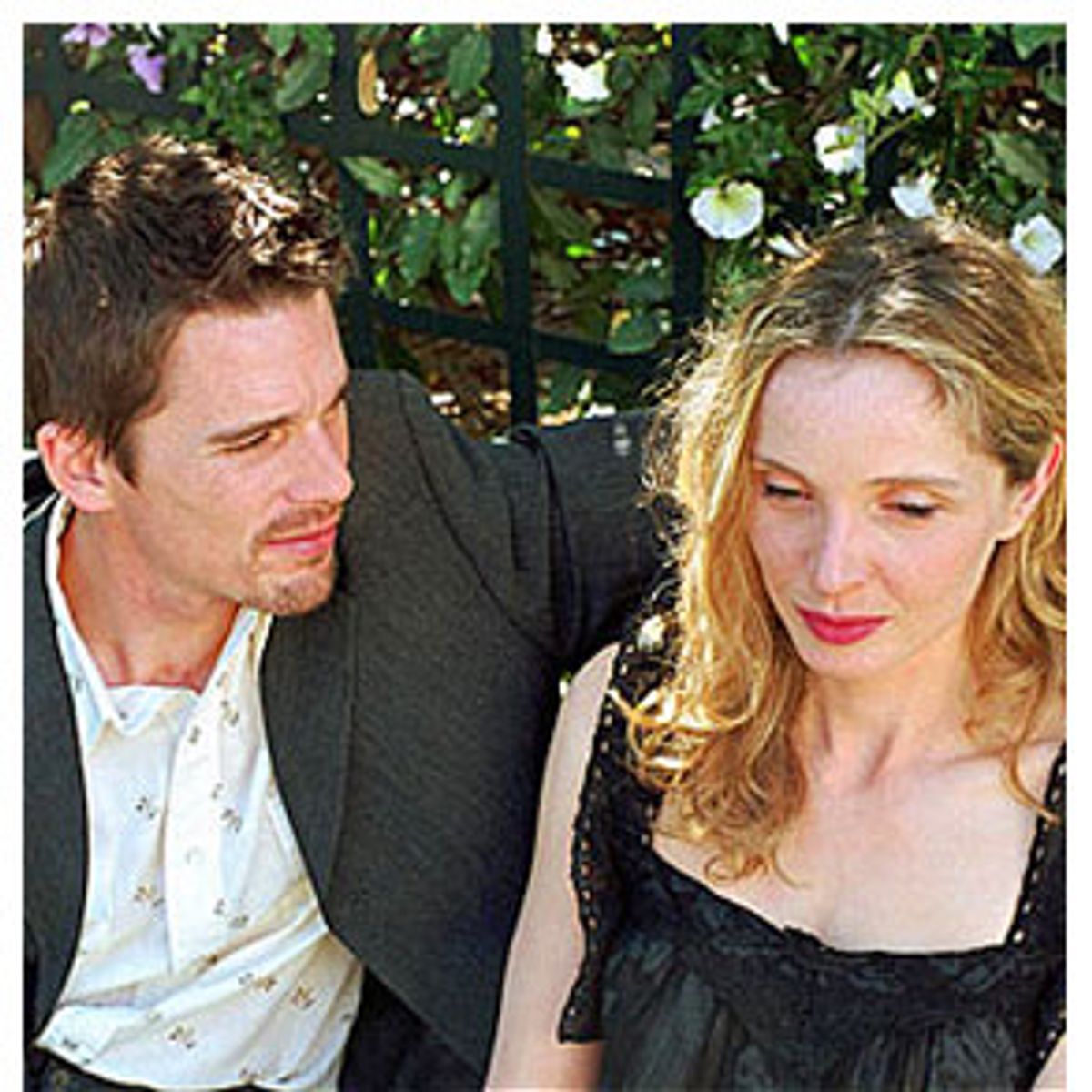 The tagline on the movie poster for Richard Linklater's extraordinary and beloved 1995 "Before Sunrise" reads, "Can the greatest romance of your life last only one night?" It's a question that can be answered in two possible ways. First, with another question: "How does the human heart define 'one night'?" Or, better yet, with another movie -- in this case, the delicate but ardent "Before Sunset."

In "Before Sunrise," Julie Delpy and Ethan Hawke played Celine and Jesse, young students who meet up on a train while traveling through Europe. She's French; he's American. Their first conversation is creaky and halting, a sorry old freight train struggling to make it uphill, with the earnestly eager Jesse working desperately (as men so often do) to engage the luminous Celine in a conversation that will last more than 30 seconds. Celine keeps trying to return to her book, doing her darnedest to pretend she's not intrigued by him.

But she warms to Jesse, almost against her better judgment (as women so often do), and the two decide to disembark in Vienna and wander the city together until Celine's train leaves the next morning. They spend the time talking, sometimes about heady metaphysical conceits and sometimes about nothing much at all. By the end of the picture, they're intimate strangers, like an ancient married couple in a fairytale who magically awake one day to find themselves young and beautiful and yearning to discover each other anew again.

At the end of "Before Sunrise," Celine and Jesse part, reluctantly, agreeing to meet again in Vienna six months later. It's an ending that works by speaking directly to our indignance, to our proprietary feelings about characters we've come to love in an extremely compressed amount of time. How could these two people even think of moving on and living a life without us, their tag-along voyeurs? And yet that's exactly what they do, leaving us to wonder: Did they keep that appointment in Vienna? And if so, what happened next?

"Before Sunset," which reunites Jesse and Celine after nine years, answers both of those questions, and yet it goes far beyond merely satisfying our curiosity. "Before Sunrise" was an opalescent picture, one that dazzled with subtle flecks of light. "Before Sunset" has an even subtler texture, and yet its muted patina leaves a more potent, longer-lasting afterglow. "Before Sunrise" captures the exhilaration of connecting with another person; "Before Sunset" moves forward from there, burrowing into territory that's more complex and dangerous, but also perhaps more vital. It reminds us that connections can remain strong even after we believe we've safely loosened them. And it offers the idea, alternately comforting and terrifying, that we don't have the luxury of moving further and further away from our most significant memories until they're just tiny specks in the distance; instead, they stick with us stubbornly, forcing us to fold them into our lives as we go on living. A romance that lasts just one night can change the rest of your eternity.

How true is that for Celine and Jesse, circa 2004? To say too much about "Before Sunset" is to give the game away. Or, as Jesse himself says, "In the words of my grandfather, 'To answer that would take the piss out of the whole thing.'" But I think it's safe to tell you Jesse is a successful novelist who has just published a fictionalized account of his night with Celine. Paris, where she now lives, is the last stop on his book tour. He gives his last reading among the cozy, cramped jumble of shelves at Shakespeare & Co., and as he's fielding questions from journalists about the possible real-life genesis of his story (dodging them is perhaps more like it), Celine herself suddenly appears. Jesse keeps talking, barely breaking stride, but it's obvious from the look on his face -- it has the guarded radiance of a decent guy who's learned, the hard way, not to expect too much out of reality -- that there's one particular thing he'd desperately hoped would happen. And finally, it has.

Celine greets Jesse with the kind of awkwardness that is its own warmth; their individual force fields start to disintegrate around them at the merest touch, although, on the surface, they both scramble to maintain their defenses. Jesse has less than an hour and a half before he catches his flight home, and he and Celine decide (as if it were actually a decision to be made) to spend that time together. As they walk through the city, starting out at a café, wandering through cobbled streets and eventually onto a tourist boat on the Seine, they share details about their lives: Celine works for a humanitarian-aid organization and is currently dating a photojournalist she claims to be in love with. Jesse is married and has a kid he adores.

Their conversation meanders from the pleasant catching-up that happens between old friends, to veiled admissions about their respective frustrations and disappointments, to declarations whose directness is piercing. As Celine and Jesse wander and talk, the camera lingers on their faces for seven or eight minutes at a time, as if it can't bear to tear itself away from their conversation, or, more specifically, from their presence itself.

We can't tear ourselves away either. The movie is structured in real time -- it's 80 minutes long, and its pacing is so fluid that the picture is over long before you're ready to let go of the characters. (Like its predecessor, "Before Sunset" ends with an implied question -- you'll have to see the movie to find out what it is.) And, like "Before Sunrise," it's beautifully shot by Lee Daniel -- its surface is both modestly low-key and lustrous.

Delpy and Hawke's performances seem to be actually layered into the movie's structure: It's a given that Celine and Jesse are entranced by each other, yet they maintain their sturdy façades through much of the movie -- the feelings beneath the surface don't so much spill out in a torrent as sift out like magic dust, a testament to the control and sensitivity of these two actors. Delpy gets to play the neurotic cutup: She tells Jesse the story of how, when she was living in New York as a student (as it turns out, he was living there at the same time), a police officer told her she'd better get a gun. Her words come out in a breathless somersault: "Me with a gun, I mean, that's really scary!" Her eyes go all googly, like those of a cartoon mermaid.

But even Celine knows she's using the entertainment value of her neuroses as a shield: When she allows her deeper feelings to tumble out, her vulnerability closes in on her. We see how the restless, thoughtful 20-ish girl we met in the first picture is not so different from this alternately poised and goofy woman in her early 30s -- the chief difference is that the woman wonders if she may be running out of things to look forward to. Delpy is trimmer now, more willowy. Her face has lost its puppyish innocence, but gained an incandescent thoughtfulness.

How does Jesse respond to this older, and yet not so different, Celine? Hawke's performance matches Delpy's note for note -- he's the woodwind to her strings. When you first compare this Hawke to the 1995 version ("Before Sunset" includes a brief montage of images from the earlier movie), you may think he hasn't aged much at all. But when you look more closely, you see how his tail-wagging boyishness has settled into something sturdier, more reliable -- not as if he's accidentally lost his innocence along the way but as if he'd consciously tuned it out. Explaining his decision to get married, he admits to Celine that he had been obsessed with "this idea of your best self. And I wanted to pursue that even if it overrode my more honest self." And at times, he looks at Celine with such anxious expectation in his eyes that he seems infinitely more vulnerable than even his younger self.

The script for "Before Sunset" was written by Linklater, Delpy and Hawke (from a story by Linklater and Kim Krizan, who collaborated with the director on the screenplay for "Before Sunrise"). It seems as if the three set out with a stern mission for themselves and never veered away from it. "Before Sunset" is that rare adult romance that doesn't condescend to adults. We generally accept that young people are more vulnerable to suffering at the hands of love. The prevailing wisdom is that you don't feel things as acutely as you get older, which, like so many nuggets of prevailing wisdom, is true -- except when it's not.

The suggestion, I think, is that connections between souls can be as solid as, and even messier than, connections between bodies. At one point Jesse confesses to Celine, "If someone were to touch me, I'd dissolve into molecules." We often talk about romance as a dreamy thing, a gossamer blessing that floats down upon us from the sky. "Before Sunset" nudges us into rethinking everything we claim to know about romance. For all its elusiveness, it may be sturdier, earthier than we know. It just might be the glue that holds the molecules together.