Robert Redford as a kidnapped CEO finally lets go of his boyishness, but can anyone hold a candle to Helen Mirren? 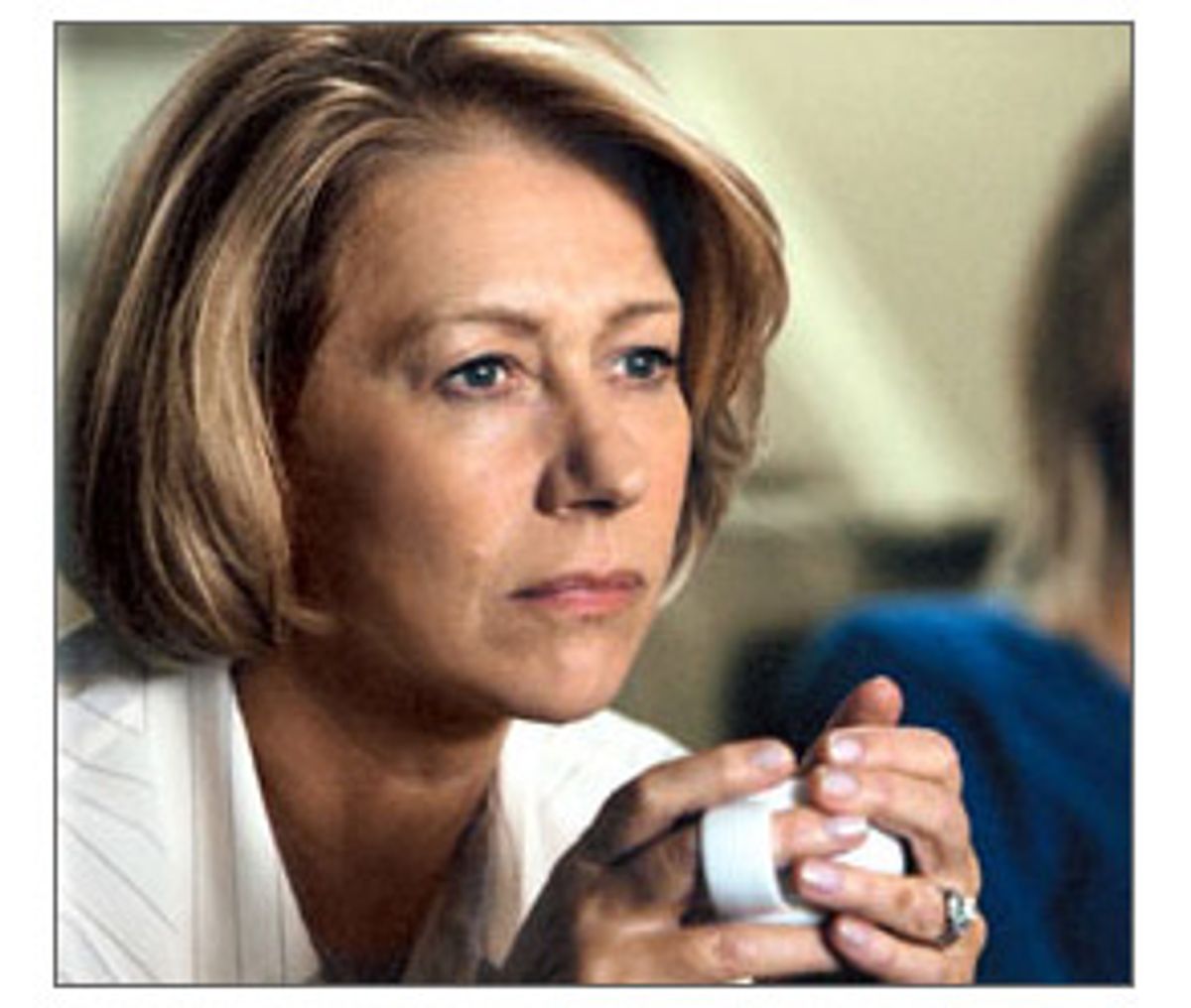 "The Clearing" represents a precise, chilly brand of filmmaking that's hard to warm up to. It doesn't matter that much of the picture takes place during the daytime: It's still washed in late-evening bleakness. Even the sunlight looks depressed.

But the unleavened somberness of "The Clearing" doesn't mean it's dead. This is the first movie directed by Pieter Jan Brugge, who has made a name for himself mostly as a producer (his credits include "The Insider" and "Bulworth"). Considering how many contemporary movies today are both fast-moving and brain-dead, I hesitate to accuse Brugge of not being flashy enough. But even though we can see a kind of sly intelligence at work here, Brugge hangs back too much -- the picture feels inert just when it could use some silent, sustained jolts of electricity.

Yet in a strange way, even the morose tastefulness of "The Clearing" works in its favor -- chiefly because it serves as a matte gray backdrop against which its actors seem gravely alive. Robert Redford plays Wayne Hayes, a wealthy Pittsburgh executive who, on his way to work one day, is kidnapped by Arnold Mack (Willem Dafoe), a polite, disgruntled, but unhinged hardworking citizen, who was formerly employed at a company Wayne used to run. Arnold packs Wayne into the trunk of a car and drives him out to the woods; he claims to be taking Wayne to a remote cabin, where he'll be kept until Wayne's family comes through with the ransom money.

The picture cuts back and forth, deftly, between scenes of Arnold and Wayne trekking through the woods and keyhole views of the restrained, dignified anguish of Wayne's family, particularly that of his wife, Eileen (Helen Mirren). Investigating Wayne's kidnapping, the FBI roots around in some of Eileen's more painful memories: Wayne once had an affair with one of his employees, a dalliance Eileen thought she had squelched when she demanded that Wayne terminate the woman's employment. The early moments of the movie, and a few brief flashbacks, give us only brief glimpses of Wayne and Eileen's life together: Before Wayne leaves for work, the two of them sit in the garden of their preposterously large, recently built home. Wayne, in shirt and tie, sips his coffee with the bland impatience of a man who's already on his way out the door, even though he's sitting still. Elaine lounges in a robe (she'll be going for a swim in the couple's massive pool later) and makes suggestions (urging him to call up this or that acquaintance, for example) that Wayne seems to ignore, only until he reiterates them blankly minutes later, as if he'd come up with them himself.

That early scene is almost like a stock snapshot of the long-married couple who have been together so long that each knows exactly how the other works; it's impossible to tell whether they care for each other beneath all those layers of predictability or are just so bored they can't even be bothered to leave. But just when you think "The Clearing" is too simplistic to have any dramatic edge, the actors dig in and flesh out the stark framework of the story. (The script was written by Justin Haythe; he and Brugge conceived the story from which it was adapted.)

For the course of the movie, there are three players in this marriage: Wayne, Eileen and Arnold. During the first part of their forest trek, Wayne and Arnold settle into a wary, prickly truce -- Wayne seems to realize his only chance at negotiating his way out of his predicament, in true slick-businessman fashion, is to befriend Arnold. He hopes to jostle him into a good-natured recognition that the two of them aren't so different after all. (At one point Wayne even tries to persuade Arnold he's got the wrong man: "I think you want my neighbor, Mr. Shipley -- he's loaded.") For a time, at least, Arnold seems to be buying Wayne's smooth-talking doublespeak: As Dafoe plays him, Arnold zig-zags between meek, subservient friendliness and brazen, macho pleasure in the power he has over Wayne. The performance is creepy precisely because it's so markedly sane.

Wayne and Arnold trade stories about their lives, focusing largely on their relationships with their wives; they're convivial at first, but their exchanges evolve into dueling, growling challenges. Redford is too often a plodding, earnest actor, and he's made a career out of wanting desperately to be liked. But his performance here is grounded and forthright, and it betrays no vanity: Redford used to hang onto his boyishness as if it were the tail end of a kite, but here he seems to have let it go freely. Cinematographer Denis Lenoir ("demonlover") shows him as he is, without either accentuating or softening the lines on his face -- it's as if Redford has finally surrendered to the plainspokenness of the lens, and it's his most flattering look. In a flashback sequence, we see him dancing with Eileen at some sort of benefit or charity ball. He dips and swirls with her, looking like a guy who knows he doesn't deserve her, and he's probably right. The trick is that Redford doesn't posit himself as an unquestionable object of desire -- an approach that, strangely or not, makes him more appealing than usual.

Then again, how could anybody be certain of their uncontested desirability when Mirren is anywhere nearby? In "The Clearing," Mirren may be more of a presence than a character -- it's as if she's taken the chalked contours of her role and roughed them up, expanding them before quietly exploding them. Her expressiveness both serves the story and elevates it: Everything she does makes vivid sense. Her no-nonsense honesty ameliorates, almost single-handedly, some of the movie's blatant, heavy-handed messages. (At one point, Arnold, musing on his home life, says, "It's a household of disappointed people" -- the kind of line writers love to write, but almost no living person would ever say.)

Mirren is a great beauty not because she has perfect features (although her knockout figure is the stuff dreams are made of). Her face is a landscape of sharp planes and soft curves -- but close your eyes for a minute, and you've forgotten which are the sharp parts and which are the soft ones. (Bewitchingly, she seems to possess the power to switch them around at will.) Mirren's Eileen isn't an easy character: She loves Wayne, but not in a way she'll admit to freely. At one point she highlights the difference between her feelings for Wayne and his mistress's view of him: "I love him, and she admires him." They're succinct, smart words, but her bitterness cuts through them, almost to the point of undermining them. Eileen seems too together, too sensible, too queenly to be bitter or jealous -- they're emotions that seem beneath her.

But as Mirren plays the moment, you realize that this short bark of a declaration is the only way she can acknowledge her bruised but untrammeled love for her husband. The fact that her husband actually had a mistress isn't so important; what's crucial, now that Eileen realizes she may lose Wayne forever, is that she define the space between herself and the other woman. We'd all like to think that in our most difficult moments, we act with generosity and openness toward other people. As an actress, Mirren has the temerity to admit that's not always the case. Without scolding or judging, she opens us up to the parts of ourselves that we like the least -- and shows us that even those untamed, selfish corners are worthy of at least a grudging respect.