What would Abe say?

Former Gov. Mario Cuomo, author of a book on the "wisest" president, speculates about what Lincoln's position would have been on preemptive war, stem cell research, restriction of civil liberties. 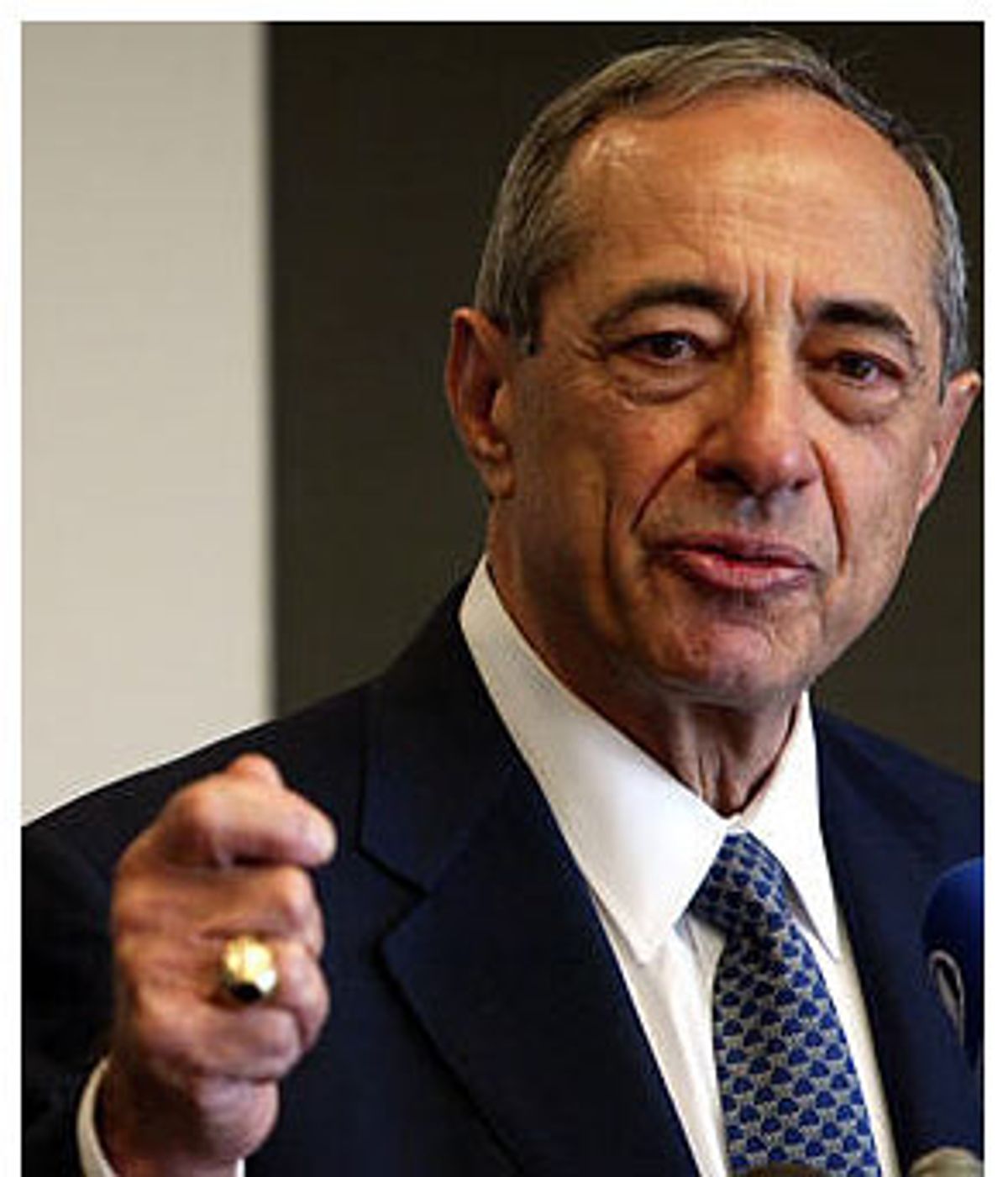 Mario Cuomo has long been an amateur scholar of Abraham Lincoln. But the former New York governor resisted offers to publish a book on the 16th president because he didn't feel he could contribute anything from his experience to the story. That changed after the Sept. 11, 2001, terrorist attacks, when, in Cuomo's view, Lincoln became more relevant than ever, in that not since the Civil War has the country been under such direct threat. Combining insights from his own years in politics and government -- and his knowledge of Lincoln's writings and life -- Cuomo finally published a book this year, "Why Lincoln Matters: Today More Than Ever."

Elected governor in 1982, the progressive Democrat left Albany after 12 years and now practices law in New York. He spoke with Salon on the eve of the July 4 holiday weekend.

What is the origin of this book?

It happened because Solidarity asked me to lecture in Poland in 1989, and I said, "Let me instead get Lincoln's works on democracy and I'll have them translated into Polish and have them sent over there." But when I went to the collected works of Lincoln and looked in the index, the word "democracy" did not appear. So Harold Holzer, a Lincoln scholar, and I arranged to have some of the nation's best Lincoln scholars put together a collection of Lincoln's writings on democracy. After that I was asked frequently to write a book on Lincoln, but I declined because I felt I needed something more relevant to my own experience. Then, a year after the Sept. 11 attacks, there was the memorial service for the victims of the World Trade Center attacks, and a reporter from the New York Times called me and asked if I had still been governor, what I would have said. "Now there's a daunting challenge," I thought. "You need to interpret this event, why did it happen? How are we to react to it?" At the service, [former New York Mayor Rudy] Giuliani and [New York Mayor Michael] Bloomberg didn't speak a word of their own. Instead, they read Lincoln. I said to myself, "If Lincoln is relevant enough for you to read him instead of giving your own interpretations of 9/11, then we should inquire of him more deeply on other current subjects."

Would Lincoln have had anything to say about President Bush's doctrine of preemptive war?

Yes. He specifically condemned preventive war on the grounds it would allow a leader to start a war cynically or unwisely. He thought it better to allow constitutional devices to work, which means going to Congress and obtaining a declaration of war. Lincoln also made it clear that you should avoid at all costs doing two wars at once. During the course of the Civil War, he was tempted by everyone around him to intervene with the British on the Trent affair [sparked by the Union's capture of two Confederate diplomats aboard a British mail steamer] and with the Mexicans [who were fending off a French attack aimed at installing a puppet government]. But he avoided it, saying we needed to concentrate our effort, which is precisely the critique that [Florida Sen.] Bob Graham was making of Bush during the Democratic primary elections.

What would Lincoln have said about Bush's appeals to religious conservatives? Implicit in these appeals seems to be the notion that if you really believe in God, you'll vote Republican.

Lincoln spoke constantly of the Bible. He referred to God as the creator, but he really spoke more like the Declaration of Independence than does Bush. The Declaration of Independence never says God. It says "nature's God." He spoke of a kind of natural law that does not depend on a deity specifically or on a deity with a personality. He relies only on intelligence, not on revelation or faith. So I see differences. President Bush is a man of faith -- he says he is, and I'm sure he is. Lincoln was not a man of faith in the sense that he would accept something on faith that could not be proven intellectually. He wouldn't, for example, say, "Life beings at conception because I believe life begins at conception." He would never say that.

So do you think Lincoln would have supported embryonic stem cell research? Bush has refused to because it involves the destruction of human embryos.

But does that mean Lincoln wasn't religious? Then as now, I have a hard time imagining America electing a president who claims to have no belief in God.

A congressman once asked him, "Mr. President, you talk about the Bible a great deal. Do you belong to any particular religion?" Lincoln said "No." The congressman countered, "Mr. President, you purchased a pew at the Baptist church." And Lincoln said, "Yes, but only my wife uses it." And the congressman said, "Why, then, are you not a member of any specific religion?" And Lincoln said, "Because they all appear to have prohibitions, admonitions and proffered truths which cannot be established as a matter of intellect or natural law, which is reason -- simple reason -- unattended by revelation of faith. Most of them insist that you believe in certain things not because you can prove absolutely that they are so, but because you want to believe in them." Then he said, "Give me a church or a religion that has one principle: Love one another as you love yourself, and I will belong to that church."

It must have been easy for his political opponents to attack him, even though it appears Lincoln hewed closely to the spirit of the First Amendment's establishment clause against state-sponsored religion.

He honored all religions. When people said he was an enemy of religion, he became very angry. He said that wasn't true. He just did not discriminate. He was the first president to appoint religious chaplains in the military, for example. He was especially good to Jewish chaplains. A lot of people think Abraham Lincoln was religious because he spent so much time quoting the Bible. And yes, it was politically fashionable to quote the Bible. But when you asked him about his being religious, he told you the truth. He belonged to no specific religious group.

Another current debate is over the state of civil liberties post-9/11. We frequently hear the argument that some suspension of rights is justified because we're at war and even Lincoln did it.

He himself, as we know, suspended the writ of habeas corpus and closed down newspapers, violating the Constitution in many ways. I think Lincoln would have said, "Look, yes, I did it. I was criticized for it. I made it clear that I believed I had no real practical choice, because what was at stake was the entire American experiment. If I had not done it, I believe, I might have lost the American experiment. It would have disintegrated. And the American experiment is so important not just to the people of the Untied States but to the whole world." He would have said to Bush, "I know Roosevelt did it. I know I did it. But you had less excuse, if you will, for doing it."

And do you believe that?

No. My personal opinion is that they were both wrong. But there is a kind of tolerance for disregard of the Constitution, or abuse of the Constitution, in times of war or crisis. Leaders get seized by a kind of pragmatism. And the Supreme Court tends to go along. They say, "Well, we don't want to do anything in the middle of the war. We'll give him -- and it's always been a 'him' -- a little leeway." But I think democracy was mature enough in Lincoln's time to do without the suspensions [of civil liberties].

Do you believe Lincoln would be popular today if he were alive? Could he thrive in our television and sound-bite culture?

Lincoln in my opinion was probably the wisest and most intelligent of our presidents, and certainly the most extraordinary articulator of broad, deep, philosophical political policy in our history. I don't think anyone was close to him. Not John Kennedy. Not Thomas Jefferson. But I don't think Lincoln on television, where everything is in sound bites, would do very well. His strengths were rationale, intelligence and analysis. Just read the Lincoln-Douglas debates.

So would Lincoln have been successful in today's culture? He didn't have much charisma.

Yes, charisma is probably more important now than in Lincoln's time -- which was good for Lincoln. He was described as a baboon. A child told him to grow a beard to cover his face. People said they could hear his voice from a great distance when he gave a speech, but it wasn't pleasant. He had huge feet. His clothes never seemed to fit. But people who got to know him personally liked him. Most of the country never met him in person, so they judged him by his words and his deeds.

Harold Holzer has a great book, "Lincoln at Cooper Union," about the speech he gave [in New York as a presidential candidate] in 1860. It was a brilliant analysis of law, the Constitution, slavery and the history and politics of slavery. Can you imagine Bush or John Kerry getting away with an hour and a half speech, and people actually reading it? People who had never seen Lincoln before thought he looked ridiculous coming into Cooper Union. But they left there thinking he was a genius. He wouldn't get the chance to dazzle people that way today: His "image," especially on television, would be more important than his intelligence and oratorical ability, and that would put him at a great disadvantage.

What do you think when people say John Kerry's not charismatic?

He is when you get to know him.

That's what you said about Lincoln. But as we've discussed, Lincoln didn't have to contend with television.

I think John Kerry has to be allowed to make better contact with people, and I think he will from the convention on. You have to get to know the real John Kerry, and some people don't find it easy to share themselves emotionally with people. I want to see a John Kerry who will bring a tear to someone's eye, and get you to laugh, and chill you by reminding you of what happens in a war. I think he has this dimension. I think he hasn't expressed it yet. Right now, this is Bush against Bush, and Bush is losing. But Bush will not lose the presidency unless Kerry adds to that and presents an alternative. I do think John Kerry will show, as he has in the past, that he is a powerful "finisher" and will win going away.