Having sex for the first time after amnesia was like the real first time, but without Journey playing in the background. 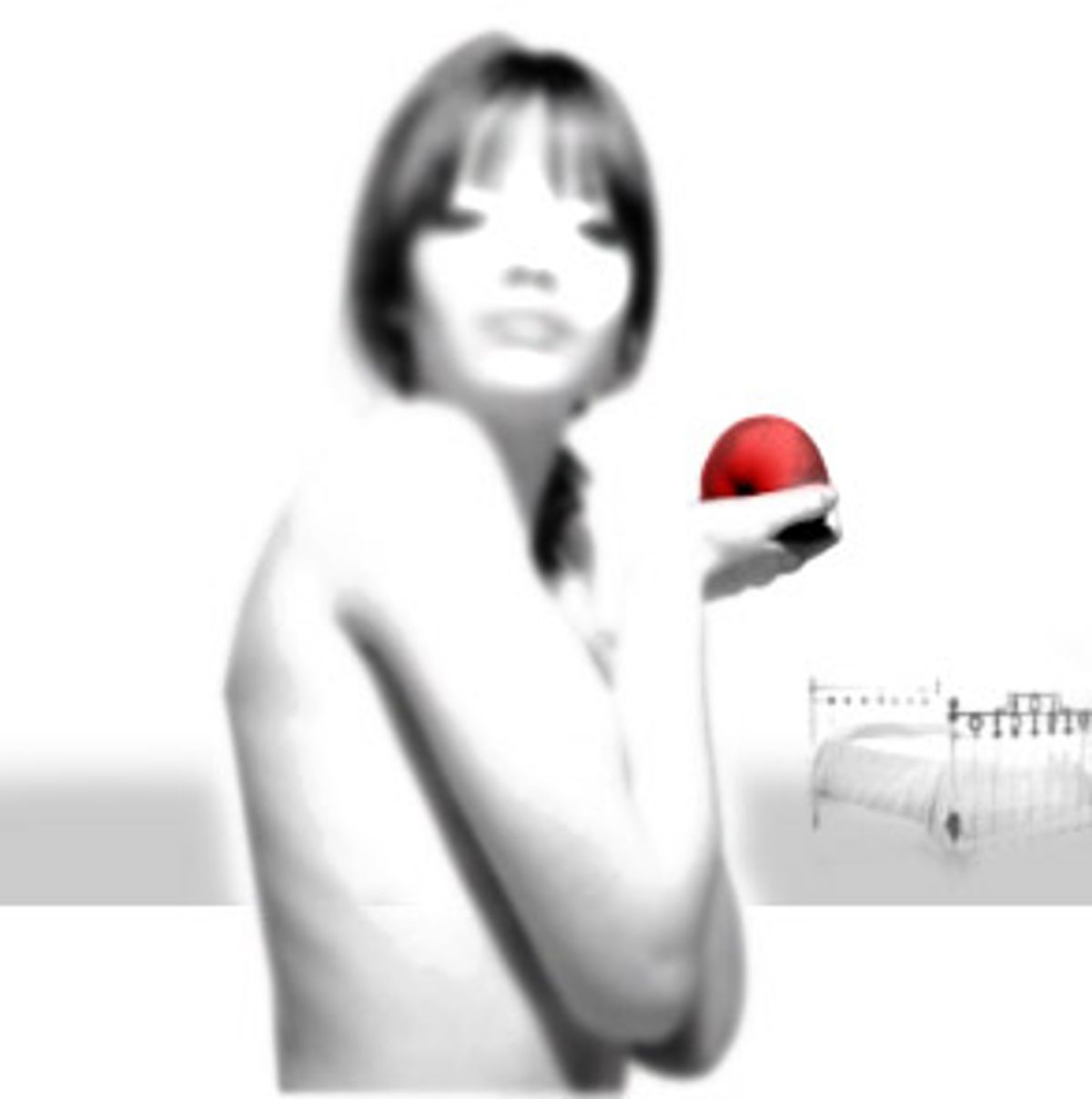 I have always loved to be kissed gently on the neck, to lie in someone's arms, to be made mad passionate love to -- at least I think I've always loved those things. That's what I'm told.

Things got confusing once I suffered a head trauma that brought on amnesia. Having sex after having amnesia was like losing my virginity all over again, except without the awkwardness and ineptitude of the real first time. And without Journey playing in the background.

In November 2001, I was seriously injured on the set of a low-rent TV pilot. The details of the incident are another story altogether, but suffice it to say that the show's producers have secured a spot in that special room in hell otherwise reserved for the creators of "The Swan."

I was left with an immobilizing back injury and -- even more immobilizing -- amnesia. I had always chuckled at the use of amnesia as a narrative device in films and soap operas -- it always seemed a little contrived and unrealistic. My own experience was a combination of short- and long-term amnesia -- I didn't know my history and I often wasn't aware of what was happening moment to moment.

Not having memory made me a blank slate. Without memory of my experiences and opinions, I had nothing to base any feelings on. I could be a Republican and not even know it.

"She's a vegetarian!" one of my best friends screamed as she stormed into my bedroom, Paul Revere-like. "Don't let her eat any meat!" she told Eric, my boyfriend of almost a year. No worries. I was lying in bed virtually comatose, anyway.

I knew some things. I knew Eric was my boyfriend, but I was admittedly indifferent to the fact. When someone told me something, the fact itself would come back to me, but without any emotion or attachment. When my friend told me I was a vegetarian, I thought: Oh, right, OK. I remembered the fact at that time, but not the feelings behind it. I might as well have been eating veal. I could care less.

Eric slept next to me that night and it was strange. Who was this guy? And isn't it a little presumptuous of him to be hopping into my bed? Did he love me? Did I love him? What if we had had a giant fight the day before my accident -- would I have known?

The next morning, he showed me pictures of a recent trip we took to Los Angeles to jog my memory -- and perhaps to make a case for the fact that we were actually a couple (though you can do amazing things in Photoshop now). Eric and Cole at the beach, Eric and Cole at Mann's Chinese Theater, Eric and Cole on the Ferris wheel at the Santa Monica Pier.

I didn't understand the way he looked at me as I recuperated in the bed day after day. His expression was one of enormous concern and affection. Sometimes he had tears in his eyes. Why are you doing this? I wanted to ask. Why are you feeding me and taking me to doctor's appointments and keeping my family posted and giving me my many medications?

And what was he getting out of it? Barely companionship. No dates, no great conversation or clever banter. How long do you hang around Sunny von Bulow in a Lifetime Original Movie before you bail?

Sex was out of the question, of course. Physically, there was no way I could participate. Even the slightest movement caused me tremendous pain.

After a few weeks I started to become more coherent. Though my short-term memory was still shaky -- a lot of "Did I just take my meds?" moments right after taking them -- my long-term memory was coming back. I was still in a lot of pain, but with medication and physical therapy and time, the healing process was beginning. Now, in bed at night, Eric could hold me. We could kiss and, like teenagers, we eventually graduated to light makeout.

I had forgotten what it was like to be touched, so every sensation felt like something I had never experienced before. I could become consumed with even the simplest kiss as I was discovering what it was like to express love physically. I was still confused a lot of the time and didn't remember much. Had Eric been less sensitive, I'm sure he could have used it to his advantage ("Cole, you always used to love unprotected anal sex -- trust me"). Instead, he was very patient and sweet and hesitant for us to do anything physical. Once we got to second base, then third, we stayed there for quite some time.

"I didn't want you to do anything that was going to cause you pain," Eric told me a few years later.

Months passed and the more I recovered, the more eager I was to rediscover what this whole sex thing was about. I wanted to re-lose my virginity. What an opportunity! How many people -- aside from born-again Christians -- get to lose their virginity more than once? And this time, I'd do it right. We'd have dinner first, at a real restaurant. I had my own home now. A great music collection. Candles. And no homework due the next day. Eric didn't want to rush things. He knew -- perhaps better than I -- the pain I was in, the trouble I had sleeping, the confusion I still experienced. Whenever we were in bed, not having sex, of course, and I so much as winced he would stop everything: "Are you OK? What do you need?"

Not having sex became a joke itself. "Want to go home and not have sex?" I said one day on our way back from our weekly trip to the neurologist.

I was looking forward to it, but sometimes I would get nervous. What if I wasn't any good? What if I had forgotten how? Was there a special way to do it? I hadn't forgotten how to chew food, go to the bathroom. Would sex come back to me instinctively? Sex was a different kind of learned behavior, rooted in experiences that, at the time, I wasn't able to get to. The high school sweetheart, the college soul mate, the trip-to-Rome soul mate, the mid-20s soul mate, the Brazilian guy, the other Brazilian guy. None of them existed. Was there a place in my brain where my memories and feelings were being saved in a box, waiting for me to access them once my memory came back to me fully?

One night Eric and I had -- slowly, carefully -- walked to a neighborhood restaurant for Greek food. It was difficult to sit up in the chair because of my back pain, so I tried to recline a bit in the booth. He let me have one very small sip of wine. I was happy to be out of the house and feeling very in love. Tonight was the night, I decided.

We came home, got ready for bed. I lit candles. I made a joke -- something about my parents being out of town, something about "going all the way." I put "Styx Greatest Hits" in the CD player and let Dennis DeYoung work his magic. "La-dy, when you're with me I'm smiling. Give me whoa-oa-oa your love ..."

When we finally did make love, it was unlike anything I had experienced in my life -- as far as I knew. It was strange and new, and the sensations were overwhelming and intense but it felt like home. It was perfect. And I began to weep uncontrollably. I was quiet, with tears streaming down my face the entire time. "Oh my god, are you OK?" Eric panicked for a moment, ever attentive. "It's OK, it's OK," I reassured him. It was unbelievable. Indescribable, amazing.

Sex after forgetting awakened sense memories and desires in my body that I hadn't realized were there because I had been spending so much time trying to tap into my mind. This night it was a joy to be out of my head, to savor this state that had previously been frustrating, of only knowing the present moment, of not knowing what I would feel next. I completely gave myself over to my body.

We don't talk about it at all now, but I asked Eric recently how he was able to do it for all those months -- to take care of me, put all of his own life aside, to be completely patient and loving with his invalid girlfriend. "When I think of that time," he said, "I think of your injury. I don't think of what I had to do." I hoped that I would be so selfless if I were called upon like that.

"I wanted to take care of you," he continued. "I didn't really feel like there was a question. I was most worried about you immediately and also I was worried about the long term. I didn't know how badly you were hurt or how much you would recover. I was angry at the people who did this -- the producers. I was worried about how you were feeling, but I also wanted to reassure you because I could tell you were confused and disoriented." He continued in his classic deadpan, "I was also confused and disoriented but I didn't want to let on so I pretended I had it all together in order to trick you. Plus you were easy to fool because you were so dizzy."

Now, I try to look past the pain and frustration and confusion of that time in my life and reinvent it as a great, dramatic love story. Amnesia is the crafty plot device that renders the busy and sometimes demanding New York woman completely helpless, with no choice but to surrender all control. She's a virgin, of course. And it's her first love.