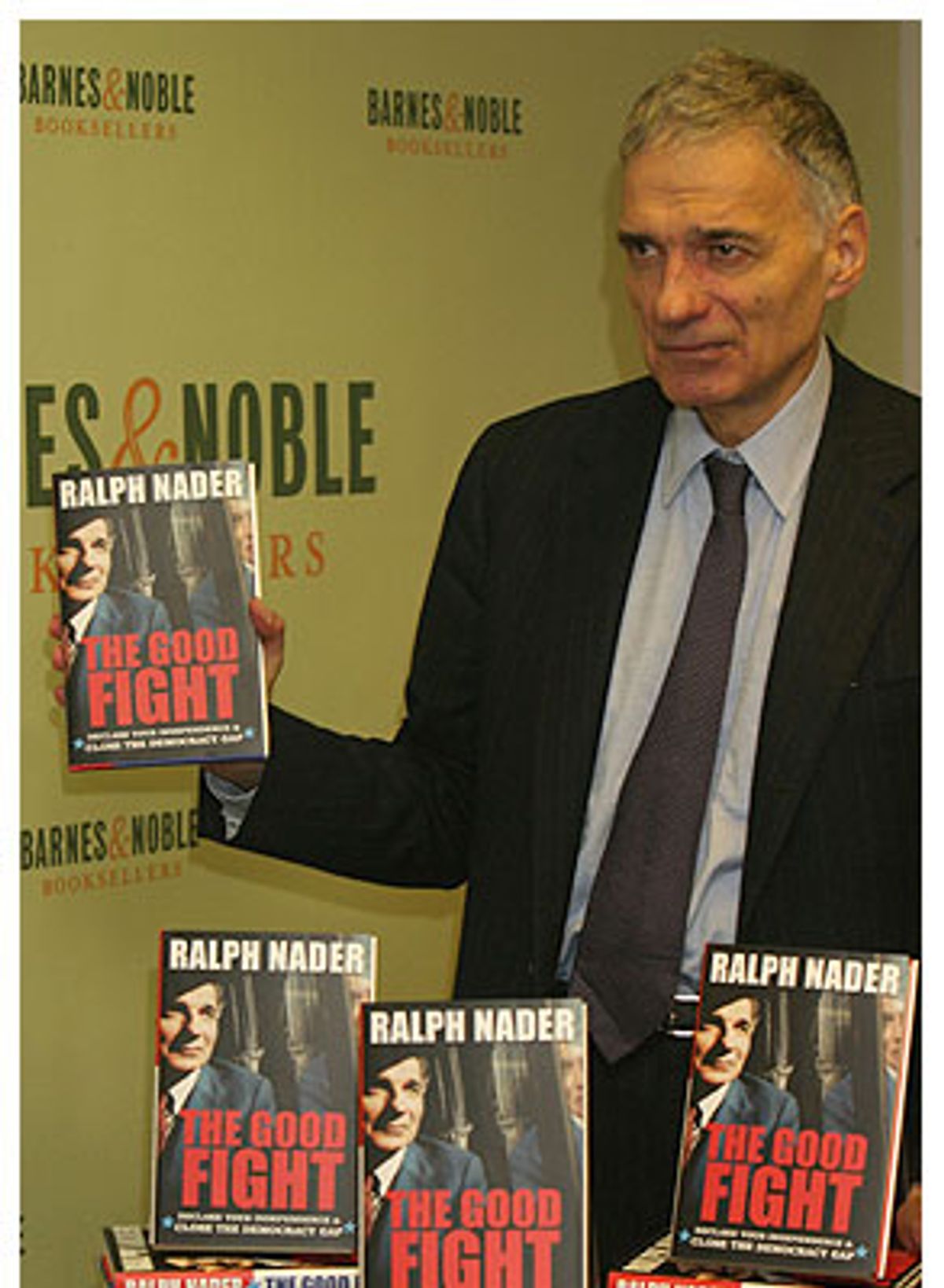 When former Democratic presidential contender Howard Dean faces third-party candidate Ralph Nader in a 90-minute debate to be aired on National Public Radio Friday, Dean is sure to press Nader on whether his run for the White House will again help Republicans on Election Day, and on whether Nader has become that party's pawn.

Another good question Dean might ask Nader, critic of corporate-controlled Washington and foe of rampant media consolidation, is why Nader's new book, which arrived in stores this week and kicks off his presidential campaign, is being published by Rupert Murdoch. Chairman of the expansive conglomerate News Corp., the conservative Murdoch has been a chief advocate for more than two decades of extensive media deregulation. And his HarperCollins is not only publishing Nader's "The Good Fight: Declare Your Independence and Close the Democracy Gap" but providing the candidate with expensive public relations promotion and media bookings.

"Is this a coincidence, or a backhanded way of helping Nader out?" asks Chellie Pingree, president of Common Cause.

During a May 29, 2003, appearance on CNN's "Crossfire," Nader spoke out against the then-pending Federal Communications Commission vote to loosen media ownership rules -- rules that would greatly benefit Murdoch's News Corp. Nader insisted that the debate "is about Rupert Murdoch. It's about five giant media conglomerates controlling magazine, newspaper, TV. I mean, it's getting worse and worse." Then he labeled Murdoch's News Corp. a "conglomerate rat."

Asked about the book deal, Nader's campaign spokesman, Kevin Zeese, responded that "it's kind of a stretch to say he's now dealing with Rupert Murdoch," since it's a HarperCollins imprint, ReganBooks, that's publishing "The Good Fight." "On the book tour, Ralph is very critical of the corporate control of many aspects of our lives. So even if Murdoch is putting money into the book, he's giving it to a messenger who disagrees with him," says Zeese.

But Murdoch's publication of Nader's book fits in with an emerging pattern of political activities. Recent news reports indicate Republican groups nationwide are actively aiding Nader's effort to secure space on election ballots in the hope that he will hurt John Kerry's chances. The Philadelphia Inquirer reported that "Bush-friendly forces have been openly aiding his ballot efforts in Oregon and Arizona; according to a review of Nader's Arizona petitions by the state Democratic Party, 65 percent of the signatories were Republicans. On June 27, the Oregon chapter of Citizens for a Sound Economy -- led nationally by former U.S. House Majority Leader Dick Armey and financed by the corporate interests that Nader has opposed -- phoned members and said, 'Nader could peel away a lot of Kerry support in Oregon ... Liberals are trying to unite [but] we could divide this base of support' by signing up for Nader."

Against that backdrop, Nader's alliance with the publishing arm of Murdoch, who has been a lavish supporter of Republican candidates and uses his media outlets -- including Fox News, the New York Post and the Weekly Standard -- to advance Republican causes and his own business interests, raises questions about the media mogul's intentions. "I can't get in the mind of Rupert Murdoch, or his motivation," says Gene Kimmelman, senior public policy director for Consumers Union, which opposes media deregulation. "But is it plausible that there could be a political motive to promote Ralph Nader and help him draw votes away from the Democratic candidate who's opposed to further media consolidation? Of course it's plausible. Murdoch has a history of making decisions that involved politics that ultimately benefit his business."

In 1995, Murdoch's HarperCollins famously offered newly minted House Speaker Newt Gingrich an enormous $4.5 million book deal -- around the same time that Murdoch and his lobbyist were meeting with Gingrich to discuss the serious FCC challenge Murdoch faced regarding whether Fox Broadcasting was foreign owned, in violation of U.S. broadcasting rules. Facing bipartisan criticism of the deal, Gingrich retreated and settled for a token $1 advance in addition to sales royalties.

Nader must be aware that Murdoch uses publishing contracts to aid his allies. During the 1995 Gingrich controversy, Nader wrote a long letter to Rep. Nancy Johnson, R-Conn., then chairwoman of the House Committee on Standards of Official Conduct, demanding that she authorize an independent counsel to look into the book contract.

In 1998, HarperCollins made headlines again when it unceremoniously dropped from its list the memoir of Christopher Patten, the last British governor of Hong Kong, whose book, "East and West: China, Power and the Future," was critical of the communist government in Beijing. Patten was initially informed that his submitted chapters did not meet HarperCollins' "expected standards." But internal News Corp. memos published by London's Daily Telegraph made it clear Patten's book was dropped out of concern that its harsh tone might damage News Corp.'s burgeoning business dealings in the Far East. Patten sued for breach of contract and settled out of court for an undisclosed sum.

That same year, Murdoch ordered Fox Television to abandon its planned production of "Strange Justice," a drama based on the book of that title by the New York Times' Jill Abramson and the New Yorker's Jane Mayer about the confirmation of conservative Supreme Court Justice Clarence Thomas. (It was subsequently produced and shown by Showtime.) According to a New York Times report, Murdoch told an associate that Thomas was a friend of his and that he had been railroaded during his confirmation hearing.

Nader's previous book, 2001's "Crashing the Party: How to Tell the Truth and Still Run for President," posted modest sales numbers for its publisher, St. Martin's. The hardcover sold 27,000 copies, according to Nielsen BookScan, which tabulates sales. The paperback version in 2002 sold just 17,000 copies, as interest in Nader seemed to wane. In late 2000, the New York Post reported that Nader had landed a book advance for "Crashing the Party" worth roughly $200,000. If true, it's unlikely St. Martin's made much of a profit from sales of 44,000 copies. Nader had an option for another book at St. Martin's, but it had expired by the time he was ready for his next book. That meant Nader was free to shop for a new publisher for "The Good Fight." Nader's literary agent could not be reached for comment.

Now Nader has found a new home at HarperCollins' ReganBooks imprint. "Nader is a presidential candidate with an interesting background, and that alone was the reason we published the book," says Paul Olsewski, vice president and senior director of publicity for ReganBooks. Citing a company policy, he would not comment on how much ReganBooks paid for Nader's book.

While ReganBooks did publish Michael Moore's 2002 anti-Bush bestseller, "Stupid White Men ... And Other Sorry Excuses for the State of the Nation!" it was only after Moore publicly accused the publisher of trying to censor the book by forcing him to cut passages deemed too critical of Bush. Last month ReganBooks hurled a big spit wad at the "Fahrenheit 9/11" filmmaker with a new book titled "Michael Moore Is a Big Fat Stupid White Man."

Nader's "The Good Fight" will not only benefit from the P.R. muscle of Murdoch's publishing arm but will also receive generous airtime on New Corp.'s television and radio outlets. "The big question will be, Does Murdoch promote the book on Fox?" says Pingree at Common Cause. "Fox has made it clear who they'd like to see in the White House. So if Fox promotes Nader's book, then that's more of a story than Harper's deciding to publish it."

According to Nader's book tour schedule, he makes two appearances on Fox News this week and also appears on Fox News Radio and on Hannity's daytime radio show. That compares with a single TV appearance on Fox News by Nader during the previous 120 days. "Fox never cared about Nader, or the issues he championed," says Jeffrey Chester, executive director of the Center for Digital Democracy.

But now, Nader's book presents a unique synergy of politics and profits for Murdoch. "It's a win-win for him," says Consumers Union's Kimmelman, who during the early '80s worked for Public Citizen, a public advocacy group founded by Nader. "Murdoch's making money by promoting the book on Fox, and if Nader draws a strong audience, it may benefit reelecting George Bush, which would mean a favorable environment for further deregulation of Rupert Murdoch's media empire. As an entrepreneur, you can't ask for anything more; he's making money on both ends."