I married a bin Laden

Osama's former sister-in-law tells all: Secret Saudi lesbian trysts, a husband who ordered her to have abortions, and the magical power of the name bin Laden within the Saudi luxury class. 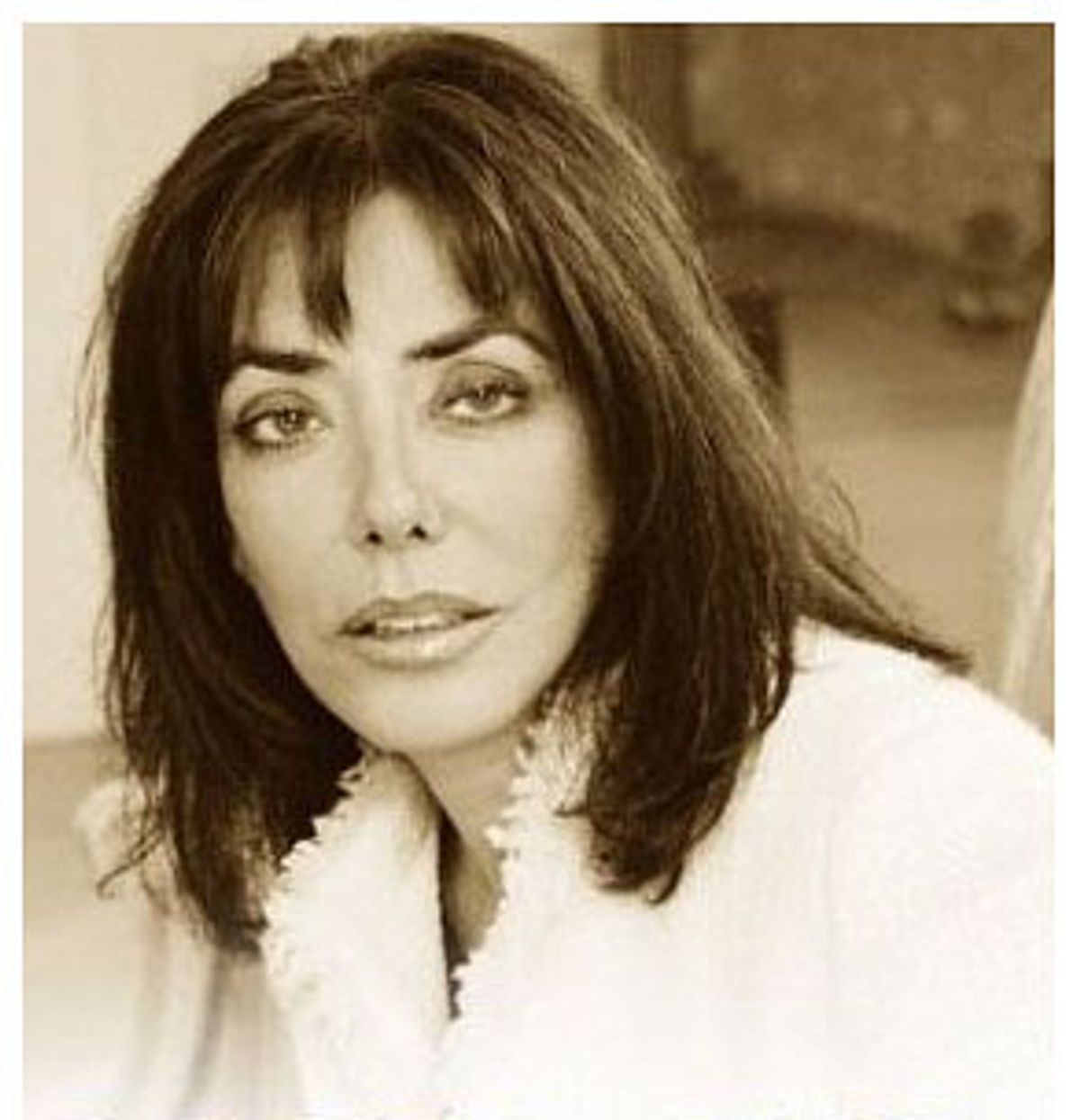 "Inside the Kingdom," Carmen Bin Ladin's new memoir about the bin Laden clan, contains only a few passages about Osama bin Laden, the world's most feared terrorist and the author's brother-in-law. (Carmen's husband, Yeslam, is Osama's half-brother; their father, Sheikh Mohamed, founder of the amazingly powerful Bin Laden Organization, had 22 wives. Western transliterations of Arabic names vary and "in accordance with convention," bin Laden is used when referring to the family and Bin Ladin when referring to Carmen and Yeslam. To confuse matters further, the family company is known as the Saudi Binladin Group.)

Readers hungry for the mere mention of Osama's name, especially now, at a time when Sept. 11 remains fresh but the only glimpse of Osama is on "Saturday Night Live," will turn these few sentences over and over in their minds. During the Afghan-Soviet war, Carmen Bin Ladin writes: "He was admired. He was involved in a noble cause. Osama was a warrior -- a Saudi hero." After meeting him for the first time, she notes, almost unimpressed: "He was not strikingly different from the other brothers -- just younger, and more reserved." But then there's this: "When Osama stepped into the room, you felt it." It's one of many lines in "Inside the Kingdom" that leaves us desperate for more. What did she feel?

Of course, in Saudi culture, hardline Wahhabi Muslims like Osama insist that women's faces be covered. Carmen Bin Ladin's real, human contact with Osama was limited, and by Western standards almost nonexistent. But one scene in this plainly written but arresting memoir does shed light on Osama.

It was 1977, a time of relative freedom and ease in Saudi Arabia, after the rush of oil money flooded the country and two years before the Iranian revolution. The extended bin Laden brood had taken off to the family mountain house, two hours from their compound in Jeddah and the deadly August heat. Even in the mountains it was 100 degrees, but Osama's wife Najwah, a tellingly miserable woman, refused to feed her tiny baby with a bottle. She was trying to feed him with a teaspoon, because her husband had decreed that his child would not be fed by bottle.

Carmen Bin Ladin, scared that the infant might become dehydrated, pleaded with a bin Laden sister to tell Yeslam, who was in the other room, to tell Osama that the child would become ill. (The men and women of the family couldn't socialize together, and Carmen couldn't intrude on the men as a female bin Laden blood relative could; often in Saudi Arabia, these elaborate, infantile games of "telephone" must be staged.) Yeslam's reply? "It's no use. This is Osama."

This experience was a huge turning point for Carmen Bin Ladin, a Lausanne-born woman of Swiss and Iranian heritage. Not long after, she decided to leave Saudi Arabia behind forever and save her three daughters from an uncertain but probably unhappy fate. It coincided with another realization, an ominous and foreboding one for those Americans who are questioning our dubious relationship with the Saudis: "Underneath [Saudi men] have always maintained their self-assured and inflexible value system, and it rises to the surface as they age. This is what happened to the Bin Ladens in the years I lived with them, and it's what happened to Saudi Arabia as a whole while I was there. It is still happening today." The pictures of the Westernized Bin Laden brothers in their youth, sprinkled in the book, all Afros and bell-bottoms, are hard to shake, and the transformative power of the Wahhabi ideology that later overtook them seems at once bone-chilling and bewildering, fantastical and childish.

Carmen writes, however, that Osama bin Laden was never, as some have claimed, a playboy as a young man in Beirut. He may have been more Western at one time, but "the now famous photographs that were taken of a crowd of teenaged Bin Laden brothers in Sweden -- they don't show Osama either." She maintains that "the boy identified in the media as Osama is in fact another brother."

Ultimately, what is most interesting and perhaps most important about "Inside the Kingdom" are the details it provides about daily life in Saudi Arabia. "The Saudis are the Taliban, in luxury," Bin Ladin writes. And "Inside the Kingdom" is also a personal, emotional account of a royal family and its bin Laden business friends -- people to whom the United States and President Bush's family remain inextricably linked, despite their autocratic rule and uncertain relation to the author of the Sept. 11 attacks.

The stark transformation of Carmen Bin Ladin's own life might be what strikes readers most personally. The author married Yeslam Bin Ladin very young, when she was a stunning, sexy, glamorous-dressing Westerner, a woman who had traveled freely to her mother's native Iran and back to her home in Geneva. In the early years of their marriage, Yeslam and Carmen lived in California, and the book features happy pictures of the handsome couple in sundresses and suits, T-shirts and jeans, lying on the grass in the sunshine.

When the couple moves to Saudi Arabia, it's as if the world goes black and mute. Carmen writes of her first time wearing an abaya, the suffocating shrouds women must wear over their faces and bodies: "I looked out of the car window and through my veil I saw just a dim light -- no people, no buildings. Even the streetlights were dark." Not surprisingly, it gets worse. An extraordinarily rare trip to the grocery store, so she can get the proper milk for her daughter, involves an arduous charade: "And in order that one completely black-shrouded woman could walk inside with her husband, the store had been emptied -- completely emptied -- of all its clients and staff."

In Saudi society, women simply have nothing to do. "There were no books," Bin Ladin writes. "There were no theaters, no concerts, no cinemas. There was no reason to go out, and in any case we could not go out: I was not allowed to go for a walk, and legally could not drive." Foreign newspapers featured blacked-out, unreadable sections -- those bringing news of two countries: Israel and Saudi Arabia. Her daughters' schooling is all religion, and "no sports, no debates, no discussions. No games, marbles, or tricycles." Wafah, the oldest, returns home one day with "I hate Jews, I love Palestine" scrawled in her notebook, just as a normal girl would scribble her first name beside the last name of the little boy she loved.

After this beginning, it's confusing to learn that just a few years later, the country flush with oil money, the bin Ladens could enjoy Thursday night parties where the sexes mingled and alcohol was served. Carmen Bin Ladin says she initiated these happy nights: Western businessmen and diplomats would visit for tennis matches and a perusal of her proud library. No Saudi women ever showed, but a few Saudi men did. One gets the sense that the Bin Ladens, under the protection of the Saudi royal family and their own astonishing wealth, really could do what they pleased.

Even in 1979, after the Islamist revolution in Iran, when Saudi Arabia returned to harsher ways, being a bin Laden meant something. In Saudi Arabia at that time a husband couldn't tend to his pregnant wife in public: "One afternoon, I was in a supermarket when a pregnant woman fainted; her husband rushed to help her up. The mutawa [religious police] were there, and they stopped him, yelling at him that he must not take his wife in his arms in public." Carmen, however, had a Sudanese driver by her side to shield her from the mutawa with two words: "Bin Laden," the driver would say, and the police would back down.

The truth is that the bin Ladens choose to live the Wahhabi way, even though, as Carmen often suggests, they had the potential for more freedom than everyone else. The Iranian revolution also made Yeslam and his extended family, extraordinarily nervous and religiously obedient, terrified of the militant radicals in their own country. Yeslam would change forever, becoming a perpetually sick, intolerant, harsh and religious man, and later a harsh, religious man with mistresses on the side.

It was these changes in her husband that finally broke Carmen -- both Yeslam's infidelity and his demand that she have an abortion when she became pregnant with her third child. It was a request she'd complied with before, much to her despair. The hypocrisy in Saudi Arabian culture about women is difficult to get your mind around. Bin Ladin writes of Saudi princesses, locked up and disdained by their husbands, suffering from "bone density problems from lack of sunlight and exercise," who, not surprisingly, fall in love with one another.

"We all heard rumors of a kind of lesbian party circuit in Riyadh," Bin Ladin writes, "where women would socialize and pick each other up." In Saudi Arabia, homosexuality is punished by public flogging. Yet, Bin Ladin implies, who can really be bothered to punish the silly Saudi lesbians? "Women don't matter to a Saudi man," Bin Ladin explains. "Possessing them matters -- matters crucially -- but once the women are locked in and breeding, what happens among them doesn't count for much." The rules in Saudi Arabia, it seems, are at once terrifyingly oppressive and weirdly arbitrary.

Carmen Bin Ladin rarely, if ever, talks about how the rest of the bin Laden clan regard the U.S. and the Western values that her former brother-in-law Osama despises so much. Yeslam and some of his other brothers conduct themselves like Westerners while vacationing in the West (Yeslam now lives in Switzerland himself), but we get no sense of whether their politics fall in line with those of their militant brother.

But Carmen does discuss the intense bin Laden clan loyalty, the Bedouin mentality that she believes makes Saudi Arabian men unique. She writes that she "cannot believe" the bin Ladens would cut Osama off completely: "I simply can't see them depriving a brother of his annual dividend from their father's company, and sharing it among themselves. That would be unthinkable -- among the Bin Ladens, no matter what a brother does, he remains a brother." At the end of the memoir, Carmen "openly defies" the bin Ladens to open their books and prove that they had nothing to do with Sept. 11.

The author, who now lives in Geneva and whose daughters studied in America, also never says outright what she thinks of the close relationship between the U.S. and the Saudi regime. Considering the steady and compelling case she builds for the tyranny of the society, however, it's pretty easy to read between the lines. Or, at least, to share with her this fear about Saudi society and America's silence about it: "If we, in the Western world, are not vigilant enough, there will be no end to their terrorism."