The outing of Congress

Republicans hoped the federal marriage amendment would electrify their conservative base, but two gay activists countered by spreading fear and loathing on Capitol Hill. 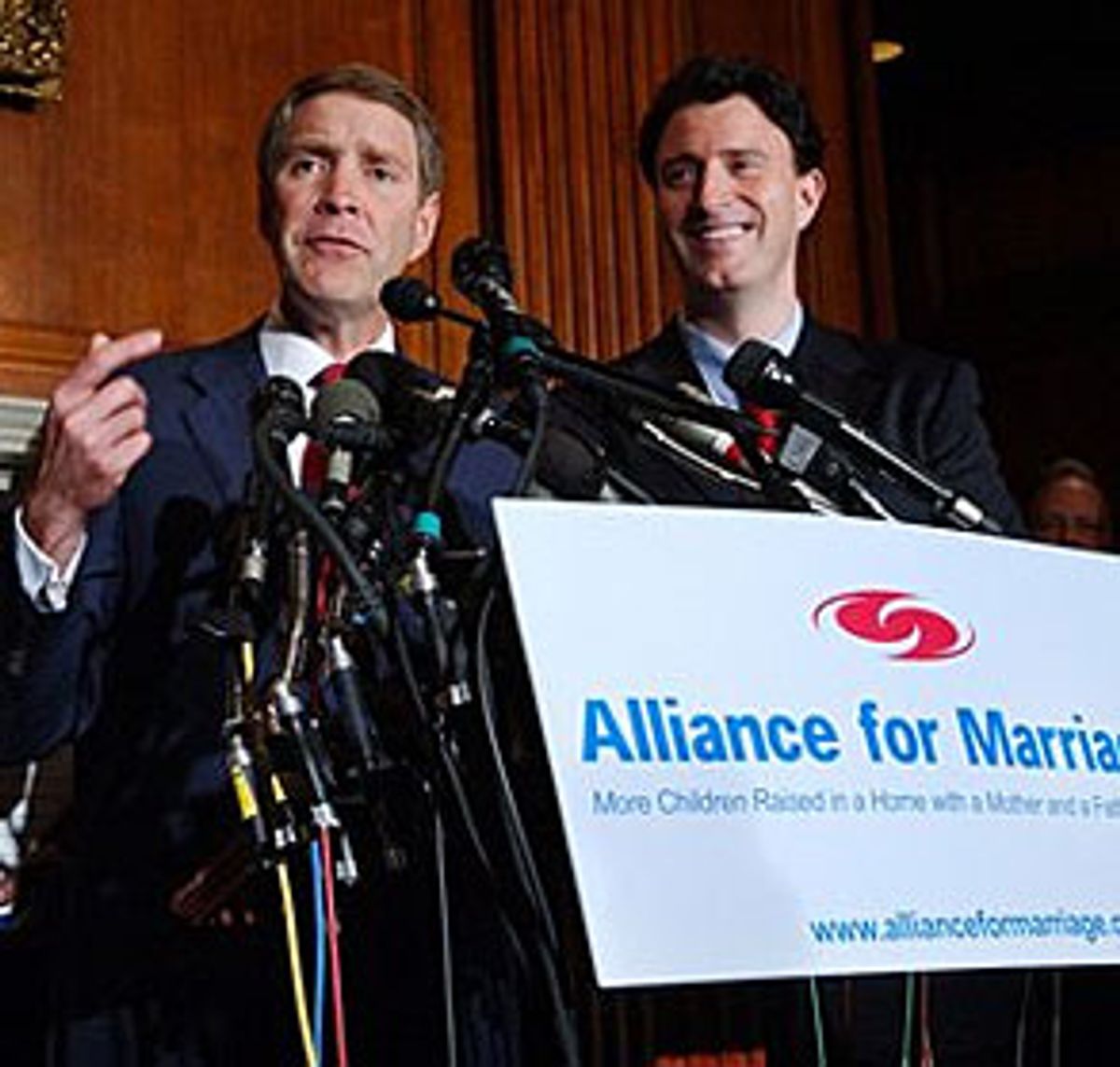 Michael Rogers, a Washington political activist, decided several weeks ago to launch an Internet campaign to publicize the sexual orientation of gay and lesbian members of Congress and their staffs, if they favored the federal marriage amendment. Drawing on a network of informants, he began posting on his Web site the names of gay congressional staffers who work for anti-gay members of Congress. "It's about exposing hypocrisy," Rogers told Salon, adding that he was prepared for some nasty hand-to-hand political combat.

On Wednesday, however, Rogers watched with amusement as the Senate rejected further action on the proposed constitutional amendment to ban gay marriage by a vote of 50 to 48. Instead of staging a clear-cut drama to rally the GOP's conservative base, as White House political strategist Karl Rove had planned, Senate Majority Leader Bill Frist stumbled as he tried and failed to bring the controversial measure to a vote. Moderate Republicans made it clear that on a direct up-or-down vote, they would not help their leadership reach even close to the 67 votes needed to pass an amendment to the Constitution. To avoid a resounding and embarrassing defeat, Republicans wound up filibustering their own top-priority proposal, throwing up a procedural hurdle to a recorded vote on the amendment itself in a desperate attempt by the Senate GOP leadership and the White House to save face.

Gay activists could not contain their glee at the spectacle of disarray. "They are hiding behind a procedural vote because their campaign to write discrimination into the American Constitution has been an unqualified failure," Patrick Guerriero, executive director of the Log Cabin Republicans, an advocacy group for gay Republicans, said in a statement. "As many as 60 senators were prepared to vote against the amendment. Rather than face certain defeat, the radical right took the easy way out ... by turning this into a largely party-line procedural vote."

John Aravosis, a Washington political consultant and former Republican congressional staff member who has been helping his friend Mike Rogers publicize his list of gay Republicans, partly through his Web site, said, "Something that was very scary became good theater overnight." Gay activists were particularly excited by Sen. John McCain's speech on the Senate floor on Tuesday night, in which he called the amendment "antithetical in every way to the core philosophy of Republicans" because it attempts to usurp states' rights. "What evidence do we have that states are incapable of further exercising an authority they have exercised successfully for over 200 years?" Referring to the Massachusetts Supreme Court, which recently legalized gay marriage in that state, precipitating the current battle, McCain said, "The actions by jurists in one court in one state do not represent the death knell to marriage. We will have to wait a little longer to see if Armageddon has arrived."

But with Bush forcing the fight over the amendment as a means of exciting religious conservatives, Aravosis said the matter is far from settled. And Frist warned after Wednesday's vote, "This issue is not going away." In the House of Representatives, Majority Leader Tom DeLay, R-Texas, vowed to pursue the amendment in September.

For these driven political reasons, Rogers said, he will not be dropping what's become known around Washington as his "outing" campaign (although Rogers insists he is merely highlighting the sexual orientation of congressional aides who are already "out"). Now, Rogers said, he plans to turn his effort against hypocrisy on a new target: married heterosexual members of Congress who rail about the need to protect the institution of marriage while engaging in extramarital affairs.

Rogers' campaign has been covered closely by the Washington Blade, a gay newspaper, and the congressional newspapers Roll Call and the Hill. National Public Radio interviewed Rogers on Wednesday. The media spotlight has encouraged him to intensify his controversial tactics. "Frankly we didn't expect this to get so much attention. We're learning that people are interested, so why would we stop?" an elated Rogers told me shortly after the Senate vote on Wednesday.

The Log Cabin Republicans have condemned the outing campaign. "The fact that there were members of our community who instead of working to defeat the constitutional amendment were instead working to destroy the personal lives of individual congressional staffers played right into the hands of the evangelical right," said Chris Barron, Log Cabin's political director. "Jerry Falwell and company couldn't have asked for a better gift than a community divided against itself in the weeks leading up to the critical vote."

Barron said there is no evidence that the outing campaign caused any senator to change his or her vote, and added: "Each one of us has our own personal journey in life, and each one of us has to make decisions about when we feel comfortable coming out. I would personally encourage every gay and lesbian person to come out, but that is not a decision for me to make or for the people leading this outing campaign to make."

But Rogers dismissed such criticism. "We're not really outing anybody. These people are already completely out." He said he preferred to call it "highlighting" the staffers' sexual orientation.

Rogers and Aravosis, both 40, live near each other in the Adams Morgan section of Washington. Rogers is a fundraiser for progressive causes, including the Harvey Milk School in New York, a high school for gay, lesbian, bisexual and transgender teenagers. Aravosis is a political consultant who once worked as a legislative assistant to Republican Sen. Ted Stevens of Alaska. In 1993, after President Clinton's abortive effort to win open acceptance of gays in the military aroused fierce opposition and turned into the "don't ask, don't tell" policy, Aravosis said he had an epiphany: "I knew I couldn't take it anymore." Sen. Stevens is a crusty old-timer, whose passion was the federal appropriations process (he now chairs the Senate Appropriations Committee). He "didn't care about gay stuff. He just supports the party line. But I was sitting at my desk, watching on TV as all the senators went off [against gays in the military], and something in my head said, You've got to get out of here and help."

Aravosis began sneaking over to Sen. Ted Kennedy's office in the evenings, where a friend on Kennedy's staff let him help on the Massachusetts Democrat's campaign to support the right of gays and lesbians to serve in the armed forces. Eventually he landed a new job at the Children's Defense Fund, and now he is a consultant and Internet political organizer. "It will be a cold day in hell before I vote again for a Republican at the national level," Aravosis said.

One of the most prominent victims of Rogers' campaign is Jonathan Tolman, a Republican staffer on the Senate Environment and Public Works Committee, which is chaired by one of the most socially conservative members of Congress, Sen. James Inhofe of Oklahoma. Several years ago, Tolman posed for a risqué photo spread in a free gay-oriented publication in Washington called Metro Weekly. His amateur modeling came back to haunt him when Rogers posted news of the Metro Weekly story on his Web site. Interviewed by the Washington Blade last week, a bewildered Tolman said, "My appearance in the magazine was a mistake on my part, mostly because I didn't know what it involved. I know now." He criticized the outing campaign as "kind of fascist."

Rogers responded that Tolman had outed himself with the photo spread in the gay magazine. Rogers also said he was careful to determine Inhofe's employment policies before publicizing Tolman's name; the Oklahoma senator's personal office policy does not hire gays or lesbians, but he does not impose the same restrictions on his committee staff, where Tolman works. "We don't want to get anyone fired," Rogers said, claiming that he declined to expose a gay member of Inhofe's personal staff because that person's employment would be threatened.

Rogers said he has listed between 15 and 20 congressional staffers' names on his Web site and two lawmakers as well: Sen. Barbara Mikulski, D-Md., and Rep. Mark Foley, R-Fla. Rumors about both lawmakers' sexual orientation have been raised for years. Last year, Foley dropped out of the race for the Republican nomination to succeed retiring Democratic Sen. Bob Graham in Florida after the stories about his supposed sexual orientation resurfaced. Foley cited his father's illness for his departure from the race. Although Foley has vowed to oppose the federal marriage amendment, Rogers said the Florida congressman was still fair game because he supports Bush's reelection. Mikulski, who initially remained mum about her stand on the amendment, in effect voted against it on Wednesday's procedural vote and thus is now off Rogers' list.

Heroes to some, "fascists" to others, Rogers and Aravosis are determined to continue their controversial exposure campaign. To those who would call it blackmail, the two activists insist that until Congress stops debating the federal marriage amendment, the better term is "fair play."