How yesterday's gun-totin' gangsta rapper turned into today's cartoonish mack daddy -- cuddly and cute enough for even the white kids from the burbs. 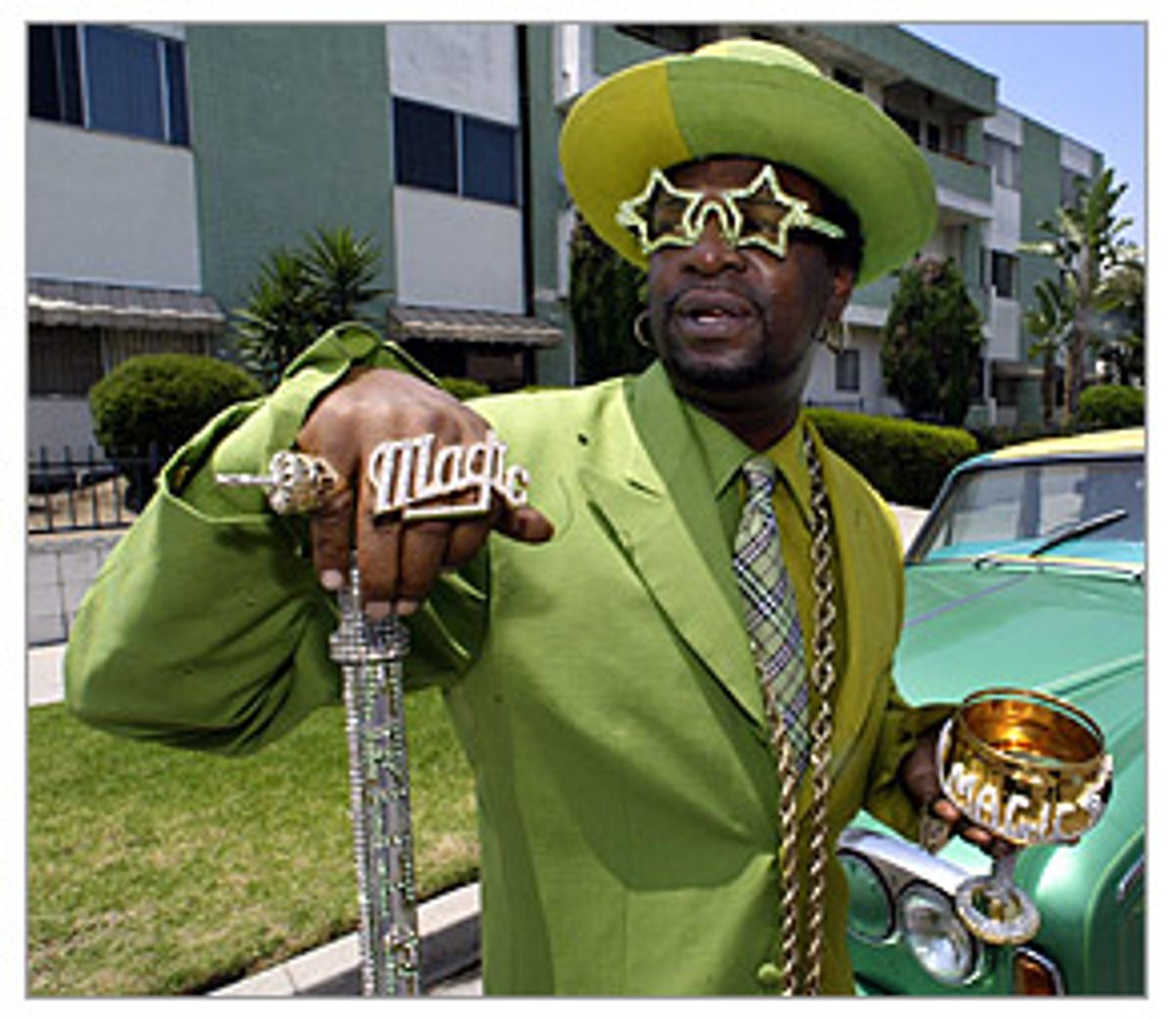 Bishop Don "Magic" Juan isn't a pimp, but he plays one on TV. He's had cameo roles in cinematic gems like "Old School," "Starsky and Hutch" and "S.W.A.T"; in glossy rap videos by Snoop Dogg, 50 Cent and Nelly; and, most recently, on the UPN sitcom "Eve." The sleazy yet avuncular Juan finds it natural to play a pimp because back in the '70s, he was one. He's reformed, now: a dubiously ordained man of God who still sports full-on pimp regalia, a so-called spiritual advisor to rap stars and author of the would-be bestseller "From the Pimp Stick to the Pulpit."

Visiting Juan in his Los Angeles apartment, as I once did, is like entering a time warp. Bypass the 1976 Rolls Royce parked out front and step into a living room straight out of "Superfly" -- chenille sofas, shag carpets and mirrored wall paneling etched in gold. Juan wore a rainbow-colored leisure suit, shoes tie-dyed to match and shirt unbuttoned to the waist. He poured himself a pint of Hennessy and did what pimps and preachers do best: talk. For nearly two hours. After which he showered me with gifts -- a Playboy T-shirt, a sample-size vial of perfume, an autographed photo -- and exhibited the mainstream press he's gotten over the years.

"It ain't like it was in the '70s and '80s, when people were like, 'oooh, pimping -- that's a bad thing.' Now everybody wanna be a pimp," he cackled, unleashing a folder full of clippings on the glass coffee table. He waved one in the air. "They even put me in the L.A. Times! Watch the E! Channel and you'll see a 'Player's Ball' -- and it's all white folks there! This is a new mackallennium, baby!"

Juan wasn't exaggerating. "Pimping" has not just become an urban pop-culture staple, it's even spread to the hinterlands. Take multi-platinum, omnipresent rapper/producer Lil Jon, who's never without his favorite accessory: the glimmering goblet known as a "pimp's cup" (which I personally witnessed him cart around a nightclub, casually insisting that bartenders serve his drinks in it). And now, thanks to Lil Jon, Snoop Dogg, Don "Magic" Juan and others who've popularized it, little Joey in the suburbs can now purchase his own rhinestone-encrusted pimp's cup -- maybe from PimpWear.com, one of the many teen-friendly outlets peddling pimp paraphernalia, maybe to match a T-shirt from his favorite new brand, which he thinks is way cooler than Phat Farm: Pimp Clothing Co.

Young Joey is also targeted for the forthcoming flash animation film "Lil Pimp," about a freckle-faced, 9-year-old white boy who learns the ways of the block. Featuring the voices of Bernie Mac, William Shatner and Jennifer Tilly, "Lil Pimp" was originally a Columbia Pictures release. But after its mere title made black activists squirm, and after half the audience reportedly walked out on one test screening, straight-to-DVD seemed a more reasonable option.

Pimp juice -- defined by the unofficial but authoritative online urban dictionary as: 1. "that certain j'ne se quoi [sic] that attracts the opposite or same (not that there's anything wrong with that) sex"; 2. "a liquid substance that makes even white folks pimptastic and pimpalicious" -- can, thanks to rapper Nelly, be purchased at your local supermarket. His energy drink (yes, called "Pimp Juice") recently added the U.K., Japan, the Caribbean and Israel to its already extensive distribution map. The drink sold a million units in its first few months on the shelves, which is more than most albums sell in years.

Juan has shamelessly milked the popularity of "pimping" for all it's worth; he has, to use popular parlance, expertly pimped his pimping. Be careful how you tell him that. "Ah, the word 'pimp,'" he began, leaning back and scratching his beard. "Nowadays people say, 'you're pimping that movie,' or 'hey, I'm pimping my good looks,' or they're 'pimping' this and that. Let me tell you: The only way to 'pimp' is to have a girl on the street."

MTV begs to differ. Its popular series "Pimp My Ride" -- designed, says MTV's Web site, to "show you how to transform your tired old hatchback into a full-fledged, fully loaded pimp chariot," and hosted by "pimp master of ceremonies, [rapper] Xzibit" -- employs "pimp," sans sexual denotation, as noun, adjective and verb. Tech TV jumped on that bandwagon, schooling viewers on how to "pimp out your cellphone." I found this headline in a New Hampshire paper last year: "Pastor rips candidates who 'pimp' black church." And on the first episode of Fox's new sitcom "Method and Red" -- an atrocious cross between "Amos n' Andy" and "The Fresh Prince of Bel Air," with Will Smith replaced by Cheech-and-Chong-style rappers Redman and Method Man -- I counted at least four "pimp" jokes, including this one: Uptight white mother berates hip-hop-loving son for listening to "an X-rated nursery rhyme that objectifies women"; young white boy innocently rejoins, "'objectify' -- is that like 'pimping'?"

But while it may have only recently trickled down to the suburban Joeys, pimp iconography is almost as old-school as the oldest profession itself. By the time the Hughes brothers unwittingly ushered in the pop-pimp craze with their 1999 documentary, "American Pimp" -- released the same year as another low-budget cult favorite, "Pimps Up, Ho's Down," which is part pimp homage, part porn -- pimp protagonists had been strutting through urban imaginations for decades. Malcolm X is doubtless the most famous of them, but the trend hit a crescendo in the '70s, when it seemed every on-screen (blaxsploitation) or in-print (hard-boiled) narrative came complete with requisite broad-collared, cup-carrying Mack.

1969 produced the quintessential pimp saga -- called, aptly enough, "Pimp": a no-frills confessional by Robert Beck, aka Iceberg Slim. He and his kin are ancestors to today's pimp-happy rappers, some of whom are hip-hop greenhorns -- Nelly and 50 Cent took up pimp sticks for a track or two, while newcomer Lil Flip's debut single was called "Like a Pimp" -- but most of whom are aging has-beens. Ice-T, for instance, recently re-released his 2002 DVD "Pimpin' 101," which is chock full of world-wise tidbits like this one: "All of us are hos in one way or another, but very few will ever get the chance to pimp." (As he repeatedly reminds anyone who'll listen, Ice-T did get that chance: Before pimping his sordid past in rap tracks like 1990's "Pimp Anthem," Ice-T was, yes, a real-life pimp.)

But put someone like Iceberg Slim beside Ice-T (or Lil Jon, or any other pop pimp) and the difference is glaring. Slim's Pimp reads as a great big "fuck you" to white America: a bitter, brutal, no-holds-barred account in which sticking it to the man was best accomplished by pimping his woman, to white and black men alike. To "own" the white goddess, to soil her supposed purity, was to hit the white man where it really hurt. Even the more commercialized pimps of blaxsploitation culture carried themselves impudently, as if to subtly, slyly hold their middle fingers in the air.

The only thing today's pimp icons hold in the air is a paycheck. Over-the-top "pimpalicious" rappers, "pimped-out" hatchbacks -- they've done what only pop culture can: transform the very real, very vicious legacy of pimping into cheerful buffoonery or hip slang. "Pimping" is now fun. It's a campy little accessory that matches a grin and a bow, a cutesy cartoon designed to amuse the sort of people Iceberg Slim was railing against. To reference pimping today -- whether via noun, verb or adjective -- is to have it both ways: It's to tap the well of hyper-masculine "cool" that's long been stereotypically associated with African-American men and especially those of the Shaft variety, while at the same time defusing anything potentially threatening about such a forceful pose. What could possibly be threatening about "pimping" a cellphone? Or about party-happy Nelly beaming beside his can of "Pimp Juice," or Big Snoop Dogg, shizzling his nizzles in an over-the-top Cadillac?

"Snoop the Pimp" is, after all, far more mass-marketable than "Snoop the Gangsta," which was the rapper's '90s incarnation. Ageless American icons that they are, gangsters had their hip-hop heyday in the gangsta-rap-loving '90s; they reared their heads again in recent rap, after 50 Cent made many believe in gangsta rap's reincarnation. But gangsterism, then and now, proved a little too real for mom and dad. They worried that their child's favorite rapper didn't just talk about having guns -- he actually had them. They're not worried, though, that when he's not in the studio, Snoop or Lil Jon or Nelly is actually out on the street, overseeing a gaggle of girls. Pimping is simply a persona or an expression, and everyone knows it. Gangstas were controversial because they toed the line between real and fake; today's pimps are fake as fake can be. Little Joey can talk all he wants about pimping his new tricycle. No one has to fret that it's the germ of his hustling career.

We might soon see, however, the first nail in the pimp-happy coffin. John Singleton is producing the independent film "Hustle & Flow," about a former pimp who sets off to launch a rap career. Starring rapper Ludacris and featuring a cameo from Isaac Hayes, "Hustle & Flow," by all accounts, has one thing that makes it potentially different from the other pimp products on the market: gritty realism, a good dose of which might be enough to remind MTV viewers that "pimping your ride" does have connotations that are, alas, neither cute nor cuddly.