Her partner was kidnapped and beheaded. Now, charges Ukrainian journalist Olena Prytula, the government is using the courts to shut down her crusading Web site. 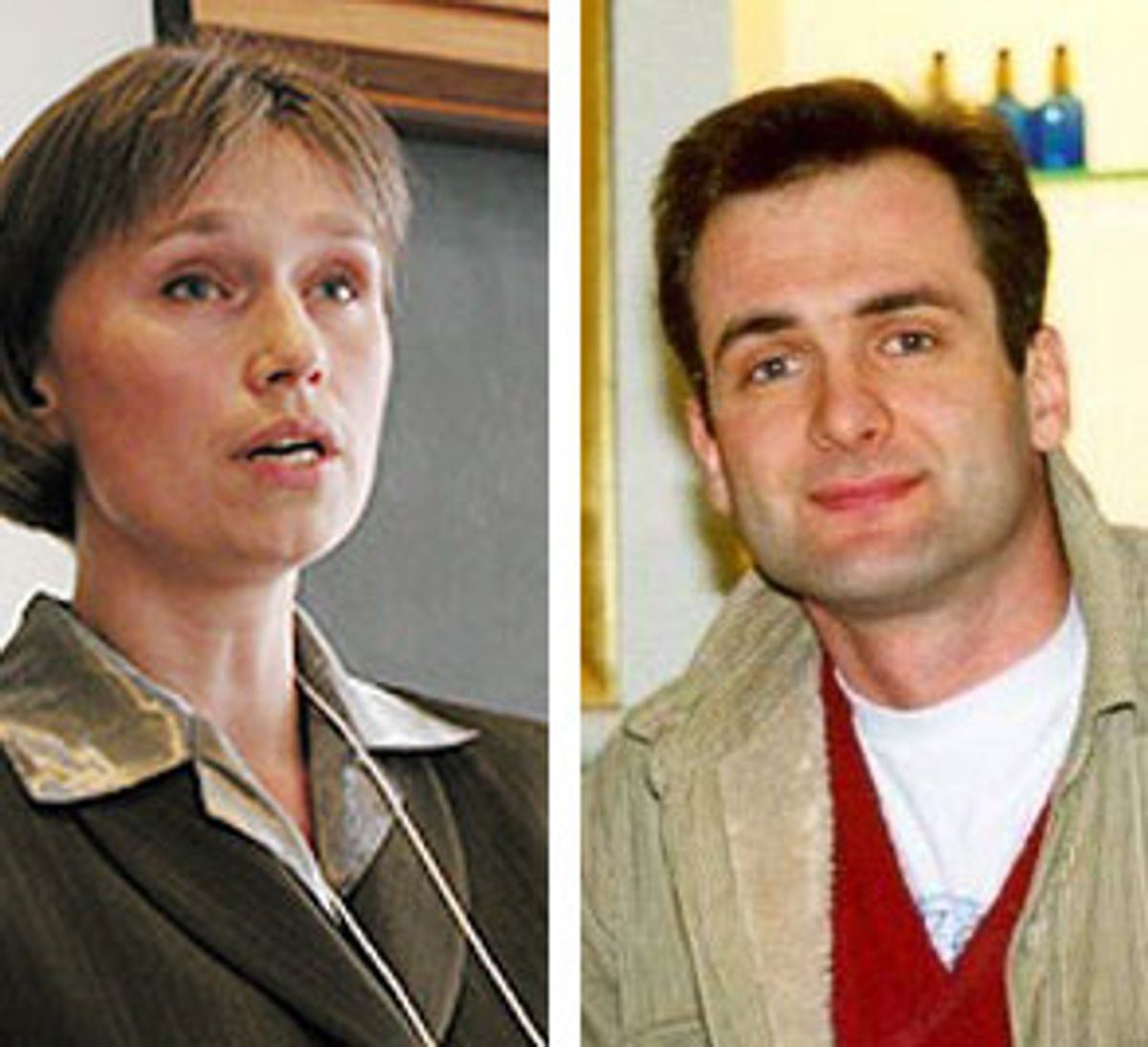 The beheading of Georgi Gongadze, a crusading journalist who uncovered corruption and cronyism in the Ukrainian government, couldn't silence Ukrayinska Pravda, the muckraking Web site he founded.

But almost four years after the 31-year-old's headless body was discovered in a ditch in a suburb of Kiev, a libel lawsuit threatens to do what murder couldn't achieve: shut Ukrayinska Pravda down. The plaintiffs are contesting articles that allege their involvement in a coverup of who was really behind the murder of Gongadze.

The details are murky, as the plaintiffs were unavailable for comment to elaborate on the details of their lawsuit. But the key point, according to Olena Prytula, the editor in chief and co-founder of the Web site, is that the lawsuit isn't just demanding a retraction but is also aiming to close down the publication. And the timing for that couldn't be better for the very same politicians against whom the Web site has been on the warpath: A national election in October will determine the successor to President Leonid Kuchma, who is accused by a former bodyguard of personally ordering Gongadze's killing.

For now, Ukrayinska Pravda, powered by a half-dozen journalists and led by Prytula, is still publishing articles that rip into Kuchma's loyalists with headlines like "Who Really Wears Pampers in Ukrainian Politics?" and "10 Ways Ukraine Is a Neo-Soviet Country." The notoriety of the Gongadze case has been a protection of sorts -- any further heavy-handedness would spur more worldwide attention to an already controversial case. Still, Ukrayinska Pravda's breed of outspoken opposition journalism is unusual in the post-Soviet Ukraine, which suffers from state censorship of its broadcast and print media.

"Internet was and still is the only place without censorship," explains Prytula, sipping coffee in a Starbucks in San Francisco. Overseeing the site remotely while on a John S. Knight fellowship at Stanford University, Prytula is an athletic-looking, fair-skinned blonde who recently hiked the Inca Trail to Machu Picchu and enjoyed the strenuous trek so much she wants to do it again. But instead, she will return to Ukraine at the end of July to fight the lawsuit and continue covering the run-up to the election.

The tale of Gongadze, Prytula, Kuchma and Ukrayinska Pravda reads like a 1950s film noir plot transplanted into a 21st century post-Soviet morass. Parts of the story have been well reported, but the twists just keep on coming. In the years since Gongadze's death, as his lurid murder remained unsolved, secret tapes made by a former presidential bodyguard, who now has asylum in the United States, surfaced suggesting that Kuchma himself ordered the killing. The government argued that the tapes had been doctored to put words in Kuchma's mouth. Then, a key witness in the case mysteriously died in police custody, and his body was quickly cremated. Now, the government claims to have a confession, although they refuse to name the killer, calling him only "K."

"They said nothing about him, just that he is in prison, and he will be there for the rest of his life because he murdered several people," says Prytula. "Nobody believes it."

When Gongadze went missing, his disappearance, followed by the circumstances of his death, became a national cause célèbre, prompting protests in the streets that continued for years. In Ukraine, an agrarian country of some 50 million people, most of whom do not have Internet access, the story of the beheaded Internet journalist who'd taken on the government, and perhaps been murdered for his stance, spread beyond computer screens.

For months, Prytula found herself with state-funded bodyguards. But if the state had been responsible for the death of her partner, who were they protecting her from? Paradoxically, the attention following Gongadze's death meant that Ukrayinska Pravda was untouchable, and it continued to publish as it liked.

"It's been a very well publicized case, and it seems as if that's one of the reasons why the authorities have kept their hands off this Internet site, because it would have been pretty obvious if they had stifled it," says Nina Ognianova, a research associate for Europe and Central Asia for the Committee to Protect Journalists.

"Over the past three and a half years, the authorities did not dare to undertake any serious attempts to pressure the Ukrayinska Pravda," stated a May 22, 2004, editorial on the site. Then came the libel suit, which the editors consider an indirect attack from the government. In the editorial, titled "We Shall Overcome," the editors reiterated their argument that the plaintiffs in the case against them are agents of the presidential chief of staff who were involved in covering up a presidential involvement in the Gongadze murder.

But libel isn't really the issue, Prytula argues. A contentious presidential election, scheduled for Oct. 31, is fast approaching, and the journalists at Ukrayinska Pravda are convinced the case is simply another attempt by the government to silence them. Prytula also maintains that it will be impossible for Ukrayinska Pravda to get a fair hearing in the court that will be hearing the case.

The editorial says that one of the plaintiffs, Maria Sambur, then working for another site, the Institute of Mass Information, doctored the letters of the witness in the Gongadze case who died in jail. The omitted passages allegedly accused Kuchma of involvement in the case.

The plaintiffs, Sambur and Valeriy Vorotnik, did not respond to requests to be interviewed for this article.

"It's a common technique in the former Soviet Union to try to cripple media outlets that are very critical of the government or associated with the political opposition by filing for civil damages, and by the granting of really prohibitive civil damages," says Rachel Denber, acting director of the Europe and Central Asia Division of Human Rights Watch. "Sometimes the damages awarded seem more aimed at crippling the outlet than at redressing a tort -- a civil wrong."

But the Committee to Protect Journalists, a group that has sharply criticized the Ukrainian government for its treatment of journalists -- it named Kuchma one of the 10 worst enemies of the press in 2001 in part because of the Gongadze murder-- cautions against assuming that the lawsuit against the site is an example of the nefarious workings of the government's tightening grip.

"So far there hasn't been anything out of the ordinary in the case," Ognianova says. "It seems like it's a case in which two private citizens are looking for civil redress," although she does say that her organization is monitoring it. "Because it's a civil claim we have to really wait and see how the courts will react and whether they will make a fair decision."

The government's statement that the killer has been found and is already in prison seems a little too convenient to most observers of the case, especially following on the heels of a story in the London-based Independent uncovering new evidence that Kuchma sought to impede the investigation.

The prosecutor's official announcement of a break in the case has been eyed askance by international watchdog groups. "We urge the prosecution to pursue every lead in the case and to investigate fully allegations involving President Kuchma," said Ann Cooper, the executive director of the Committee to Protect Journalists, in a statement.

"We do not know who killed Gongadze, but we know there have been serious failures in the way that the case has been investigated," writes Simon Pirani, chairman of the London Freelance branch of the National Union of Journalists, in an e-mail. "If Gongadze's killers get away with it, this will be a green light to bullies and dictators all over Europe to kill journalists as and when they please. The assassination of the investigative journalist Paul Klebnikov in Moscow last week shows that the danger persists."

The atmosphere for journalism in Ukraine is becoming ever more stifling, as witnessed by the recent closing of two radio stations. "We just feel the grip around the media is getting tighter and tighter," Ognianova says. "It just seems as if the government is trying to stifle opposition voices right around election."

Does that make Prytula apprehensive about going back to Ukraine after her lengthy sojourn in the United States? Is she afraid for her own life?

Absolutely not. "I'm not afraid of death," she says. "Georgi's death taught me that that I have to enjoy every moment of my life, because it maybe the very last second."