Laughing all the way to the White House

Bush successfully plays the joker to Cheney's straight man. But will Kerry and Edwards have the comic chemistry to upstage them? 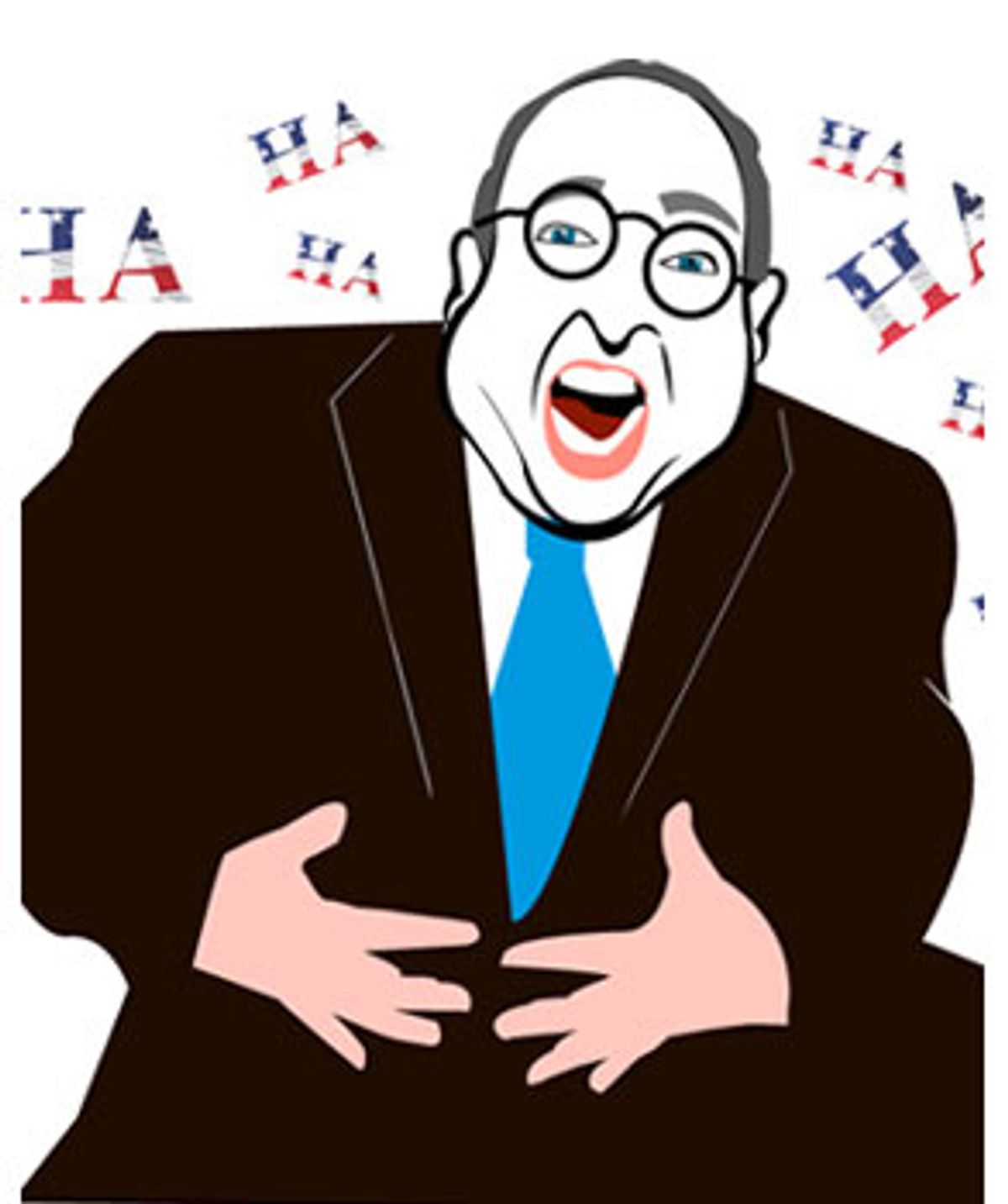 Astute political observers know that presidential tickets need to be delicately balanced -- just like a good comedy team. In John Edwards, John Kerry must have felt that he had found a partner who could help him connect to audiences, with whom he could develop a sense of timing and who had skills and a personality that complemented his.

Thinking of the candidates as potential comedy teams doesn't mean imagining something as nutty as a Marx Brothers performance. Their gigs don't need to be hysterically funny, just effective in wooing voters.

If there is one thing that is clear about the Bush administration, it is that President Bush is the comic on his team and Vice President Cheney the straight man. Bush enjoys hearing and telling jokes, and he is forever making wisecracks, like Bob Hope in a "Road" picture. He even uses one of the great comedy team techniques -- misspeaking. That's exactly what Gracie Allen and Lou Costello did.

And who makes a better straight man than Cheney? He is perpetually sober, has that slight and wry off-to-the-side smile and can be belligerent on occasion.

Bush and Cheney perform well together, and audiences like them. It is surprising that they don't appear in public together more frequently. Security reasons may argue against their doing so, but their compatibility, along with the president's humor and the vice president's gravitas, would help them with voters in a way that appearing separately does not. Good comedy team members invariably improve each other's performance when they are together.

Oddly enough, presidents are more often the comics on a political team, most notably in the cases of John Kennedy and Lyndon Johnson and Bill Clinton and Al Gore. In the cases of George H.W. Bush and Dan Quayle, the vice president was the comic on the team. So far we've been lucky and haven't had a presidential ticket with two comics. Such a team would be in danger of being, in Stan Laurel's characterization of Laurel and Hardy, "two minds without a single thought."

On the newly formed political team, Kerry is the straight man -- serious, intelligent, clearly in control of the pace of his campaign, as much the authority as a Bud Abbott. But Kerry has mixed skills as a straight man, at least in these early days of the partnership. His speech is rather wooden, so he could end up leaning on rather than leading his partner.

It is too early to tell, however, whether Edwards will emerge as the comic or a second straight man. Undoubtedly, Kerry picked Edwards to some extent because of the North Carolina senator's warm and exciting personality, boyish, attractive appearance and effectiveness with audiences. Only the course of the campaign will reveal whether his personality includes humor and whether his boyishness has an element of childishness, two signs of a traditional comic. The campaign will be immensely helped if Edwards finds and lets loose any comic elements that lie inside him. His smile is a good start. Now he needs some one-liners.

Voters recognize that a complex world requires two fully engaged partners, and they want a well-balanced team. Americans also want the life-and-death seriousness of public policy issues leavened with some lighthearted humor. That mix can sound odd coming from one person in one speech -- only a team working together can provide it effectively. Bush and Cheney and Kerry and Edwards may want to take a moment out of their busy schedules to examine whether the road to the White House might run through Morocco.