At the speed of blog

After a Republican congressman resigned unexpectedly, a lefty blogger called for readers to send money to his opponent -- and the cash poured in. 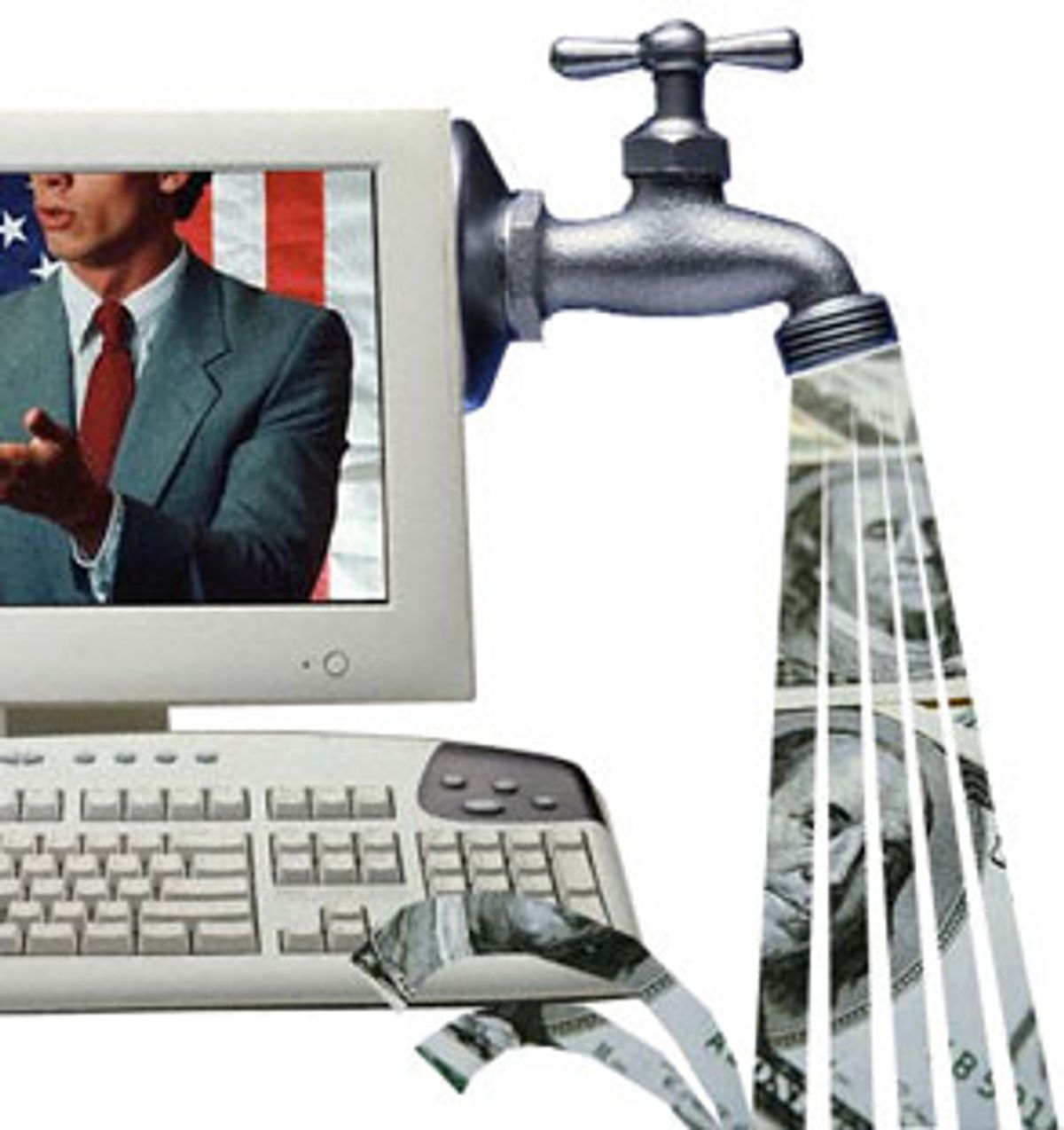 On Monday afternoon, July 19, Stephen Yellin, a 16-year-old politics junkie and frequent contributor to the lefty blog Daily Kos, noticed an intriguing development in Pennsylvania's 8th Congressional District, an area to the north of Philadelphia. The Capitol Hill newspaper Roll Call was reporting that Jim Greenwood, the district's popular, moderate Republican congressman, had unexpectedly decided not to seek reelection, meaning that his House seat was now up for grabs. This is the sort of news that sets partisans like Yellin jumping for joy, and so, of course, he blogged about it.

"I would suggest that we get involved ASAP," Yellin, who goes by the handle MrLiberal on Daily Kos, wrote. Virginia "Ginny" Schrader, the Democrat running for the open seat, "supports civil unions and is against Bush's positions on Iraq and the Patriot Act," he noted approvingly. But she was woefully low on cash -- as of June 30, Schrader had only $7,000 in the bank. Yellin implored Daily Kos' politically obsessed readers to change that situation: "This is completely out of left field, folks, and it gives us another opportunity for a pickup," he wrote. "Ginny Schrader is the luckiest candidate in the nation today, but can her luck hold?"

What happened next was beyond anything that Yellin had expected. Hundreds of people began pitching in, documenting their small donations in the comments threads of Daily Kos and other blogs: "$25.01 coming from me." "$30.01 from me too." "Yeah, this liberal kicked in $20.01." (Daily Kos readers add in the extra penny as a kind of signature for the site, letting a campaign know where the money's coming from.) The tide came in for at least two full days, and when it was over, Ginny Schrader, a candidate who was recently unknown to even the most obsessive campaign watchers, found herself flush with more than $30,000. She was suddenly a political force to contend with.

Thanks to blogs and the Internet, we now live in an age when news can be translated into action -- into money -- in no more than the time that it takes to post a paragraph online. What happened to Schrader was not novel; it's a phenomenon we've seen dozens of times in the past year, ever since Howard Dean put himself on the map with an extraordinary day of fundraising last summer: It starts with a small, hopeful appeal posted on a blog, something short and sweet and inspirational. And then, out of nowhere, the money starts pouring in. Loads of money -- more money than anyone involved in the process had ever dreamed of. In his one-day push last June, Dean raised more than $800,000, a trick he repeated several times during his presidential campaign. In a two-week period in January, readers of blogs sent $80,000 to Ben Chandler, a Kentucky Democrat running for Congress. Stephanie Herseth, running for South Dakota's House seat, saw similar unexpected money spikes during her campaign this spring.

The most newsworthy point about this latest episode of online fundraising is perhaps how normal it's become. The blogosphere and its readers are on hair-trigger alert, ready for any new development to spur them into action; this is especially true of the left-leaning online communities, where people seem to be as fond of making political donations as they are of making fun of George W. Bush. But what makes them do it for a particular candidate? Why do people online suddenly come together in hordes, aligning themselves behind Ginny Schrader, Ben Chandler, Stephanie Herseth and Howard Dean -- while dismissing some of the dozens of other candidates who regularly advertise on blogs in search of such pots of gold?

The answer, alas, is nobody really knows. In interviews, neither the bloggers on Daily Kos, the officials in Schrader's campaign or some of the people who donated money could fully account for what exactly caused hundreds of people to decide, en masse at the same time, to open up their wallets for a woman they'd just discovered. Obviously it had something to do with newfound opportunity -- Ginny Schrader's luck only turned after it was announced that her opponent would be dropping out. But was it only that? Was there something about Schrader that appealed to bloggers? Certainly, that mattered too. Liberals appreciated her positions on certain issues. But at the same time, Schrader was untested in a major political campaign. Why didn't this bother people?

Yellin says that maybe the secret to Schrader's success can be found in the way he wrote his original appeal. People have told him, he says, that he phrased his praise for Schrader in a particularly artful way, inspiring many to support her despite her status as a novice. "The term I've heard used is 'kingmaker,'" he says. (This would ordinarily be an odd thing to hear a 16-year-old say, but Yellin's no ordinary teenager. When Salon called, he was in the middle of a photo shoot with the New York Times.)

Yellin is not sure that Schrader's success was all his doing. "I wouldn't call myself a kingmaker, though I feel very, very honored to be part of this. I think it's that people online are so dedicated, so fired up, they're willing to do whatever it takes to get people elected. It was the combination of the way I wrote it, but also the political climate."

Jerome Armstrong, the proprietor of MyDD, another popular political blog, agrees that the political climate had something to do with Schrader's success. But the most important thing, he says, is the sense of "community" felt by the readers of political blogs. Until Monday, Armstrong had never heard of Ginny Schrader. Then he got an instant message from Markos Moulitsas Zuniga, who runs Daily Kos and is Armstrong's partner in a political consulting firm, with news of Greenwood's departure from the race. He took a look at Schrader's Web site, and "I told Markos this has the potential of getting big quick."

How did he know? Armstrong -- who used to work in Howard Dean's campaign, where these money floods were a normal thing -- says he can't really put his finger on it. "You learn to recognize it," he says. He and Moulitsas sent in their own donations to Schrader, signaling to their readers that they were in full support of the candidate. "And then we just sat to the side and looked on," Armstrong says.

When Armstrong, Moulitsas and Yellin had all played their hands, that's when the readers started really jumping on the Schrader bandwagon. According to some estimates, the money was coming in at the rate of about $3,000 an hour on Monday night and Tuesday morning. It's probably fair to say that at this point, a kind of madness had overcome the denizens of the lefty blog, and many of them were giving Schrader money just because they knew that others would be giving. "There's a whole stimulus-response type of reaction to it," Armstrong says. "It feels good. Joe Trippi" -- who headed Dean's campaign -- "used to tell me that people would give because they felt that other people would give and they didn't want to miss out. They'd want to be able to say, 'I was part of this thing. It's bigger than me, and I wanted to be part of it."

Benjamin Rahn, the president of ActBlue, a political action committee that runs a popular Web site that allows people to donate to Democrats of their choosing, echoes this thought. "One of the exciting things about online fundraising is that it gives people who are giving small amounts very tangible evidence that they are part of a strong community that, together, will be giving a lot. It's not because people are writing $2,000 checks, it's because you can see that lots and lots of people are sending in money."

And people also donated to Schrader just to show that the Web -- and Daily Kos in particular -- is a powerful political force. Jon Schiffman, an attorney in New York who is a very dedicated fan of Daily Kos and who gave $75 to Schrader, says that "there was a sense that this is something you do because you want to support Markos as a player among the big people. We wanted to show that there's an activist base out here and we should be listened to."

They got their wish, too. When Greenwood first dropped out, there was some speculation that the Democratic Congressional Campaign Committee would look to replace Schrader with a candidate who'd had more political experience. Until this week, Schrader's campaign had not really taken off. According to Brian Welsh, the campaign manager, Schrader, who handily won a primary contest to become the nominee in April, was still working at her day job, which left her few opportunities for fundraising. (Until this week, the campaign's biggest fundraising event was a screening it arranged for the Michael Moore film "Fahrenheit 9/11"; the campaign raised $1,100.) Now that the seat was open, would the Democratic establishment look for a candidate that could at least raise more money?

The question was put to rest, Welsh says, when the money started coming in from the Web. "The Daily Kos was the wind on our sails that we needed to cruise through that 24-hour period; without that, this would have been very rough for us," he says. "And it all started with Stephen Yellin. I spoke to him earlier today and I thanked him about a hundred times."