Should we be outraged that Oscar winner Halle Berry is now prowling around in a skimpy catsuit? No, we should be irked that this movie doesn't objectify her more! 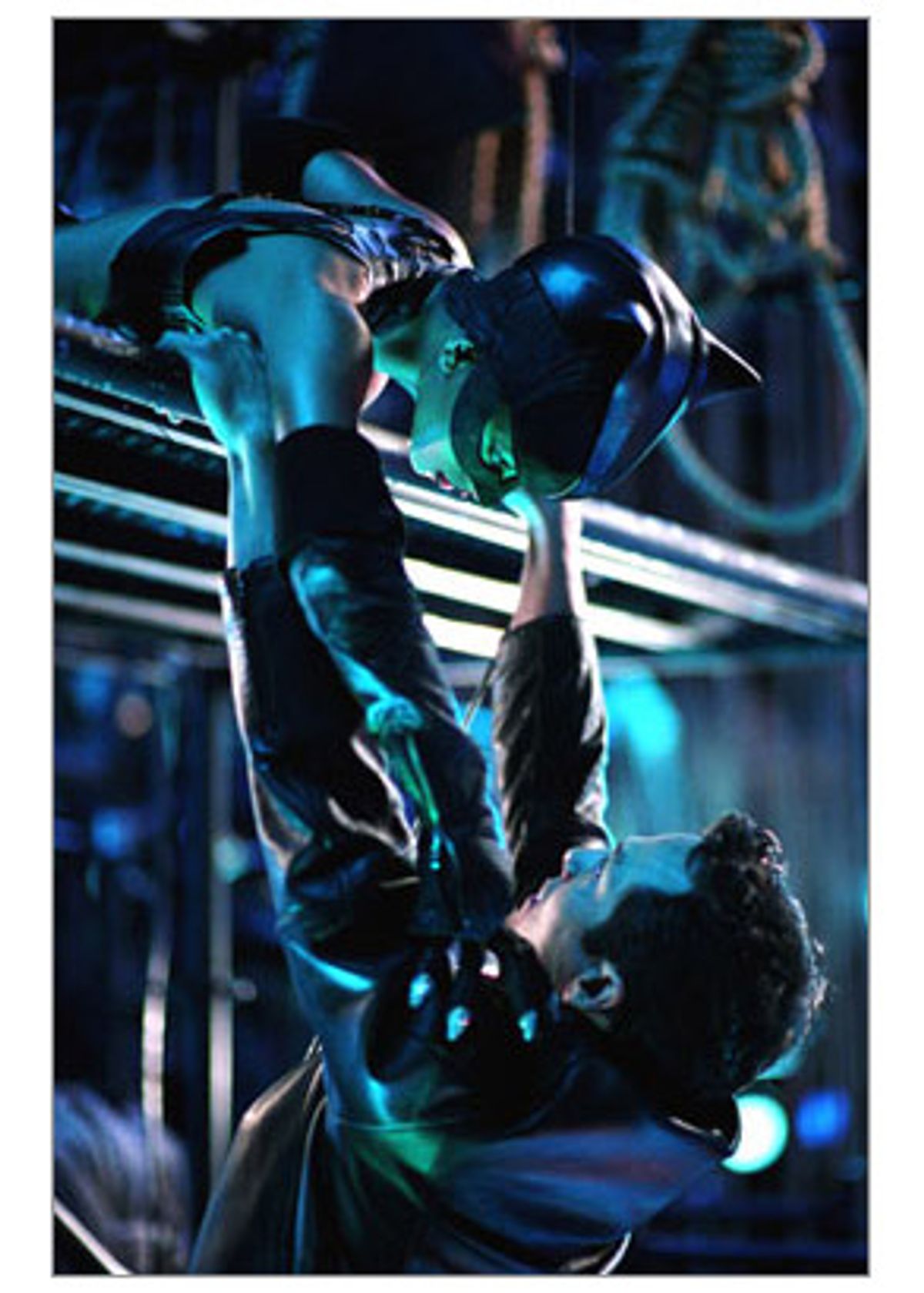 The problem with "Catwoman" isn't that it objectifies Halle Berry; it's that it doesn't objectify her enough. There are always going to be moviegoers who think it's demeaning for an actress to prowl around in a skimpy catsuit -- as if part of being a "serious" moviegoer means we need to deny some of the essential reasons any of us, male or female, go to the movies in the first place.

But the more unfortunate reality is that "Catwoman" barely acknowledges either Berry's luxe beauty or her quietly glowing charisma -- instead of basking in the considerable charms Berry has to offer, the director, Pitof (a name that seems naked, as if it should have an exclamation mark at the end), treats them like accessories to the picture's flashy, senseless cutting and overused special effects. Even if you believe that putting an actress into a slim leather modified Band-Aid outfit instantly turns her into a sex object and nothing more, isn't it more insulting when a movie has every opportunity to make an actress a sex object and fails?

When Berry isn't slinking around the city at night, she's mild-mannered Patience Philips, a graphic designer for a big cosmetics company headed by suave slimeball George Hedare (Lambert Wilson). Hedare is about to launch a new face cream. (It's called Beau-Line, a lousy name for an anti-wrinkle product, although the characters inexplicably pronounce it "Byoo-LEEN.") Patience, a hapless artist type who favors baggy, shapeless clothes, is in charge of the big ad campaign.

But there's a nasty secret behind Beau-Line, one that Hedare's conniving, ex-supermodel wife, Laurel (Sharon Stone, who looks great in a succession of slim, drapy outfits, but who should be a lot more fun than the movie allows her to be), is desperate to hide. When Patience becomes privy to Beau-Line's evil side effects, she's hastily dispatched and left for dead -- only to be resurrected by a special mystical cat: He brings a bunch of his four-footed friends, and they surround her lifeless body, resuscitating it with their goddess-given restorative purring powers.

That's how Patience becomes the glamorous, conflicted semi-superhero Catwoman, a powerful part-woman, part-feline who fights crime, sort of, when she's not inadvertently committing it. Patience becomes Catwoman at night, and on the morning after, she doesn't remember what she did the night before. Even so, "Catwoman" tries desperately to be a woman's empowerment fable. Patience learns that she's part of a long line of Catwomen, one of the lucky chosen few who live their lives unconstrained by the rules of society, following their own desires. (In most circles, going out at night and waking up the next morning with no idea what you did would be considered the exact opposite of empowerment, but never mind.)

The script was written by John Brancato, Michael Ferris and John Rogers, from a story by Theresa Rebeck and John Brancato and Michael Ferris. This Catwoman is based, but only very loosely, on the DC Comics character created by Bob Kane. (Her name isn't even Selina Kyle.) And unfortunately, she doesn't have the depth or growly complexity of the earlier Catwoman played by Michelle Pfeiffer in "Batman Returns." (It's interesting that when Patience is shown a collection of pictures of Catwomen of the past, we get a quick glimpse of Pfeiffer in her shiny latex cat mask -- it only makes us miss her more.)

The frustrating thing about "Catwoman" is that Berry does her damnedest to make the character work. Some of her physical moves are astonishing: Her offhanded grace is exceedingly catlike. In one scene, as Patience, she struts delicately and effortlessly along the back of a couch as she talks on the phone to a friend -- her feet barely seem to touch the surface. As Catwoman, dressed in a leather cross-your-heart bra and trouser combo, she cracks a bullwhip with vicious ease, and her saunter must have been modeled on the way some cats really walk. Although Berry's outfit was obviously designed to highlight her distinctly feminine qualities, her strut reminds me of that of a certain self-assured tomcat I know: It's a sexually confident sashay, one that's predatory and fascinatingly masculine. In a different movie, Berry might have had a chance to explore some deeper, darker crannies of sexual politics.

But in this one, she's all but lost. "Catwoman" was shot by Thierry Arbogast, the extraordinary cinematographer behind Brian De Palma's "Femme Fatale," among other pictures. (He frequently collaborates with Luc Besson, a director who has often been fascinated with putting aggressive yet seductive womanly power on the screen.) But for inexplicable reasons, the camera doesn't drink Berry's Catwoman in the way it ought to -- I felt I never really had a chance to savor her slinky movements, or even to get a really good look at her costume. The fight sequences are choppy and frenetic -- it's never clear who's coming at whom, or from where, and Pitof doesn't seem to really care. And the picture is marred further by too many computer-generated shots of Catwoman leaping across ledges and rooftops. Are we supposed to be more interested in the handiwork of some computer whiz than we are in looking at the real Berry?

The story gives Berry a flimsy love interest in the form of a cop, played by Benjamin Bratt, who's both intrigued by and antagonistic toward the elusive Catwoman. But their chemistry flops -- although it's hard to imagine how love, or even just lust, could ever take root in a picture that has as miserably pinched a sense of mystery and romance as this one does.

If "Catwoman" fails at the box office, it may be stupidly taken as proof that an African-American actress can't carry a big-budget movie. In a New York Times piece earlier this week, Sharon Waxman noted that if the movie is successful, it will place Berry in the category of the most highly paid women stars and will "signify yet another achievement for African-American actors."

Waxman understands the realities of the business: "Catwoman" needs to do well to prove Berry's worth as a star. Even so, I think audiences -- not to mention journalists -- should be wary of buying wholesale the idea that any actor's "value" can be judged on the strength of one movie's financial success. I hate to see Berry have to carry that burden, particularly in a picture that's so obviously bad in spite of her, not because of her. Why does Berry need to be the standard bearer just because of her sex and her race? And beyond that, while I'm painfully aware of the realities of the moviemaking business, I hate the fact that any actor (regardless of color or gender) should be judged by the box-office receipts of any particular movie. Denzel Washington is often used as an example of a male actor of color who can "open" a big-budget movie. But while Washington is sometimes a terrific actor, other times he's just a dull, worthy one: He gave a wonderful, jazzy performance in the romantic thriller "Out of Time," which did poorly at the box office. Yet the perfunctory performance he gives in Tony Scott's deplorable "Man on Fire" is the sort of thing Hollywood execs are likely to view as successful. (And as far as Hollywood's providing better roles for African-American actresses goes: Yes, they need better roles and more visibility. But if the answer is to give them boring, ponderously prestigious Meryl Streep-type roles, or roles that require prosthetic noses -- well, in that context, the flashy cat suit doesn't look half bad.)

The point is that while we have to acknowledge how Hollywood views actors (sadly, as meat rather than people -- or so it often seems), that doesn't mean we, as moviegoers, have to stoop to that level. Isn't it braver by far to ignore box-office receipts and Hollywood politics and to judge performances for their own sake? If anything, because Hollywood is so hung up on profiting off its actors, we should be more alive to the subtle gifts they're capable of bringing to us, regardless of how much their movies rake in. That's another way of saying that as bad as "Catwoman" is, we shouldn't make the mistake of considering it Berry's failure, or, worse yet, evidence of the unbankability of actresses of color. It's taking forever for actresses of color to find their footing in Hollywood. Berry, at the very least, is trying to stay on her toes as she leads the way.