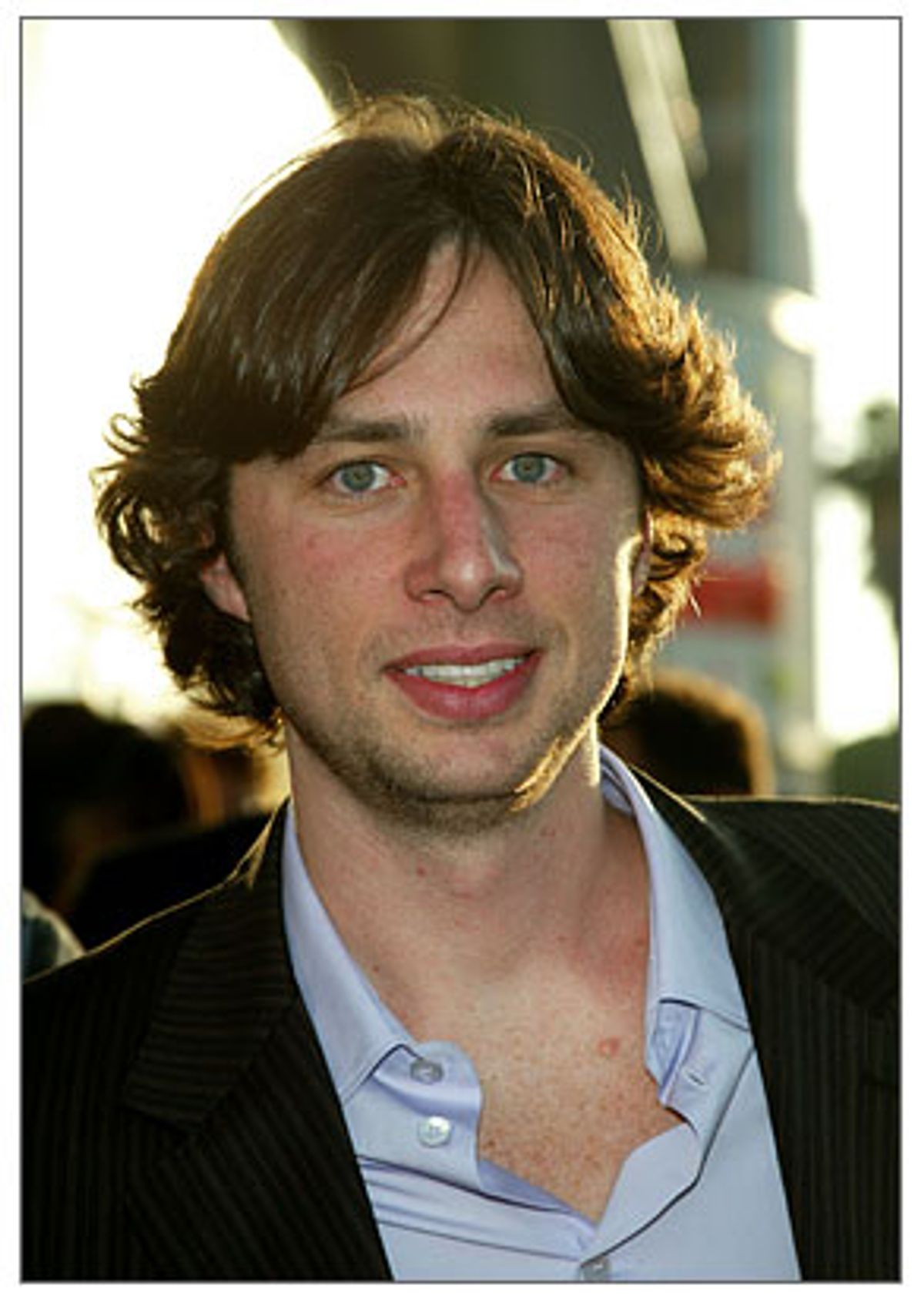 If it's easier for a camel to pass through the eye of a needle than it is for a sitcom star to enter the kingdom of filmmaking, Zach Braff is defying the odds with "Garden State," which he wrote, directed and stars in. Earning lots of early praise, the $2.5 million film was picked up at Sundance by Fox Searchlight and Miramax. After playing the goofy lead character J.D. in NBC's popular sitcom "Scrubs" for the past three years, Braff has created a semi-autobiographical role that reveals a more somber side and reflects his struggles as actor before landing a steady gig. At 29, Braff demonstrates a knack for witty dialogue and visually memorable scenes that form a sweet, understated story about rediscovering the past in order to leave it behind.

I spoke with Braff at the end of what looked like an exhausting day of back-to-back interviews.

What inspired you to write the movie and when did you start writing it?

What inspired me to write it was just stories from growing up in Jersey, and my experience with my friends, and anecdotes from my childhood there. And when I went to film school at Northwestern, I started thinking about what my first feature would be, and I thought that I'd use some of those stories in some way -- I didn't know exactly how.

Did you come to L.A. intent on making movies?

No, I moved to New York to make movies and also act at the same time. I thought I'd climb both ladders at the same time, and I was working as a production assistant and auditioning. Then I started to get work as an actor. I got cast in a production of "Macbeth" at the Public Theater, and then I got some independent films, and that eventually brought me out here, and I was waiting tables here, and then I got "Scrubs."

Were you hesitant to do TV at first? Because it sounds like you were pretty focused on film.

I was but I needed a job. I was broke. I just wanted to work. I hadn't worked in a long time, and independent films don't pay for you to live.

Is the main character, Andrew, in "Garden State" based on you?

Yeah, a lot of the stuff that I've been going through in my 20s and dealing with. That's definitely the jumping-off point.

Did you go through a similar crisis period in your life?

Yeah, that's what the movie's about. It's about 20-somethings going through that period where you're just sort of lost and confused and depressed, and that was the inspiration for the character.

One of the things I like about the film is that the turning points are based on very small experiences, like when Andrew goes to the quarry and meets that odd couple. Even though nothing much happens, it's almost like he's experiencing his life for the first time.

Well, he gets the necklace, which is a tiny thing, but you don't really see its importance in the movie until later. But when you look back, you go, "Well, what happens is he retrieves the one thing that'll give him the one happy memory he has of his mother."

Was it difficult to rein yourself in and focus on small details?

You didn't worry about the stakes not being high enough?

No, but that was the problem! That's why I couldn't get a studio to pay for it. Because I didn't have a three-act structure and I didn't have stakes and I introduced characters that didn't quote-unquote "pay off" -- that is, they don't come back.

So how did you get it funded?

Well, after everybody passed, this guy Gary Gilbert was a self-made, uh, wealthy person who decided that he wanted to finance films, and he read it and loved it, and he said if I could get the budget low enough, that he would pay for the whole thing out of his pocket.

And it was picked up at Sundance.

So there were obviously sacrifices, given the cast and the quality of the production. Did you have to eat beans all week to pay for that crane shot at the quarry, where the camera starts close up on you and Natalie Portman and Peter Sarsgaard and then flies back over this broad expanse?

Definitely. Well, that was actually a digital shot. But it was favors all around. It was everyone doing us favors. I mean, those digital artists, I met them, and we couldn't really afford what they deserved to be paid, but we said, "Here's the script. It's kind of different." And everyone just said, "I'll do it for almost nothing." The soundtrack -- "We'll get Coldplay for almost nothing." Everyone just sort of got on board with the project and just liked it, and it just sort of snowballed, and no one was working for what they deserved to be paid.

The soundtrack is great. Did you guide it closely?

Thanks. Yeah, I made this mix when I was sending out the script, and almost all of the songs were on the mix that I sent out. So when I got the film made, that's what I intended. A couple of extra songs added.

The song that the trailer is set to -- "Let Go," by Frou Frou -- is pretty incredible, and the lyrics work so well with the film.

We didn't imagine that the trailer would become the hit on the Internet that it has. At IMDb there's like this theory: People are like, "Yeah, I'm a 'Garden State' teaser-holic, I've watched it 30 times today."

Yeah, that's a project we did in-house -- literally in-house, at my house where we were cutting the movie -- the assistant editor had some time, and I said, "Why don't you cut a teaser, take this song, and these are my favorite images in the movie, and go cut 'em." And then she came back with that, and we were like "Wow, that was really good!" And then we showed it to Fox and they loved it, so...

It's a very modern trailer, because there are no words and it doesn't give away the story, so it's sort of a mystery.

I hate those trailers that tell the whole story. Unfortunately, we're cutting TV spots now, where some of them have to -- you have 30 seconds, so you have to tell a little of the story.

"He traveled back to a place he once knew..."

But it's nice that the trailer presents such a mystery about what happens in the story. And then when you see the film, because the images in the trailer are so memorable and beautiful, you stop and say: "Oh, so that's what was happening there!" For the whole movie, I was waiting to see the scene at the quarry, because that one shot is so jarring. It was almost a little distracting.

I don't know. I have seven months to think about it, I've gotta go do "Scrubs" for seven months, so I'm not sure what my next project will be.

Are you writing anything?

Yeah, I'm working on a bunch of things. But now I've been way too busy to really work as a writer.

Did you cast Natalie Portman because, like everyone else in the known universe, you're in love with her and want to have a million of her babies, or did you cast her because she auditioned?

No, Natalie Portman doesn't audition for movies anymore. I just think she's a magnificent actress and has something really unique. I don't think there's anybody quite like her. And I feel like, as a kid, in "The Professional" and "Beautiful Girls," she showed something that was so extraordinary, and I haven't really had a chance to see her do that as a young woman, and I was dying to see her [do that] because I knew she could. So she was the first choice.

Did you enjoy working with her?

She's great. She's just an amazing person. She's so humble and real and sweet and funny. I had a great time working with her.

So you do love her.

I do love her. I do want to have a trillion of her babies.

One last question about Andrew. He's a TV star and he's stuck and feels numb at the beginning of the film, and then sort of wakes up and gets passionate about his life. In making him be a TV actor, did you mean to suggest his numbness partly arose from his circumstances or his privileged existence?

But he's not living a privileged life. He's a waiter who's had one part, like I was.

I was in "A Broken Heart's Club," which was a huge indie hit, but I was waiting tables around the corner, and everyone came to the restaurant after. I waited on people who'd just seen the movie I starred in.