Live fast, die of melanoma and leave a well-tanned corpse 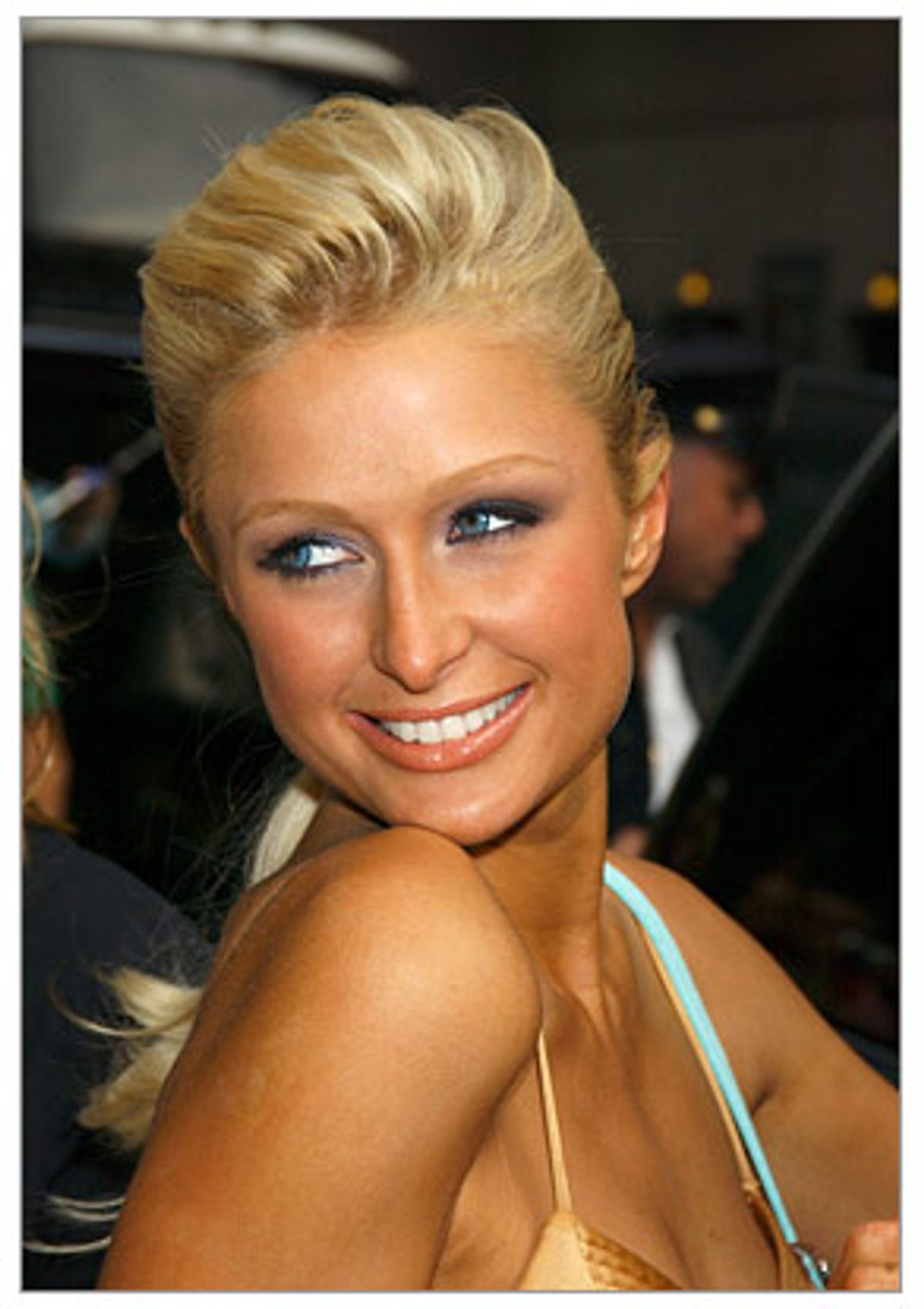 During her freshman year of high school in suburban Sacramento, Calif., kids made fun of Christine Sorba for being too pale. "They'd throw pencils at me and say they'd go through me, because I was as white as a ghost," says Sorba, a fair-skinned brunette.

A school dance was coming up, and Sorba wanted to look good -- so she found a solution in an indoor tanning booth. She was immediately hooked. "Now I go about three times a week and I feel that I look better in my clothes," says Sorba, now 18. She even works at a tanning salon, Maui Tan in Sacramento, making it easy for her to use her favorite 160-watt stand-up tanning booth. "My legs look a lot better tan," she said. "I have a lot more confidence in myself."

Every year, according to a recent study published in the Archives of Dermatology, more than 2 million U.S. teenagers visit tanning salons. Partly thanks to the $5 billion industry's aggressive marketing tactics, teens' passion for artificial tanning has surged over the last decade: 30 to 40 percent of 16- to 18-year-olds use tanning booths repeatedly, according to a recent Case Western Reserve University study -- despite doctors' warnings about skin cancer and wrinkles and the media's growing emphasis on sunless tanning methods. And the National Tanning Training Institute reported that the number of people who go tanning (loyal tanners consider it a verb), grew from 27 million in 2000 to 29 million in 2003. One of the fastest-growing segments of the market is female teens 16 to 19.

"Our prevention efforts are clearly failing," says Dr. James M. Spencer, vice chairman of the department of dermatology at the Mount Sinai School of Medicine in New York City. Pointing to a 2002 survey at Indiana University that found 92 percent of the young adult tanning-bed users were aware of the health risks, he said, "Kids know about the dangers. They know, and they don't care."

"Why should we care?" says Lauren Selicione, 21, of Boca Raton, Fla., who began tanning at 13. "Kids are going to do it because we want to have color. I think it will take kids seeing skin cancer for themselves to change. I don't believe anything until I experience it myself."

More young people are finding out firsthand the consequences of a killer tan. A 2002 study in the Journal of the National Cancer Institute reported that melanoma cases have increased by 60 percent among women ages 15 to 29 over the past three decades. And, the study found, tanning beds are partly to blame: People who regularly use tanning devices have 2.5 times the risk of squamous cell cancer and 1.5 times the risk of basal cell cancer, which are connected to cumulative U.V. exposure. Dermatologists are studying how teens' young, rapidly replicating cells may make them more vulnerable to skin cancer than those of a 35-year-old's, but the American Academy of Dermatology says one thing's certain: People receive about 80 percent of their lifetime sun exposure by the time they're 18.

Sorba started tanning after a childhood of watching her relatives revere the artificial rays' relaxation power. "I used to wait in the lobby when I was little and watch them come out of the beds in their bathing suits all happy," she says. "We all love to tan."

Lots of kids follow their parents into the booths -- giving them the impression that what they're doing is safe. A study in the June 2002 issue of Pediatrics found that if a parent or caregiver had tanned under sunlamps in the previous year, 30 percent of their children followed suit despite the risks.

Samantha Droge started tanning at 14 to cover a large scar on her back from when her cat scratched her as a young child. "I go in just about every day to maintain the color. I like having a badass tan," she says. "You can't see my bruises, freckles and scars."

Droge, 20, who works at E-Z Tan & Fashions in North Palm Beach, Fla., says she favors the convenience of artificial tanning. "I can get the maximum color in the minimum time, and I don't have to be in the sun, all hot," she says. "I don't have the time to sit outside all day." Rather than sweat for hours to maintain their tans, kids spend an average of 10 to 30 minutes in the beds. The problem is that tanning beds use more UVA rays, which penetrate deep into the skin, than UVB rays, which burn more rapidly. The threats of skin cancer and wrinkles never cross Droge's mind, she says. "I'll just get Botox, I guess."

The statistics don't faze Selicione either, even though some of her relatives have died from different types of cancer. "Anything I do is dangerous," she says. "I can drive my car and maybe die in an accident." Her younger sister Jaime, 16, says she's cut down on tanning after reading reports on the risks of sunbathing. "Now I just go every few weeks to maintain my tan, but I know my limits," Jaime says. "I'd go to the beach and sit out all day long, then go to the tanning salon afterward to even my tan, so I'd be, like, so burned."

Lauren Selicione says she won't stop hitting the beds -- a tan is too important to her self-image. "I'm 5 foot 6 and have an athletic body, but my tummy is embarrassing," she says. "My tan makes me look a lot slimmer." She says the tanned and toned bodies of celebrities, such as Christina Aguilera, account for much of indoor tanning's popularity. "The media wants us to look a certain way: skinny, blond and tan."

The radiant, bronzed-babe look of Hollywood is especially in right now (see J.Lo, Lindsay Lohan, Paris Hilton). "A lot of the celebrities who teenagers identify as sexy are celebrities who tend to be very tan. It's a big look in Hollywood," says Teen Vogue magazine beauty and health editor Kara Jesella, who often warns her readers of tanning's risks. "It definitely has an effect on teens who see their pictures in magazines and on TV and want to look like that."

The industry's aggressive advertising has also seduced teens. "In the last 10 years, salons have marketed heavily to high schoolers, advertising on billboards near high schools about tanning before vacations and prom," says Robert Dellavalle, director of the dermatoepidemiology unit at the University of Colorado Health Sciences Center in Denver. A 2002 study in San Diego found that most salons offer unlimited tanning packages, which allow patrons to pay a fee to come in as often as they like. Dermatologists say these packages are often snapped up by teenagers obsessed with maintaining a dark tan.

"The indoor tanning industry looks very much like the tobacco industry, the way it is targeting kids," says California Assemblyman Joseph Nation (D-San Rafael). "They're not subtle about it either. They say, 'Get a tan and have a better life.'" Twenty-seven states require parental consent for tanners 15 to 17 and turn away those 14 and younger. But Nation wants to go one step further. He authored a bill to prohibit California kids younger than 18 from using tanning booths unless they have a doctor's prescription. (Dermatologists use U.V. light to alleviate severe psoriasis and acne.) The Senate decided 19-9 against the highly contentious bill earlier this month but will consider the bill again next month when it is reintroduced.

A study released two weeks ago may also account for kids' fondness for the fake bake. Researchers at the Wake Forest University School of Medicine in Winston-Salem, N.C., found that the U.V. radiation used in indoor tanning may elevate the mood of frequent tanners.

Lauren Selicione can attest to that. "When I go into a tanning bed, it's like a little cave where I close myself away from the world. When I go lay out in the sun, I feel drained -- but in the bed, I feel relaxed. I can get away from my life and everything annoying. It's definitely addicting." Selicione denies she's "tanorexic" -- the term for tanners who make daily visits to booths but feel as if they're never tan enough -- but admits she's hooked: "When I say I need to get more tan, my friends say, 'Are you kidding me? You're so dark.'"

So why do teens still choose to go under lights -- especially when spray-on systems and self-tanning lotions are increasingly available in salons and drug stores, and promoted in teen and beauty magazines and shows like "Queer Eye for the Straight Guy"? "Spray-ons have definitely become more popular in the last two years, but they still are relatively new," says Jesella, the Teen Vogue editor. Last year, the Spa Association reported demand for spray-ons was up 67 percent compared with 2002, accounting for nearly $1 million in sales in the United States. "It's going to take more time for teenagers to become really comfortable with them the way they're comfortable with tanning beds," she says. "The first one or two times, some teens get streaky because they don't know how to do it. By the fourth time, they catch on. But a lot of teens don't have the patience. They want it perfect right away." There's also the cost of spray-on tans: Even though it has sharply declined from hundreds of dollars to as little as $15 in some areas, that's still too steep for many teens. "When I got airbrushed, I got great color and it lasted over a week," says Sorba. "But it's expensive. I found a woman who only charges $20, but I can't pay that every week."

Jessica Jordan, 19, who has worked at tanning salons since she was 15, is taking advantage of the alternatives. "When I was younger, I didn't care, but I'm a little more concerned about cancer now," she says. She used to tan four times a week, but now she rarely roasts more than once a month. "I like self-tanner lotions more than tanning," she says. "If you get the right one, it's not orange. And a $6 bottle lasts a month."

But Droge, the North Palm Beach teen, isn't a fan of self-tanners: "They wear off unevenly and crack on my arms and legs," she says. "I can never get it perfect." And Selicione says she prefers the caramel brown color she sports after lying under the lamps. She doesn't care if others think it looks too fake. "It's not orange," she says. "It's so brown -- I look like I'm from Costa Rica."

Cara Nissman, a former youth and family reporter for the Boston Herald, is a freelance writer based in Florida. Her e-mail address is cnissman@jkraft.net.