The undeniable appeal of John Edwards

The boyish running mate revived his Two Americas speech with surprising verve Wednesday night. Why, he sounded positively Reaganesque -- which is precisely what has Republicans worried. 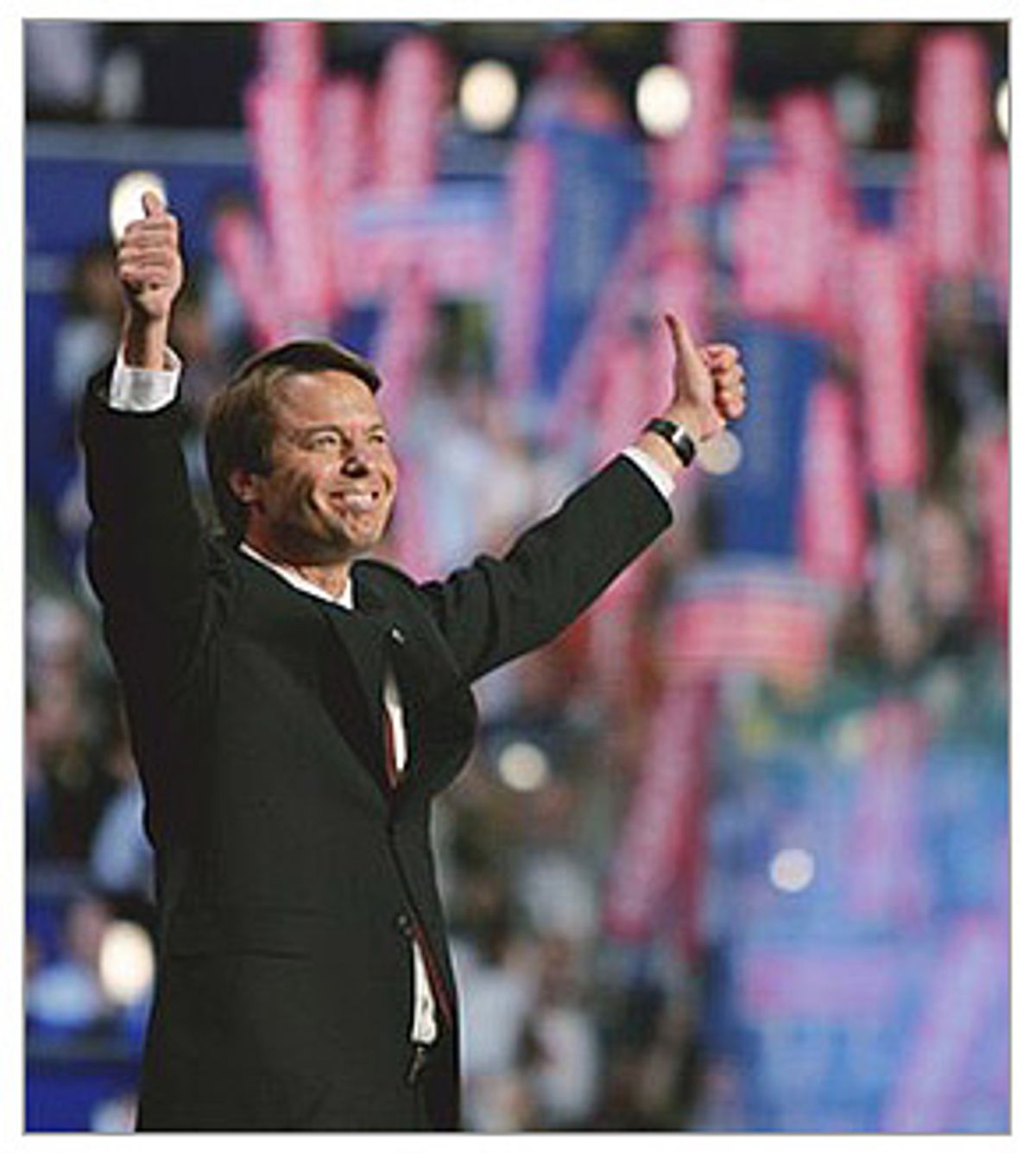 By the time John Edwards stepped onto the stage at the Democratic Convention Wednesday night, the bar for his prime-time performance had been set almost impossibly high. Some of that was his doing; some of it was Barack Obama's. Edwards built an entire presidential campaign on the strength of his "Two Americas" stump speech, and Tuesday night Obama showed the delegates -- and the world -- just how good a political speech could be. As Edwards stepped to the microphone, the packed convention floor surged forward in a sweaty mosh pit of high expectations.

Edwards almost met them. He recounted the heroism of John Kerry, replayed the highlights of "Two Americas," and rebuffed Republican arguments that a Kerry-Edwards White House would be soft on defense. Edwards' speech was all things to all people, but in the end it wasn't quite all that.

"Two Americas" didn't play as well in a huge basketball arena as it did in small towns in South Carolina and Iowa -- perhaps because almost everyone in the arena had heard the speech before. Smiling John's tough-guy talk on terrorism seemed forced, and his "son of a millworker" story seemed somehow less compelling in the shadow of Obama's star turn the night before.

Still, even if John Edwards is no Barack Obama, he's no Dick Cheney either.

Deep in the speech, Edwards had delegates crying -- crying -- over a made-up story about a young woman sitting at home, worrying about making ends meet while her husband serves in Iraq. "She thinks she's alone," Edwards said. "But tonight, in this hall, you know what? She's got a lot of friends." Edwards then led the crowd in chanting "Hope is on the way."

Edwards and his wife, Elizabeth, put an undeniably appealing face on a convention that veered Wednesday from a few off-the-script expressions of anger -- Rep. Charlie Rangel told delegates he was "mad as hell" about the actions of the Bush administration, and the Rev. Al Sharpton told the president that black votes "are not for sale" -- to a drumbeat on national security so martial that Democratic delegates could actually be heard chanting "U-S-A! U-S-A!"

Edwards focused instead on what he felt America once was and can be again.

"Together, we will ensure that the image of America -- the image all of us love  America, this great shining light, this beacon of freedom, democracy and human rights that the world looks up to -- that that beacon is always lit."

It sounds Reaganesque, and it is. And that's exactly why Karl Rove and his colleagues in the Bush-Cheney campaign have such a hard time dealing with John Edwards. Out of the box, the Republicans -- aided by media allies like Tucker Carlson -- laid into Edwards as a personal injury trial lawyer who's made millions off the suffering of others. The attack seems to have little traction with voters. While trial lawyers may be the great Satan for Bush's big business supporters, 69 percent of registered voters questioned in an NBC News poll said that Edwards' trial-lawyer past wouldn't influence their vote -- 14 percent said it would make them more likely to vote for him.

The Republicans can't win a popularity contest with Edwards either, at least not when it comes to a head-to-head match-up with Dick Cheney. As he showed Wednesday night, Edwards is an attractive and appealing candidate, one who can reach out to voters -- poor voters, voters in rural areas -- who may have a hard time believing that George Bush or even John Kerry really understands them.

"You know what I'm saying," Edwards said in the part of his speech directed not at the delegates in the convention hall but at less privileged voters watching on television back home. "You don't need me to explain it to you, you know -- you can't save any money, can you? Takes every dime make just to pay your bills, and you know what happens if something goes wrong -- a child gets sick, somebody gets laid off, or there's a financial problem, you go right off the cliff.

"And what's the first thing to go? Your dreams. It doesn't have to be that way."

Cheney can't compete. He treats campaigning as a chore, and he's not particularly good at it. When he's not warning that the "enemy" is lurking everywhere, he's cackling and smirking like George Costanza's evil twin. Cheney is no help at all with minorities or swing voters; the White House sends him to speak to conservative groups and military audiences. On Tuesday, the vice president was dispatched to California's Camp Pendleton, where, flanked by two 155mm howitzers and 2,500 camouflaged Marines, he defended the administration's Iraq policy and claimed that "the perception of weakness" -- not aggressive U.S. foreign policy -- causes terrorist attacks.

But then reality intruded: A suicide bomb tore through the Iraqi town of Baquba Wednesday, killing 68. Even before Wednesday's attack -- the deadliest since the handover of sovereignty in June -- Kerry and Bush had been locked in a weeklong duel over defense and national security. On Monday, the Kerry campaign orchestrated the Democrats' first-ever Veterans Caucus, an emotional event in which retired Gen. Wes Clark and former Sen. Max Cleland vouched for Kerry's defense bona fides.

On Tuesday, Kerry called for a one-and-a-half year extension of the 9/11 commission to give it time to ensure that its recommendations are implemented; Bush emerged from his Crawford ranch to say that he, too, was reviewing the recommendations and might take action soon.

Wednesday morning, Kerry's elaborate Boston homecoming was designed to reinforce his identity as a hero from Vietnam. He flew into Boston's Logan International Airport, then boarded a boat for a ride across Boston Harbor -- a ride he took with some of the same men who served with him on a swift boat in the Mekong Delta. Kerry draped a life jacket over Jim Rassmann, the Green Beret he saved from drowning during the war. As CNN aired Kerry's arrival, a dozen generals and admirals -- including two retired chairmen of the Joint Chiefs of Staff -- endorsed the Democratic nominee in what the campaign called an "unprecedented display of support from the military establishment."

That afternoon, Wes Clark and Gen. Merrill McPeak, a former Air Force chief of staff, briefed reporters on Kerry's national security plan. Across town at the Take Back America forum, Ambassador Joseph Wilson cited the Baquba attack as proof that the situation in Iraq is deteriorating. "And the problem is, we own the situation in Iraq," Wilson said. "Unless we succeed we will own that failure forever." Former Sen. Gary Hart, who has emerged as a senior statesman on security issues, waved away Republican accusations of Democrat weakness as nothing but politics.

And Wednesday night, the Kerry campaign played a video montage of retired military leaders who have endorsed the ticket. Retired Gen. John Shalikashvili, who later spoke to a sea of flag-waving delegates, said that, under Bush, "We are now producing terrorists faster than we're killing them."

If it seemed like overkill, it was a way to neutralize the only area in which Cheney has an advantage over his Democratic rival. Edwards noted that he has served on the Senate Intelligence Committee, but his defense resume can't match Cheney's, at least on paper. When Edwards tried to talk tough on terrorists -- "You cannot run, you cannot hide, we will destroy you" -- it came off just as forced as it does when Bush talks about smokin' 'em out of their holes.

For most of the speech, however, Edwards stuck to what he does best, even if what he does best is what everyone in America has already heard from him before. "I have heard some discussions and debates about where and in front of what audiences we should talk about race, equality and civil rights," Edwards said in a line taken straight from his primary stump speech. "I have an answer to that question -- everywhere.

Georgia Rep. John Lewis, the civil rights leader who marched on Washington with Martin Luther King Jr., said that Edwards has the potential to match Bill Clinton's appeal to African-American voters. "I'll tell you one thing," Lewis said Wednesday evening, "African-American voters in the South like candidates who can feel, who can touch, who are not afraid to come to a church, pick up the hymnbook and sing the songs. That's what made Bill Clinton so effective with African-American voters. In a real sense, he became one of us. I think John Edwards has the potential to become one of us."

Moreover, Lewis said, Edwards can teach Kerry how to reach out and relate better to African-Americans. While Lewis said it would be "almost impossible" for Bush to fare better among black voters than he did in 2000 -- when he got just 8 percent of the black vote -- Democrats need African-Americans to turn out in large numbers. Edwards will help with that, Lewis said. "He's a man of hope, a man with a great deal of vigor, and he's going to help John Kerry bring us back to being a nation at peace with itself."

Edwards could also help Kerry win in Middle-American swing states like Ohio and Missouri. "Edwards went down to Springfield this past year -- a strongly Republican area -- and drew huge crowds," said former Missouri Sen. Jean Carnahan, the wife of former Missouri Gov. Mel Carnahan, who beat John Ashcroft out of a U.S. Senate seat even though he was dead at the time. Remarking that his pull in Springfield was "very telling," Carnahan predicted that Edwards will do "great things for our ticket."