Palestinian boys craft homemade hand grenades in HBO's "Death in Gaza," and hapless victims of Fox's latest trashy joy ride meet their new mommies. Plus: Who's weirder, the Amish or the Angelenos? 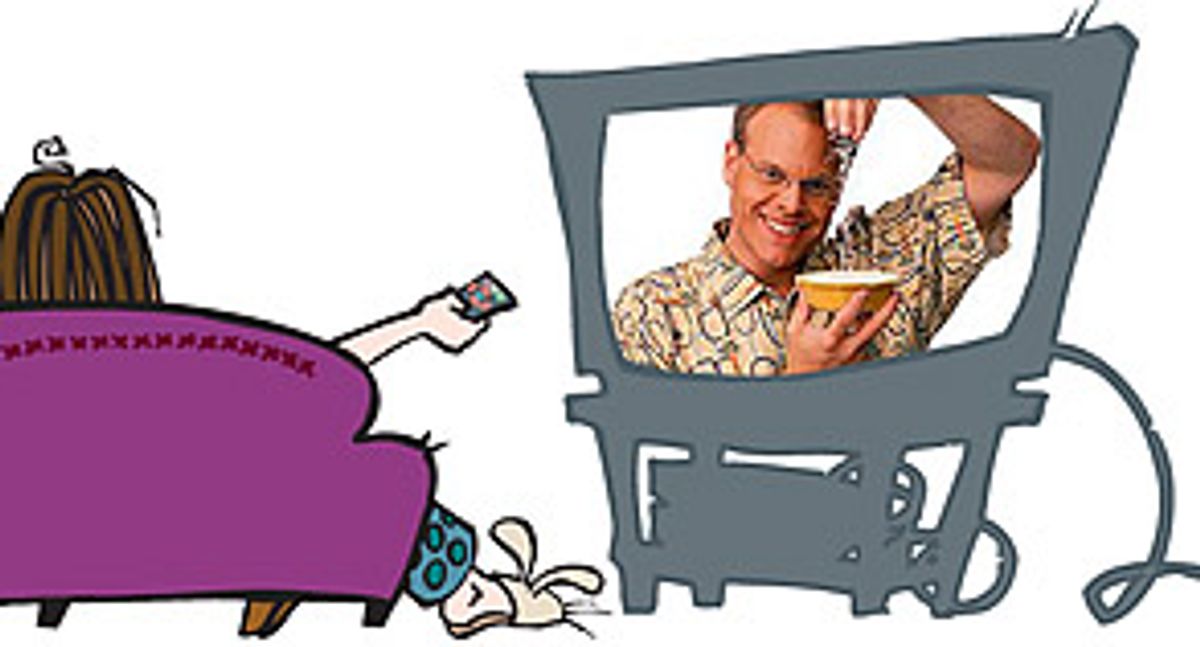 Hot, hot, hot!
"Breaking news in the Southland, right now, this fast-moving brush fire! Over 150 acres in just two hours! It is scorching and we will continue to keep an eye on it, as you continue watching us! This is CBS 2 News at 4!"

Have you ever wondered why you're such an uncaring, heartless human being? Wonder no more. Your local news station is to blame. Recent studies indicate that, when humans with bottle tans bark manically about the latest car chase or freakish animal-related mishap or rapidly spreading fire, four out of five subjects get a strange tingling in their hands, accompanied by a feeling of "unexplained cheer" and "curiosity" as well as a feeling that "big things are happening in the world, even as my pathetic life goes nowhere."*

These feelings lead to an inability to change the channel, even as the mannerisms of the orange humans on-screen offend the senses, even as their chirpy reports of tragedy feel oddly out of step with humanity. "Several homes threatened!" they breathe, excitedly, knowing that their enthusiasm for burning homes is sure to be contagious.

Have you caught the spirit yet? Of course you have, because you are an uncaring, heartless human being.

Dead man filming
Never fear, you comfortably numb shell of a human, you. Your ticket to painfully real emotion is here: HBO's "Death in Gaza" (Thursday, Aug. 12, at 9:30 p.m.), which could make even the oldest, most wizened sea donkey cry big, salty tears over the nightmare of life in Rafah, a crumbling town on the southern tip of the Gaza strip. The Palestinian kids who live there have seen more death in their short lives than anyone should have to see in a lifetime. Naturally, this distorts their dreams and visions of the future ever so slightly.

"Martyrdom's not just for grown-ups. It's for old and young alike," says Mohammed, age 12, with an earnest, wide-eyed look that makes his words all the more haunting.

In Rafah, it's common practice for kids to write letters for their families to read in case they're killed. "I intend to continue jihad until I'm martyred," Abdul, age 11, writes in his letter.

Later, two girls sit and talk about the many people in their family who've been killed. With sadness in her eyes, the younger girl, who's maybe 9 or 10, confesses, "These days if anyone says, 'I hope you die,' I say, 'I wish.'"

Even more than the comments of the young children, the images of the film will stay with you forever. Beautifully directed and filmed by James Miller and reported and edited by Saira Shah, the long, patient shots of Israeli tanks and bulldozers growling along the zone that separates the dilapidated buildings of Rafah from the sea are like something out of the Pink Floyd movie "The Wall." These strange military machines fade from view and reappear like lonely animals, wandering aimlessly through an apocalyptic landscape where peace seems utterly out of reach.

Miller and Shah planned to shoot footage of Israeli kids, too, but never had the chance. On May 2, 2003, the two spent the night filming tanks threatening the structures in one of the children's neighborhoods in Rafah. When it got late and the action subsided, the crew waved a white flag to signal to nearby tanks that they were going home. An Israeli tank responded by opening fire, shooting Miller in the neck. A nearby cameraman caught the image of his white flag falling to the ground. No one was charged in his death.

If you escape this documentary without shedding a tear, you're either a cold-blooded demon or you're an anchor for the local news.

Trading sadomasochistic reality concepts
Or you're an executive at Fox. In Table Talk, they affectionately refer to these people as asshats, and if you tune in for "Trading Spouses: Meet Your New Mommy" (Tuesdays at 8 p.m. on Fox) you'll see why.

First of all, "Meet Your New Mommy"? Who dreamt up that creepy name, and how many disturbed individuals signed off on it?

Second, the concept for the show was allegedly stolen from ABC, by this asshat from Fox who looks like Weird Al Yankovic. Personally, I feel that focusing on who's stealing whose creepy reality TV ideas is sort of like accusing Jessica Simpson of knocking off one of Britney Spears' songs. Reality TV concepts are as rare and precious as toenail clippings, and the idea that anyone could consider their big idea an act of brilliance that should be protected by copyright law is a testament to the self-congratulatory hot house in which TV's precious flowers exist.

But this Mike Darnell guy does seem to have about as many values and ideals as Aqualung, so I'm not surprised that he's been eyeing little TV concepts with bad intent. I'm also not surprised that the results are this underwhelming:

Kaitlin: No one in our family has ever ordered a salad with a pizza.

Erik: Why'd you get a salad?

Samantha (imposter mom): [Laughs.] Why not?

Erik: (to camera) I think that she ordered a salad because maybe in California all the girls there are thin or something.

Kaitlin: Yeah, but I don't get salads.

Samantha: Why? I eat a lot of salad.

Kaitlin and Erik stare at her, dumbfounded.

Isn't it weird how some families eat vegetables, and others don't? These groundbreaking moments of truth are the very heart and soul of "Trading Spouses," which, as you might have guessed by now, focuses on two families who trade moms to see how ugly (and therefore, worthy of being nationally televised) things can get.

Just to ensure ugliness to spare, the producers send a fit, wealthy blonde, Samantha, who tells us she firmly believes in the powers of positive thinking, to live with a family of overweight complainers. The overweight complainer mom, Lisa, in turn finds Samantha's family rude, pampered and totally out of touch with each other's lives.

Adding insult to injury, the imposter moms are forced to decide how a $50,000 prize will be spent by their guest family. Samantha quickly determines that what The Complainers really need is to put a down payment on a new car, even though it's clear they can't afford to make a costly car payment each month. And next week, Lisa will likely decide that her rude host family needs to spend more quality time together -- screaming at each other over a pizza, perhaps?

In short, this is a show about class. "Trading Income Brackets: Meet Your New Lower-Middle-Class Family" is a little bit catchier, don't you think?

Amish you
While naysayers use shows like "Trading Spouses" to justify their blanket hatred of reality TV, there's obviously a huge divide between good and bad reality shows. But when plans were announced to do a reality show about the Amish, lawmakers, who are typically unfamiliar with anything that's not controversial, got their panties in a bunch over how obviously exploitative this show, which they'd never seen, would be.

As it turns out, "Amish in the City" (Wednesdays at 8 p.m. on UPN) does for the Amish what Canadian bacon did for Canadians. As irresistible as an Egg McMuffin fresh out of the microwave, the show highlights young people who are taking part in rumspringa, a period of freedom in Amish life where kids can go out into the non-Amish world and decide if they'd like to stay there or return to the Amish life with their families. While most Amish kids don't wander very far from the area where they grew up during rumspringa, producer Jon Kroll thought it would be fascinating to give some Amish kids the opportunity to see a lot more of the world during this time.

So "Amish in the City" offers the Amish kids an opportunity to see the ocean, go to an Arrested Development concert, bet on horses, etc., while offering the kids at home a chance to see that Amish kids are just like you and me.

Unfortunately, Amish kids are not just like you and me. In fact, they bear a striking resemblance to aliens. Not only do they have these crazy accents that lie somewhere between Marvin the Martian and Mork from Ork, but they navigate the world stiffly, like nervous, naive outsiders. In other words, they behave like human beings who've grown up in tightly knit, small communities without access to modern technology.

What's really fascinating is that, strange as they are, the Amish kids make the L.A. kids look like something straight out of a traveling freak show. Like Ariel, the vegan who tries to explain why she thinks cows are from outer space. (No, she's not kidding.)

Needless to say, this is a surprisingly entertaining show. Not only are the conflicts between the kids more illuminating than some of the better seasons of "The Real World," but watching Amish girl Ruth cry as she walked on the beach and gazed out at the ocean for the first time was worth the price of admission alone. Much as you want these Amish kids to have the freedom to experience everything that the modern world has to offer, their sensitive natures, their kindness and their consideration toward each other casts more of a shadow on the carelessness and disconnection of urban life than it does on Amish culture.

Next week: Fun activities for schizophrenics! Plus: Andy Dick plays big swinging dick on "The Assistant"!