No matter how hard revisionists try to rewrite the history of the 37th president 30 years after Watergate, the shame of that scandal is what people will remember most of all.

By Stanley I. Kutler 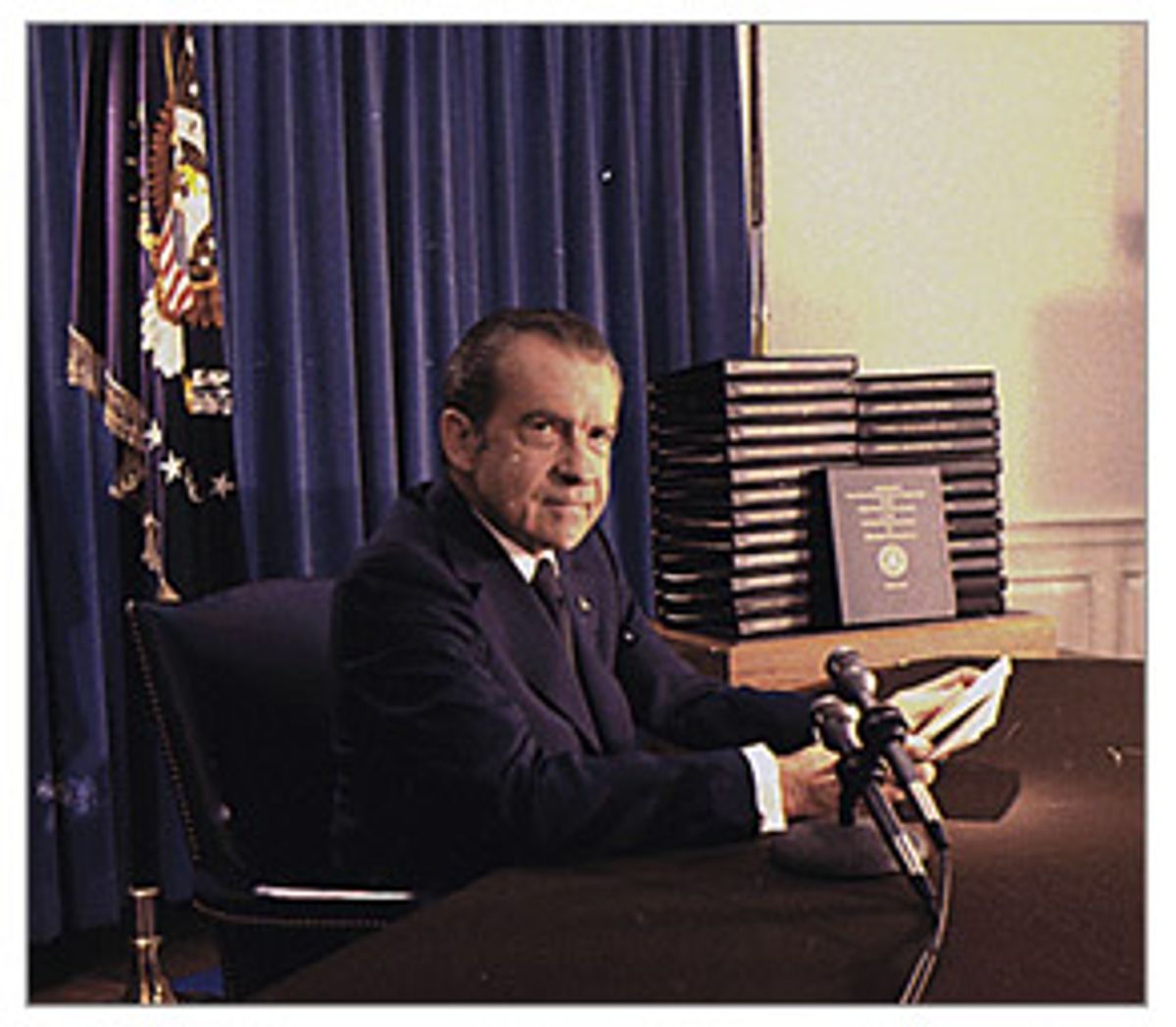 Richard Nixon's enduring legacy is that he was the first, and thus far only, U.S. president to resign. Nixon's motive for resignation is shrouded in typical ambiguity: Was it altruism, or desperation, or a desire to save himself from further humiliation, or was he merely anxious to preserve his retirement benefits?

Nixon and his presidency continue to command our attention. He stood at center stage in the nation's political life for nearly five decades. Nixon, with Presidents Truman, Eisenhower, Kennedy, Johnson, Ford, Carter, Reagan and the elder Bush, contributed to the containment policies that resulted in the demise of the Soviet Union and communism. Indeed, he even went to China; but the Chinese knew his history and understood that President Nixon came to China because he did not have Richard Nixon on the outside criticizing. Some historians praise his liberalism and the importance of his domestic program. But do Americans really remember his ill-fated (and self-scuttled) Family Assistance Plan? His support for environmental legislation and his contempt for environmentalists? His bureaucracy's forceful acceleration of Southern school desegregation and his baleful "Southern strategy"? His apologists contend that Nixon's troubles can be explained away -- even justified -- by his role as a "war president," comparable to that of Lincoln and FDR. Covering up a break-in of the opposition's headquarters? No, Watergate in all of its meaning is the spot that will not out for Nixon.

Determined admirers have mounted a formidable campaign to redeem Nixon's reputation. Revisionism about historical figures is as inevitable as death and taxes. Undoubtedly, Nixon's policy efforts -- some important, some problematic and some dubious -- will fade into the mists of history. Fading, too, are the memories of his criminal behavior, including his fraudulent tax returns, his failure to pay his taxes, his authorization of payments to the Watergate burglars and the various strands to the official impeachment count of "abuse of power."

History is written and taught as an ever-evolving condensation and reduction of the past to leave us the truly important and significant. American history textbooks, as they grow more distant from recent political events, basically will remember Nixon as the president who resigned because of a paralyzing scandal that impaired his ability to govern. They inevitably will have to ask, "Why?"

The Framers of the Constitution provided for the event of a presidential resignation, but since they deliberately chose a nonparliamentary form of government, their use of the term apparently related to physical or mental disability. The outcome of Nixon's presidency was beyond anticipation or prediction. We have no example of a president who seriously contemplated resignation. Woodrow Wilson's mental and physical state in the 1919 presidential race prompted that consideration, but largely by his political foes.

For months, Nixon privately mused about the prospect of resignation. Such talk alternately derived from self-pity and a perverse form of bravado. Publicly, he was adamant that he would not resign, notably in his State of the Union address in January 1974 and in a lengthy interview with conservative columnist James Kilpatrick in May. He maintained that resignation or impeachment would have the dramatic effect of destroying the stability so vital for American leadership in the world. "I will not be a party under any circumstances to any action which would set that kind of precedent."

At the end of July 1974, the House Judiciary Committee approved three impeachment resolutions, with seven Republicans joining 21 Democrats. It was an extraordinary moment. Conservative Republican M. Caldwell Butler of Virginia was profoundly disappointed in the president, but he rejected any notion of resignation. He did not want to establish a precedent "for harassment out of office, which is what would be claimed." He preferred the constitutional process of impeachment, noting that "it's a pretty good system."

Circumstances changed dramatically in 10 days with the revelation of the "smoking gun" tape in which Nixon and H.R. Haldeman, his chief aide, plotted to use the CIA to thwart the FBI investigation in the days following the Watergate break-in. Nixon loyalists got their wish for "specificity" on the charges; it was the end. Kilpatrick summed up the swelling mood. Had Nixon told the truth from the outset, he wrote, Watergate would have been a nine-day wonder, Nixon would have been reelected, and no more would have been heard of the affair. Now, Kilpatrick sadly concluded, "My President is a liar. I wish he were a crook instead."

Nixon almost certainly would have been impeached, and by an overwhelming, bipartisan vote. The outcome in the Senate was more unpredictable, but his support had eroded. The ever-loyal Vice President Ford distanced himself, having concluded "that the public interest is no longer served by repetition of my previously expressed belief that on the basis of all the evidence known to me and to the American people, the President is not guilty of an impeachable offense." Meaning that he was. Barry Goldwater joined Republican congressional leaders in a visit to the president on Aug. 7 and told him that he possibly had 10 votes in the Senate. Nixon knew how to read political tea leaves: Republicans and Southern Democrats had abandoned him; the course was clear.

Nixon's resignation was unique. He prided himself on his "firsts," but his resignation on Aug. 9, 1974, is his tar baby, a perpetual reminder and benchmark of who he was. Like Shakespeare's Richard II, Nixon could only lament:

"O that I were as great
As is my grief, or lesser than my name!
Or that I could forget what I have been,
Or not remember what I must be now!"

MORE FROM Stanley I. Kutler