President Bush says "we have turned the corner" -- but with him at the helm, the American economy is headed straight to Davy Jones' locker. 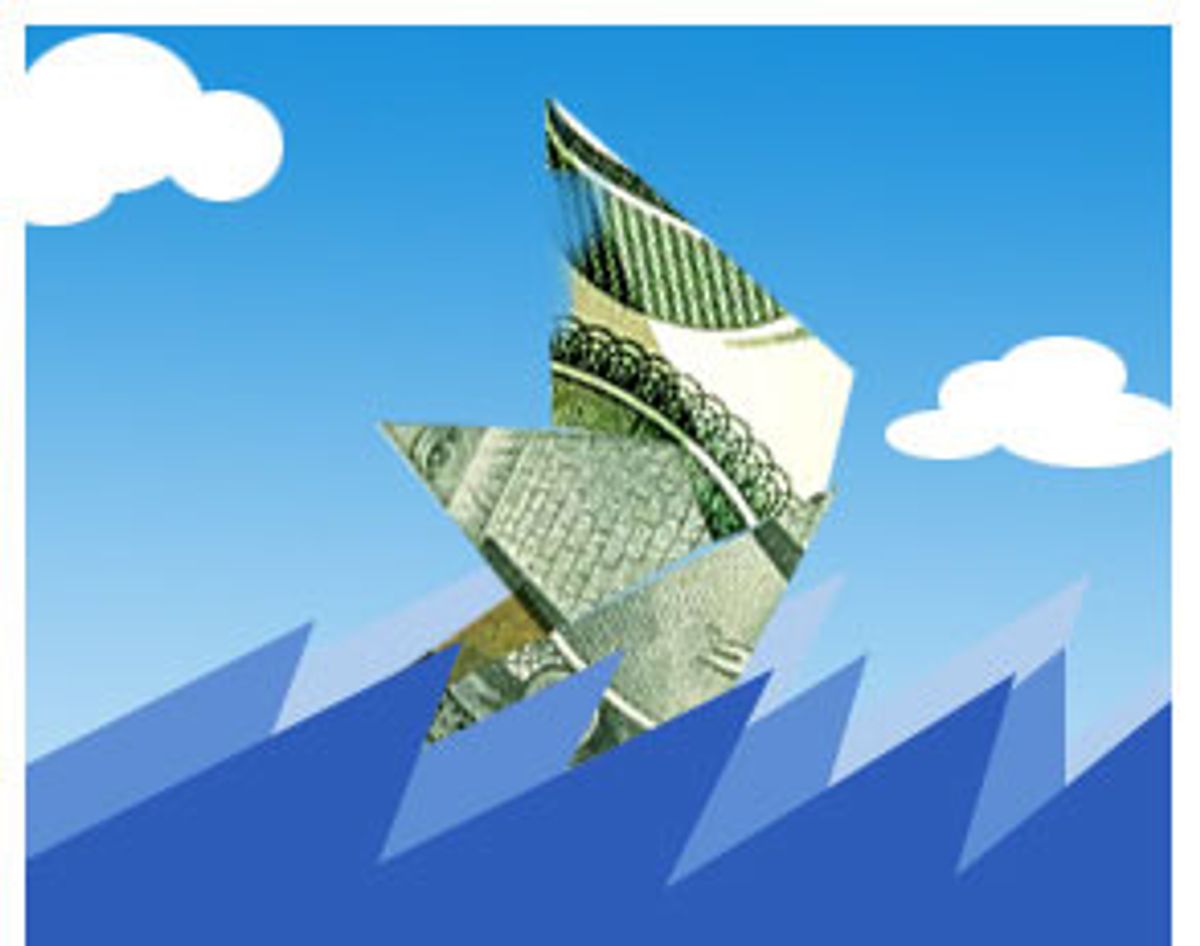 Aren't you glad you get your economic news from Salon? You expected this. You were warned. Unlike almost everyone else, you were not "surprised," "shocked" or "stunned" by July's jobless jobs report. Back in April, you knew that the jobs surge wouldn't last four years. Four months, you read then, might be believable.

For the good ship Recovery, July had a sinking feeling. Early in the month, we learned that second-quarter growth had already fallen sharply -- to just 3 percent compared with 4.5 percent in the first quarter and about 8 percent in the third quarter of 2003. Then personal income growth fell to 0.2 percent; personal consumption expenditures also fell, by 0.7 percent. Housing starts were off 8.2 percent. New-home sales fell 0.8 percent. Industrial production fell 0.3 percent. And now we have the July jobs report, showing just 32,000 new jobs and a cut of 34,000 in the estimates previously released for June.

Except for July's jobs, all of this had already happened before Alan Greenspan started raising interest rates at the end of June. Greenspan and his colleagues acted from fear of an overheating expansion and accelerating inflation -- or so they said. Now Greenspan says we're in a "soft patch." He doesn't explain why he didn't see it coming. He doesn't say why he thinks it will soon end. It makes you wonder why we need him. Understandably, the stock market is wondering too. Stocks fell by over 300 points in July. They fell again last week, when the awful jobs news hit home.

Meanwhile inflation, which the Federal Reserve claims to be fighting, fell by half -- from 0.6 to 0.3 percent monthly in the Consumer Price Index -- before rates rose. Producer prices actually fell in June. Import and export prices were down 0.2 and 0.6 percent, respectively. And the employment cost index -- the much-feared barometer of labor power -- was decelerating, from 1.1 percent to 0.9 percent.

Business economists reacted to the jobs report as they always do. First, they said that no one expected it. Within their community this was largely true: Apart from a handful of honorable people, no one paid by Wall Street ever expects bad news. (And evidently they don't read Salon.) Second, they blamed oil prices, which could be a transitory factor; then again, maybe it isn't. Finally, some said they found the slowdown reassuring. Perhaps it will lead to a more sustainable path for future economic growth. Ah, yes, that's remotely possible. On the other hand, perhaps it will lead to a full-fledged slump. The business economists do not know.

"We have turned the corner." So President Bush continues to say. But in what direction? The answer rests on Stein's law: "When a trend cannot continue it will stop." (Herb Stein was chairman of the Council of Economic Advisors under President Nixon.) The fundamental trend has been the debt-financed expansion of consumer spending, propelled by the housing bubble, and supported by tax refunds, which are now finished.

Have you seen what happened to mortgage rates since the Fed started raising rates? They first rose and then fell -- from 6.25 percent to as low as 5.5 percent for a 30-year fixed rate in the past few days. That means there aren't many takers anymore. The household debt engine kept the economy moving for four years after the Internet bust, but it seems it's now breaking down. It was, in fact, perfectly predictable that it would. I, for one, predicted it. We just didn't know when.

If he wins, what will Bush do to spur growth and restore jobs? Clearly, he will do nothing. Bush by that point will have no interest in stronger economic growth. Indeed, the huge deficits sure to accompany deep stagnation will suit the Republican agenda perfectly. Bush will defend his past tax cuts by pointing out that no one raises taxes in a recession. Instead he will demand spending cuts and the privatization of Social Security, citing the budget deficits that he himself deliberately created. Greenspan, taking time from monetary mismanagement to launch trial balloons for Bush's future fiscal policy, is already making this completely illogical case. It's true enough that one shouldn't raise taxes in a slump. But one definitely should not cut spending either, nor strike at the last shreds of security for working people.

Mercifully, the sagging economy does mean that John Kerry is ever more likely to become president and that we therefore won't have to face Bush's second term. But what if the soft patch just keeps getting softer? You, dear reader, have no credible reason to suppose that it won't. And you've got one credible forecaster who says that it will.

That will present President-elect Kerry with a new challenge.

So far, Kerry has followed the common assumption that the recovery will continue. Given the herd mentality of the business economists, Kerry could not really have done otherwise, even if his advisors had harbored suspicions about the recovery's strength.

But this assumption means that Kerry's economic program is built around the idea that his main job as president will be to solve important social problems like healthcare and energy, while restoring fiscal responsibility over time as the economy grows. Job creation is an important Kerry theme. But it is fleshed out with relatively modest measures like tax sanctions against outsourcing and incentives for the creation of new manufacturing jobs. These measures are a supplement to the expected economic expansion, but they will not make the expansion happen on their own.

If the good ship Recovery continues to founder, the premise will have to be rethought. To save a sinking ship demands actions quite different from those one would take merely to sail into port.

The details will have to come later, but the question still bears on November's choice. Do you want a skipper who has already given orders to stick to a course set three years ago despite its proven failure? Or would it be better to have a new captain, to judge the situation with fresh eyes and an open mind? One with a record, over the years, of doing exactly that?

What, do you think, would the Navy say?