Two couples, one illicit affair, and all the guilt and recrimination that are sure to follow. 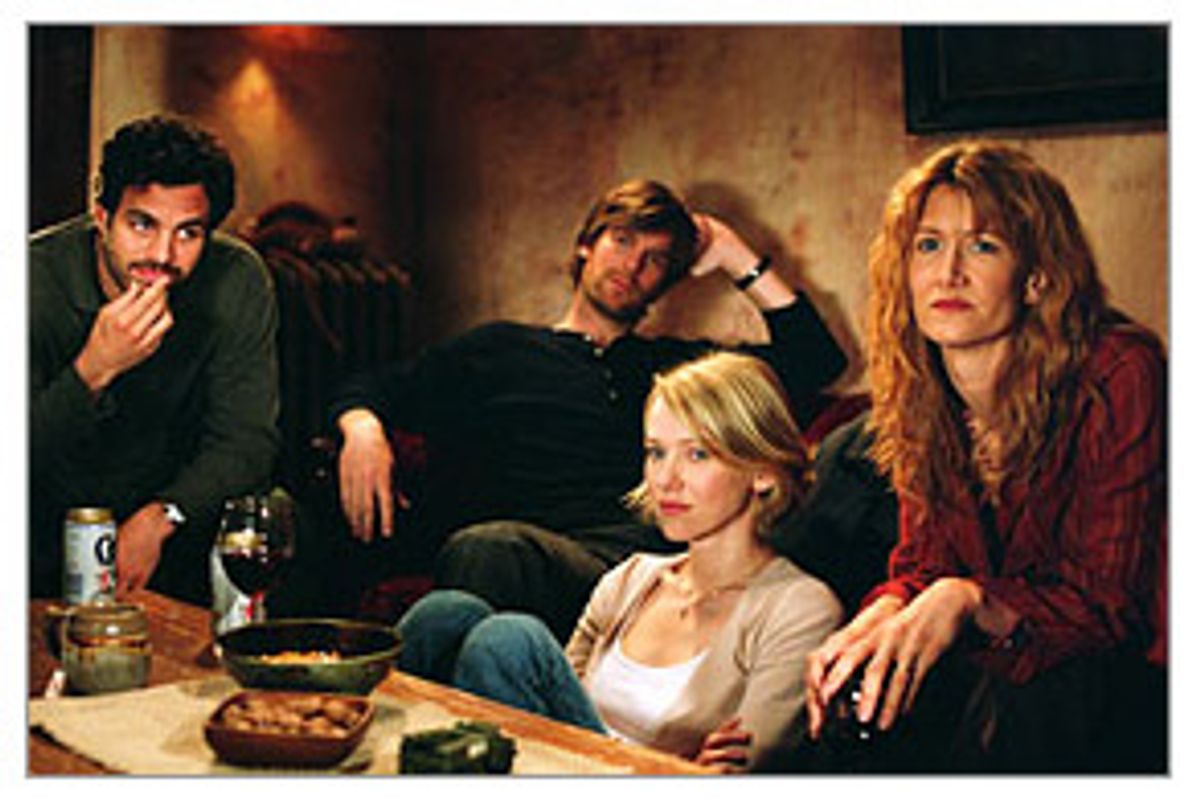 As long as human beings keep coupling, there will be adultery, and the pain and confusion it causes is one of the universal themes of literature. The territory is certainly rich enough. Why, then, do filmmakers so often seem to work extra hard to make adultery boring?

John Curran's "We Don't Live Here Anymore," adapted by Larry Gross from a pair of Andre Dubus short stories, tells the story of two small-town academics, floundering novelist and poet Hank Evans (Peter Krause, of "Six Feet Under") and a less glamorous but potentially more thoughtful English instructor, Jack Linden (Mark Ruffalo), and their respective stay-at-home wives, Edith (Naomi Watts) and Terry (Laura Dern). The two couples are close: Jack and Hank go out running together, after which they huddle at the local watering hole and talk emotionally disconnected man-talk. Edith and Terry are supposedly best friends, although we barely see them interacting until the movie's third act. The foursome get together on weekend evenings, after their kids have all been tucked into bed, to watch old movies on cable. Terry suspects that "something" is going on between Jack and Edith, and she's right: They've been having illicit sex in uncomfortable places (against trees, in shadowy corners) for a while now, nosing around each other in search of everything that's lacking in their spouses, as cheating partners throughout the ages have done.

The cheating in "We Don't Live Here Anymore," and the suffering, guilt and recrimination that churn around it, feel more iconic than emotional -- the movie may be very much about feelings, but it's made with a drab, juiceless, tasteful efficiency that distances us from the characters instead of drawing us closer to them. And though it's set in the present, the movie has the stiff, respectful feel of a relic, as if it were more part of a tradition than a stand-alone work. Yearning hovers over the movie like a potent rain cloud, but we're not talking about yearning for emotional connection, for understanding, or even for raw sex. "We Don't Live Here Anymore" desperately wants to sit at the table with the big boys, people like John Updike and John Cheever, who came from an era when sophisticated, thinking couples would sit around their porches on a summer's evening, swirling the ice in their bourbon glasses and not daring to think about all the ways in which their partners had disappointed them. Oh, the pain of being complicated! Simple people will never be able to understand.

The air in "We Don't Live Here Anymore" is so dry, you wonder how any of the characters get any oxygen at all. Curran (his debut feature was the 1998 "Praise") does take care to make each character distinct and memorable. But it's impossible to like any of them, or even to like just small bits of them: Krause's Hank leers at the cutie coeds who flock to his writing classes, condescending to them by complimenting their work as obliquely as possible. His one sympathetic quality is that he does seem to really need his wife: Watts' Edith, attuned to Hank's incessant infidelities, pretends not to care -- she's the crisp, WASP version of a teenage gum-snapper -- but is clearly pained. Still, she's too remote to really let us in: She keeps proclaiming to Jack, during their trysts, how much she loves his wife, Terry, but she may as well be talking about the checkout girl at the local supermarket. We have no sense of the texture of their friendship.

Ruffalo's Jack is a lost puppy masquerading as a grown-up: We see that he's spent much time riffling through the pages of the "My wife doesn't understand me" handbook, but we don't see that there's all that much to understand in the first place. And Dern's Terry, the movie's most sympathetic character by design, is also the one it treats most cruelly: Dern has a big speech in which she screams some well-earned invective at her husband, and the camera leans in to capture the rage and pain evidenced by her twisted mouth. The other characters are always mentioning how beautiful Terry is. Yet Watts -- herself a stunner -- is always shot to look dewy and golden, while Terry is constantly made to look haggard and harried. Of course, that's the point (Terry's life is harder, and quite a bit more complicated, than Edith's). But why not find a way to capture some of the beauty of Dern's strong features, instead of using her as the universal symbol of the suffering wife?

Dern and Watts both work hard at their performances, and you can tell Curran is on their side, urging them to give their best. But the material repeatedly lets them down: It's hard to care about any of these characters because you have no inkling of what attracted the respective couples to each other in the first place -- and just an inkling would help. Krause shambles through his performance, but it's hard to know what any actor would do with this stretched-out T-shirt of a character. And Ruffalo, always an incredibly likable actor and sometimes an impressive one, doesn't give us much to hang on to here: We're supposed to feel sorry for him and believe he's something of a heel. But he's too shapeless to evoke either our anger or our pity. "We Don't Live Here Anymore" is an earnest study in marital ennui, disaffectedness, frustration and rage. Like most earnest studies, it pretends to deal with messy emotions but never even scratches the heart of them. Instead of blood, all we taste is watery bourbon.