Where computers go to die

California's new electronics recycling program will treat monitors and flat screens like bottles and cans. But is that the best way to keep high-tech toxins out of the local landfill? 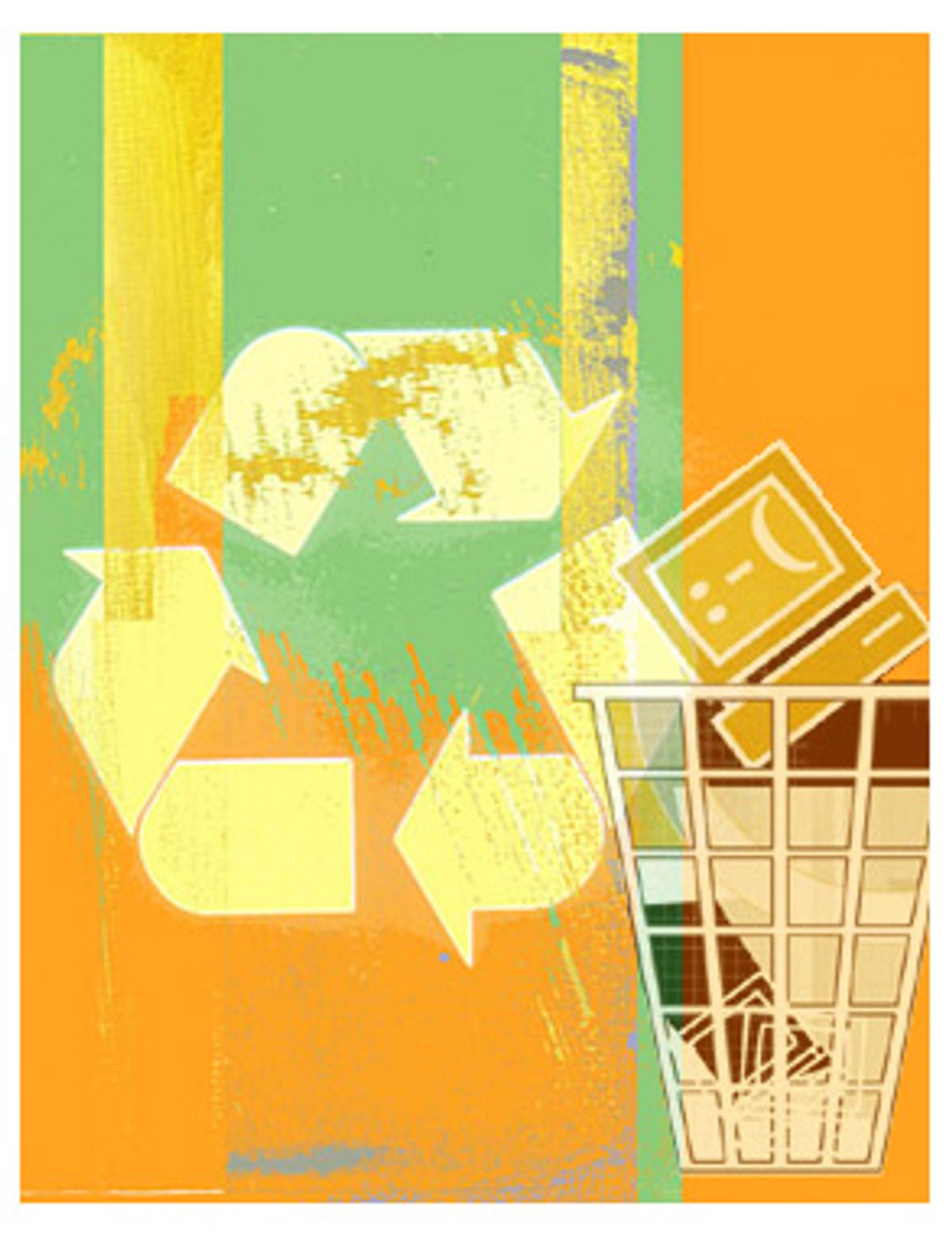 This fall, Californians will start paying $6 to $10 more for every monitor, flat panel, laptop and TV sold in the state -- the result of a recycling law that will take effect Nov. 1.

The goal: to encourage citizens to get rid of deceased toxic electronics responsibly, instead of dumping old monitors and other high-tech detritus on the street corner.

Under the new law, the fee will be collected at the cash register -- or the electronic shopping cart -- and the money will be used to compensate collectors and recyclers at the end of the product's life. The electronics legislation is modeled on California's bottle and can recycling programs, which assess a few cents on every Budweiser or Diet Sprite sold.

But activists who've agitated for years to keep toxic electronic products from leaching lead into U.S. landfills or from being foisted on the developing world aren't all that enthusiastic about the California plan.

They question whether the $6 to $10 fee will cover the cost of getting rid of cathode ray tubes, leaded glass, and the lead solder that holds everything together. They worry that the new recycling fund will be speedily exhausted as consumers rush to clear out the backlog of computer junk collecting dust in garages and closets. And they are upset that the law effectively permits manufacturers to pass the cost of recycling on to the consumer, instead of encouraging them to make products easier to recycle or less toxic from the get-go.

The California approach -- which, as is often the case with California initiatives, is likely to be copied by other states -- offers a sharp contrast to the comprehensive computer-recycling approach adopted by the European Union. There, to the satisfaction of recycling activists, computer companies are required by law to take back all hardware and recycle it themselves, an approach that has given those companies a powerful incentive to design their products in such a way as to make recycling cost-efficient and easy.

"If manufacturers [in California] had to contribute, they would take more consideration in the design of the product," says Sheila Davis, a project director for the Silicon Valley Toxics Coalition, one of the groups waging a nationwide Computer Take Back Campaign. "As it turned out, the manufacturers have absolutely no responsibility."

Davis favors a policy along the lines of one that will go into effect in Maine in 2006. Like the E.U., Maine will require computer and TV manufacturers to be responsible for recycling electronics themselves. At present, Maine and California represent the leading edge of high-tech recycling in the United States. But in terms of impact, the influence of California's actions will likely dwarf Maine's -- which is why, with one notable exception, computer hardware manufacturers are almost certainly cheering the Californian law.

Hewlett-Packard is the exception. The company opposed the California law but supported Maine's bill, which much of the rest of the industry, including Apple and IBM, fought hard -- and failed -- to defeat.

"We're not against recycling, but we didn't like the idea of the advanced recycling fee," says David Lear, Hewlett-Packard's director of environmental strategies and sustainability. "Our preferred program really is having a shared-responsibility model. It gives us incentives to do it right, to design our products better. If we don't have any role in recycling, we can't get our materials back. We don't want to put in time up front if we don't really have a way that we can pull it out."

Hewlett-Packard is currently running a free nationwide promotion with Office Depot that invites consumers to bring a myriad of electronics -- regardless of manufacturer -- into stores to have them picked up for recycling. HP's goal is to recycle a billion pounds of hardware by 2007.

In its initial form, the California bill sounded similar to the legislation that Maine enacted in April 2004. In Maine, electronics manufacturers will be required to set up consolidation centers throughout the state, where municipalities can drop off dead TVs and computers, for free, to keep them out of landfills, explains Jon Hinck, a staff attorney for the Natural Resources Council of Maine, an organization that lobbied for the bill's passage.

"It's a closed-loop system that encourages design change. If they [the manufacturers] have to take it back, then they're going to say: OK, we need to make it easy to recycle," says Eleanor Whitmore, a program director for the Texas Campaign for the Environment.

Consumers might well wonder whether manufacturers will simply cover the costs of the Maine plan by raising prices -- the result being no effective difference between the Maine and Californian recycling approaches from the buyer's point of view.

But Hinck says that recycling doesn't have to be a zero-sum game. "We all know that the private entities are going to be better at putting efficiencies into the systems than the public entities. If we have the manufacturers playing in this waste game, then they're going to drive the system to make sure it's efficient."

In other words, the manufacturers will look for ways to lower the costs of recycling early in the design process, which will help to keep overall costs down.

California and Maine have both banned toxic monitors and TV screens from local landfills, explains Kara Reeve, the national coordinator for the Computer Take Back Campaign. But such bans can cause as many problems as they solve. Once prohibited from landfills, where should the old monitors go?

"Right now there's no financial incentive at all for a local government to tell the public that [electronics are] toxic," says Mark Murray, executive director of the nonprofit Californians Against Waste, "because that means that the public will bring them the toxic waste, which has to be managed as toxic waste at the cost of $25 or more a unit. Illegal disposal is free."

"I think that a lot of other states, like New York, Massachusetts and Florida, are kind of sitting on their hands to wait and see" how the California program goes, says Murray. "If it seems to be working, it's going to become the model across the country."

Some critics of the law believe that its enactment will have a positive effect, but their praise is measured. "When California does something -- anything -- it frequently provides some type of motivation for other states to act," says Davis, the Silicon Valley Toxic Coalition project director. "In that way, it's been very positive. However, I think that the end result is not very good. It's very difficult to implement. There's not enough money. It's probably not well planned."

Davis anticipates shortfalls because, as she points out, it currently costs $10 to $30 to recycle a single cathode ray tube. But Murray argues that no one expects the program to get 100 percent participation, a level that would strain the cost structure. "If we only have a 60 percent recycling rate for bottles and cans, it's hard to imagine how we're going to get the recycling [of electronics] up over 60 percent."

On the other hand, Murray notes, the consequences of not seeking full compliance are far more significant when the issue at hand is high-tech electronics. The stray aluminum can that ends up in the landfill is not nearly as dangerous as a decaying PC leaching lead into the soil.

Eventually, "we need to make sure we're getting pretty close to 100 percent," Murray says, noting that California is recycling about 20 percent of its computers and TVs. (The national rate for computers, according to the Computer Take Back Campaign, is closer to 10 percent.)

One big question that's still unanswered is whether consumers will bother to go to the trouble of recycling. Will a Californian remember, years after buying a PowerBook G4, that she's already invested in its having a good final resting place, so she may as well go to the trouble of getting rid of it properly?

"A fee charged at point of sale and then remitted to the state -- is that necessarily going to motivate the customer to recycle at the time they're ready to get rid of the computer? That's sort of an unknown," says Bryant Hilton, a Dell spokesperson.

Hilton points out that often the person who buys a computer is not the one who gets rid of it when it's finally unusable. (Dell took a neutral position on both the Maine and California legislation.)

Since Dell began offering computer recycling to consumers in March 2003, the adoption by customers has been "slow and steady, not at all where we want it to be yet," says Hilton. Business customers have tended to be more interested in paying for recycling -- or refurbishing old systems to be sold off -- since for a company, keeping around dozens of old systems can mean real warehousing costs, while consumers tend to just stick the junker in a closet.

Dell's most successful recycling promotion for consumers so far began just a few weeks ago, when the company began offering free computer recycling, including home pickup and shipping costs, to customers buying a new Dell computer. The customer sticks the old computer in the new computer's box and slaps on an enclosed shipping label.

Maybe the easiest time to get computer users to recycle is to strike at that exact moment when they're wondering where they're going to put the old one.