What the partnership of Gov. and Mrs. McGreevey says about the absurdity of banning gay marriage. 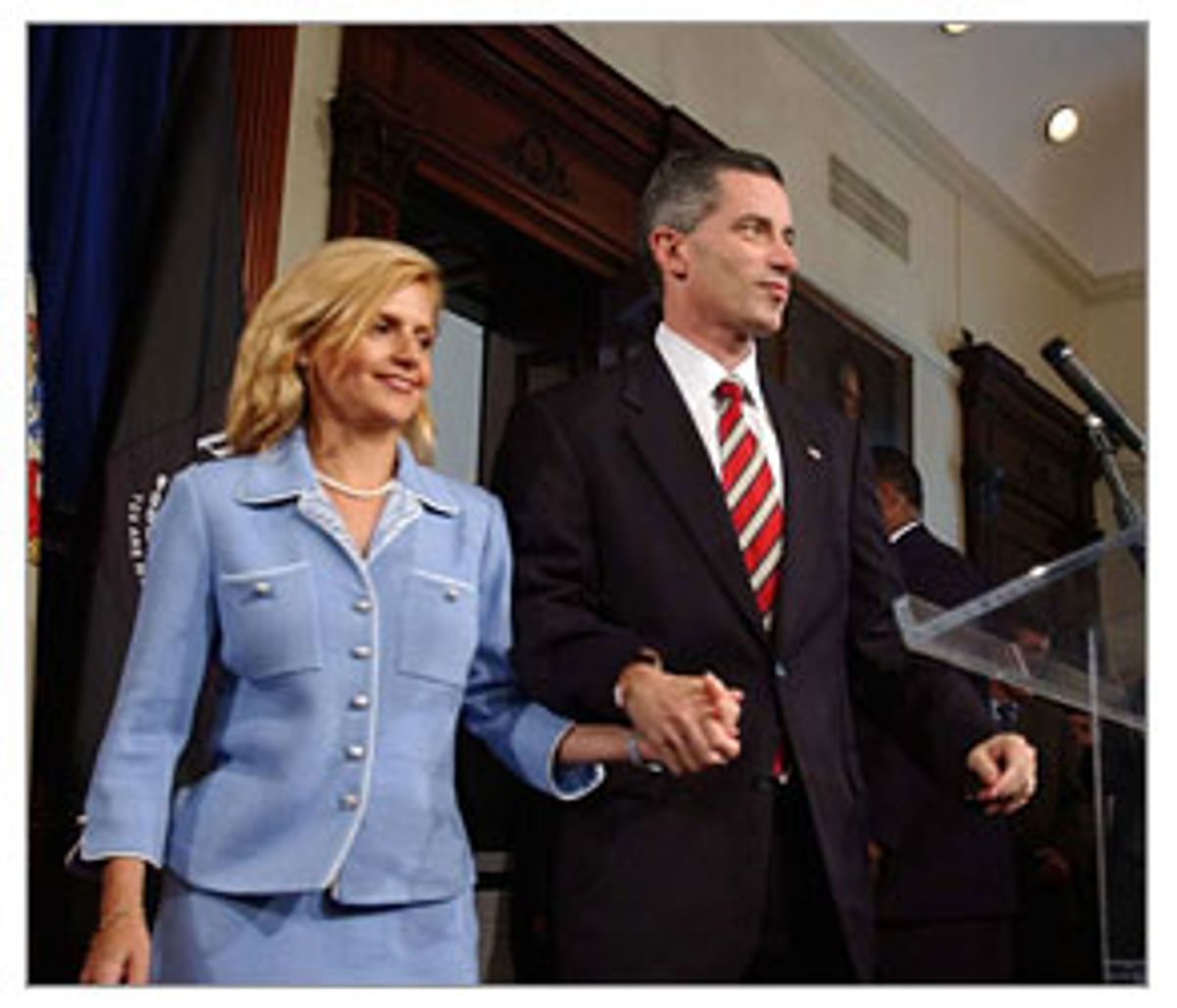 New Jersey Gov. James "I'm a Gay American" McGreevey has a pretty mouth. Has any pol ever looked better wrapping his lips around his own resignation? That was my first thought while watching the big gay press conference last week that served as the 47-year-old governor's coming out and resignation -- followed closely by, "Wait, what the hell is up with his wife?" If I called a press conference to announce that I was a straight American, that I had conducted an affair with a woman that was going to destroy my career (much of which is based on my cocksucking cred), the only way my boyfriend would stand at my side beaming would be if he was holding my recently amputated testicles behind his clenched teeth.

The reaction of the wronged wife is almost always the most interesting aspect of a juicy political sex scandal; the public seems to look to her before deciding how it should react. Remember when William Jefferson Clinton was impeached for ... well, take your pick: for having an adulterous affair, for lying under oath about having an adulterous affair, for having the nerve to win two elections. When Hillary made it clear she was going to stick with Bill, the American public did the same. Of course, it helped that rumors about Clinton's zipper problems had trailed him throughout his political career -- Americans knew he was a horndog when we elected him. Finding out he got it on with an intern didn't tell us anything we didn't already know or suspect.

When the Lewinsky scandal broke, there was a lot of speculation about What Hillary Knew and When She Knew It. Many wondered if Bill and Hillary's marriage wasn't a loveless, sexless sham, a marriage of political convenience, a marriage about power, not love. Many concluded that Bill and Hillary must have had an "understanding" about outside sexual contact. For some, Hillary's decision to stay with Bill confirmed their suspicions about the existence of an understanding: Hillary wasn't angry, the "understanding" theorists concluded, because Bill wasn't doing anything she hadn't given him the green light to do. (Except, of course, for getting caught.)

Watching Mrs. McGreevey beam at her pretty-mouthed gay American husband, I found myself wondering aloud to my pretty-mouthed gay American boyfriend (I have a thing for pretty mouths, what can I say?) whether like the Clintons before them, Mr. and Mrs. McGreevey might have had an understanding. Just as Hillary had to know Bill could be true to her only in his fashion, so it seems pretty clear that Mrs. McGreevey had to know her husband was a homo all along. The first Mrs. McGreevey apparently knew: When asked by the New York Times whether she was aware of her former husband's sexuality, the woman who divorced McGreevey pointedly refused to answer the question. In the Seattle Times, McGreevey's former mother-in-law flat-out said that she knew. And then there were all those rumors about McGreevey that have been circulating in New Jersey for years. To my mind, only having already known could explain Mrs. McGreevey's composure, her compassionate, affectionate smile during the press conference. She didn't look like a woman who had been shocked to discover that her husband was getting it on with the hired (male) help.

If she did know that her husband was gay and didn't care, Mrs. McGreevey isn't alone. It's impossible to know how many straight women are happily married to men that they know are gay -- the census hasn't gotten around to that question yet -- but they're out there. I know two married straight woman/gay man couples: In both cases, the men and women were friends who decided to marry after concluding that romantic love simply wasn't in the cards for them. Their marriages are loving compromises that have allowed all involved to settle down and start families. Defeat and resignation turned into something lasting and good. Is that the case with the McGreeveys? Until we find out -- until Mrs. McGreevey's inevitable book is published -- it seems plausible that she knew about her husband's sexual nonconformity and didn't care.

Of course, for a high-profile couple like the McGreeveys, their marriage could be about something more than affection and resignation. Some people marry for status and power -- another charge laid at the feet of Bill and Hillary by angry conservatives. Oddly enough, the obtaining and hoarding of status and power are the true hallmarks of "traditional marriage." If Mrs. McGreevey married for those reasons, she's in good company. But she's unlikely to remain married for long, once her husband is no longer governor.

But let's suppose that Mrs. McGreevey didn't know. What if she looked so composed during the press conference because she downed a handful of Xanax a moment or two before it began? What if she, like most straight women who discover their husbands are gay, is devastated by the news? (A sample of the self-help titles available on Amazon: "The Other Side of the Closet: The Coming-Out Crisis for Straight Spouses and Families," "My Husband Is Gay: A Woman's Survival Guide.") If that's the case, I hope the religious right has the decency to send Mrs. McGreevey -- and every other woman out there who discovers she's married to a closeted gay man -- an apology. For isn't duping poor straight women into marrying us the religious right's advice to gay men?

According to the Falwells, Robertsons, and Santorums of the world, I'm supposed to think less about the South African Olympic men's swim team and more about hell (hot!) and eternity (long!). Then I'm supposed to go find a woman I can trick into marrying me. So what if the foundation of my marriage is a lie? So what if I have to struggle against my sexual and emotional needs all my adult life? Do what you gotta do, faggot: If you need to think about other men -- like, say, all those nice boys on the South African Olympic swim team -- in order to perform sexually for your wife and make some babies, Sen. Santorum says go for it. And if the truth about my sexuality were to ever come out -- if I were, say, threatened with a $50 million lawsuit by my same-sex piece on the side -- the poor woman I've lied to will feel humiliated and violated but, shit, no one ever said that marriage was all sweetness and light, right?

If it does nothing else, the McGreevey marriage highlights the chief absurdity of the anti-gay-marriage argument: Gay men can, in point of fact, get married -- provided we marry women, duped or otherwise. The porousness of the sacred institution is remarkable: Gay people are a threat to marriage, but gay people are encouraged to marry -- indeed, we have married, under duress, for centuries, and the religious right would like us to continue to do so today -- as long as our marriages are a sham. As long as we're willing to lie to ourselves, our wives, our communities, our children, and for someone like McGreevey, our constituents. A closeted gay man like McGreevey can even marry twice and have both his marriages regarded as legitimate. Even as an openly gay man, McGreevey can remain married to his wife and smoke all the pole he likes on the side. There ain't no law agin' it, Sen. Santorum. But how does this state of affairs protect marriage from the homos, I wonder? If an openly gay man can get married as long as his marriage makes a mockery of what is the defining characteristic of modern marriage -- romantic love -- or if he marries simply because he despairs of finding a same-sex partner, what harm could possibly be done by opening marriage to the gay men who don't want to make a mockery of marriage or who can find a same-sex partner?

Gay Americans -- the out variety -- no doubt expect the newly out McGreevey to follow the standard high-profile/celebrity coming out story arc: Write a book, get a boy/girlfriend, go on "Oprah," make ass of self. (See: Greg Louganis, Ellen DeGeneres, Rosie O'Donnell, et al.) Not me. I'm hoping for a different outcome this time. In my perverse heart of hearts, I hope Mr. and Mrs. McGreevey remain married. It might help Americans realize that people marry for lots of different reasons, and that romantic love need not be the only reason -- or even a reason -- that two people decide to spend their lives together.

And if the idea of a gay man married to a woman makes America uncomfortable, well, perhaps they should let us marry each other.