Olympics: It's time for women's gymnastics to grow up. Plus: LeBron James shows that the NBA way takes your breath away. And: More. 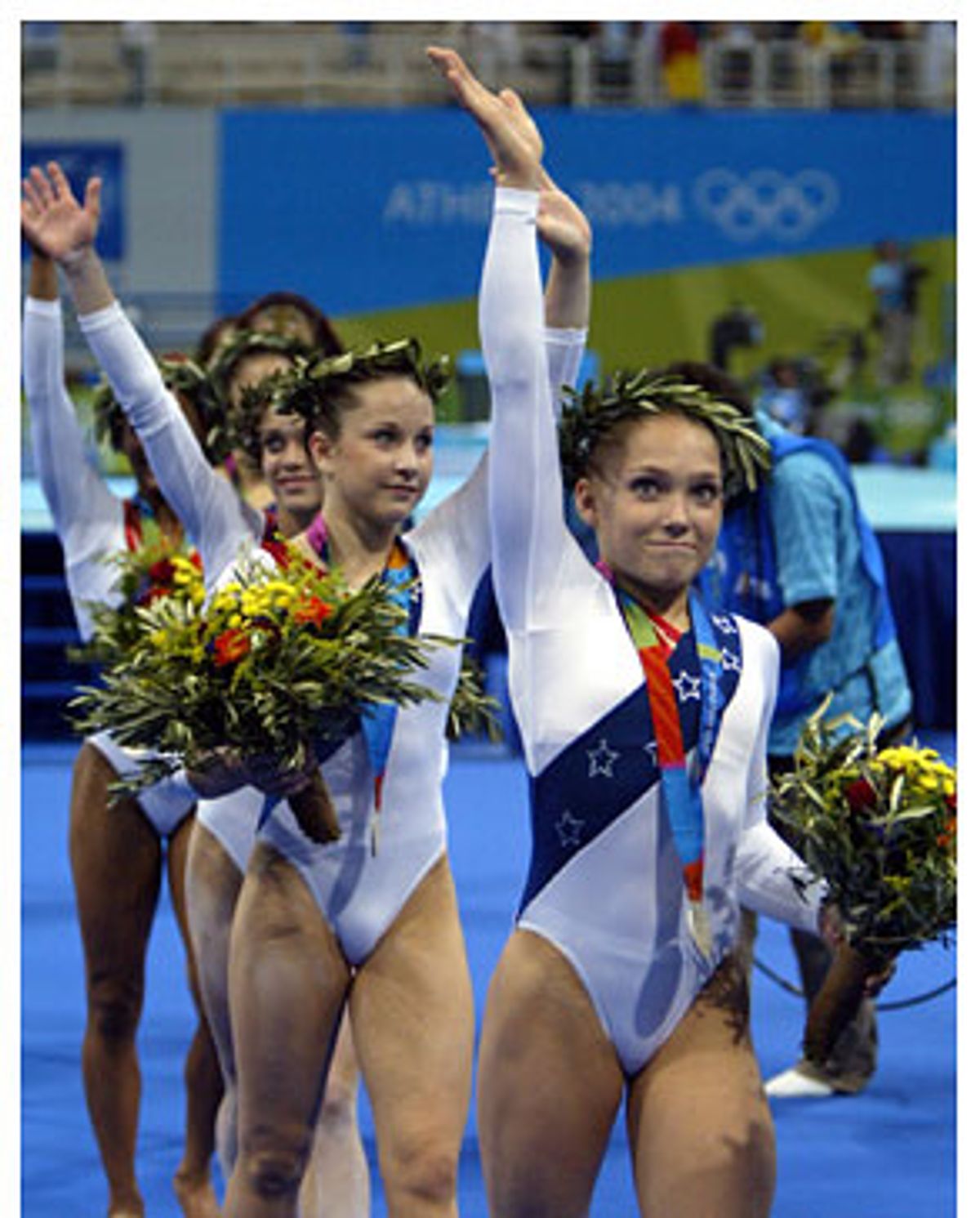 Bela Karolyi, who has handed off his bizarro Svengali powers over the U.S. women's gymnastics team to his wife, Marta, said that Tuesday night's team gymnastics competition was the best he'd seen in 20 years. OK, if he says so.

I tried to get caught up in the drama of the little Romanians hitting their routines in clutch fashion to beat out the little Americans, but I'm finding that the older I get, the less I can stand to watch women's gymnastics.

"I'm happy because these children have a crown, a medal," said Romanian coach Octavian Belu, and I'm happy for them too, because it's nice when happy times come for abused kids. Oh, I'm sorry, I meant to say dedicated, hard-working youngsters.

I was happy to see a couple of 25-year-olds prominent in the team finals, Mohini Bhardwaj of the United States and Svetlana Khorkina of bronze-winning Russia. Of course, both are considered freakish for still being Olympic gymnasts at that advanced age. The Americans even have a 26-year-old, vault specialist Annia Hatch.

Bhardwaj, unwelcome in the little-girls-only world of official gymnastic training, famously had to pay her own way over the last few years, at one point enlisting financial help from Pamela Anderson, which I mention only for the sake of page views.

Even with those two old birds, Bhardwaj and Hatch, the average age of the U.S. team is 19 and a half. This is a problem. A sport in which women become washed up years before they reach their athletic prime is a sport that needs redesigning. A sport that supposedly emphasizes strength and athleticism, among other things, but for which you're in trouble if you tip the scales in triple digits and you're just about disqualified if you top 115 is a sport that needs fixing.

Enough with the pretty little girls. This stuff might have been OK when athletic opportunities for girls were severely limited, but women can be and are real athletes on the world stage now. The U.S. women's basketball team has an average age of a little over 28, and the youngest player, Diana Taurasi, is 22. The soccer team averages just under 28, and its youngest member is 19-year-old Heather O'Reilly.

Both teams skew a bit old, but not outrageously so, and they're both gold medal contenders. You get a bunch of great athletes together and these are the ages you tend to find, mid- to late 20s. If you're years into retirement age for a sport at that age, then it's a children's sport and should be reconfigured for adult bodies when grown-ups play. Think T-ball and baseball.

Instead, gymnastics tries to reconfigure women's bodies, to keep them childlike. It's sick and wrong. And when so much emphasis is placed on how cute and pretty they are -- the full make-up, the glitter, the cutesy dance moves -- it's off-the-chart sick and wrong.

The men's gymnastics team -- we're talking about the same sport here, but without the music and makeup and strange psychosexual dynamic -- has an average age of just over 24. The men's team's star, 21-year-old Paul Hamm, is, with his twin brother Morgan, its youngest member by two years. The Hamm twins would be geezers if they were female gymnasts.

There's nothing wrong with the sport of gymnastics. It's a series of tests of strength, balance and agility that take magnificent skills to master. It's just the politics of the judging on the women's side that need to be fixed.

This is the 21st century. It's time to ditch the little-girl fantasies and let women play.

The U.S. men's basketball team avoided another upset Tuesday, holding off a gritty Greek team in front of a thundering home crowd, 77-71. The Americans improved on their 3-for-24 3-point shooting against Puerto Rico by hitting four of 21. "I believe we will make an outside shot sometime in this tournament," coach Larry Brown grumbled.

But the effort was better than in that opening loss. The NBA stars showed flashes of defensive intensity and hustle and an enthusiasm that closely approximated actual team spirit. They were led by Lamar Odom, who should have been in bed with a nasty virus. And captain Allen Iverson played with a broken thumb on his shooting hand, injured against Puerto Rico.

The U.S. capped a 9-0 second-quarter run on back-to-back layups by LeBron James, the second of which came off his own steal. We've all heard and engaged in a lot of talk about how the Americans don't know how to play basketball the right way, in Brown's favorite phrase, and they need to learn how from the crisp-passing rest of the world.

But on the first of those two layups, James took an outlet pass from Stephon Marbury and roared downcourt for a dunk. His speed and power were breathtaking, like all of a sudden the laws of physics that had ruled the tournament so far had been suspended for a moment, and even the rabidly partisan Greek crowd gasped. I don't know how you can watch the effective but earthbound and pedestrian play of the best international teams and say it's better than that.

Yeah, it'd be nice if the American team had an unathletic sharpshooter or two to knock it down from outside, but this idea that international basketball is somehow better than NBA ball just because it results in wins in international play against a patchwork American team, well it's nuts.

And by the way, every single one of you who complains about how the U.S. men don't "play the right way," and how for your money you'd rather see a fundamentally sound team that knows how to move the ball, find the open shot, play solid team defense, fight for loose balls and box out on rebounds: If you're not enthusiastically watching the U.S. women, you just need to shut up, because they do all of those things.

The first sport of these Olympics that's really caught my eye in that "I never pay attention to this sport but now I'm hooked" way is whitewater canoeing and kayaking.

As dull as sculls are -- rowing contests in which the boats stay in their lanes and go in one direction, not especially rapidly in the scheme of things -- that's how much fun the whitewater sports are. Well, maybe they're not that much fun, but it's hard to believe they arose from the same idea as sculls: Get in a boat and row.

The whitewater sports are one of those deals where a reasonably athletic person can watch world-class competitors and go, "No way I could ever do that well." It requires strength, quickness, balance, good vision, quick thinking and probably a bunch of other things I'm not thinking of. Oh, yeah: Not getting fazed by being suddenly dunked. And the rapids are, well, fluid enough that one competitor's run doesn't look exactly like the next one's, which is a problem with most race-the-clock sports.

Besides, I'm down with any sport where the word "tippy" can be used in a sentence. Analyst Jon Lugbill, an all-time great rower himself, was talking about 6-foot-4 Robin Bell of Australia when he said, "Paddlers come in all sizes, but normally you want to be a little shorter with your upper body so you're not as tippy in the boat."

Once I had a few beers and got a little tippy on the Staten Island ferry.

But the score bug disappears during the men's matches too, and they're demurely dressed in long shorts and tank tops.

And I don't know the answer to the really important question about beach volleyball, which is: Why don't the men wear skimpy outfits too?

I did a double-take when I saw him celebrating his victory -- a Middle Eastern man in a head scarf and an ammo vest jubilantly holding a shotgun over his head. Whoa! Did I switch to a news channel? Oh, I see.

Then I noticed that bronze medalist Wang Zheng of China had a "CCCP" sticker on his shotgun stock. Whoa! Did I flash back to 1976 again?

You kids missed out. If you think rooting against the Yankees, Lakers or Duke is fun, you should have been there to snarl at the Soviet Union and East Germany, who were not only commies, but used doped-up professionals against our virtuous, puppy-saving Western amateurs.

The United States' main rivals these days are the Chinese and the Australians. It's not the same. We have our differences with the Chinese, but they're not the heartless monolith the Eastern Bloc was, and they even have a kind of underdog charm, if such a thing can be said about the world's biggest country, one guilty of human-rights abuses.

The Australians are just kind of a bizarro-world version of Americans. Hard to hate them, even if they did send us Paul Hogan.

This is a better world. But at Olympics time, it was more fun to have bitter enemies.