The Bush administration's empire building is trampling on who we are and were always meant to be -- a republic. 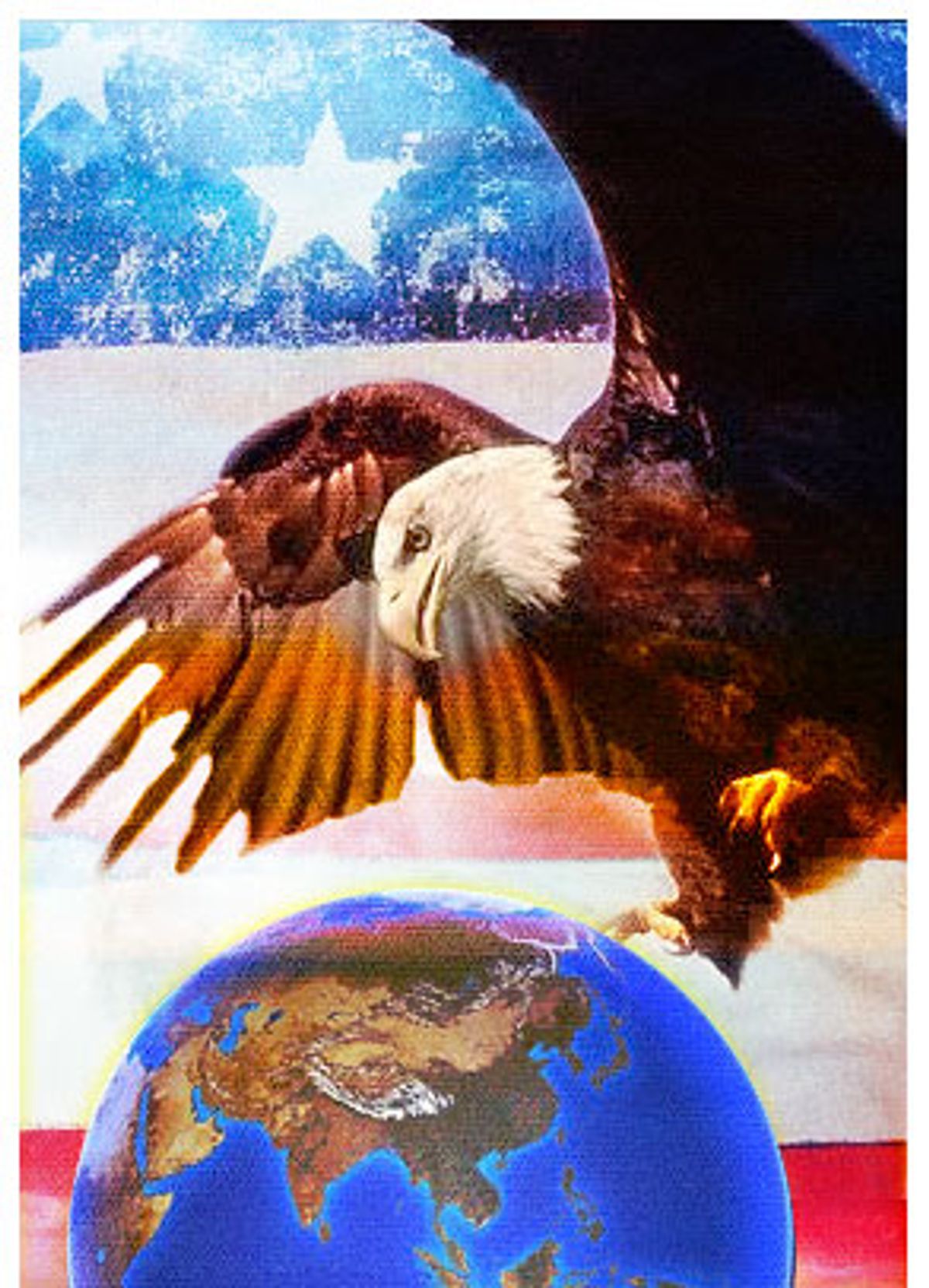 The cause of imperialism, weakened for a time by the fall of the European and Soviet empires, has found new advocates. The fact that the 21st century imperial power happens to be the United States of America, whose independence from colonialism was declared 228 years ago, seems not to matter. The neoconservatives' project to position the United States as the world's dominant power -- and to use that power to govern in venues chosen seemingly by them alone, and collectively where reasonably easy but unilaterally where necessary -- has been advanced and saluted.

A careful review of the statements of President Bush and his administration up to the declaration of victory in Iraq yields little evidence of the true purpose of America's invasion. The world is now familiar with the arguments: Iraq possesses weapons of mass destruction; Iraq has or will soon have a "nuclear capability"; Iraq harbors and supports terrorists planning attacks on the United States; Iraq itself is a threat to U.S. national security. All have proved untrue and are no longer offered as justification for America's "preventive" war on Iraq, an action with precedent in U.S. history possibly only in the Philippines more than a century ago.

Today the president and his team offer the rationalization that deposing Saddam Hussein was necessary to achieve peace in the Middle East. This argument was never used in the run-up to war for the simple reason that it condoned an act of empire. Leave aside the fact that the argument is severely flawed, as subsequent history has shown. The United States is now bogged down in urban warfare against indigenous militias, a style of warfare for which it is largely unprepared and that causes unsustainable levels of civilian casualties. The war has substantially contributed to anti-American sentiments throughout the region and possibly throughout the Islamic world. Peace in the Middle East is now farther in the distance, not closer.

The costs to U.S. taxpayers will ultimately exceed the $200 billion honestly predicted before the war by Bush economic advisor Lawrence Lindsey, who was fired for his candor. Somewhere between 35,000 and 50,000 civilian Iraqi casualties are also among the costs. Much more important to most Americans are the almost 10,000 U.S. combat and noncombat (including psychological) casualties. We don't know the exact number because the Pentagon will not release noncombat casualty figures and the "free" press does not seem capable of finding out.

Before the war I predicted that if the Iraqi Republican Guard chose to fight in the cities, American casualties could mount to between 5,000 and 10,000. Gen. Barry McCaffrey predicted as many as 50,000 American casualties under these circumstances. We were both ridiculed by conservative editorial boards and commentators. Instead of the Republican Guard, we are now faced with religious militia carrying out the same strategy.

Had the international legal standards for preemptive warfare been met, it could plausibly be argued that America's invasion of Iraq was not imperial in nature. That traditional standard permits preemptive action where a threat is "immediate and unavoidable," a standard clearly not met where Iraq is concerned. So, much else is at work here: the fanciful, but not idealistic, notion that the United States can invade and occupy a nation situated in the center of the complex and troubled Middle East, install a favorable democratic government, and use its position as friendly military occupier to condition the behavior of neighboring nations, introduce "democracy" at the point of a bayonet if necessary, and bring Middle Eastern combatants to the bargaining table.

This project has at least two fatal flaws. It is an act of empire. And it was never disclosed to the American people so that they, acting in their capacity as popular sovereigns, could ratify it. Those who applaud this strategy include eminent British historian Niall Ferguson, who basically argues that America is an empire and ought just to get on with it, and writers such as Robert Kaplan, who, as an American, understands the difficulties of selling imperialism to a republican polity and therefore urges empire by "stealth."

Why should we care one way or the other? The answer is simple. The United States cannot be simultaneously republic and empire. For evidence, see Rome (circa 65 B.C.). We salute the flag of the United States of America "and the Republic for which it stands." Since the time of the Greek city-states, republics have shared certain immutable qualities: civic virtue or citizen participation, popular sovereignty, resistance to corruption (by special interests) and a sense of the common good. Empires consolidate power in the hands of the few; seek expanded influence, by force if necessary; export centralized administrations to foreign lands; dictate terms to lesser powers, and manage foreign occupied peoples for their own political and commercial advantage.

The Bush administration neocons claim none of these characteristics for their imperial actions in Iraq. They claim to want only what is best for the Iraqi people. The Iraqi people seem to be resisting, sometimes in murderous ways, these benign boons. Even more to the point, even if one were to concede the best motives to the neocons (and that represents a real struggle), the imperial project is not who we are or who we should wish to become. Woodrow Wilson cannot be claimed as prophet here, even cynically, for his internationalism was benign, not militaristic, and internationalist, not unilateralist. These are huge differences.

The imperial project is in direct contradiction to America's constitutional principles. We are a republic, not an empire, and we are a republic much in need of restoration, as the erosion of the quality of resistance to corruption and the erosion of the exercise of civic virtue testify. America's 21st century project should be restoring our republic, not projecting imperial power into venues we are, by our very nature, unequipped to dominate.

Gary Hart, a former U.S. senator from Colorado and cochairman of the U.S. Commission on National Security/21st Century, is senior counsel at Coudert Bros. and author of "The Fourth Power: A New Grand Strategy for the United States in the 21st Century."