In a flaming speech to a firefighters convention, the Democratic candidate finally lashes back at the "lies" and "dirty work" of the Bush campaign. 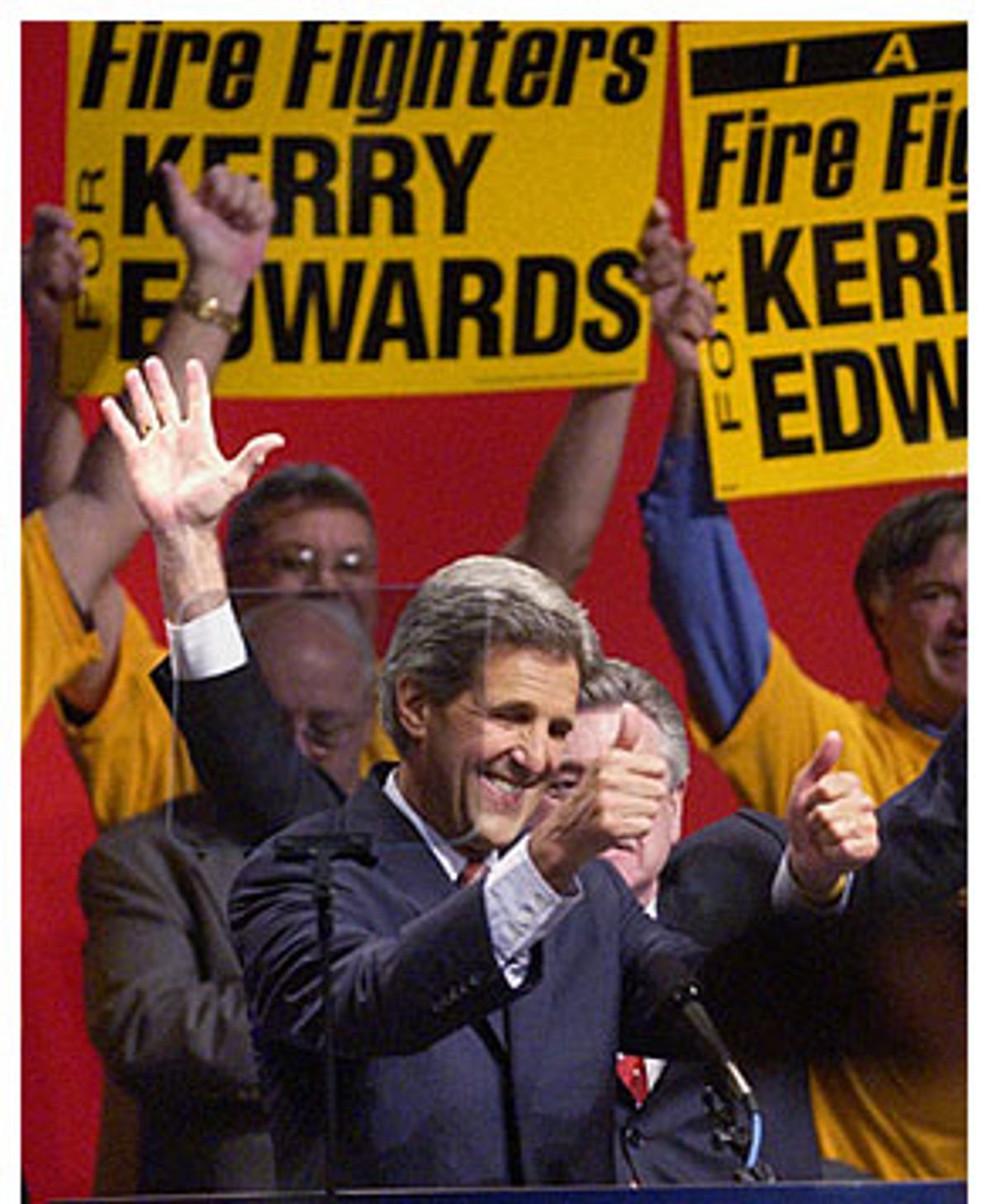 Editor's note: After weeks of taking fire from Republican Vietnam veterans who have alleged that he has embellished his war record, Democratic presidential candidate John Kerry finally shot back Thursday at his critics. In a fiery speech to the International Association of Fire Fighters convention in Boston, Kerry ripped into President Bush for allowing front groups like the Swift Boat Veterans for Truth, which is funded by Bush donors, to do his dirty work.

If he wants to have a debate about our service in Vietnam, here is my answer: 'Bring it on,'" declared Kerry to loud cheers.

Kerrys combative response came as a big relief to Democratic supporters who have been urging him to answer the Republican attacks and to take the fight to Bush. Frustrated by the Kerry campaigns hesitancy, independent groups like MoveOn have jumped into the fray, running their own TV ads comparing Kerrys heroic Vietnam service to Bushs spotty military record in a "champagne unit" of the Air National Guard.

Below is an edited transcript of Kerry's speech.

Aug. 19, 2004  |  It's been a long journey to this moment. Since I entered this race a year and a half ago, Ive traveled from one end of this country to the other -- from great cities to the great Southwest, from the flag-draped front porches of Main Street America to the small family farms that dot the Midwest. Im proud that weve made this great journey together.

All of you here today stood with me right from the beginning -- and you never left my side. In those long days in Iowa, you were there. In those cold days in New Hampshire, you were there. When the polls were down, and they counted us out, you never gave up hope. And today, wherever I go, I look up, and the first thing I see are those gold and black T-shirts, and those gold and black signs -- and I know that once again, my friends are by my side.

These are the values you live by, day in and day out, when you kiss your families goodbye, and head to the station  knowing full well that with the sound of an alarm, you might be called into harms way. I know what thats like. And more than thirty years ago, I learned an important lesson -- when youre under attack, the best thing to do is turn your boat into the attacker. Thats what I intend to do today.

Over the last week or so, a group called Swift Boat Veterans for Truth has been attacking me. Of course, this group isnt interested in the truth -- and theyre not telling the truth. They didnt even exist until I won the nomination for president.

But heres what you really need to know about them. Theyre funded by hundreds of thousands of dollars from a Republican contributor out of Texas. Theyre a front for the Bush campaign. And the fact that the President wont denounce what theyre up to tells you everything you need to know -- he wants them to do his dirty work.

Thirty years ago, official Navy reports documented my service in Vietnam and awarded me the Silver Star, the Bronze Star and three Purple Hearts. Thirty years ago, this was the plain truth. It still is. And I still carry the shrapnel in my leg from a wound in Vietnam.

As firefighters you risk your lives every day. You know what its like to see the truth in the moment. Youre proud of what youve done -- and so am I.

Of course, the President keeps telling people he would never question my service to our country. Instead, he watches as a Republican-funded attack group does just that. Well, if he wants to have a debate about our service in Vietnam, here is my answer: "Bring it on."

And let me make this commitment today: their lies about my record will not stop me from fighting for jobs, health care, and our security -- the issues that really matter to the American people.

The situation in Iraq is a mess. That is the Presidents responsibility and he owes the American people an answer.

America is on track to lose more jobs than its gained under George Bush and he supports a tax code that rewards companies for shipping jobs overseas. He owes the American people an answer.

Health care costs have exploded out of control. The President has done nothing and he owes the American people an answer.

The middle class is paying a bigger share of Americas tax burden. The President needs to answer to the American people why that is fair.

Well, just saying the job is getting done doesnt make it so. My friends, let me tell you when the job will be done.

The job will be done when every firehouse in America has the firefighters and the equipment they need to protect our communities. Right now, two-thirds of firehouses are understaffed, and were not spending one dime to fund the SAFER Act. The job will be done when all our firefighters have the resources to fight the war on terror here at home. Right now, in too many places, your budgets are being cut to cut taxes for the wealthiest Americans.

And, my friends, the job will be done when we stop opening firehouses in Baghdad while closing them down here in the United States of America.

For four years, we've heard a lot of talk about values. But values are not just words. They're what we live by. They're about the choices we make, the causes we champion, and the people we fight for.

Let me tell you about my values. The way I see it, all of you are full-time heroes, and you deserve nothing less than Americas full-time support.

Thats why, for 19 years in the Senate, Ive fought for better equipment and training, for tracking technology and workplace protections. I sponsored the Federal Presumptive Disability legislation, because when federal firefighters get sick because of their job, they deserve our help. And Ive fought for collective bargaining for all employees  including federal employees  and Ill take on anyone who tries to take it away.

And thats just the beginning. When John Edwards and I are in the White House, were going to fund the FIRE Act and the SAFER Act. Were going to create the Father Mychal Judge fund to hire 100,000 new firefighters all across America. And were going to be an Administration that stands with labor. Let us never forget that every single one of the firefighters who went up the stairs of those burning towers, and through the doors of that warehouse in Worcester  all of them were members of organized labor. They believed in the right to organizethe right to overtime paythe right to have a Secretary of Labor who comes from labor. And we do too. Those are our values, and were going to live and lead by them every day that were in the White House. And thats how were going to get the job done.

Finally, were going to really get the job done by creating an economy that works for you and your families, where when you work hard, you can pay your bills and create a better life for your children.

Right now, middle class Americans are being squeezed like never before. In the last three years, weve lost 1.8 million private sector jobs. And the new jobs being created pay $9,000 less than the ones weve lost. At the same time, gas prices are up, childcare costs are up, tuition is up, and family income has fallen $1,500. As a result, today, weve got people working two jobs, three jobs, just to get by. Thats not the American way.

To make matters worse, health care costs are through the roof. The average American family has seen their premiums increase by more than $2,600 in just the last three years. And I know that some of you have seen the results at the bargaining table, where you win an increase in wages only to see it disappear to pay for health care.

This is bad news for our families and even worse news for our economy. Studies show that rising costs have forced many employers -- especially those in industries that pay high wages -- to slow their hiring. And many have begun hiring more part-time and temporary workers, who often dont get health insurance at all. So were losing good jobs and replacing them with ones that just dont pay the bills.

When Im President, America will stop being the only advanced country that doesnt understand that health care is not a privilege for the elected or the connected or the wealthy -- but a right for all Americans. John Edwards and I have a plan to reduce health care costs and turn our economy around. Were going to provide tax credits to make health insurance more affordable. And were going to let all Americans buy into the same plan available to members of Congress. In total, well cut the average familys premium by $1,000.

The issues Ive been talking about today -- these arent Republican issues or Democratic issues. Theyre American values. And frankly, it doesnt make one bit of difference to me what party you belong to or who youve voted for in the past. Thats not what this election is about.

This election is about building an America thats stronger at home and respected around the world. Where families sleep soundly at night knowing you have what you need to do your jobs. An America where we once again honor those who serve our communities and protect our families.

Theres a simple rule you follow in every fire you fight: You never go in alone -- you always have a brother or sister by your side. Well, today, I want you to know that come next January, you will have a brother in the White House who stands with you every hour of every day. I will be a president who goes into the Oval Office every morning knowing that my job is to help you do yours. I will work my heart out for you, and I will never let you down.

But once again, I cant get there without your help. In the closing weeks of this campaign, Im going to be traveling all across this country, talking to Americans about our values and our vision for the future. And I need you to do the same. I need you to go back to your states and knock on every door, make every call, and register every voter you can. Tell people about who we are, what we stand for, and what were going to do for America. And on election day, you make sure that every single person youve reached goes to the polls and makes their voice heard. In a race like this, we cant afford to lose a single vote.

This isnt going to be easy, but firefighters are no strangers to tough challenges. I know that working together, we can take back America for its heroes. We can reach for the next dream. We can look to the next horizon. For America, the hope is there. The sun is rising. Our best days are still to come. Thank you, God bless you, and God bless the United States of America.