My big fear was we wouldn't be biologically able to have a child. It turned out we were emotionally unable to do so. 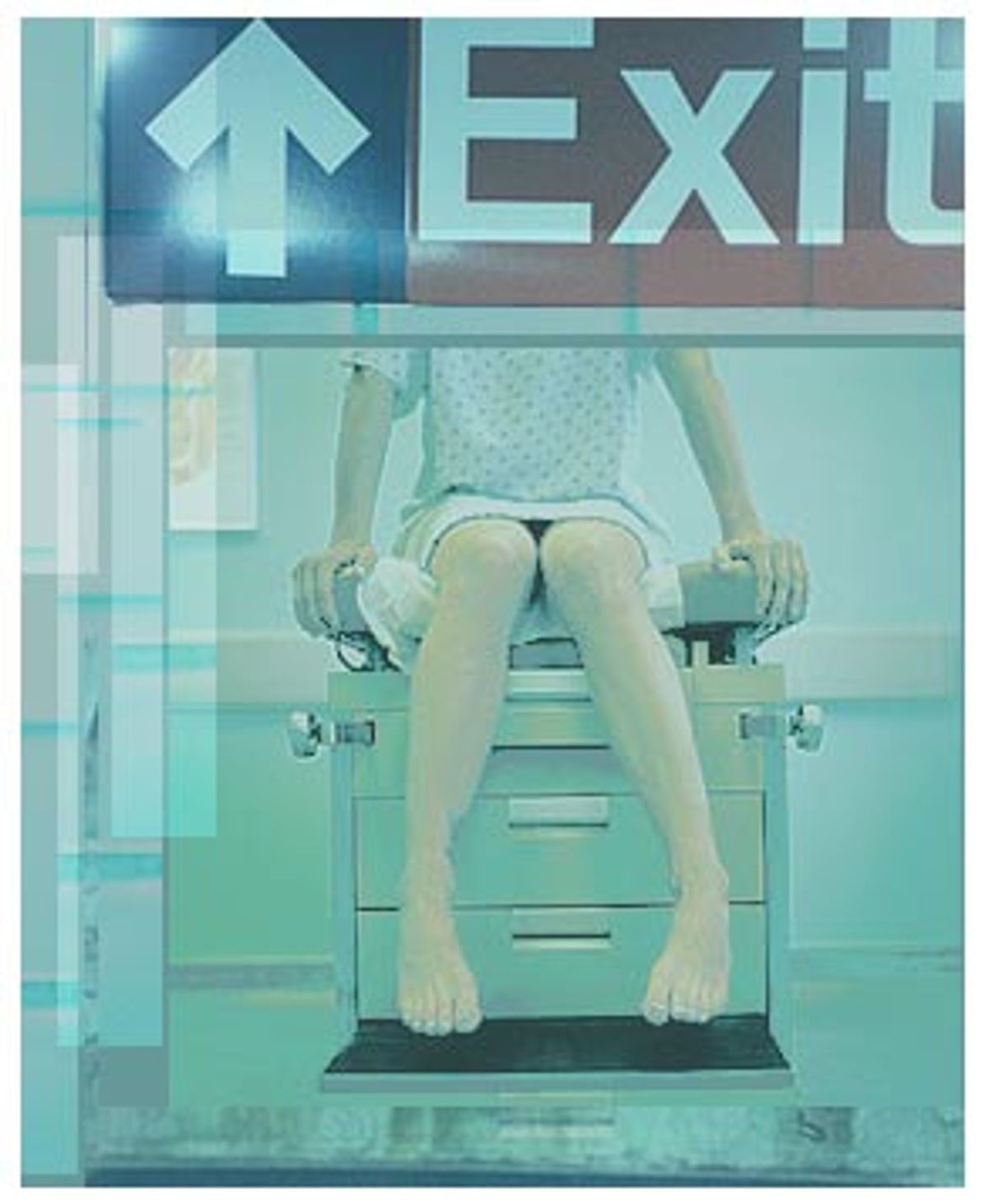 I arrived in the cramped basement of the Washington Surgi-Clinic at 8 o'clock on a Saturday morning. Birth-control brochures and women's magazines were scattered throughout the waiting room. I lay down on my side, on one of the padded benches that lined the wall. Nausea and fatigue blotted out everything else.

It was the start of the July Fourth weekend, two summers ago, and I was there for a "no-frills" abortion, provided by the clinic for $400. Four other women were there -- young women, most with mothers or friends, one with a man who appeared to be her boyfriend. At 37, I had a good 15 years on any of them. I'd been married for seven years, my husband and I had good jobs, and I was pregnant -- isn't that what women my age wanted?

While I'd never exactly yearned to have a baby, I'd always assumed that eventually I would. I loved my husband, William, and wanted to spend my life with him; to not have a child, it seemed, would be to leave a piece of the picture missing. Although choices about the "when" and "how many" of having children have changed a great deal for women like me over the last couple of decades, the "whether" has not. The media oozes it: Having a family makes you whole. Look out, or you'll become one of those miserable women in their 30s and 40s, desperate to get pregnant, to adopt a baby from China. Motherhood still seems less a choice than a sine qua non.

William said he wanted to have a child at some vague point in the future, and I believed him. But the years went by, and it was never the right time. "When I finish my dissertation," he'd say. "When I get hired." After he got a job teaching philosophy at a local university, the answer was, "After I write my book." We avoided lengthy conversation on the topic, probably because we both sensed that the outcome would be something neither of us wanted to face.

In fact, in those last years of the marriage, we weren't talking much about anything. Our relationship was disintegrating, like a satellite slowly breaking apart in the atmosphere and falling to earth. We argued daily about everything, from my leaving a stray tea bag in the sink to the Israeli-Palestinian conflict. I'd threaten to leave him. He'd ask me not to, tell me things would get better. The hallway of the apartment we'd moved into a year ago was still stacked with cardboard boxes; we'd never even finished unpacking. Years ago I'd fallen in love with William -- charming, good-looking, an outstanding teacher -- but even then I knew that he was obsessed with his work. It took me longer to see his other obsession: pointing out my shortcomings. He criticized the way I talked, walked and dressed. He was unkind to me most of the time -- not abusive, but impatient, or, alternately, neglectful. I'd grown up around men I was afraid of -- my father was a frustrated academic whose unpredictable rages sent me scurrying to hide in my room -- so it didn't seem that extraordinary. And, of course, I thought I loved him too much to live without him. Absent a catalyst, like an affair or a drug problem, a bad relationship can grind on for a very long time.

Meanwhile the desire to have a child burned a separate, parallel path in my mind throughout my mid-30s. I was consumed with the fear that it was too late, that I would not be able to get pregnant at my age. My younger sister had become pregnant several months before, piquing my envy and anxiety. That spring, I began using an ovulation predictor kit, expecting it to demonstrate that my fertility was on the blink. But it didn't. William and I actively tried to conceive. If that sounds irrational, it was; no doubt he, like me, felt terribly unhappy in the marriage, yet found the idea of splitting up unthinkable.

That year, over Memorial Day weekend, I went to California to visit my sister and her new baby. I noticed how much calmer and happier I felt without William there criticizing me, bickering with me. I went home, thinking about the possibility of life without him.

One evening not long after I returned, I doubled over with abdominal pain and violently threw up. I thought it was food poisoning. William took me to the doctor the next day. We navigated a maze of offices in the medical building as I went from one doctor to another, taking one test after another.

William was impatient. Emergencies, crises of any kind, agitated him. He testily criticized me for not being assertive enough with the receptionists and not being articulate enough with the doctors. In the waiting room he began reading the book he'd brought, ignoring me.

Eventually we were seated in an exam room, and the doctor came in and said, "You're pregnant." My first reaction was a fleeting giddiness -- I'd done it! -- immediately followed by the conviction that I did not want to, could not, raise a child with William. If this was the way he treated me when I was sick and in pain, how could I depend on him during a pregnancy, and in the years thereafter?

I spent most of the next few weeks floating seasick on the bed or the couch. I went through all my miserable options: single parenthood, separating but having the child, not having the child, staying with my husband and giving birth. I never felt a moment of utter clarity; just a consistent pull toward the conclusion that I could not have a child with William, could not count on him to treat me with respect, could not by way of a child yoke myself to him for the next 20 years.

And, with or without William, the idea of having a child overwhelmed me. I had few local friends or family, and lived in a city I detested. And yes, I was selfish: The prospect of having a child and raising it on my own felt insurmountable, like the end of my life. For a woman like me who'd lived an independent life, the idea of giving birth and raising children began to seem almost a retro, labor-intensive enterprise, like growing your own vegetables or sewing your own clothes. There's a reason why women in the 1960s and '70s tried to escape this way of life -- it's hard work, and it's not for everybody.

Yet when I suggested terminating the pregnancy, I hoped, against all the evidence, that William would pull me back from the precipice, assure me that we'd work things out, that he'd take care of me. He didn't. Panicked about the impact a child would have on his career, he readily agreed to an abortion. I scheduled the procedure for the earliest date I could have it.

It took another year and a half before William and I could untangle our lives and separate. The abortion blindsided me: Humiliated and humbled, I couldn't believe that I was capable of terminating an intentional pregnancy. My big fear had been that we wouldn't be biologically able to have a child; it turned out that we were emotionally unable to do so.

The abortion never troubled my husband deeply (it wasn't his body; he'd never wanted a child all that much to begin with). While I don't regret ending that pregnancy, it still hurts to be childless. I shut the door on motherhood, quite possibly forever, and in the starkest way possible.

When, as happens with ever-increasing frequency these days, a friend announces that she and her partner are expecting, it quietly knocks the wind out of me. When I come home from spending a long weekend with my raucous 2-year-old niece, my apartment seems filled with too much quiet, empty space. At those moments, I tell myself that I've ruined my life. It's not that simple, though.

Laura Walters is the pseudonym of a writer living in Washington, D.C.