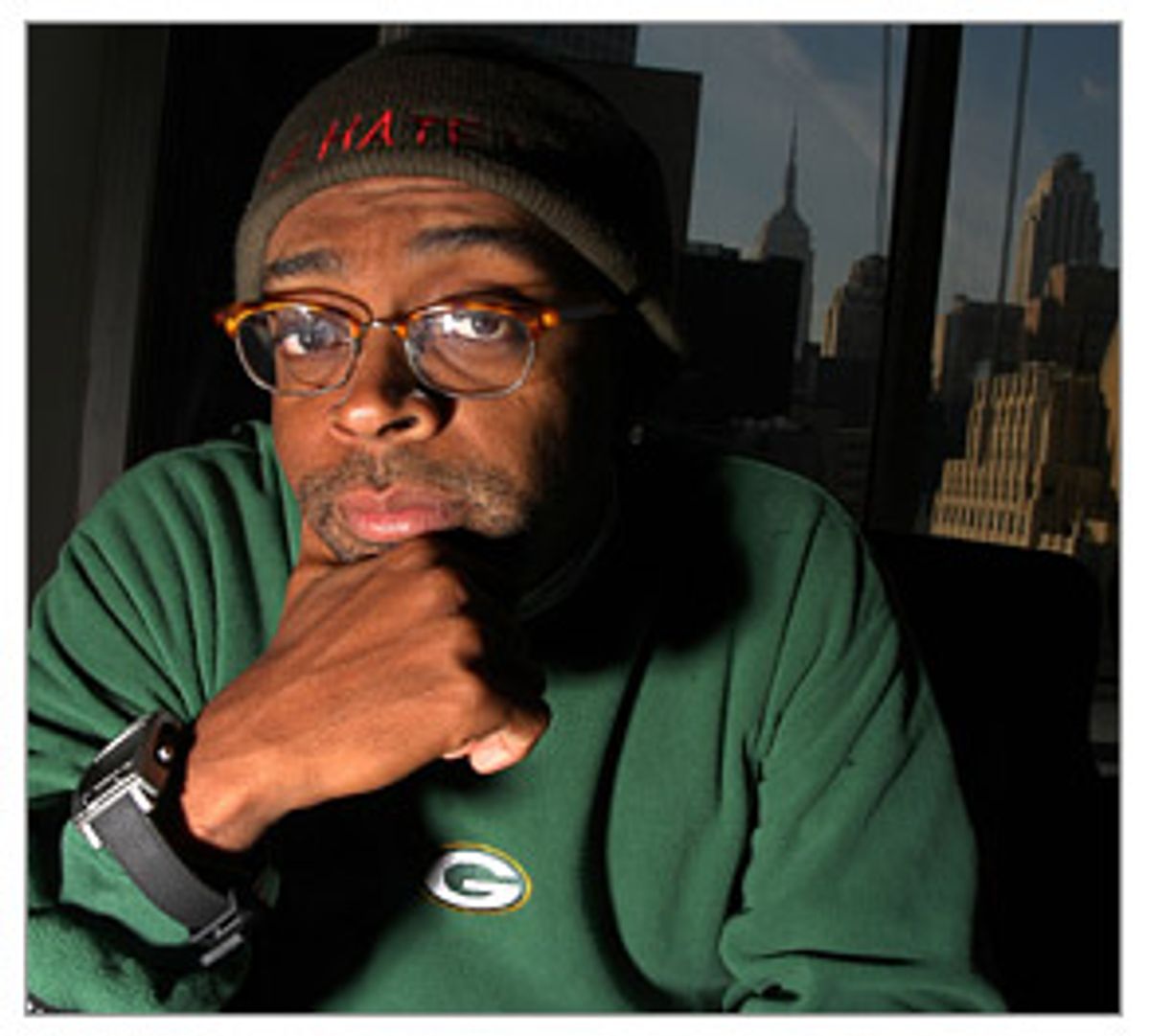 Spike Lee and I have had a contentious relationship. In the years between our first meeting at an early screening of "She's Gotta Have It" in the mid-'80s, and going in on an ill-fated business venture together in the mid-'90s, we ran into each other at parties and on street corners, at which point I pretty consistently gave him a piece of my newly Ivy League-educated mind. I found "School Daze" sexist, "Jungle Fever" exploitative, "Girl Six" a departure, and so on. Lee never asked for my opinion, mind you. Flashing the impish smile of a provocateur, he seemed to enjoy my unsolicited comments, the more critical the better.

When we reconnected after a few years at a recent New York screening of his new film, "She Hate Me," we had both mellowed. I had left my arrogant, critical-to-the-point-of-alienation persona back in the '90s where it belonged, and he was shepherding yet another of his celluloid children into the world. I was happy to see him and, because of my interest in the changing face of contemporary masculinity, intrigued by the premise of the movie, which goes a little something like this: Jack Armstrong, a highly paid executive at a pharmaceutical company, is fired for blowing the whistle on his boss' wrongdoings. Broke and shut out of the conventional economy, he accepts an offer from his ex-girlfriend, Fatima, to impregnate lesbians at $10,000 a pop. Mayhem ensues, resulting in, among other things, Jack fathering 19 children. With Kerry Washington, Q-Tip and Bai Ling in the cast, and the inimitable sex guru Tristan Taormino behind the scenes as the "lesbian technical consultant," who could resist?

Many reviewers have been harsh, and the film has been denounced by several prominent black lesbians, but I found "She Hate Me" fascinating and entertaining. As a bisexual woman, I had a few mixed feelings about the way lesbians are portrayed and many more about Jack's ambivalence about his role as a daddy donor, but ultimately think, again, Lee has pushed some of the hottest buttons in the culture and asked some critical questions about what it means to be a man in America today. What happens to the men who can't stomach corporate America because their own integrity won't allow it? What happens to them when the feminine "soft landing" that used to be there with support and love in times of duress is as cold and opportunistic as the men back at the office? What happens when men are objectified by women who only need them for the sexual pleasure and sperm they can provide? And perhaps most pressing, on what basis can men cultivate intimacy when the external configurations, like traditional marriage and implicit heterosexuality, seem to be in a state of open-ended flux?

Of course, I had to talk to Lee about the film, only this time, I had a tape recorder. He called me in San Francisco from New York, where he was busy doing press for the film.

Let's start with the title, "She Hate Me." Who is hating who?

Rod Smart, a football player, came up with his own nickname, "He Hate Me." And in my estimate that's one of the greatest nicknames of all times. "She Hate Me" is a play on that.

I still don't get it. Who hates Rod Smart?

Do you think a lot of men feel hated by women?

No, well, I don't feel that way. I don't know any men that say women hate them. Nobody I hang with.

Jack doesn't hate women. He just has a problem with this one woman he loves.

I'm saying he thinks Fatima, his ex who turns into his pimp, does, not all women.

Do you think that Jack is, on some level, you? Blacklisted from corporate Hollywood for making challenging movies ...

And also objectified by women for what you can provide for them? You know, money, possible paternity, fame.

First of all, I'm not a businessman, I didn't go to Harvard undergrad, I didn't get an MBA from Wharton and I don't really think I've been shut down. I made 18 films in 18 years. And I like the underdog role. That's the way I came in. As the underdog, you just grab the key, whale away, keep fighting. It's a challenge every time you go out there. This has been very much a part of the African-American experience in this country. No matter who we are, we've always had to make due with what we got. Remember, I made "She's Gotta Have It" with $175,000.

But don't you think what's also true to the African-American male experience is that black men are often kept out of the highest levels of power and objectified for their physicality and athleticism, their ability to work and breed? I think that you're touching on a theme that is much bigger than just Jack.

Well, a lot of people point out, which is true, they say, "Spike, if you were going to be in this film, you would have played the part that Q-Tip played." That's the usual role I play in my movies.

And how would you describe the Q-Tip character?

He's just plodding along. I remember in high school, I was a virgin, and my friend Larry Tucker, this guy did everybody. We were best friends and one of our other friends worked at a drugstore and got free prophylactics and gave me a box. And Larry said, "Why you? Give me that, you don't need these." (laughs) And I go, "Yes I do, yes I do!" (laughs)

But then Jack could be a projection of a fantasy, which is what so many people, especially the women at the NYC screening I attended, are saying.

What I like to say to people when they say, "This is Spike's fantasy, or this is a male's fantasy," is that it is, up to a point, but then it turns to a nightmare.

At what point is that?

When Jack starts to realize what he's doing. I mean, there's a ton of money in his hands and he throws it down in disgust. He is worn out. Mentally, physically, spiritually. He's thinking, if I never see another piece of you know what, I'd be happy. The sperm animation is there for a reason. It's not just there to be funny. He's spent.

Not me. First of all, when I was growing up there weren't even videotapes, so where was I going to watch? VCRs didn't even exist.

So you haven't watched a lot of pornography in your life?

At the end he's with two women.

Yeah, but he doesn't have sex with them.

You don't see it.

It's not that it would have to be explicitly pornographic, it's the idea of what the straight male fantasy is, of being able to have access to even those women who don't desire you sexually, two of them.

And once Jack really understands what it means to be led by one's fantasy, he has to change.

He has to. It is a cliché, be careful what you think, be careful what you ask for. Fatima's smart. She knows that she's gonna get him hooked in the scheme. The first woman she brings to Jack cannot be a dyke. She's gonna bring the finest, best-dressed looking lesbians she can get. And then she has him hooked. So then he thinks they're all gonna be like that. And that's when Fatima switches gears.

So you're saying that she uses the pornographic against him, she hooks him through his own susceptibility to the fantasy.

Anthony Mackie, the actor who plays Jack, said in an interview that he feels that his character grows in his masculinity to realizing that love is more important than any family configuration. Was that one of the things that you were trying to say?

At the end, Jack redefines, repositions and recalibrates his moral compass. He realizes what he has done and says, I gotta be a father to at least two of these kids, and a partner to the two people I really care about, especially Fatima, a woman I was engaged to. I think what the film does for me at the end is pose a possibility of a new configuration of the American family. It's ever changing and evolving.

And you are supportive of that new configuration?

Even though the film seems ambivalent about what Jack is doing?

Well, I think that the film is even and that we really let the audience decide what they feel about it.

But Jack is clearly apologetic for what he does. He keeps saying that what he did is wrong.

Yeah, but here's the thing. It's not because the women are lesbians; that's where people get tripped up. It's the fact that even if the women were heterosexual, he's brought 19 kids into this world. That eats him; he feels like he prostituted himself.

Do you have ambivalence about men selling their sperm to women who want to have babies?

Nah, I mean if that's what you want to do. I wouldn't do it.

There's no condition under which you would sell or give your sperm to a woman who really wanted a child?

I'm married, happily married with two kids. I'm not gonna have any kids outside my marriage.

What if someone you loved really, really, really wanted a baby, and they felt that you were the only one they trusted. You don't think you could do that?

Does that come out of a Christian-based morality?

No. I just won't do it. I ain't having no kids that I'm not bringing up. They can get somebody else. And I know a lot of guys who would do it.

Were you thinking about those guys when you made the film, the guys who are making different choices about what it means to be a man?

Well, I think many American men are reevaluating the models their fathers provided and are coming to different conclusions about how they want to live as men.

What, this is a trend? I didn't hear about this. I missed that one.

Yeah, where have you been? You haven't been watching the movies, they are all about new masculinity, from "The Hulk" to "Jersey Girl," "The Stepford Wives" to "Daddy Day Care," even "Breakin' All the Rules." And don't forget "Gigli."

Oh, I missed that one.

"Gigli" is a very interesting film in terms of gender dynamics. A straight man is seduced by a Buddhism-reading, yoga-doing lesbian, and then decides to drop out of the mob to try to find a more "pure and clean place to be." I don't believe we've seen that story before.

Well, what I think a lot of men are realizing is that the stuff we've been taught doesn't amount to a hill of beans. Men can't cry, men can't show emotion, that kinda stuff, you know? All those mantras about what a real man can do and what they shouldn't do. It's bogus.

Well, were you thinking about that while you were making the film?

Well, what were you thinking about?

Some have labeled the film anti-Bush. Is the film also an attack on the president?

Well, I don't think showing a $3 bill with him and an Enron watermark on it is an endorsement of him, that's for sure.

Yeah, what was the thinking behind that?

You never head that saying, "Bogus like a $3 bill?"

No, actually, I haven't.

Go to any store and try to spend a $3 bill, see what happens. He lied to the world. This whole weapons of mass destruction thing, that's just the beginning.

Can you see yourself making a film that answers more questions than it asks?

Rebecca Walker is the author of "Black, White and Jewish: Autobiography of a Shifting Self" and the recently published "What Makes a Man: 22 Writers Imagine the Future." She can be reached at www.rebeccawalker.com.