How I got out of the shrine alive

Salon's Phillip Robertson talks about his harrowing ordeal inside the Imam Ali shrine in war-ravaged Najaf. 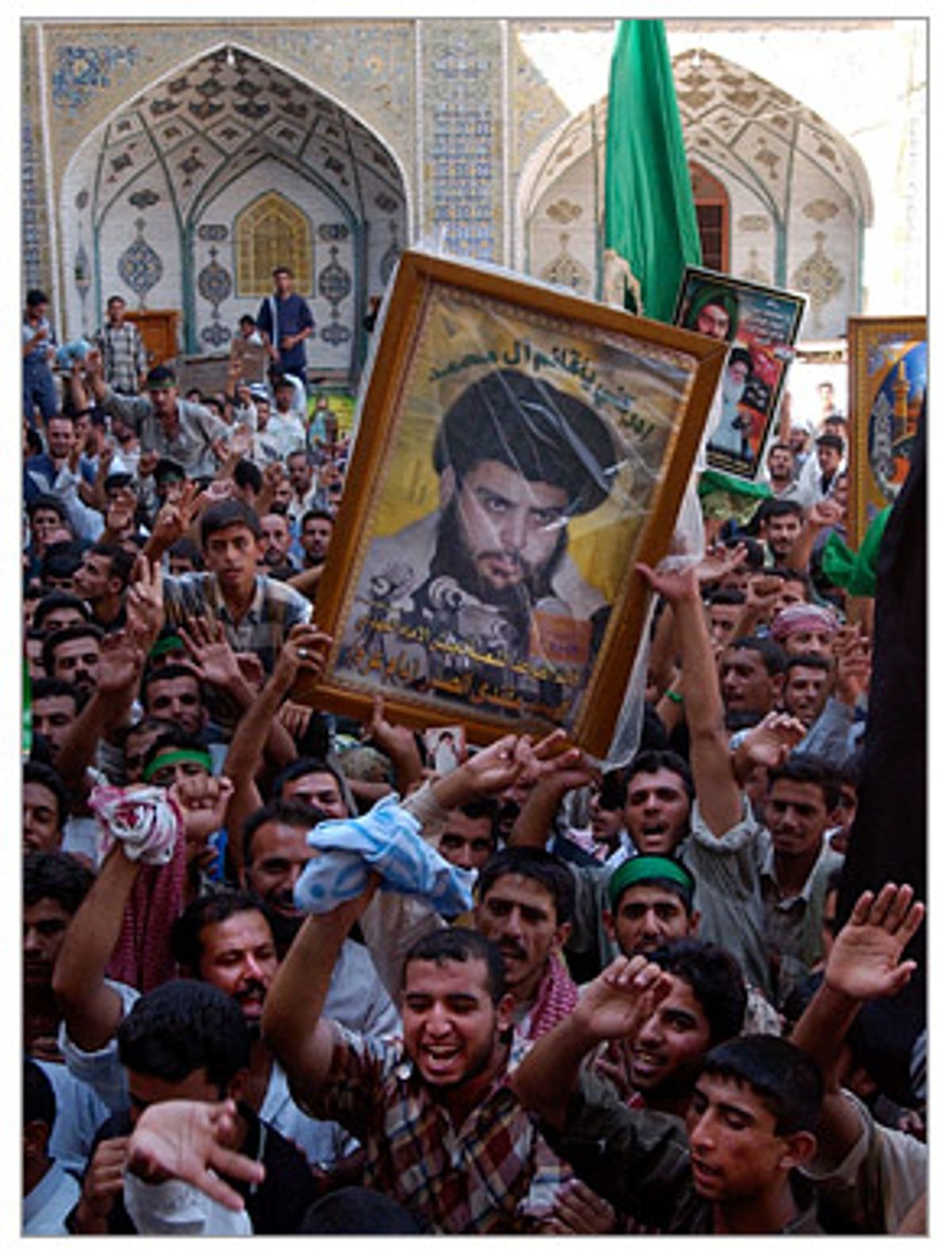 For three days, Salon correspondent Phillip Robertson and photographer Thorne Anderson were the only journalists inside the Imam Ali shrine in Najaf, Iraq, where up to 2,500 militia men faithful to cleric Muqtada al-Sadr were locked in battle with U.S. forces. On Thursday afternoon, Robertson managed to return to Baghdad, and soon called home to tell us about his nerve-wracking experience, how he got out -- and why the widely reported peace deal never really existed.

The shrine is essentially a place of refuge. There are spontaneous demonstrations, there's lots of chanting and singing in support of Sadr, an atmosphere of religious fervor. But otherwise it felt calm inside. Outside, however, the Mahdi fighters are still armed and are still fighting. It was confusing to me that this peace deal was given an enormous amount of press when you could consistently hear explosions near the roof and the walls of the shrine. There is no peace deal or cease-fire. They're still fighting. There was a real lull for a little while, but then it picked up again yesterday. On Wednesday morning, we were in the hospital of the mosque, and there was a huge explosion. It sounded like a mortar or other explosive had hit the roof. There was a crash and then a bunch of debris on the interior courtyard, bits and pieces of mosque tile. We heard the clatter of a piece of metal and went to look. The markings on it appeared to be the serial number code from an American manufacturer. It appeared to be an American munition of some type.

How did you finally get out?

All the journalists had been bottled up inside the Sea of Najaf Hotel just outside the American cordon. Photographer Thorne Anderson and I were the only Western journalists able to go inside. But later a small group of journalists from the Christian Science Monitor, the Independent and some of the Arab news channels organized a convoy to drive in and get us. They got an informal agreement with the U.S. military not to shoot at them as they drove in. Initially there were 16 cars in the convoy, but I think only seven of them made it in. I wasn't really worried about the fighting when we were heading out in the convoy.

I was much more nervous yesterday when there was a general mobilization order inside the shrine and I thought an American attack would come. I felt like a bug in a box in there. It was a very strange feeling because there was intense psychological pressure. But the men were actually very kind to us. We were fed and protected.

Why do you think you were welcomed?

Shortly before we arrived in the area on Monday, there was an order banning journalists from being inside the exclusion zone inside Najaf, and all of the journalists were evicted from the Sea of Najaf Hotel by the Iraqi police. So for a brief interval there were no journalists there and I think that made us really attractive to the Mahdi leaders at that moment. They were saying, "You see? Who's the real enemy of democracy? What kind of freedom is this to kick all the journalists out? That's not freedom of speech." So they were glad to take us in.

When we first met with the Mahdi Army contacts inside the Kufa Mosque on Monday, they said the biggest danger in Najaf was the Iraqi police because they would shoot at anybody. I'd heard similar things from other journalists, that the Iraqi police were just driving around shooting the place up.

What was your perception of the fighting from inside the shrine?

The Mahdi Army is engaged in a constant battle with U.S. forces. I didn't see any Iraqi forces. From my two trajectories in and out of the shrine, it was clear they're fighting the Americans.

After a brief lull on Wednesday, there was continuous fighting again Thursday, though maybe not as intense as earlier in the week. And there have been a lot of air strikes. On Tuesday a building on the same corner as Muqtada al-Sadr's main office -- his office is not inside the shrine but in a corner across the street -- there was the sound of an aircraft and just a huge shattering explosion. I didn't see the blast itself because I was inside the shrine, but I ran outside and saw that a big chunk of the building was missing and several cars were on fire.

In the three days I was there, I witnessed the most horrific casualties I've ever seen in my life. I saw men carried into the infirmary in pieces. I witnessed more than 20 funerals. The U.S. forces are killing and wounding a lot of Mahdi fighters. These guys are going into a meat grinder and they're getting torn up. It was horrible to watch. It was like a machine. You would see the fighters go out and go running down the street, and then you'd hear a boom, and they would come back being carried on blood-soaked carts. I witnessed an amputation. I saw one man -- what was left of him -- taken to the hospital and pronounced dead on the scene.

Based on what you saw inside, what's your view of the reported cease-fire? Is a real truce forthcoming?

I'm not optimistic about the peace process at all. I think it's gotten overreported. Yesterday around 6 p.m. we heard two announcements over the mosque loudspeakers, an emergency mobilization order sending all fighters to their fighting positions -- this was after the news of the potential truce had been announced.

I don't get the sense the Allawi government can do much to influence Muqtada al-Sadr. But it's very odd: Sadr was reportedly in Najaf, but he wasn't around the shrine at all during the last three days.

Did you have any idea where Sadr was?

No. His location is a closely guarded secret. It's the one question you do not ask the Mahdi soldiers.

Were you able to talk to any of the Mahdi Army leadership? What were they saying about the truce?

Last night and today I did talk with a Mahdi leader, Sheikh Ahmed Shibany. He's one of Sadr's spokesmen, probably fourth or fifth down the organizational chain. It's a very small inner circle. He only would say that Sadr had sent a letter to the Iraqi government offering to lay down arms, vacate the shrine and become a political party. He said they were waiting for communication from the Iraqi government that they would agree to withdraw their forces to the original combat lines outside the medina.

Shibany is a very well-educated man, but it was really hard to get a clear response from him. I asked him repeatedly about the status of the negotiations -- Was he optimistic? Did he think they would fail? -- but he consistently responded in a vague and very robotic way. He said, "We made the offer but we don't trust the Americans." I was around him for the last three days and we were on good terms but he would never go beyond that discussion of the letter. When I would ask him, "What's going to happen tomorrow?" he would say "There could be intense fighting or there could be peace. I don't know."

What did you hear from the fighters themselves? Did any of them indicate they would lay down their arms and vacate the shrine?

The fighters don't know anything about a peace deal. I asked some of them if they would put down their arms if Sadr told them to, and they said, "Absolutely, he's the leader." But there's been no sign of that. A lot of fighters kept asking me, "Why does America hate poor people so much?" That was a common refrain.

I asked Shibany if there had been any cease-fire order given and he told me, "We only fire when we're fired upon." But that's not true. They do fire at American forces. They were fighting American forces this morning and this afternoon, and they'll be fighting tonight and tomorrow. My sense is there was never a cease-fire order given. That could change, but as of 4:30 Thursday afternoon, there were outgoing mortars -- not from the shrine itself but from buildings nearby. The fighting was continuing in the medina, and in the cemetery, which adjoins the mosque.

What has the rest of the media missed about this conflict?

I think a lot of the reporting on the Mahdi Army has been inaccurate -- and when I say that, I'm not endorsing the army, I'm just saying I think they've been really misunderstood. In some big publications they've been referred to as "rabble" or a "ragtag" group of fighters, and that's way off. They are guerrilla fighters, yes, but they are extremely disciplined and they are not ill-educated. A large majority of the cell leaders have college educations, usually with some kind of scientific or engineering training.

There was a lot made of this truce and they may still pull some kind of peace deal out of a hat. In Baghdad, you can get in a car and go into the Green Zone and cover whatever the Iraqi government is talking about; that's easy enough to do. I do think Sadr's peace offer in a letter exists. But I'm not optimistic. I don't think this peace is for real. The United States, which is the real power here, wants to disarm and destroy Muqtada al-Sadr. And they've already destroyed a chunk of Najaf.

Read the rest of Phillip Robertson's dispatches from the front lines in Iraq here.