Stephen Fry takes a few liberties, but ultimately does Evelyn Waugh justice with this deliciously dazzling adaptation of the gleefully naughty "Vile Bodies." 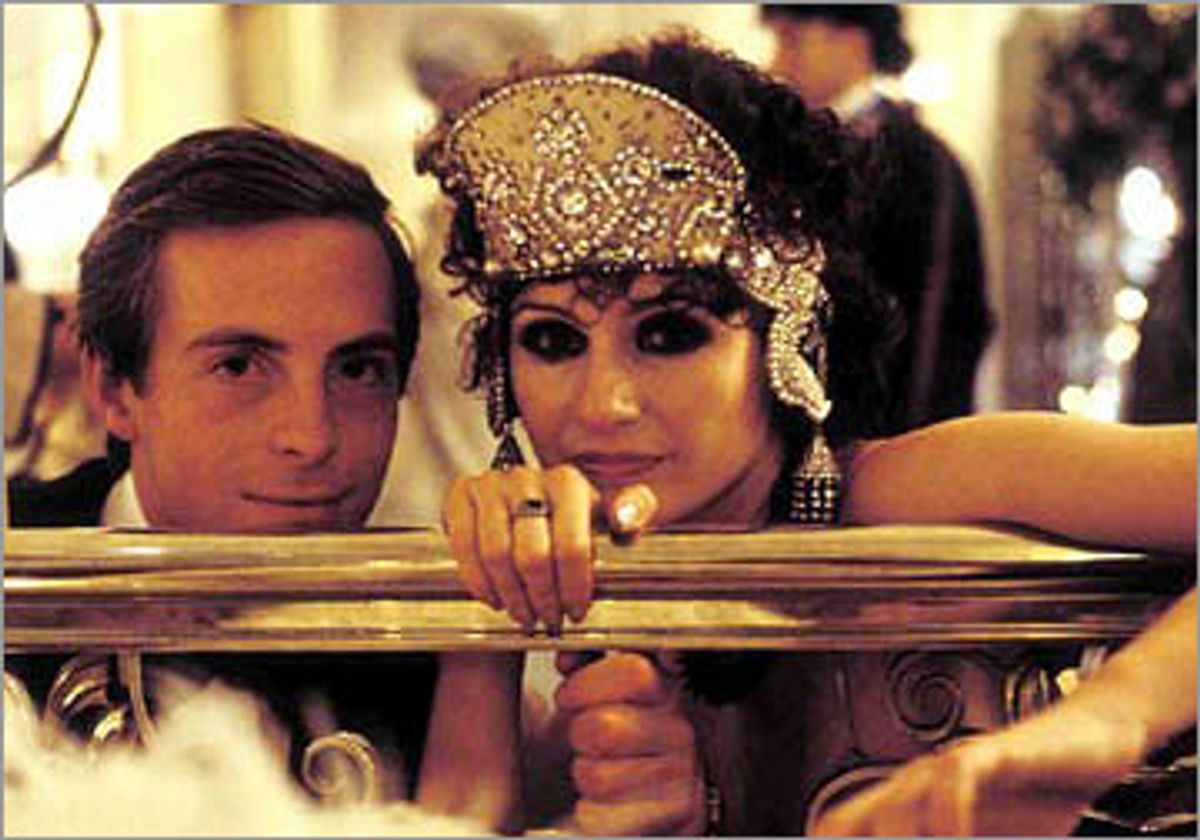 Stephen Fry's "Bright Young Things," adapted from Evelyn Waugh's gleeful, running-with-scissors 1930 satirical novel "Vile Bodies," perfectly and admirably captures the spirit of Waugh -- except when it doesn't. Waugh set "Vile Bodies" in England, in an imaginary near-future that shares many characteristics with the real 1920s. Most notably, it's populated by a set of "bright young people" who fill their days with one chief activity: staving off boredom, a state of mind they fear more than poverty (particularly because most of them don't have to fear poverty at all).

To call "Vile Bodies" a satire or a social commentary is to pin the handiest one-size-fits-all tag on it. While it is elegant and snickeringly hilarious (it's dotted with characters like "Lord Circumference" and "Fanny Throbbing," their names alone like fat dollops of kitty-cat cream), Waugh's sharpest darts are his invisible ones. He comments on bad behavior without ever stooping to do anything so gauchely obvious as actually comment. Everything the characters do is light and tossed off and often morally deplorable: They don't have epiphanies, only parties. As shallow and sometimes unlikable as they are, though, we find ourselves wanting to be around them right through to the end of the book. That's the ultimate test of their social magnetism: We're real, they're fictional, and still, we'd like to hang around them, if only they'd have us. How twisted is that?

Fry's "Bright Young Things" so adeptly captures the insidious likability of Waugh's characters, particularly in the movie's first two-thirds, that we're primed to forgive it for the way, in the end, it grinds home the moral messages that Waugh only nodded at (without bothering to raise an eyebrow or even lower his newspaper, it seems). Fry's movie -- he also adapted the screenplay -- is set in the 1930s, as opposed to Waugh's imagining of the 1930s, which was probably a choice made for convenience' sake more than anything else. (As a filmmaker, how do you adapt a novel set in an imaginary "near future" of the 1930s and pretend World War II isn't just around the corner? Better to acknowledge the course of history and be done with it. Besides that, Waugh's 1930 vision of the future was prescient enough -- he ends "Vile Bodies" with the beginning of a war.)

The story's central character is Adam Fenwick-Symes (Stephen Campbell Moore), a bright but penniless author who's scrambling to pick up enough money to marry his beloved Nina Blount (Emily Mortimer), who's considerably above his station but who seems to genuinely care for him nonetheless. To marry Nina, Adam figures he needs at least £1,000, an amount he wins easily in one evening of casual gambling and just as easily loses again -- he spends the rest of the story trying to get it back. Meanwhile, he goes to parties, lots of parties: Nina's set does little but spin from one social event to the next, many of them costume affairs keyed to outlandish themes or settings.

Nina sometimes comes off as careless with Adam's affections, but then, she's careless about everything. After they finally spend a night in bed together, she assesses the experience dismissively. ("For physical pleasure I'd sooner go to my dentist anyday.") But secretly, the sleeping-together business grows on her, and she does care for Adam. In a desperate attempt to make some money and thus hasten the wedding, Adam avails himself of an offer to become a society reporter. Instead of snorting around for cheap gossip, he and Nina put their heads together and make it up, which is far more convenient.

Fry understands both the lightness and directness of Waugh's humor, and he sends the jokes whizzing in the first scene. The movie opens at a raging party set in the glamorous pits of hell (cinematographer Henry Braham paints it for us in glorious swirls of red). Two partygoers shimmy and shake wildly without allowing their idle conversation to break stride: "Isn't this too dull?" "I've never been so bored in my life."

Fry realizes that the actors are the party in "Bright Young Things," and he's cast them perfectly. Adam may be the hardest type of character to play -- he has to be something of a likable drip -- but Moore pulls it off beautifully: He understands that his character needs to be a stylized cartoon sketch, but one with feelings. And Mortimer, with her society-girl profile and tousle of dark curls, gives Nina just the right measure of blasé fervidity. Mortimer also has one of the most seductive voices of any actress working today -- it's a throaty rasp that's saucily erotic, like a perfumey cloud of smoke filtered through a pastel Bakelite cigarette holder.

The ensemble swirling around Adam and Nina includes Simon Callow as the exiled King of Anatolia (who has an outlandishly eloquent speech about a lost gold fountain pen with eagles on it, which he misses far more than his kingdom), Jim Broadbent as a sozzled Army major and Peter O'Toole as Nina's dottily matter-of-fact father. (When Adam treks to his country estate to ask old Col. Blount for money with which to marry Nina, Blount greets him with the words, "Come about the vacuum cleaner, have you," uttered as a statement and not a question, as if the only truths worth brooking were those already fully formed in his imagination.)

But the movie's most fabulous character is Agatha Runcible, played by a superb actress with the deliciously Waughian name of Fenella Woolgar. Agatha is a game society gal who, post-costume party, flounces into the prime minister's study dressed as an exotic dancing girl -- "How shy-making!" she remarks -- and later appears at a motor race clad in trousers and a necktie. Woolgar has one of those captivating, longish faces that actually benefits from not being particularly pretty -- she's all about animation and expression. As Agatha, with her blond bob and googly eyes, she's like a Katzenjammer Modigliani -- a creature whose biggest mystery is her ability to maintain, with barely a pause for breath, a sense of giggly delight.

In both Waugh's novel and Fry's movie, Agatha isn't invincible. And Fry's handling of her plight is just one of the missteps he takes with the movie's tone. You can't be too hard on Fry: Waugh's attitude toward his characters isn't cold, but his treatment of them sometimes is, and that tricky balance can be hard to convey to a movie audience, particularly a modern one. There are several places where Fry underlines Waugh's themes in bold red ink. For example, he takes a grand, revelatory speech about the whirl of decadent, whimsically themed parties writhing with "vile bodies" and puts it into the mouth of one of the characters. In the book, it's a hippety-hopping parenthetical -- Waugh's very direct way of saying, "If you read this as a scathing indictment, that's your choice."

Fry also loses control of the movie's ending: It's too buttoned-up, and too conventionally happy, to suit the wily dryness of Waugh's characters. But still, you walk away from "Bright Young Things" believing that, by and large, Fry has gotten Waugh as well as any filmmaker could be expected to. Significantly, he hasn't brushed "Vile Bodies" with that gloopy, dishearteningly tasteful "Masterpiece Theatre" glaze; in its best moments, "Bright Young Things" is as lithe and as wicked as its source material. Depending on how much of a Waugh purist you are, its flaws may trouble you as you're watching it. But afterward, they might not matter so much. "Bright Young Things" leaves the bright, silky shimmer of lamé in its wake. It's so dazzling, you forget to have a hangover.