Triumph of the W.

Trying to counter the success of Michael Moore, Karl Rove's men in Hollywood are rushing to release a pro-Bush epic, "The Big Picture." But are they violating federal campaign law? 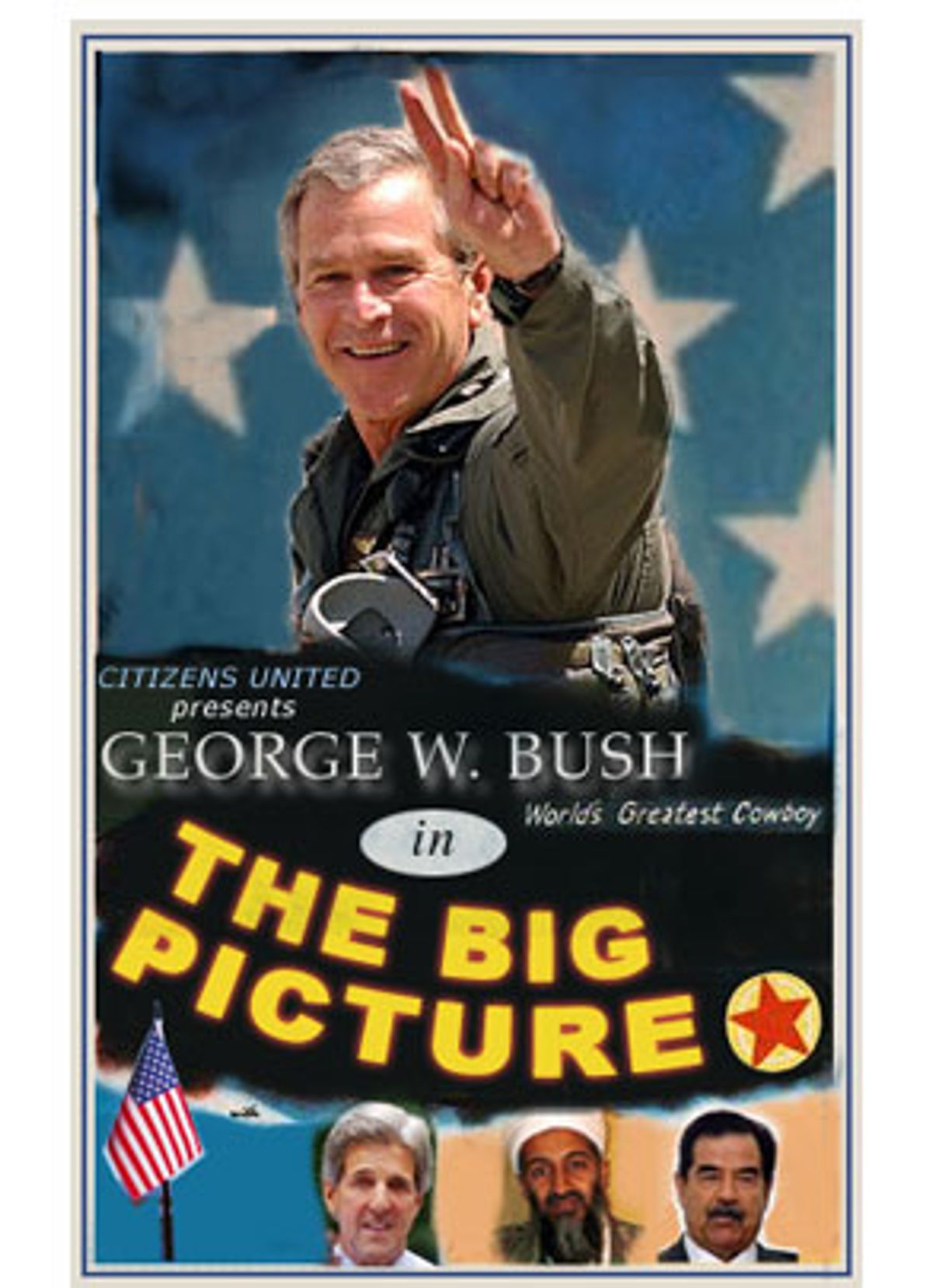 The next salvo in the cinematic campaign war of 2004 is "The Big Picture," a documentary film attacking John Kerry sponsored by David Bossie's Citizens United, the right-wing group that unsuccessfully sued to stop national advertising of Michael Moore's "Fahrenheit 9/11." But Bossie's latest project could create legal problems for him and his organization -- in part because Lionel Chetwynd, the award-winning director, is working not only on the documentary but also on two shorter films to be screened at the Republican National Convention.

The director's simultaneous involvement in both the convention films and the Bossie documentary raises eyebrows among campaign finance experts, because Citizens United is a tax-exempt foundation legally restricted from "coordinating" its "independent" political broadcasts or messages with the Bush-Cheney campaign or the Republican National Committee. If Chetwynd, Bossie, or anyone else working on "The Big Picture" discussed that project with RNC officials or the Bush-Cheney reelection committee, they could be violating the law.

"This kind of common vendor arrangement would raise serious questions about whether the law's coordination restrictions are being complied with," said Fred Wertheimer, president of Democracy 21, a nonpartisan organization that advocates stronger enforcement of the campaign finance laws. "That is a factual question that has to be determined by the appropriate enforcement authorities."

The mere hiring of Chetwynd to work on both projects may be enough to spark an official probe, says Trevor Potter, a former Federal Election Commission member. "Given the facts here, there's certainly enough for somebody to file a complaint with the FEC alleging impermissible contributions, expenditures or coordination," Potter said. "Whether an investigation would bear out that complaint, it would focus on whether there was coordination between the RNC and the filmmaker on the [Citizens United] film." But Potter, who practices election law in Washington, also pointed out that the FEC rules are sufficiently vague and permissive to allow a "common vendor" like Chetwynd to work for both the RNC and Citizens United under some circumstances.

An outline of the "The Big Picture" obtained by Salon suggests that the Citizens United documentary will offer not only a staunch defense of Bush but also an aggressive attack on Kerry, including a recitation of various smears having to do with his medal-winning military history put forward lately by the so-called Swift Boat Veterans for Truth. The outline portrays the Democratic nominee as the preferred candidate of such "foreign leaders" as Osama bin Laden, Kim Jong Il and the Nicaraguan Sandinista Party, and as an "appeaser" of European powers deemed corrupt and hostile to U.S. interests -- especially France. Virtually all the world's other nations are solidly behind Bush and the war in Iraq, according to the outline, which labors to disprove allegations that Bush "lied" about Saddam Hussein's weapons of mass destruction and ties to al-Qaida.

Chetwynd, widely known as one of the Bush administration's most fervent advocates in the movie industry, serves on the President's Committee on the Arts and Humanities. He also happens to be a friend of political strategist Karl Rove. Last year, Chetwynd directed Showtime's "DC 9/11: Time of Crisis," a semi-fictionalized docudrama about the White House response to the terrorist attacks (described in the Washington Post by reviewer Tom Shales as "primitive propaganda" and "a reelection campaign movie"). Now, while he toils on the Citizens United documentary at a studio in North Hollywood, he is also preparing two films to be screened at the Republican National Convention, according to Daily Variety. The first is a "tribute" to the late President Ronald Reagan, for whom Chetwynd once served as a speechwriter. The second is a "toast to George W. Bush."

Listed as the writer-director of "The Big Picture" on a staff list for the film obtained by Salon, Chetwynd failed to return calls seeking comments. So did Bossie and Craig Haffner, the CEO of Greystone Television, whose facilities are being used to produce "The Big Picture." The Aug. 3 staff list for the film shows the North Hollywood address and telephone numbers for Greystone, which has produced dozens of cable documentaries. The same list also gives contact information for executive producer Bossie and Citizens United vice president Michael Boos at their organization's offices in Washington, under the heading "Production -- East Coast."

Bossie, of course, has enjoyed a long and mostly successful career creating propaganda against Democrats. He and Floyd Brown, his mentor at Citizens United, lured dozens of Washington journalists into the Whitewater fiasco with unsubstantiated charges and misinterpreted documents. After the Republicans took over Congress, he moved into "investigative" posts on Capitol Hill, where he faithfully carried out the GOP leadership's policy of perpetually harassing the Clinton administration, with or without plausible evidence. In 1998, however, he overreached with the release of tapes of imprisoned former Clinton associate Webster Hubbell's remarks about Hillary Clinton. When it turned out that the tapes had been heavily edited to make them sound incriminating rather than innocent, Bossie was fired.

Hints of the Citizens United film project first emerged in early July, when Bossie warned what he and his organization would do if the Federal Election Commission dismissed their "Fahrenheit 9/11" complaint. "Citizens United becomes a documentary factory," he told the New York Post. "We'll make documentaries and we'll show ads for them. I'm in the production business ... I can put together a documentary very, very quickly."

Ironically, Bossie and Citizens United could find themselves facing the same legal questions they raised about "Fahrenheit 9/11," when they tried to stop TV advertising for the Moore opus. Their complaint to the FEC alleged that such ads constituted prohibited "electioneering communications" against Bush and violated federal restrictions on "soft money." Last month the FEC ruled in favor of the film's distributors because those ads appeared more than four months before the election, during a window when they were permissible.

But the Bossie film will be released within the 120-day pre-election period when such "independent" electioneering communications are prohibited, unless they fall under an exception carved out for commercial media endeavors. Unless "The Big Picture" is billed as a commercial movie intended to earn a profit, it could fall within the category of prohibited electioneering activity. And advertising for the pro-Bush documentary could pose the same questions raised by Citizens United about the promotion of Moore's film.

Even if the filmmakers behind "The Big Picture" have avoided any unlawful coordination with the RNC or the Bush-Cheney campaign, their movie may yet embarrass Bossie and Chetwynd's friends in the White House.

The structure of the film, assuming that it follows the outline obtained by Salon, will be a methodical and ham-handed refutation of the "Anybody but Bush" arguments attributed to Moore, from the issue of the "stolen" 2000 election to the debate over the failure to prevent the 9/11 attacks. The true villains in all those controversies, it claims, are Democrats Bill Clinton, Al Gore and, of course, John Kerry.

Among the familiar personalities mentioned as possibly appearing in the film are Solicitor General Ted Olson and his late wife Barbara; actor and former Sen. Fred Thompson, who has appeared in a previous Citizens United ad; syndicated columnist Charles Krauthammer; former CIA director James Woolsey; and Florida Rep. Porter Goss, recently nominated as the next CIA director. (A less familiar interview subject, apparently named Ivan Pedanski, is cited as a source on Iraq's disappearing weapons of mass destruction because he would say that the "stuff [is] buried in the ground in Syria.")

An earlier version of the script outline, titled "Initial Notes," promised a more vicious and possibly more comical film. Among the anti-Bush canards mentioned there but omitted from the later outline is that "Bush is a moron." It argues that the president cannot be both a moron and a "devious mastermind attempting to spread US hegemony worldwide" -- and claims that "Bush did well at Yale."

That version of the script indicated the film's second half would be devoted to "deconstructing John Kerry" -- beginning with the character assault mounted by the Swift Boat Veterans for Truth, and mocking him as the "Knight of the Woeful Countenance." It also makes the false assertion that Kerry "never went on to post-grad work" after Yale. (Researchers hired by Bossie presumably will discover that Kerry graduated from Boston College law school in 1976.)

Exactly how "The Big Picture" was financed, and how much it will cost, remain mysterious. A tantalizing clue, however, showed up in a July 19 post on the right-wing Free Republic Web site, where someone nicknamed Smogger sought guidance from fellow Freepers about a political donation:

"Who is Dave Bossie and Citizens United?" asked Smogger. "I just gave them $50 that they claim they are going to use to create a movie to praise the efforts of George Bush and to counter Farenheit 911 [sic]. They said they were trying to raise $500,000 in 30 days for this effort. I assume they got my number from the RNC.

"Anyone else receive this phone solicitation? It's so hard to keep track with GWB and RNC calling every other day. I tried to access the Citizens United website but it appears down. I hope I did the right thing."