The Swift boat ads have been exposed by the press as blatantly false, but that hasn't stopped the Bush machine from pushing them. Has Kerry figured out how to fight back against the lies and the lying liars who tell them? 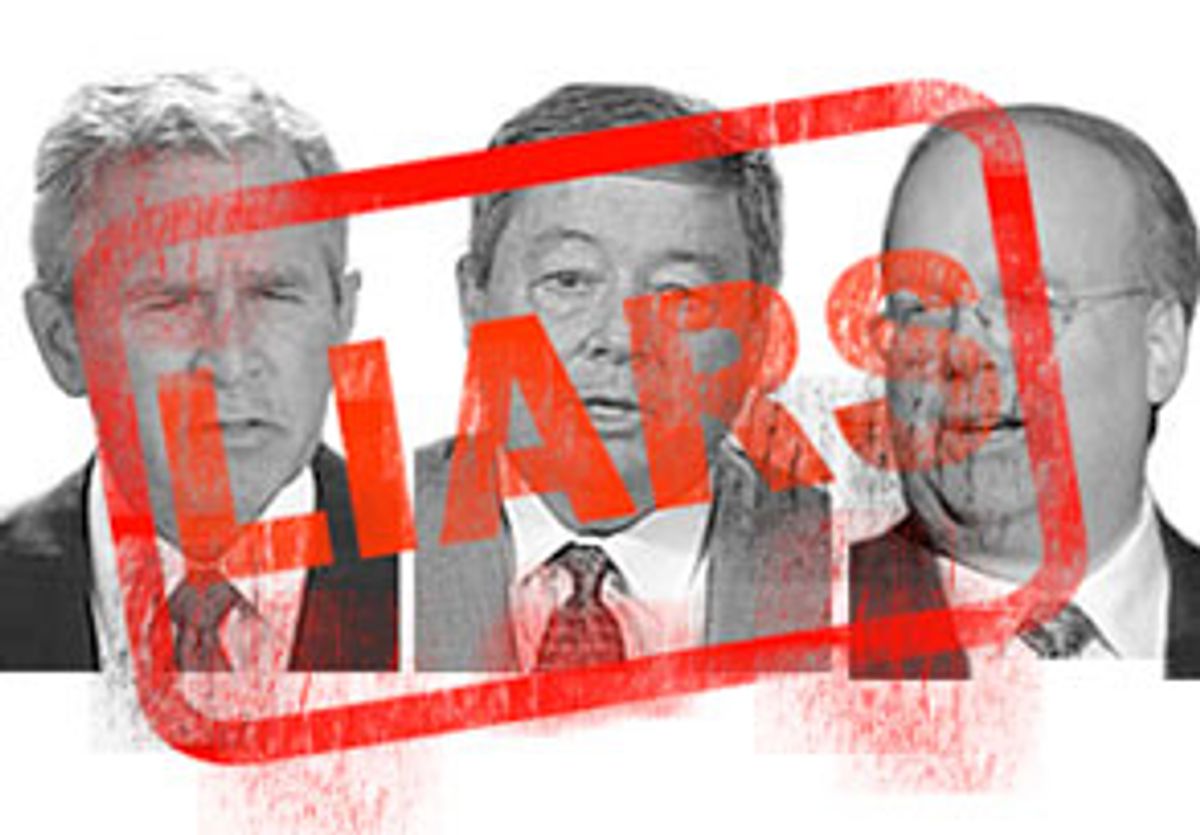 Speaking in New York on Tuesday morning, John Kerry said the Bush campaign and its political allies are using the "fear and smear" tactics of the Swift Boat Veterans for Truth in a "calculated effort" to evade serious debate on the issues facing America. A few hours later in Ohio, John Edwards railed against the president for failing to denounce the Swift Boat Veterans' ads. In between, the Kerry campaign arranged a conference call with reporters -- the second in two days -- to address the Swift Boat Veterans' attacks, then distributed comments from former Sen. Bob Kerrey, himself a decorated Vietnam veteran, condemning the attacks.

After taking flak for not responding quickly enough to the Swift Boat Veterans, the Kerry campaign now seems determined to talk the problem away. On the conference call with reporters Tuesday afternoon, Democratic Rep. Jim Turner said it's time to "get beyond" the Swift Boat Veterans' attacks and to start "talking about the real issues that matter to the American people." He then introduced reporters to yet another pro-Kerry Swift boater -- just how many of these guys were there? -- who proceeded to offer his own insights into the allegations made by the Swift Boat Veterans for Truth.

The Swift Boat Veterans' charges have largely been debunked. Reporters at the Los Angeles Times and the New York Times have both dismantled the allegations; on Tuesday morning, an L.A. Times editorial declared: "These charges against John Kerry are false. Or at least there is no good evidence that they are true."

But in the non-condemnation condemnations of the president, in the slippery "If so many people say something it must be true" logic of former Sen. Bob Dole, in the echoes that bounce back and forth between Rush Limbaugh and Fox News and spill over onto CNN, the allegations against Kerry have taken hold. Even if they're not true -- and by all credible accounts, they're not -- the allegations raise doubts in the minds of voters paying just enough attention to know that there's some "question" about Kerry's war record.

The Kerry campaign clearly sees some advantage in keeping the issue alive -- in further debunking the charges, in tying them ever tighter to George Bush and Karl Rove -- but Democratic strategists are increasingly concerned. "Even if you're winning on points now, I'm not sure strategically this is getting you where you want to go," said Paul Maslin, a veteran strategist and pollster who worked for Howard Dean's campaign. The key for Democrats is to stay focused on Bush's record in office, Maslin said. "Every week that you don't do that, you let Bush creep back into this thing a little bit."

In his speech at New York's Cooper Union Tuesday, Kerry tried to focus on Bush's record on the economy, on jobs, on healthcare. But as he must have known it would, the press focused almost exclusively on Kerry's charge that the Bush administration was avoiding debate over these issues by engaging in the "tactics of fear and smear."

It's hard to change the subject, especially when you're still talking about it. Maslin said that Kerry should just stop responding to questions about the Swift Boat Veterans. The press will get tired of asking, and the focus will shift to the Republican Convention. While the Swift boat issue won't go away, it will at least slide off the front page.

That's one way to change take the storyline. But Steve McMahon, another former Dean advisor who is now handling advertising for the Media Fund, said he believes that Kerry should take a more direct approach. "If I were advising John Kerry, which I'm not, I'd say, 'Let's call Bush out. Let's challenge him to a debate.'" The subject: the military service records of John Kerry and George W. Bush.

When voters go to the polls in November, McMahon said, they won't be choosing between John Kerry and "Unfit for Command" author John O'Neill; they'll be choosing between Kerry and Bush. "The choice is between a guy who volunteered to serve, went to war, fought on the front line, took enemy fire, was highly decorated, and saved the life of at least one of the troops -- and a guy who did everything he could to avoid service, jumped over 500 people to get into the National Guard, didn't show up for service in Alabama, and can't prove he was there."

Like many other Democrats, McMahon is incredulous that -- in light of Bush's record -- Vietnam service is even an issue in the campaign. "It seems to me that the president has an awful lot of explaining to do, particularly because he can't produce a single person, he can't remember where he lived, he can't remember who he hug out with, the folks he went drinking with, the bars he hung out in, and we're expected to take seriously their allegations about how many bullets were flying one day in Vietnam?"

Wayne Slater isn't surprised at all. Slater, the veteran Dallas Morning News reporter who coauthored "Bush's Brain: How Karl Rove Made George W. Bush Presidential," said Tuesday that the Swift Boat Veterans attack was entirely predictable. Slater has watched Karl Rove work for nearly two decades, and he said the "mark of Rove" in a campaign is always the same: Aim nasty attacks right at your opponent's strength, but keep your own fingerprints off them.

It happened in Texas in 1994, when Karl Rove ran Bush's campaign against Gov. Ann Richards. Richards' strength, Slater said, was her reputation for tolerance and inclusiveness. Then somebody started rumors in conservative East Texas, whispers suggesting that Richards and some of her staff members were gay. Bush didn't make the accusation himself, of course, but one day a state senator serving as Bush's East Texas campaign chairman -- a politician who had worked previously with Rove -- told a newspaper reporter that Richards' appointment of "avowed homosexuals" might be a liability in her campaign for reelection. The rumors, suddenly on the record -- at least sort of -- become newspaper stories, and Bush won the race.

Six years later, with Bush and Rove facing a must-win Republican presidential primary in South Carolina, somebody started suggesting that Sen. John McCain's experience as a prisoner of war in Vietnam had left him mentally unstable. Again, it was an attack on the opponent's strength -- in McCain's case, his role as a war hero -- and again, Bush and Rove disavowed any involvement in the attacks. When McCain challenged Bush in a Republican debate, Bush said: " John, I believe that you served our country nobly."

Of course, that's almost exactly what Bush has said about John Kerry, even as a group with close ties to Rove and the Bush-Cheney campaign runs an advertisement making the opposite point. When Larry King asked Bush about the Swift Boat Veterans' ad earlier this month, Bush said that he believes Kerry performed "honorable service" in Vietnam.

Slater said that Kerry has learned a lesson from the losses suffered by Ann Richards and John McCain. "You do not ignore the attacks," Slater said. "Richards never responded, and with McCain the response was too muted and too late. The lesson here is that you should respond immediately and try to tag the Bush administration or the Bush campaign as the responsible party."

Kerry failed at the former -- by the time he responded to the Swift Boat Veterans' attacks, they had built up an almost unstoppable momentum -- but his campaign is working hard at the latter. Both the Kerry campaign and the press have called attention to links between the Bush campaign, Rove and the Swift Boat Veterans. What Kerry needs now, Slater said, is something concrete -- a note or phone record showing that Karl Rove orchestrated the Swift Boat Veterans' campaign from the White House. "But I'll bet you a million dollars that no one will ever find that," Slater predicted. "There's never ever any evidence that Rove or his candidate was directly involved."

If the Rove tactic is so successful, why haven't the Democrats emulated it? Why not round up men who served -- actually served -- in the Texas Air National Guard and have them appear in an ad questioning Bush's service? "It's a good idea," said MoveOn's Eli Pariser, and he actually sounded surprised by it. But then he stopped himself. "I think we're mostly going to focus on issue stuff, on Iraq, on the big places where Bush has failed."

Why not fight fire with fire? Why not push the "deserter" issue? Why not work harder to find witnesses who can talk about Bush's pre-sobriety past? "That's never been our approach," Pariser said. "We've been fighting fire with water, which is the truth to these allegations."

That's not to say anti-Bush forces always remain above the fray. Earlier this month, MoveOn nailed Bush with an ad that claimed he "used his father to get into the National Guard and when the chips were down went missing." But the ad was so strong Kerry felt compelled to repudiate it, a dignified position Bush has stubbornly refused to take on his camp's misleading Swift boat ads.

Slater acknowledged that Democrats have not been as successful at attacking as Republicans have, and McMahon agreed. "I think Democrats always naively believe that elections are going to be about issues, and Republicans understand that presidential elections are about character, and issues are relevant only to the extent that they provide a more complete context for a person's character," he said.

McMahon said it's time for the Democrats to turn that view around. By focusing on Bush's sketchy military service -- and his dissembling about it -- McMahon said the Democrats can "shine a light" on a whole series of Bush obfuscations, from the reasons for going to war in Iraq, to the costs of the war, to the effect of the tax cuts. But that requires going for the jugular in a way that the Democrats seldom do.

Maslin wonders why. "Is it because the Republicans have fewer hesitations about this kind of thing? That they have no scruples? That they have a willing news media that gives them the benefit of the doubt on this stuff? I don't know."

If Democrats were to press harder on Bush's military record, Maslin thinks it might backfire -- both because of the conservative media echo chamber, and because Bush has served for four years as commander in chief, effectively canceling out any perceived problem with his lack of service during Vietnam. But Maslin -- like the Kerry campaign, it seems -- doesn't think that kind of personal attack is necessary.

"We've got a record of four years of George W. Bush, and that's plenty," he said. "I don't think we're out there digging for some hideous thing, because we don't need it."