Mrs. Tony Soprano, Bebe Neuwirth and a horde of other New York women tell Bush to take a hike. 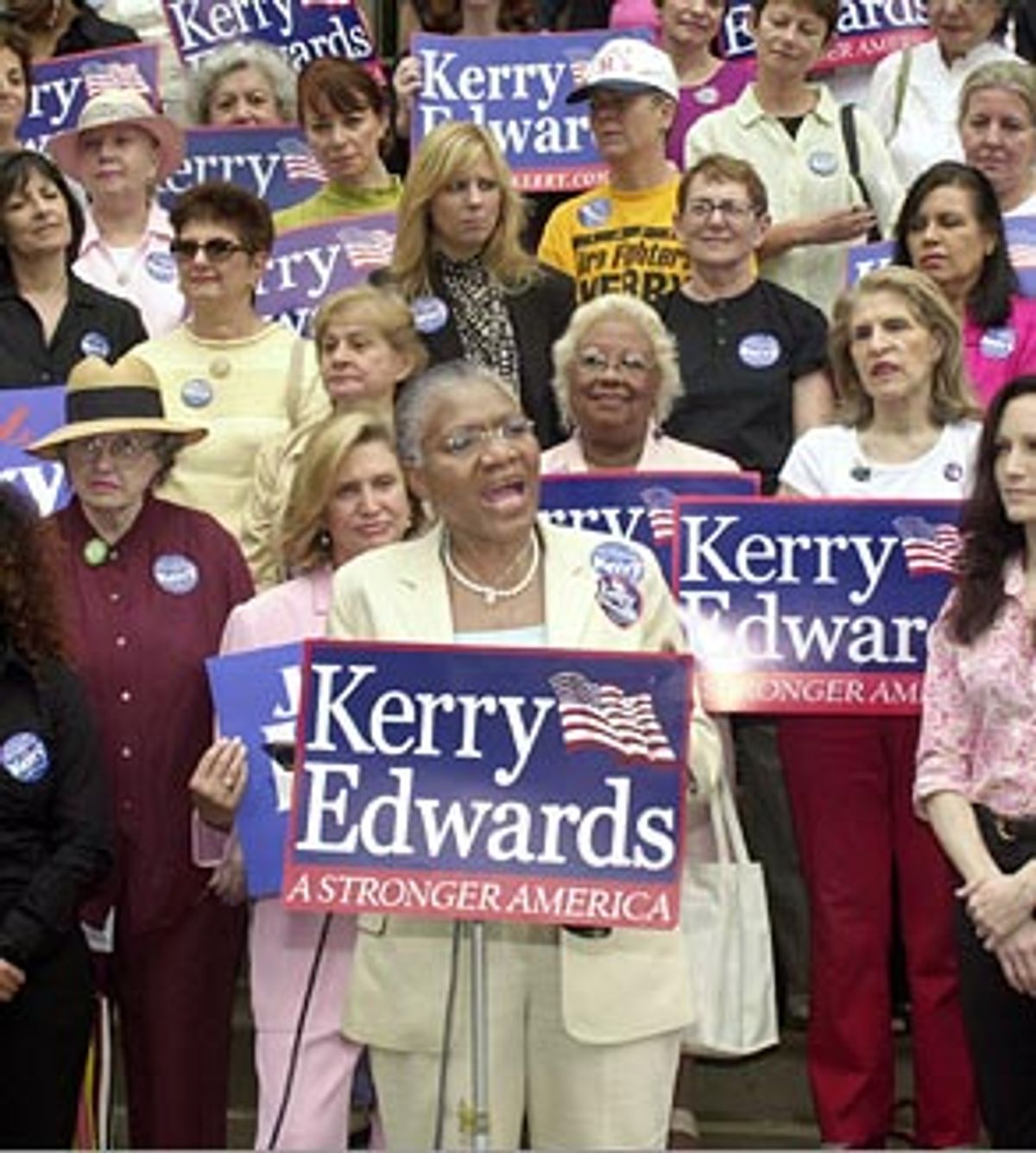 It's been unseasonably cool in New York this week. Days that are normally the city's worst have been free of the sidewalk stink of rotten milk, the sweaty misery of Easy-Bake Oven subway stations, the dirty drip of air conditioners. Instead we've had an early fall: bright days and cool sweater nights. But gorgeous crisp stretches like these have a foreboding edge. New Yorkers who've been here for more than three years will tell you that no matter how ridiculous it sounds, ever since the sharp blue morning of Sept. 11, 2001, days that begin this beautifully send apocalyptic shivers up their spines. So it seems a cruel joke that this little barometric blessing has been bestowed in a week in which the entire city is holding its collective breath. The weather is comfortable, but dangles the threat of imminent disaster: The Republicans are coming. And many New Yorkers are fleeing, draining out through bridges and tunnels. But a select few have decided to enjoy the weather here; to anchor themselves firmly to the cement, smile into the sun, and try to make themselves heard above whatever foul winds are about to blow in.

A lot of those New Yorkers are women.

This election year, women have been drawn on in highlighter and put under a black light. Their enfranchised desirability glows in the midst of murky tussles over Swift boats and Iraq. Both parties have repeated a statistic that is as clear as the recent weather -- 2 million single women did not vote in the 2000 presidential election -- until it's almost ceased to have meaning. Except for the women in question, who are now arm wrestling each other for control of the voting lever. This week, as the Republican National Committee gets ready to make its move on Gotham, a number of the week's scheduled events -- Democratic, Republican and just Pissed Off -- will look less like Tammany Hall-style politics of old than they will like bra burnings, Grrrl-Power raves or at least very special episodes of "Oprah."

The ladies will be among the first to kick things off, with the planned March For Women's Lives on Saturday, two days before the official convention begins, and 24 hours before United for Peace and Justice's planned march past Madison Square Garden. It's unlikely that Saturday's march, which will run across the Brooklyn Bridge and end with a rally at City Hall, will attract the nearly a million people that its sister march in Washington last April did. But fliers are encouragingly tacked up on every light post in Manhattan. Planned Parenthood has scheduled a "Stand Up for Choice" night on Monday, while the Republicans have a "W Is for Women" party later in the evening. Tuesday is "Compassion Day" on the convention floor, which means a speech from first lady Laura Bush, while on Wednesday, National Organization for Women president Kim Gandy will host a panel discussion and Miramax co-chairman Harvey Weinstein will co-host a party for Mothers Opposing Bush, or MOB. There are stroller brigades and Wicca gatherings and consciousness raisings and cocktail parties.

And on Thursday, standing in the beautiful sunshine, a neat tangle of about 70 women had gathered on the steps of City Hall to set the tone for the week ahead. Racially and sartorially, they represented just about every shade imaginable, though heavy on the pink on both fronts. Dressed in everything from suit jackets to peasant skirts, they rubbed bare arms against the wind, and wore big straw hats against the sun. Billed as a rally hosted by "Women for Kerry" the event was more of a press conference. It was kicked off by Manhattan borough president C. Virginia Fields, who addressed the knot of press who'd made it through the security scanners. Outside the City Hall gates, women in hot pink Statue of Liberty crowns held signs that said, "Dissent Is Patriotic."

Like I said, there's been an odd vibe in the city this week.

Fields, a dynamic speaker and reliably funny lady, began by noting that Aug. 26 was Women's Equality Day, according to a joint resolution in Congress that had been drafted in 1971 by the late Bella Abzug to commemorate the 50th anniversary of the passage of the 19th Ammendment in 1920, which granted women the vote. "We are here to celebrate women's history," Fields exhorted, "activate our constituency, and concentrate on victory in November!" Moreover, she said, "We must move the Bush administration out of the White House and install the Kerry-Edwards team that will work on issues we most care about." Those issues included healthcare, reproductive rights, education, pay equity, unemployment, domestic violence, prescription drug costs.

"That's right, you said it," muttered a very short woman next to me, who appeared to be neither a member of the press nor an activist. In fact, she reminded me very much of the kind of older woman I tend to stand next to on the smoked-fish line at Zabars. Fields engaged the crowd in a brief chant that went, "When women vote, Democrats win!" "Yaaaay," said my neighbor, in the flat tone usually reserved for congratulating a friend on winning at mah-jongg.

Fields introduced former ambassador to Norway Robin Chandler Duke, whose chiseled features and rich patrician voice come from an entirely different era -- or at least a different neighborhood -- of New York. Duke, who was born in 1923, urged her audience to "get your grandmothers out, call on them in their retirement homes ... not just here but across the country." It's the only way, she assured the crowd, "that we can make jolly sure we've got a good one" in office come 2005. She noted that in addition to being Women's Equality Day, Aug. 26 was also the birthday of Geraldine Ferraro, and assured us that at some point -- even if it was farther into the future than she herself would see -- we will have a woman president. "I shouldn't be standing in front of City Hall," said Duke. "I should be sitting in an easy chair. But I am going to go down fighting!"

"Yaaaaaay," said my nasal neighbor, as Duke walked off in her sun hat.

"The Sopranos'" Edie Falco was next, though it was nearly impossible to hear her with a microphone turned to low volume and the threatening howl of sirens circling neighboring police headquarters. But Falco's point was enfranchisement. "Nobody knows what it's like to be a woman except a woman," she said, noting that for those of us who are female, "some terrible things have gone down in the Bush administration." The only solution, she said, is to "get your sisters and grandparents out and get them to vote. Let them know their voices are important. Their specific voices are important. No one else has 'em."

"She's so right, that girl," said the lady next to me, clapping heartily.

Rep. Nydia Velazquez, D-N.Y., spoke passionately about the enormous deficit under the Bush administration, and the way the president's tax cuts have only benefited the rich. "At every opportunity he chose Wall Street over Main Street," she said of the president. She was followed by United Federation of Teachers president Randi Weingarten, a bundle of energy who railed against Bush's education policies, proclaiming that "there may not have been many corporations left behind, but there have been so many children left behind by this administration." There was a slightly gnomic interlude from actress Bebe Neuwirth -- whom Fields mistakenly introduced as Mimi -- who remembered watching the World Trade Center fall from the "huge windows" of her Greenwich Village apartment. She said that the experience had changed her, and that she believed that Kerry, thanks to the "wisdom, the intelligence and the experience of having served as a naval officer in actual combat" is the man who is best equipped to protect us from future terrorist attacks.

Public advocate Betsy Gotbaum pointed to the crowd -- which had expanded significantly over the course of the first 20 minutes of speeches -- and now included John Kerry's sister, State Department employee Peggy Kerry, who shares her brother's attractively equine face. She was dressed in a mint suit with a sparkly Kerry 2004 pin on its lapel, but melted away as soon as her presence at the rally was made known.

Rep. Carolyn Maloney, D-N.Y., finished up the noon rally, again emphasizing the 84th anniversary of women's suffrage. She said that six out of 10 undecided voters in the U.S. are female. "Oh my god," said the woman next to me, shaking her head disapprovingly at this statistic. Then Maloney began to argue for why Kerry should be the man to sway them. "John Kerry will select judges who represent intelligence and balance and who will respect our reproductive rights, not American ayatollahs who will turn back the clock on women," she said. Under Bush, Maloney claimed, we have lost 1.8 million jobs, "the worst record since Herbert Hoover and the Great Depression."

"We'll be hearing a lot of blather next week about how the 'W' in George W. Bush stands for 'women,'" continued Maloney. "But we know that 'W' stands for 'Wrong Way.'"

"Yaaaaay," came the voice beside me.

Then it was over, and the women began to mill around. Former MTV VJ Karen Duffy and her pal Lilibet Foster, whose film "A Patriot Act" will run next week during the RNC, had come by to listen. "We were going to get dressed up as suffragettes," Duffy said, pointing to the blue messenger bag resting against her butt. "See, I already have my bustle." She proudly said she's planning to stay in New York next week, and that she had even canceled a vacation in Italy to do so. She also bragged that she had put her son in a "Diaper Democrat" shirt and that her neighbor, who is Colin Powell's sister, had seen it and commented, "That's right, baby!"

C. Virginia Fields stuck around to talk about her role at the convention. As president of the welcoming borough, she would be addressing some of the Republican delegations, she said. But mostly, she would be observing, and worrying about security. This morning, those worries had already started when activists draped an anti-Bush sign from the roof of the highfalutin Plaza Hotel. "The good news," said Fields with a mischievous smile, "is that it's only five days. We'll get through that, cause we always do."

Peggy Kerry was nowhere to be found, and Falco had disappeared as soon as she was done speaking. Duke was cruising back across City Hall Park, and was telling a friend in her honeyed voice, "I'd like to go somewhere and have a drink." They were all New Yorkers, heading back onto the streets of their city. They'd done what they could to make a stand against the coming tide. Now it was just another beautiful day for shopping, walking, grabbing lunch, and appreciating the beauty of the city before the heat rolled in.