Island of the cannibal Republicans 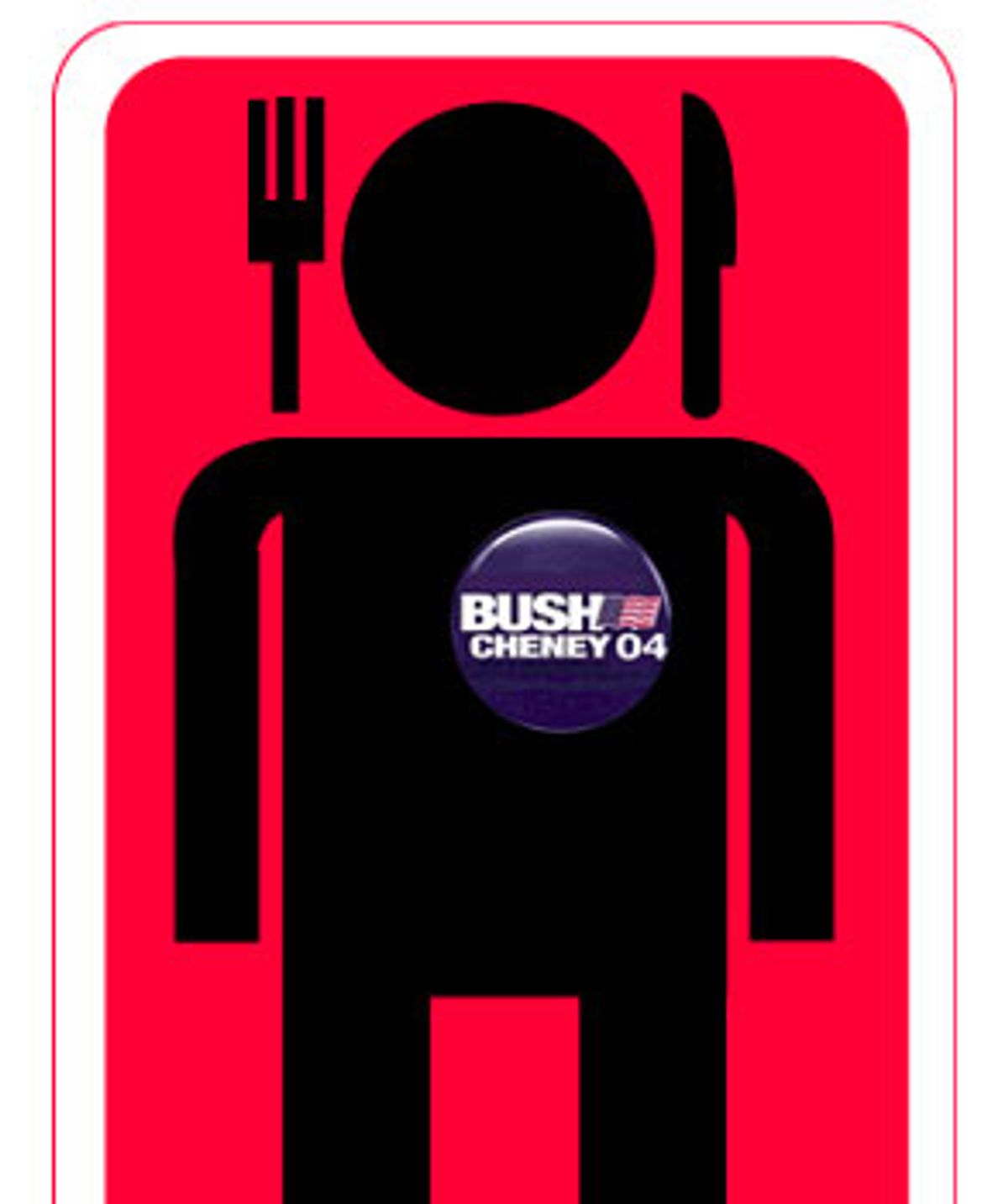 Among the varied delicacies New York will offer Republican guests is a book titled "The Compassionate Republican's Guide to Mastering the Art of Human Cookery." It was originally meant to be sold, along with hot dogs, from a cart at Broadway and 27th Street. (That arrangement has fallen through, but it can be mail-ordered from Amazon and Powell's.) The self-published book is an updated version of Jonathan Swift's famous satire "A Modest Proposal," in which Swift suggests that, as a cure for poverty in Ireland, that the Irish eat their children. In typical New York fashion, author Robert Lesser has done Swift one better. In response to the voracious appetites of the Bush administration, Lesser has expanded the menu to contain recipes for everything from sautéed Hillary Clinton to fricassee of homeless. Recipes, as Lesser points out, were conspicuously absent from the original.

Like Swift, Lesser sees humor as the only rational response to an irrational political situation. "You see, politics has become so bitter," he says, implying that calling the Republicans cannibals has somehow elevated the discourse. "Well," he says, "I think it's funny."

The 71-year-old Lesser anticipates that the book will be a great success, if not with the delegates themselves then with the legions of protesters also expected to descend on the city. Lesser's motivation, however, was not primarily financial. "I did not want to write this book," he begins. "I had to write this book. It's a very mysterious process. All of a sudden I am captured by a character and I am carried away, just carried away by it. It is a very spiritual experience for someone who is not religious." In this case, Lesser's muse (and narrator) is a 107-year-old Republican named Thanatos. Thanatos has an impressive knowledge of literature and science but, especially towards the end of the text, gets a little sloppy with spelling and grammar. "I didn't expect people to read that far," Lesser admits.

Lesser has a lot riding on the success of the book. It cost him $5,000 to publish -- a significant amount of money for someone whose primary occupation is collecting robots and comic book covers. Before turning to satire, he wrote two coffee-table books on comic and pulp art, and his collections of robots, space toys and pulp posters have been exhibited at the Brooklyn Museum and the Museum of Science and Industry in Chicago. Lesser says of his unusual career, "When I finished my master's degree at the University of Chicago they wanted to get me a job so I could pay off my student loans. I was horrified. 'A job?' I said. 'But I have ideals.'"

Looking around Lesser's apartment, I suspect that he has spent a lot of time alone with his ideals. The only space to move in the cavelike two-bedroom is about six inches on either side of his single bed and desk. The rest of the space is filled floor to ceiling with tin robots, posters and little tableaux he has constructed using plastic action figures.

Lesser has never been married, although he says he has a lady friend with whom he spends quality time. "Only one word you need to know to keep a woman happy and that is 'yes,'" he says. "Whatever it is: Yes." The topic of women leads him to his next literary project: the secret sexual diary of a 13-year-old girl living at the end of the 21st century. He seems genuinely shocked when I suggest that the idea of a man in his 60s writing such a thing might strike people as perverse, even unsavory. "Oh it's nothing like that," he says. I refrain from asking him what it is like.

Lesser is wearing an oversize Grateful Dead T-shirt and very short shorts from which his skinny legs protrude like pale carrots. He assumes a sphinxlike demeanor atop his Battlestar Galactica bedspread as he traces the Bush administration's policies back to Plymouth Rock. "Puritans," he exclaims. "George Bush is a direct descendant of the Puritans. You see, on one level the compassionate Republican is compassionate, he takes care of his family, he may take care of his community in the limited sense. But Puritans have always believed that God has given them the truth and that the truth is singular. There are believers and heretics and nothing in between. This means that really good guys who pray and clean their fingernails and pay their taxes also want to burn witches. Bush has put more people to death in Texas than any other governor in history. And that's why I -- I mean Thanatos -- had to write this book. It is only through comic exaggeration that you can begin to see the true absurdity."

When Swift published "A Modest Proposal" in 1729 it was an instant sensation. By using the language of the English lords to take the logic of oppression to its illogical extreme, Swift demonstrated the bankruptcy of the system as well as highlighting the desperate plight of the Irish. But Swift was already an influential writer and politician, and also a genius. There is little chance that "The Compassionate Republican's Guide to Mastering the Art of Human Cookery" will show the Bush administration the error of its ways, despite its recipes.

But who can predict what effect Lesser, and the countless other New Yorkers who plan to protest, will have on the visiting Republicans? After all, convention officials and city authorities can prepare for banners hung from scaffolding, for screaming protesters and even for the possibility of terrorism. But they can't prepare for New Yorkers. They can't prepare for Robert Lesser, someone who should have been squashed years ago by Adam Smith's invisible hand of commerce but who has popped up laughing. Someone who says proudly: "I got a whole closet full of unpublished manuscripts. Yes, I'm one of those types."

I leave Lesser to his robots and manuscripts and find myself blinking in the brightness of a New York afternoon. What will the Puritans make of New York -- of eight million people each going in different directions? Maybe the city itself is the most effective challenge to the idea of singular truth. As I walk down Lexington Avenue, the words of another New Yorker come to mind. "Do I contradict myself?" Walt Whitman asked in "Song of Myself." "Very well then I contradict myself, (I am large, I contain multitudes.)"

David Womack writes for the Guardian (U.K.), I.D. magazine, Cabinet magazine and other publications. He lives in New York.