It's every ideologue for himself as even the most hardcore Republicans try to distance themselves from the disaster in Iraq. 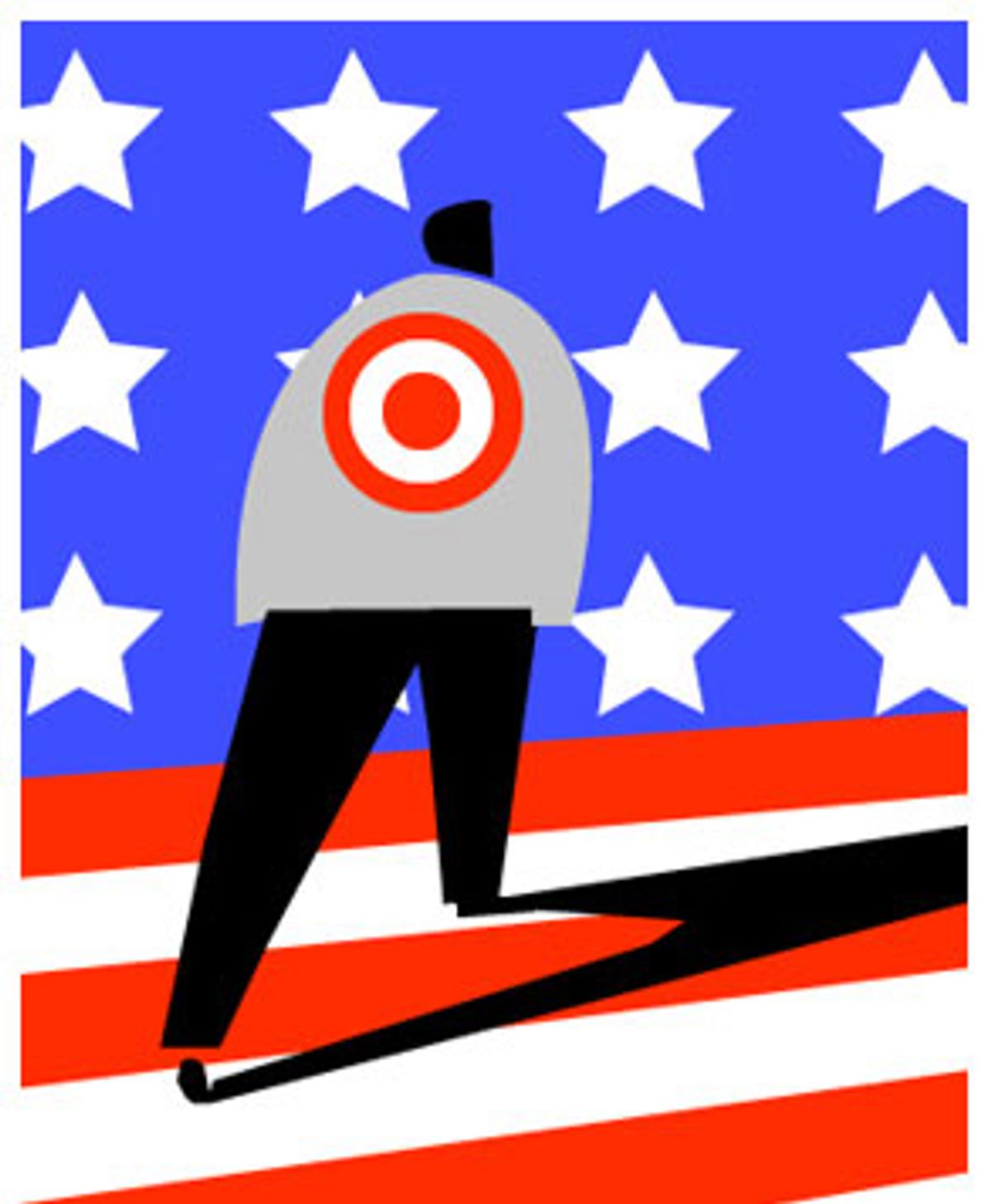 The Grand Old Party's "big tent" on foreign policy is flapping in tatters. Behind the Republicans' predictable show of Rambo bravado as they gather in Madison Square Garden Monday, they are reeling. The libertarians and isolationists have left in disgust. The respectable traditional internationalists of the James Baker-Brent Scowcroft school are holding their noses and saying nothing, but behind closed doors they are seething. President Bush and his fundamentalist evangelicals have left only the neoconservatives who plunged them into the nightmarish swamps of Iraq. And now even that notoriously disciplined group has gone rogue and is rioting wildly: The neocons have turned upon one another -- and on Bush himself.

The neoconservatives who dominate the civilian echelon in the Pentagon and on the National Security Council understandably remain silent. With their every prediction and assurance about Iraq discredited, there is little more they can do but hope for another war, this time with Iran, that will miraculously sweep away all their problems. It is like betting the second mortgage on red when you have already lost your shirt and the roulette wheel is rigged to turn up black.

They would prefer that their longtime favorite, Ahmed Chalabi, the veteran head of the Iraqi National Congress who is now under indictment in Iraq for various crimes, were forgotten by the usually compliant mainstream media. But it is their own sympathizers and fellow conspirators on behalf of Chalabi in the media, led by the likes of Washington Post columnist James Hoagland and neocons Michael Ledeen and Michael Rubin in National Review Online, who will not let Chalabi's embarrassments die.

On Aug. 19, Rubin, formerly a midlevel advisor to the Coalition Provisional Authority in Baghdad and now at the American Enterprise Institute, blasted Bush, noting that the president cannot escape the tainted legacy of his father. "There is little goodwill left in Iraq," he opined. "The United States government has managed to squander it. Bush may be sincere about his desire for democracy, but to Iraqis, family matters. Iraqis associate the president with his father, who is notorious among Iraqi Shia for his failure to support their March 1991 uprising."

Rubin went on to attack administration policy as incompetent. "The recent siege of Najaf reinforces the Shia belief that the U.S. government is anti-Shia. In recent days, I've spoken to a number of Iraqis from Najaf, Samawa, and Diwaniya. They are disgusted."

Bush's right hand in foreign policy, National Security Advisor Condoleezza Rice, who sided with the neocons against Secretary of State Colin Powell on almost every major Middle East issue, doesn't get any kinder treatment. On the contrary, Rubin lays the Iraq debacle firmly at her door. "In October 2003, the White House launched a major reorganization of its Iraq-policy team ... Rice became titular head of the Iraq Stabilization Group, but her deputy (and former mentor) Robert Blackwill, who is well known for his slash-and-burn management style, became chief for political transition. His influence on Iraq policy was quickly felt in both Baghdad and in Washington."

Chalabi's disinformation shaped the decision and planning to invade Iraq, including the assumption that Iraqi masses would embrace their American liberators in gratitude indefinitely. Today, these masses are openly calling for U.S. forces to be swept out of the country, and no one in the administration dares to say a word in defense of Chalabi. Yet Chalabi's hardcore defenders are still at it, slandering the U.S. intelligence community in defense of the convicted bank embezzler.

But as the death toll of U.S. troops in Iraq relentlessly climbs toward 1,000, the leading intellectual neoconservatives outside the administration have turned to feud viciously among themselves.

Francis Fukuyama, whose famous, absurd, but at the time eagerly acclaimed thesis of "The End of History" was a defining neocon text after the collapse of Soviet communism, has published an article in the summer 2004 issue of the conservative National Interest, energetically taking on columnist Charles Krauthammer for his idea of a "unipolar" American moment that, Krauthammer argued, would last for generations, or even a century.

"Krauthammerian unipolarity has increased hatred for the United States in the broader fight for hearts and minds," Fukuyama wrote. He took issue with Krauthammer's contention in a speech delivered to the American Enterprise Institute in February 2004, in which he described the United States as being in the midst of a long, grim war with an implacable enemy out to destroy Western civilization. "That kind of language is appropriate as a description of Israel's strategic situation since the outbreak of the second intifada," Fukuyama pointedly noted. "The question is whether this accurately describes the position of the United States as well ... I believe that there are real problems in transposing one situation to the other ... The United States faces a much more complex situation."

Fukuyama also has harsh words to say about the Bush administration's now-infamous September 2002 "National Security Strategy" report that asserted the policy of preemptive war. "Even talking about such a strategy, as we did in the National Security Strategy document, will tend to promote opposing coalitions and resistance to U.S. policies ... It is hard to see why we would want to put ourselves in this position. It is hardly an advantageous position from which to launch an idealistic Wilsonian crusade to reshape the Middle East."

Meanwhile, Krauthammer is preparing a counterblast at Fukuyama -- "breathtakingly incoherent," he has called him --for the next issue of the National Interest.

This neocon food fight is embarrassing enough for Bush, Cheney and Wolfowitz. After all, their every other source of intellectual talent on foreign policy has been alienated or thrown overboard. After four years of leaks, humiliations and endless media criticism by leading neocon columnists, Powell and his deputy, Richard Armitage, plan to step down, even if Bush is reelected. The last remnants of the proud, moderate and bipartisan internationalists -- stretching from the time of Dwight Eisenhower and Thomas Dewey to Baker and Scowcroft -- will go with them. The neocons, both inside and outside the administration, are all Bush has left. But they are now openly turning on their greatest patron, trying to blame Bush for the bungles in Iraq.

The neocons are acting as though they smell the sweet, sickly scent of defeat wafting over the Bush campaign. Indeed, they have already prepared what they imagine will be their lifeboat to escape its wreck and reclaim their political respectability. They recently thawed out, with the support of honorary chairmen Sen. Joe Lieberman, D-Conn., and Sen. Jon Kyl, R-Ariz., the old Committee for the Present Danger. Nothing better reflects the Jurassic antiquity of their conceptions. What worked to make them respectable and influential 30 or 40 years ago, in the last cycles of the Cold War, will now, they believe, make them the leaders of a united America against the global challenge of extreme, militant Islam.

The members of the new committee are the same hoary folks who were so eager to charge into Iraq in pursuit of those famous weapons of mass destruction that were never there in the first place: former House Speaker Newt Gingrich, a close buddy of former Pentagon advisor Richard Perle and Wolfowitz who sits on the Defense Policy Board; Jeane Kirkpatrick of -- where else? -- the American Enterprise Institute; and former CIA Director James Woolsey, who did so little to anticipate the rise of al-Qaida and drew payments as the lawyer for Chalabi's Iraqi National Congress.

The committee's real purpose is obvious: to restore to the neocons a fig leaf of respectability and a claim to the bipartisanship they never practiced for a second when they were in power. One can guarantee that Wolfowitz, Feith, Libby and the rest of them will eagerly join the committee's board to suitable hosannas in press releases the day after Bush takes his one-way flight back to Crawford, Texas.

What is the reaction of the president, his national security advisor and his political master strategist, Karl Rove, to the necons' open and flagrant rebellion and the palpable contempt with which they are now treating their benefactors? It is, as usual, to bury their ostrich heads ever deeper in the sand. Bush, with the curious passivity that betrays his macho self-image, has not fired a single defense or national security official during his nearly four years in power despite the unprecedented catastrophes they have led him into. They know they can rely on Bush's predictable timidity to let their own closest associates in the media run wild with their tacit approval, even though this behavior only serves to further humiliate him.

For where else can Bush go? He has isolated himself with his own simplistic vision of the world and his pathological anti-intellectualism. Bush truly believes that by embracing the neoconservatives, he freed himself from the chattering classes. He does not realize that he thereby made himself the hapless and helpless puppet of the most irresponsible, incompetent and pretentious intellectual clique of all: the neocons themselves. And now he is stuck with them, even while they openly spit upon him and prepare to flee.