"We the people say no to Bush" 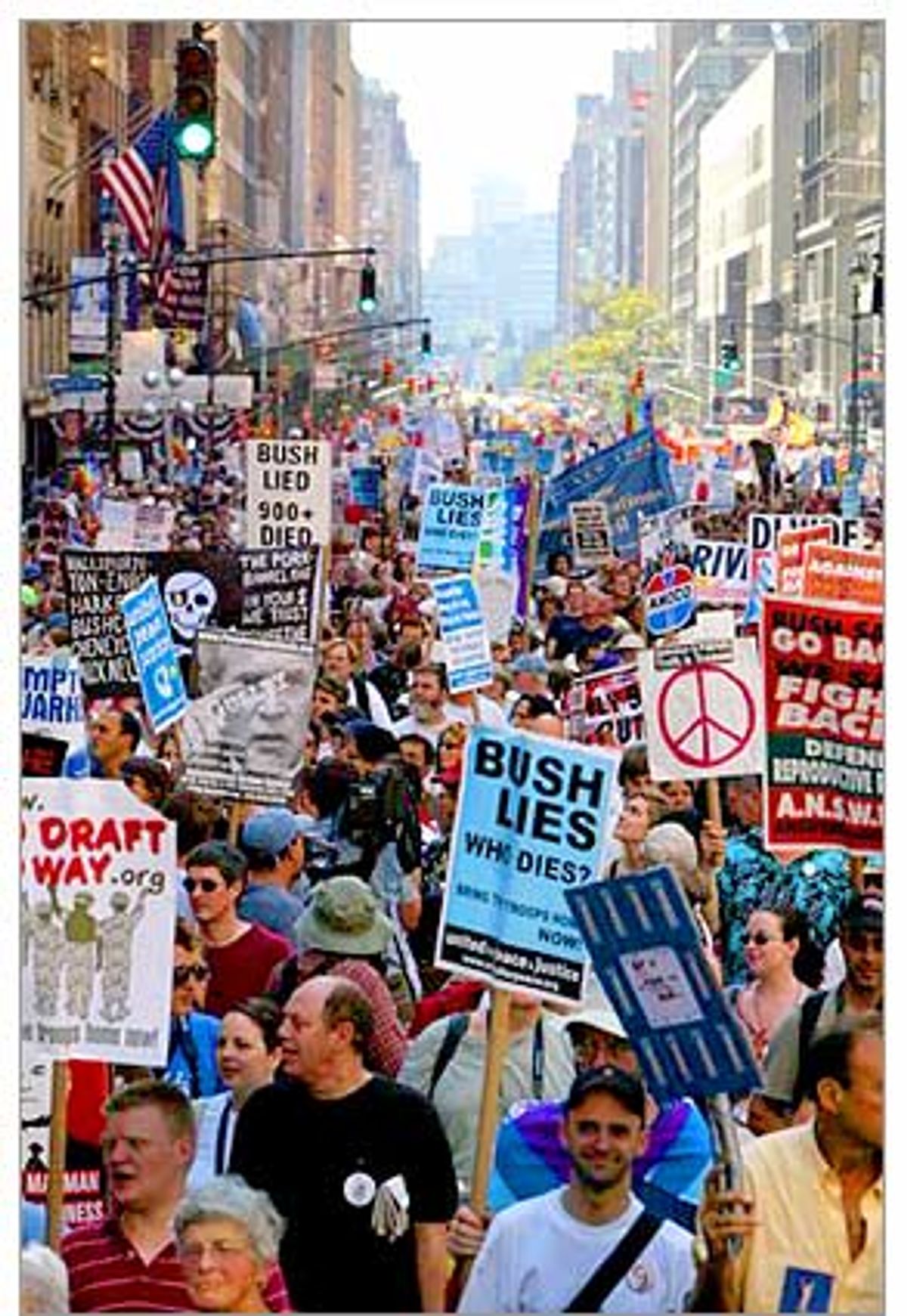 New York's East Village looked like a police state. By 10 p.m. Friday night, cops in riot gear lined Second Avenue. A police helicopter flew overhead, strafing the neighborhood with its spotlight. Inside Saint Marks Church, a sanctuary for anti-Republican National Convention protesters, the mood was electric. The first big protest of the convention had been larger than almost anyone expected. The week that activists have anticipated for months had finally and brilliantly begun.

Earlier that evening, about 5,000 people staged a big Critical Mass bike ride in Manhattan. Surging up 6th Avenue, then across town and down to the East Village, they'd taken over the streets, blocking traffic, infuriating commuters and taxi drivers, and reveling in their own numbers. More than 250 people were arrested, but the thousands who weren't were soaring on adrenaline.

"I fucking love this shit, man! That's what this is about!" gushed 26-year-old Brandon Neubauer, an organizer with Time's UP!, a pro-bicycle environmental group. "The police tried to instill so much fear, and people came out in the largest critical mass in New York City history. For a good half hour, they had to sit back and watch us. People are fired up. This is for real."

It was just the beginning. Friday's protest was big. Sunday's was enormous. Many things conspired to depress turnout at United For Peace and Justice's massive march. There was confusion over permits and march routes, tabloid-stoked hysteria about rampaging anarchists and the traditional August exodus from Manhattan to the mountains and sea. But in the end, people poured into the sweltering streets to demonstrate against George Bush and the Republican National Convention. Definitive numbers, as always, are hard to come by, but Seventh Avenue's streets and sidewalks were packed for hours from 14th Street to Midtown. By Sunday evening, the New York Times was reporting that hundreds of thousands marched. United for Peace and Justice claimed half a million, and according to the Times, a police officer surveying the scene also estimated the crowd at 500,000. For UFPJ, it was an enormous success.

It remains to be seen whether the Republicans felt all the fury being directed at them. Throngs roared with disapproval as they marched by Madison Square Garden, where the convention begins today. They chanted, "You're Not Welcome!" and "Fascists!" but it was unclear whether there were any Republicans around to hear them. Several groups of direct-action protesters went to Times Square to taunt the delegates on their way to and from Broadway matinees, but an overwhelming police presence insured that there were only a few confrontations. At around 4 p.m., a weathered, elderly Texas delegate wearing a gold "W" pin and a cowboy hat walked through Times Square completely unmolested. "I've not seen any protests," he said. "But I just saw a buncha queers trying to have a weddin'."

A little later, Mayor Michael Bloomberg walked uptown on Broadway, surrounded by Secret Service agents, with only a single protester -- a guy dressed as a missile -- in sight. Asked what he thought of the demonstrators, he said, "Everything's peaceful and people are having a good time and expressing themselves. This is a fantastic city."

That was before the mass arrests began.

For most of the day, there was a carnival air in the streets. The crowd was almost as polyglot as New York itself. A man from the International Bolshevik Tendency marched beside a guy whose sign called for "More Dior, Less War." Christians Against the War held posters asking "Whose Taxes Would Jesus Cut?" An incredibly tight marching band from Seattle moved through the mass of people. There was a giant green papier-mache dragon, which later caused a few moments of chaos when it was set on fire outside Madison Square Garden. Clash songs blasted. It was a party.

It was also a rebuke. A great many New Yorkers are profoundly insulted by Bush's decision to use their city -- whose cosmopolitan values he's treated with utter contempt -- to bolster his reelection bid. "Our city's tragedy is being used for propaganda," said Bradley McCormick, a 35-year-old from Spanish Harlem. "I'm upset about the insult to New York City. I think it's going to backfire."

In the run up to the convention, there were fears that the protests would backfire, that swing voters would see middle American delegates besieged by angry urban radicals and blame it all on the Democrats. Some had worried that undercover agent provocateurs would try to spur violence, but that didn't happen. Indeed, the provocateurs made no effort to disguise themselves.

Protest Warriors, a Texas-based, right-wing group whose members have crashed lefty demonstrations carrying mocking signs like "Communism has only killed 100 million people. Let's Give it Another Chance," sent a contingent to march into the crowd. "We're about to have some fun," said Sergio Kadinsky, a 20-year-old Protest Warrior from City College of New York. At first, to their evident frustration, they were ignored or indulged. "They have the right to be here, but they're jerks," shrugged McCormick.

Soon enough, though, a group of outraged anarchists saw what was going on, tied their bandanas around their faces, and charged, yelling, "Bullshit! Bullshit! Bullshit!" A brief fistfight ensued, during which several of the Protest Warriors' signs were broken. That was pretty much the extent of the day's violence.

Dan McKay, a 42-year-old protester from Williamsburg, Brooklyn, was relieved. "Everybody behaved so well," he said. "I was worried, you know, that fights were going to break out and it would be all over Fox News. But it's looking good and we're going to take off and hopefully everybody will disperse."

His companion, Donna Blackburn, 38, was also thrilled with the march's passionate, peaceful vibe. "The energy was very positive, very good," she said. "I think everybody made their point, I don't think there was much violence. I am so proud of New York, you know? I am glad people stood up and were counted today."

"It sends a message to the rest of the world that we're all not pro-war and pro-empire," McKay added.

The mass march ended at Union Square, just a few blocks from where it began. There was no rally. United For Peace and Justice had wanted to gather people in Central Park after the march, but the mayor refused to grant them a permit, citing possible damage to newly planted grass. Without a place to gather afterwards, there was a sense of relief -- no dull droning speeches -- but also of anticlimax. People wanted to come together.

Thousands lingered in Union Square after the march, showing off their signs and checking out their fellow protesters in what felt like a lefty street fair. There was a wobbly George W. Bush blow-up doll that passers-by smacked as they moved through the park -- the doll careened to the side and then back again, waiting for another shove. A crowd gathered around the satirists Billionaires for Bush as they did their post-march shtick. Men in top hats and women in shawls and pearls carried signs reading, "Leave no billionaires behind" and "Tax wages not wealth." They cracked up their audience with right-wing twists on typical protest chants: "What do we want? Sweatshop labor! How do we want it? Cheap!" "No justice! No problem!" and "Whose Florida? Our Florida! Whose voting machines? Our voting machines!"

Union Square can't hold even a fraction of those who marched on Sunday, though, and most people dispersed into the city. Many, though, weren't done protesting. Hundreds, perhaps thousands, went to Central Park, preparing to defy the police and fight for their right to use Manhattan's scarce public space. The cops largely left them alone, and a celebratory picnic atmosphere prevailed. Things were more tense in midtown, where a few anarchist groups hoped to harass delegates on their way to and from the free matinee Broadway shows that were a perk from the city.

Some protesters had announced plans to gather on Broadway around 4 p.m., and just before 5, when Bloomberg walked by, it looked like the action was a bust. Soon, though, a defiantly scruffy group marched toward Broadway from 44th Street, carrying a spray-painted banner reading, "U.S. Out of North America," and chanting, "What's the solution? People's Revolution! What's the reaction? Direct Action!"

At first there were only about 30 of them, but as they strode up and down Broadway, others joined, Pied Piper-style, until there were hundreds. After a while, the chants faded. It was hot -- temperatures had been in the high 80s all afternoon, and there was no shade on most of the march -- and people's energy seemed to be flagging. But then, as the anarchists moved south, another group called Queer Fist marched north to join them, shouting, "We're here! We're queer! We're fabulous! Don't fuck with us!" A topless woman and men wearing black wedding veils assembled on 45th Street and started making out, hoping to appall prudish and homophobic Republicans. Unfortunately for them, by the time Queer Fist arrived, the delegates were safely ensconced in theaters presenting the most anodyne entertainment New York has to offer.

As this was going on, cops in riot gear were converging from all over. Some were on foot, some on new scooters and some on horseback. Arrests seemed inevitable.

As the police gathered, Queer Fist moved onto the Times Square traffic island to repeat their kiss-in. But the police herded them off the island and onto a Broadway sidewalk, where they put up a cordon of orange netting and detained everyone inside, including a few journalists and two innocent bystanders who had walked over to see what all the commotion was about. A Swedish television reporter tried to get her camera man out, but a cop said that everyone in the net was under arrest. Moises Saman, an award-winning Newsday photographer, was handcuffed and put into a paddy wagon, even though his press credentials were clearly visible.

Across the street from the corner where the Queer Fist Activists were being held, another group of anarchists converged. At the front, five people held a black banner saying, "Right Wing Scum Your Time Has Come." Again, the police started surrounding them with netting.

Then the Broadway shows started letting out and protesters had a chance to tell at least a few Bush supporters what they thought of them. Jamie Moran, a member of the collective RNCnotwelcome.org, was dressed like a young Republican in khakis and a button-down shirt, so he was able to get somewhat close to the delegates as they left the musical "Aida." Moran shouted, "Your presence here is offensive, no one supports you." The delegates responded, "Four more years," and people screamed back, "Four more days," meaning, Moran said, the delegates were in for four more days of abuse.

As of 11 p.m., about 200 arrests had been reported, including six of legal observers. According to the leftist Web site Indymedia, small demonstrations continued all over the city into the night.

The crackdown may be just beginning. On Sunday, an item in the Drudge Report said that Ashcroft's Justice Department is investigating one of the Web sites that provides protesters with information about Republican delegates. Meanwhile, activists have designated Tuesday as a day of direct action and civil disobedience, suggesting that what happened Sunday on Broadway may be just a tiny taste of what's to come.

The big march is over, but the protests are just starting.

Geraldine Sealey contributed to this story.