The passion of the Rudy

The GOP's Monday night moderates try to fire up the convention's far-right true believers. But Michael Moore is more successful. 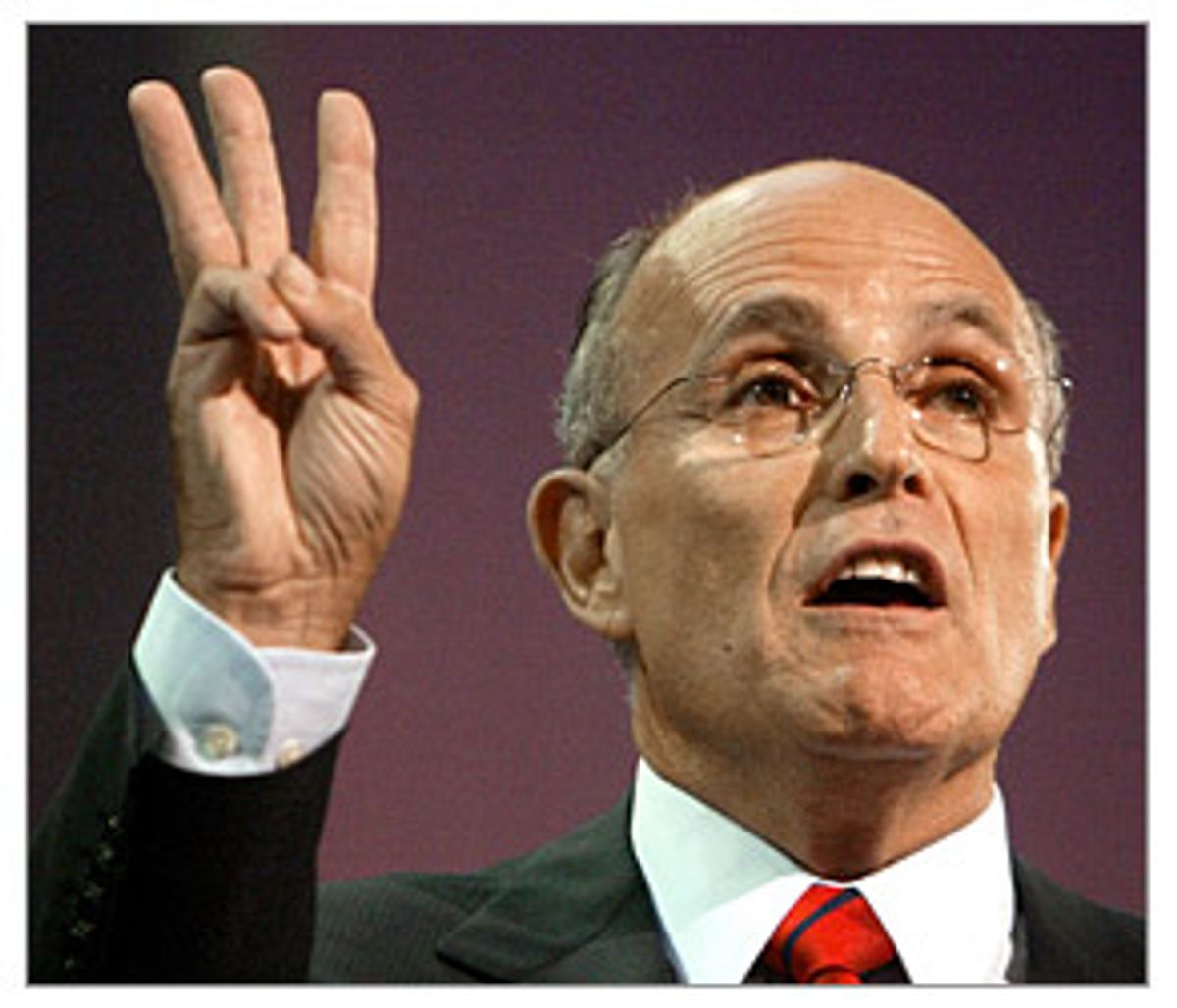 It was quiet at ground zero Monday afternoon. A few dozen tourists approached the big hole with the slow respect they might show an open casket. Here and there, people held their cameras up to the fence and clicked photos to show the folks back home. A fat man in shorts and a Harley-Davidson T-shirt pulled his sunglasses from his face and wiped away a tear. Across the street at St. Paul's Chapel, banners preserved from the days after Sept. 11 spoke of light and hope, gratitude and a connection to one other.

There was a moment then, a moment when Americans felt connected to one another -- and the world felt more connected to us -- when Le Monde proclaimed for the world, "We are all Americans."

Inside Madison Square Garden Monday night, the Republicans tried mightily to bring that moment back, even as they ignored the reasons it was lost in the first place. On the strangely flat opening night of the Republican National Convention, speaker after speaker reminded delegates of Bush's bravura performance at a ground zero photo opportunity in 2001 -- the one where he grabbed a bullhorn and vowed that the terrorists would soon "hear from" the United States -- and then papered over the president's unpopular war in Iraq.

Recalling the days after Sept. 11, Arizona Sen. John McCain told delegates: "We were united, first in sorrow and anger, then in recognition we were attacked not for a wrong we had done, but for who we are -- a people united in a kinship of ideals, committed to the notion that the people are sovereign."

Turning to Iraq, McCain argued that the war was necessary and inevitable. He dismissed criticism of the decision to invade Iraq as the naive and misguided rantings of Michael Moore. In the only real show of enthusiasm of the night, the crowd roared its approval, at least in part because Moore himself was in the hall to hear it, chuckling at the Republican fusillade directed at him from his seat in the press gallery, where he is filing a column for USA Today. But Moore wasn't the only war critic in the house Monday night; McCain himself has taken the administration to task for sending too few troops to Iraq and for failing to plan for the postwar period, and he has led the questioning about the abuses at Abu Ghraib prison. He didn't mention any of that Monday night.

If McCain buried his criticism of the war, former New York Mayor Rudolph Giuliani took his support for it to new heights. He resuscitated the administration's seemingly abandoned rationale that Saddam Hussein had something to do with the attacks of Sept. 11, invoking -- as at least three previous speakers had -- that ground zero photo op. Giuliani said that Bush "stood amid the fallen towers of the World Trade Center and said to the barbaric terrorists who attacked us, 'They will hear from us.' They have heard from us! They heard from us in Afghanistan and we removed the Taliban. They heard from us in Iraq and we ended Saddam Hussein's reign of terror."

In putting the country on the offensive in Afghanistan and Iraq, Giuliani said that Bush had succeeded in "keeping us unified" and in "holding us together."

Giuliani's words were belied by events in his city -- where hundreds of thousands of protesters filled the streets over the weekend -- and around the country, where polls show that Americans are sharply divided over the president and the war he chose to fight.

For Republicans, George W. Bush is still a resolute hero, and the days after Sept. 11 were his finest moments. Robyn Rutledge, a delegate from North Carolina, said she looks back at those days, and the words "leadership" and "courage" come to mind.

For many Democrats, of course, memories of Bush's reaction to Sept. 11 come in a wave of very different images. There's Bush, sitting in that Sarasota classroom while the schoolkids read "The Pet Goat." There's Bush, flying aimlessly around the country on Sept. 11 to avoid a threat to Air Force One -- a threat that Karl Rove and Ari Fleischer trumpeted and the White House later quietly disavowed. And there's Bush, invoking the attacks of Sept. 11 to launch a war against a different enemy in a different place.

But if the country is divided today, it is not Bush's doing -- at least according to some Republican delegates. "The Democrats have polarized our country," Rutledge said as she waited for the night's speeches to begin. "Our president has been attacked so much over the last year, it's ridiculous."

McCain called for some sort of end to those attacks Monday night. He didn't mention the Swift boat flap or the Bush smears he faced in 2000. Instead, he reminded delegates that Democrats are Americans, too, and he said that neither party should question the other's sincerity. But that didn't stop speaker after speaker from questioning Kerry's sincerity Monday night, suggesting again and again that he has no firm convictions and waffles on important issues. One delegate, Dianne Alexander from California, showed up at the convention in a sweater embroidered with flip-flops. "My issue is national security," she said, "and I don't think John Kerry has ever addressed our safety. I don't think he's serious about it. I know our president is."

Paul Rieckhoff isn't as sure. A New Yorker who helped with search and rescue operations at ground zero and then led an Army Reserve platoon in Operation Iraqi Freedom, Rieckhoff said the focus on Sept. 11 is just a way to avoid talking about the war abroad or safety at home. "I'll tell you, I was at 9/11, I was at ground zero digging bodies out," said Rieckhoff, who now leads a veterans' organization called Operation Truth, and came to Madison Square Garden to see if the Republicans were living up to its standards. "This is an insult to me and to everyone else who was there. If they're trying to take advantage of 9/11 for political reasons, I think it's more of the political posturing crap we've heard from both sides. I want to hear issues. I want to hear what they're going to do to stop 9/11 from happening again."

On the first night of the Republican National Convention, there were a lot of things that nobody heard. In almost four hours of speeches -- speeches devoted almost exclusively to the attacks of Sept. 11 -- Osama bin Laden wasn't mentioned once. The protests in the streets were ignored; a phony convention "floor reporter" said that New York had "rolled out the red carpet" for the Republicans, and delegates universally claimed that they hadn't seen any protesters.

There was also no hint of any discord in the party. The pro-gay Log Cabin Republicans launched a TV ad earlier in the day warning that the religious right was hijacking the party, but the moderates who dominated the prime-time lineup Monday said nothing at all about the party's internal tensions. Although the Log Cabin Republicans view McCain and Giuliani as friends to their cause, those friends did nothing at all Monday to move delegates toward a more moderate view on social issues.

Earlier in the day, delegates ratified platform language that gave the party's right wing just about everything it wanted -- a call for constitutional amendments banning abortion and gay marriage, opposition to any form of legal recognition of same-sex relationships, and tight limits on stem-cell research. The proponents of such hard-right policies weren't on display during prime time Monday, as the Republicans chose to kick off their convention with two of the party's most popular moderates.

Democrats dubbed it a "bait and switch" operation. Democratic National Committee chairman Terry McAuliffe said anyone who wanted to see just how extremist the GOP really is should "turn down the volume and read the platform."

"They're trying to present one view and one face on the party to the people, and they're trying to keep the focus on those who, frankly, have no influence in Washington, with all due respect," Sen. Hillary Clinton said Sunday. "They're not running the House -- Tom DeLay is. They're not running the Senate -- the Republican Senate caucus largely driven by the most extreme members are unfortunately calling the shots."

Republicans brushed off the charge, saying that the party would be foolish to ignore its most popular politicians during election season. "A party that wasn't smart enough to ask Gov. Schwarzenegger to come and speak would be unworthy of trying to occupy the White House," former House Speaker Newt Gingrich said Monday at a panel sponsored by the moderate Main Street Republicans.

Christine Todd Whitman, the former New Jersey governor and EPA administrator, said during the panel discussion that she thinks too much is being made of the convention's moderate cast. "I have been somewhat amused as I have gotten questioned at this convention, 'Well, isn't it somewhat hypocritical that you have all of these Republican officeholders who are moderate and are speaking?'" she said. "Well, to think about it, no, they're Republican officeholders, and they're speaking and they're moderate. That's who we are."

Republican Sen. Mitch McConnell said that the parties -- both parties -- have to put on a moderate show to appeal to a country split down the middle. "The Democrats painted a much more moderate image with their speeches and speakers than the Democratic delegates," he told a radio interviewer Monday. "We are putting our moderate stars front and center for the very same reason. The voters that are undecided are in the middle, and both sides are doing exactly the same thing."

Not exactly. In Boston, liberal Democrats like Howard Dean, Ted Kennedy, Dennis Kucinich and Al Sharpton all had prominent speaking spots, and sometimes they used them to speak passionately about their causes. Moreover, the speakers who played most prominently on the Democratic stage in Boston represented -- for better or for worse -- the current power structure of the party.

McCain and Giuliani don't represent the reality of today's Republican Party, and Monday night they didn't even do a particularly good job of representing themselves. McCain tarnished his reputation as a "straight talker" by sucking up entirely to a president he has often opposed. Giuliani, meanwhile, lost some of his good-guy luster by engaging in the kind of fact-challenged smearing favored by the Bush campaign. He fudged facts to make the case that Kerry is a flip-flopper who can't be trusted. He said that Kerry had declared himself an antiwar candidate and then a "pro-war candidate" -- a statement that was half misleading and half untrue -- and he claimed that Kerry had suggested he was supported by some foreign leaders -- true -- who opposed the war in Iraq -- false.

And neither McCain nor Giuliani distinguished himself as a speaker. On the Democrats' first night in Boston, Jimmy Carter, Al Gore and Bill Clinton electrified the Fleet Center crowd. Although Giuliani fired off a few anti-Kerry zingers, the overall tone of the night was flat. Maybe it was because, unlike the Democratic stars, the Republican keynote speakers on Monday night were not the red-meat GOP delegates' favorite sons. Giuliani's speech went on forever, but then it ended abruptly. Within seconds, delegates were filing out of the hall and back to their buses, where through the darkened windows they might catch a glimpse of a very different world outside.