From 19th century seafaring yarn to nuclear-power muckraking to a cloned servant in the cyberpunk future, this dazzling series of interlocked narratives is one of the summer's biggest books. 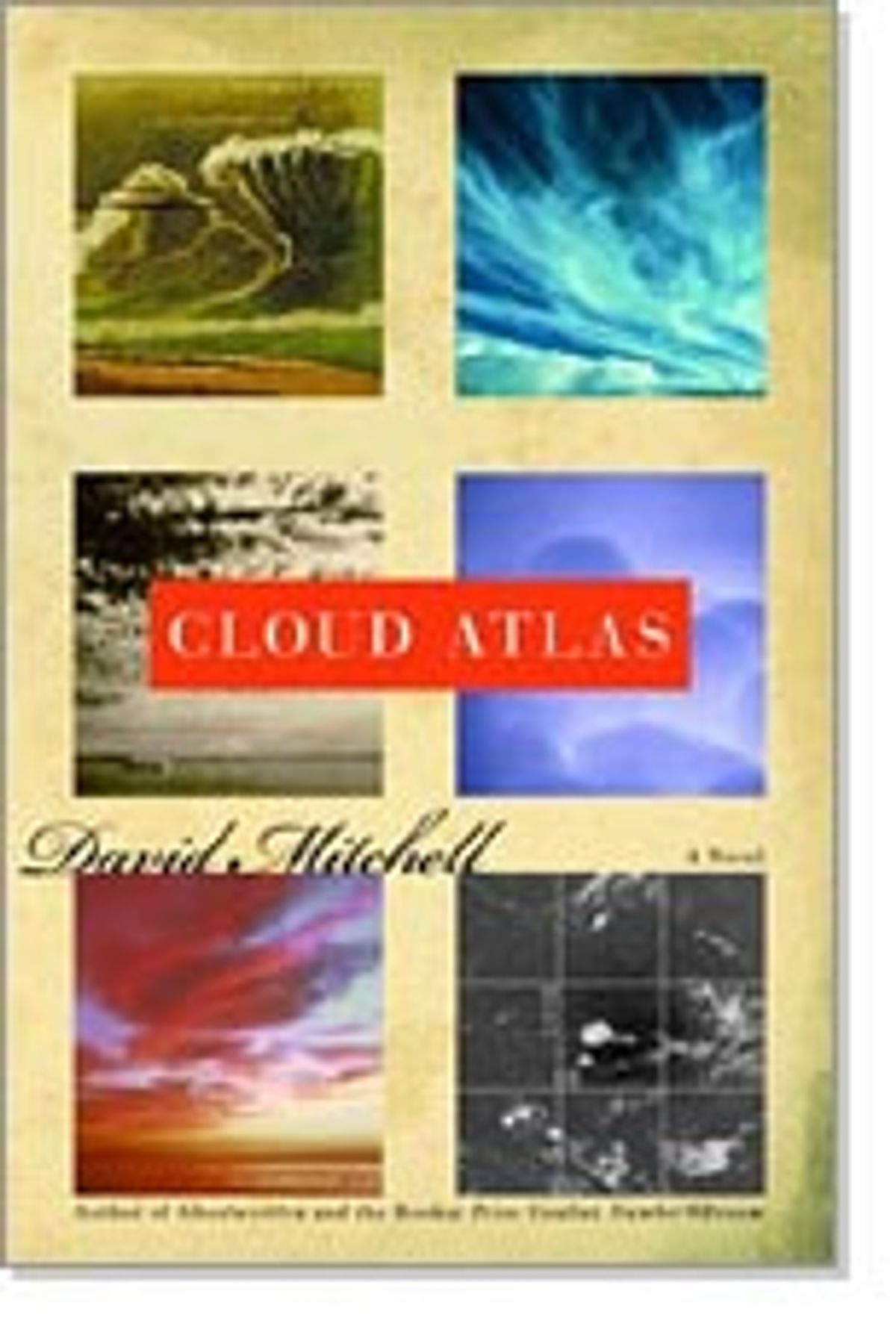 David Mitchell is a spookily protean writer. His favored technique -- he used it in his first novel, "Ghostwritten" -- is to build a long narrative out of shorter ones, stories told in vastly different voices and styles, then cinch the whole patchwork together with some supernal device that reveals their underlying connections. In "Ghostwritten," he couldn't manage to pull off that final, unifying gesture, but his third novel, "Cloud Atlas," is far more convincing, a genuine and thoroughly entertaining literary puzzle.

The novel begins as the journal of Adam Ewing, an American notary seeking passage back to San Francisco from the Chatham Islands (near New Zealand) in the 1800s. He befriends a raffish doctor, acquires the tiniest spark of empathy for the black islanders who have been decimated by a series of exploitative invaders, and even helps a runaway slave he finds hiding in his cabin. Just as the shipboard situation gets menacing, the journal is cut off, not midsentence, but midword.

The book's next section consists of letters sent from Belgium in the early 1930s, written by Robert Frobisher, a young, wastrel British composer who insinuates himself into the household of another much older composer whom Frobisher considers "one of the greats." He offers to serve as the master's pupil and amanuensis. Frobisher's story also gets cut off, and the next section describes the exploits of a reporter named Luisa Rey who is hot on the trail of a conspiracy to cover up the dangers of a nuclear power plant in a fictional California city during the 1970s. The following sections, each interrupting the one before it, concern: an aging, seedy British book publisher imprisoned in a rest home in the present day; the interrogation of a Korean "fabricant" or cloned servant sometime in the future and, even further in the future, the first-person narrative of a goatherd living in post-apocalyptic Hawaii.

I won't describe what connects these stories, since figuring out Mitchell's scheme is at least half the fun of reading "Cloud Atlas." The theme has something to do with the unpredictable endurance of human communication, and a neatly delineated opposition between a crudely Nietzschean worldview -- that human beings are innately predatory and life consists of eating or being eaten -- and a crypto-Buddhist ideal of kindness and the prudent moderation of desire.

This time around, Mitchell's remarkable knack for literary mimicry doesn't undermine the project by making you wish you were reading the other writers he's imitating instead. His allusions are less obvious and less slavish, even if the writers he's cheekily riffing on -- Joyce, Melville, Defoe -- are more canonical. Somehow this seems less crass than piggybacking on Haruki Murakami and Nick Hornby.

But the serious borrowing Mitchell does in "Cloud Atlas" is from genre or near-genre writers: the Frobisher section is a vamp on Evelyn Waugh, the Luisa Rey section is your basic, serviceable thriller, the Korean section -- which features lines like "I was the first consumer she'd seen to facescape fully like a well-known service fabricant" -- is itself a clone of countless dystopian science fiction yarns. Still, only the final post-apocalyptic section strikes me as egregious; it's too derivative of Russell Hoban's great 1980 novel "Riddley Walker," a book that's not widely enough read to be justifiably stolen from. Oh, and the premise comes in large part from Kim Stanley Robinson's alternate history epic, "The Years of Rice and Salt." (No doubt readers with different areas of expertise will discover other spoor here. Feel free to write in with your own findings.)

Nevertheless, what "Cloud Atlas" lacks in originality it makes up for in powerful, fluent storytelling. Other such literary experiments tend to be labored and, frankly, a bit of a slog; Mitchell seems to intuit that in this game too much intellect only drags things down. It's true that in the end, the novel leaves one itch unscratched: Does this writer have any voice of his own, a center? Other novelists with similar gifts for ventriloquism -- notably A.S. Byatt -- never leave you doubting that they do, and in truth, "Cloud Atlas" adds up to a little less than the sum of its parts. But reading it is a pure delight. It is a fine entertainment masquerading as a work of art, and since fine entertainments are nearly as hard to come by, it would be unseemly to complain. (Though if you like "Cloud Atlas," try to locate a copy of "Riddley Walker" too.)

Our next pick: The suburban golden boy has been dead for five years. So how can his ex-girlfriend be carrying his baby?