What's really behind the recent redeployment of U.S. military forces? Making sure no one messes with American access to global energy resources. An excerpt from "Oil: Anatomy of an Industry." 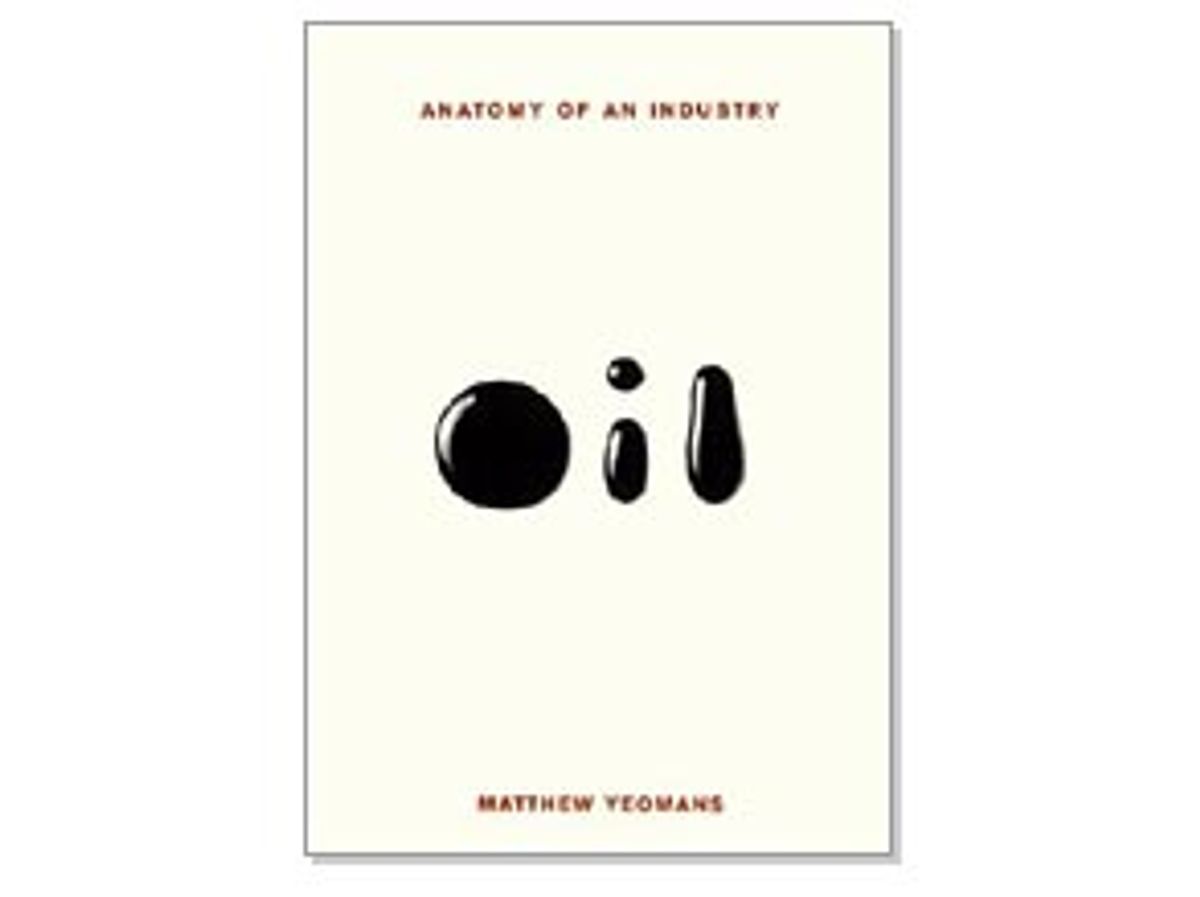 When President Bush announced a radical redeployment of some 70,000 active duty U.S. military personnel currently based in Western Europe and Asia in mid-August, he stressed that this new agile military would be focused on combating terrorism and fostering global stability. What he didn't mention is that the newly dispersed Army, Marines, Navy and Air Force will also be busy protecting another key component of U.S. national security -- its energy resources.

The plan, which the Pentagon has been explaining in dribs and drabs over the past year, is to rotate troops through a large number of bases scattered all over the world, with special attention given to the so-called "arc of instability" running through the Caribbean rim, Africa, Central Asia, the Middle East, South Asia, North Korea and the Caucasus. The new formation includes boosting new regional hub bases as well as establishing minimally-staffed forward operating bases that might house just a few dozen troops but could be quickly transformed into action-ready staging bases.

One look at a map of current Pentagon troop deployment demonstrates how the Pentagon sees its 21st century dual mission. Since 2001, new military bases have been established in Eastern Europe and Central Asia -- including Bulgaria, Azerbaijan, Romania, Kyrgyzstan and Uzbekistan -- allowing the U.S. to keep watch over the Islamic tinderbox of Central Asia and the strategically crucial Caspian Sea oil region which will soon supply millions of barrels of oil to the U.S. and Western Europe markets. Other bases in Afghanistan, Qatar, Saudi Arabia, Djibouti and Oman (not to mention the huge military garrison in Iraq), guarantee a strong and long-term presence in the Persian Gulf, while new pacts with Nigeria and other West African nations will ensure the U.S. military keeps a watchful eye on another important oil region, the Gulf of Guinea.

Energy security has been a mainstay of U.S. foreign policy ever since Franklin Roosevelt pledged to provide military protection to Saudi Arabia in return for unfettered access to the Kingdom's oil. In 1980, the so-called Carter Doctrine declared the U.S.'s intention to intervene militarily to counter any threat to Middle East security. And in May 2001, Dick Cheney's National Energy Policy announced that the Bush administration would make "energy security a priority of our trade and foreign policy." The most recent redeployment of military forces is just one more reaffirmation that in the post-Cold War global order, preserving access to energy resources is the prime strategic imperative.

The seeds of the latest twist in new energy protection policy were sown in 2002 when Congress authorized $98 million for U.S. troops and equipment to help the Colombian army protect oil pipelines owned by California company Occidental. The pipelines were regular targets of the FARC and ELN, the two main leftist rebel groups in Colombia's 40-year civil war. In the spring of 2003, just as U.S. forces were invading Iraq, a far smaller group of 70 Green Berets flew into Colombia to secure Oxy's pipeline.

The funds were authorized under the proviso of the administration's war on terrorism, but the military training had more to do with the National Energy Policy. The Andean nations of Ecuador, Venezuela and Colombia contribute 20 percent of the U.S.'s imported oil. Colombia is the 10th largest oil supplier for the U.S. and the Bush administration has made increased imports from Andean nations an important part of its goal of lessening its dependence on Middle East oil. Colombia's oil is easy to produce and output could be significantly increased were the oil companies not targeted so often. The national government also uses a good deal of its oil profits -- 25 percent of the country's annual revenues -- to fight the rebels.

The Pentagon is also concerned with other areas of the world that have been indentified by the US government as crucial to its energy future.

The Caspian Sea, especially the waters of Azerbaijan, Kazakhstan and Turkmenistan, could prove to be one of the largest oil finds in the world after the Middle East. In 2000, oil companies discovered the Kashagan field off the coast of Kazakhstan -- the single largest oil find in over 40 years. By the end of the decade, Kazakhstan is destined to be the world's fifth largest oil producer.

The U.S. has invested heavily in the Caspian region. U.S. companies have put many billions of dollars into oil and gas projects and both the Clinton and Bush administrations have worked hard to curry favor with the former Soviet republics and limit the influence of Russia, Iran and China in the process. As Anna Borg, a deputy assistant secretary for energy issues at the State Department told Congress in 2003, "The U.S. government and State Department are focusing on [the Caspian] extensively."

Since 2001, the U.S. has not only established military bases in the region but it has also conducted joint Navy exercises with Azerbaijan in the Caspian and has supported Kazakhstan's push to establish its own Navy. The U.S. Coast Guard even patrols the Caspian Sea and the combined U.S. military presence makes Russia -- whose Caspian fleet has long exercised de-facto control over the sea -- very edgy.

As General Charles Wald, deputy commander of the U.S. European Command, explained to the Wall Street Journal in June 2003, "In the Caspian you have large mineral reserves ... We want to be able to assure the long-term viability of those resources."

Of central concern to the U.S. is the Baku to Ceyhan (BTC) pipeline, a million-barrel-a-day project headed by BP, running from Baku, Azerbaijan, through Nagorno Karabak, a region claimed by both Azerbaijan and Armenia, into the turbulent republic of Georgia and on to the Black Sea port of Ceyhan. From there, oil would be shipped via tanker through the Bosphorus and into the Mediterranean on its way to Europe and the U.S.

The BTC pipeline will start carrying oil in 2005 but it runs through a smorgasbord of ethnic unrest. With new military bases in Romania and Bulgaria, a U.S. rapid response force is in easy reach of the Caucasus region to counter any threat to the smooth supply of Caspian Oil. And in Georgia, U.S. forces have been training the local military to counter armed Islamic groups operating out of the lawless Pankisi gorge. The stated purpose of this training is to fight the War on Terror, but insurgent activity now also threatens world oil security.

So far, West Africa poses less of a threat to energy security than either the Persian Gulf or the Caspian. But as this region promises to supply more and more oil to American consumers in the future, the U.S. is planning ahead.

In June 2003, on the eve of President Bush's first visit to Africa -- only the second time a sitting U.S. president had visited the continent -- General James Jones, commander of the U.S. European command, gave an interview to the New York Times in which he outlined another layer of the U.S. military's shift in global priorities.

The U.S. was negotiating with a number of African nations for the long-term use of military bases to help combat the terrorist groups that may be operating in the region. The areas of interest included Algeria, Morocco, and also sub-Saharan venues like Mali. Augmenting these bases would be a strong U.S. Navy and Marine force operating in the Gulf of Guinea off the coast of West Africa. "The carrier battle groups of the future may not spend six months in the Mediterranean sea," Jones said, "but I'll bet they spend half the time going down the west coast of Africa."

There are very few known terrorist outfits in the waters off West Africa but there is an enormous amount of oil. Africa possesses an estimated 80 billion barrels of oil, 8 percent of total world crude reserves. The U.S. imports some 16 percent of its foreign oil from this part of the world and by 2015 it is expected to rise to 25 percent. And that makes African oil, in the words of U.S. undersecretary of state for African affairs, Walter Kansteiner, "a national strategic interest."

As the African Oil Policy Group, a Washington lobbying group, reported to the House of Representatives African Subcommittee in 2002, "the Gulf of Guinea oil basin in West Africa, with greater western and southern Africa and its attendant market of 250 million people located astride key sea lanes of communication, [is] a vital interest in U.S. national security calculations."

Nigeria, Angola and Equatorial Guinea, all of them already serious oil powers in their own rights, have territorial claims to the Gulf of Guinea and U.S. oil companies including ExxonMobil, ChevronTexaco, ConocoPhilips and Marathon, along with many other foreign companies, all have invested heavily in the region.

No nation has whetted the appetite of the oil majors more than Sao Tome e Principe, a tiny island some 500 miles west of Equatorial Guinea. Over 20 oil companies have bid for the right to drill in the waters off Sao Tome in a concession that is jointly run by the island's government and neighboring Nigeria. Sao Tome has also been wooed by the U.S. military which would like to build a naval base on the island. Indeed, for a leader of just 150,000 people, president Fradique de Menezes could be said to be hitting above his weight. In September 2002, de Menezes was one of nine African leaders that Bush hosted at the White House. All nine preside over sizeable deposits of African oil.

Just in case Sao Tome doesn't pan out, the U.S. military recently agreed to conduct joint oil protection operations with Nigerian forces in the Niger Delta region of the country, where insurgents from local ethnic communities have targeted international oil workers in a campaign to force out the major oil companies.

As the U.S. searches for new ways to reduce its reliance on Middle East oil, protecting energy supplies from Latin America, Central Asia and West Africa will take on greater importance. The new realignment of its global military might will likely see the U.S. risk placing its armed forces in danger throughout the most treacherous and politically unstable areas of the world for decades to come. It is a scenario likely to be replayed not just in the Persian Gulf but also across the Central Asian republics, West Africa, Southeast Asia and Latin America and anywhere else in the developing world where new oil is found. The net result may ensure America gets the oil it needs, but it is a policy that makes the United States secure, not safer. More U.S. troops will perish protecting oil and hatred of America will expand far beyond the ravings of Islamic extremists. Ultimately, it is an unsustainable policy.

Matthew Yeomans is a freelance writer living in Brooklyn. He writes for Condi Nast Traveler, GQ and Details.