The truth isn't out there

From Dick Cheney on down, the Republican convention's speakers haven't let the facts get in the way of their partisan ferocity. 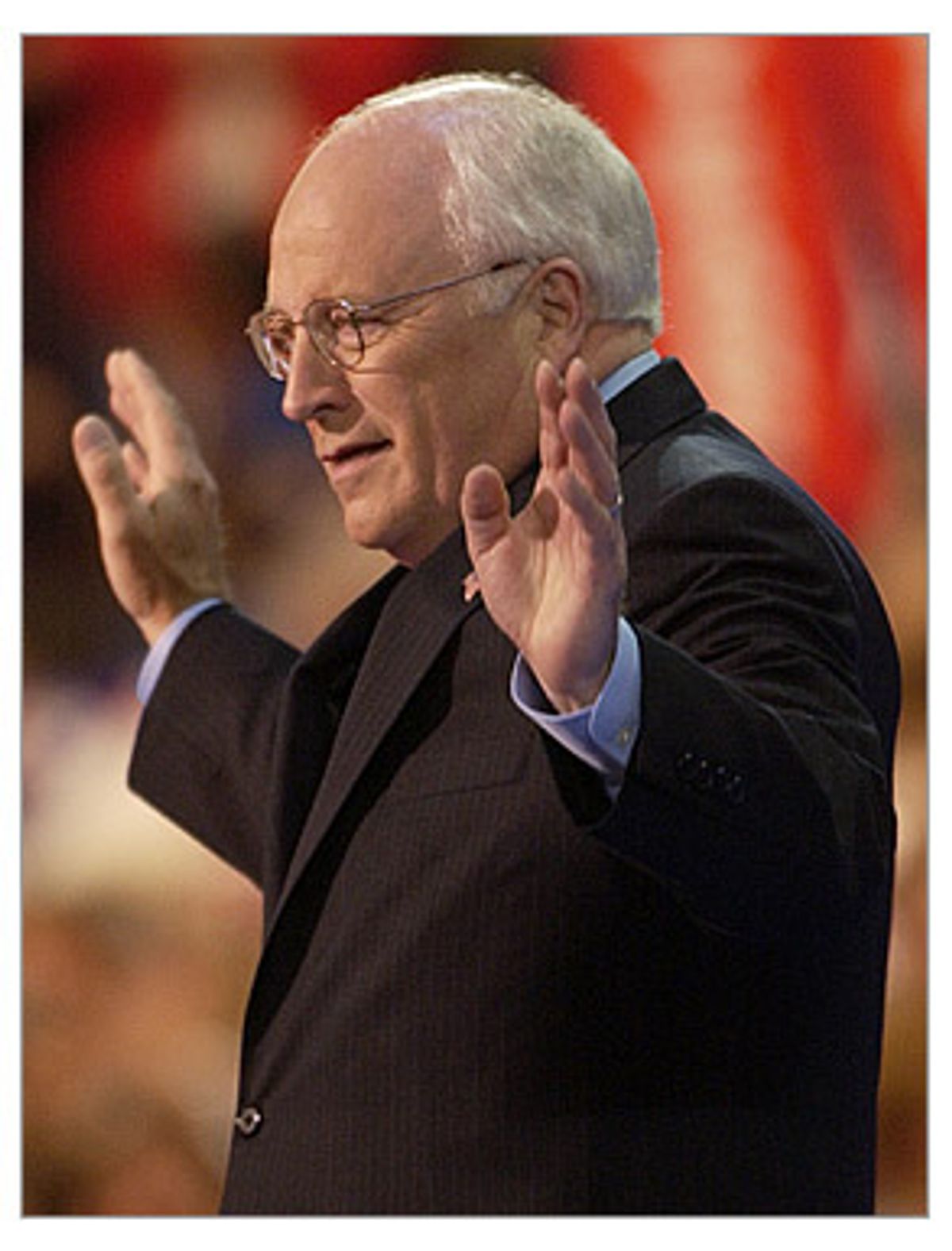 Arnold Schwarzenegger told adoring Republican delegates this week that the Democrats should have called their Boston convention "True Lies." But in speech after speech inside Madison Square Garden, Schwarzenegger's Republican colleagues have shown themselves to be truth-challenged. On big points and small, in policy arguments and personal anecdotes, Republican convention speakers have misrepresented, misconstrued, dissembled and dipsy-doodled. You can argue that they weren't lying, exactly, but you can't say they told the whole truth, either.

Democratic Sen. Zell Miller of Georgia delivered the Republicans' keynote address Wednesday night, and he spent a good portion of it railing against Kerry for voting against the "very weapons system that won the Cold War and that is now winning the war on terror." What Miller didn't say: Many Republicans voted against those same weapons systems.

"America needs to know the facts," Miller said, but he failed to mention a few of them. Miller told the delegates that Kerry voted against production of the F-14 and F-15 fighters and the Apache helicopter, but he didn't say that Dick Cheney, as defense secretary, proposed eliminating both of them, too. Miller criticized Kerry for voting against the B-2 bomber, but he didn't say that President George H.W. Bush also proposed an end to the B-2 bomber program. In his 1992 State of the Union Address, Bush said he supported such cuts "with confidence" based on the recommendations of his Secretary of Defense: Dick Cheney. With the Cold War over, Bush said, failing to cut defense spending would be "insensible to progress."

That's not how Miller described the cuts Wednesday night. He said Kerry's record on defense spending suggests that he wants to arm U.S. troops with "spitballs." Miller, who was introduced as the "conscience of the Democratic Party," didn't see fit to mention that he and Kerry both voted in 2002 for the largest military spending increase in two decades -- a defense bill that Republican Senator John Warner said would "help to ensure that our military has the tools it needs to defend our nation."

Miller and the Bush campaign plainly know the truth about what he was saying -- the Annenberg Public Policy Center and any number of others have called the Republicans on their misleading argument about Kerry's votes on weapons systems. But adherence to the truth wasn't Miller's strong suit Wednesday night.

Miller said that Kerry has made it clear that he would never "use military force without U.N. approval," and that he would let "Paris decide when America needs defending." In fact, what Kerry said in his Boston convention speech was this: "I will never give any nation or international institution a veto over our national security."

Miller's anti-Kerry rant wasn't the only convention speech in which Republicans misrepresented Kerry's statements or his Senate record. In his somniferous speech Wednesday night, Cheney mocked Kerry for saying that the United States should fight a "more sensitive war on terror, as though al-Qaida will be impressed by our softer side." But Kerry has not suggested a show of sensitivity toward al-Qaida; he said that America should fight a "more sensitive war on terror that reaches out to other nations and brings them to our side and lives up to American values in history."

With delegates shouting "flip-flop, flip-flop," Cheney blasted Kerry for supporting the "No Child Left Behind" legislation and then opposing it. In fact, Kerry supports No Child Left Behind but argues that the Bush administration has failed to provide promised funding for it. He mocked Kerry for voting for and then against the $87 billion supplemental funding bill for Iraq, but he didn't explain that Kerry voted on two different proposals -- one that would have paid for the $87 billion by rolling back tax cuts for the rich, and one which simply added the $87 billion to the federal deficit.

Sill, Cheney stayed away from most of the whoppers he tells on the campaign trail. He didn't repeat the phony charge he made last month in Minnesota -- that Kerry has the most liberal lifetime voting record of any current Senator. But Cheney didn't have to work hard to misrepresent Kerry's positions and his record; other convention speakers carried that water for him.

Massachusetts Lt. Gov. Kerry Healey told delegates Wednesday evening that John Kerry "can't win by telling us the truth," but then she immediately fudged the facts herself. In a claim that has been refuted so often that even Cheney doesn't make it anymore, Healey told the delegates: "The truth is that John Kerry -- not Ted Kennedy -- is the most liberal Senator in the United States."

But that's not the truth, really. Earlier this year, the National Journal identified Kerry as the senator with the most liberal voting record in 2003 -- a year in which Kerry missed so many votes while campaigning that the National Journal didn't even apply two of its three measures of "liberalness" to him.

When the magazine looked at the more meaningful lifetime voting records of current sitting senators, Kerry wasn't the most liberal one -- and it wasn't even close. Ten other senators have lifetime liberal scores higher than Kerry's -- and, yes, Ted Kennedy is among them.

Massachusetts Gov. Mitt Romney continued the home-state slam Wednesday, claiming that Kerry had voted for "tax hikes 98 times." The Bush campaign made the same claim in a television ad released last week, and the Annenberg Public Policy Center has already shot it down.

The problem with the "98 times" claim is the Republicans' fuzzy math. While their campaign calculus is getting better -- in March, the President claimed that Kerry "voted over 350 times for higher taxes on the American people" -- the Republicans' calculation repeatedly miscounts and mischaracterizes Kerry's votes.

Annenberg explains that 43 of the 98 "tax increase" votes were actually votes on budget resolutions that did not, in and of themselves, raise taxes. Moreover, in several instances, the total of 98 includes multiple votes on the same piece of legislation: By the GOP's math, Kerry's support for President Clinton's 1993 deficit reduction package as it wound its way through Congress should count as 16 separate votes to raise taxes. Kerry gets dinged six times for a single 1996 budget resolution, seven times for a 1997 budget resolution, and six more times for supporting a proposal to raise the cigarette tax. That proposal was sponsored by Sen. John McCain -- a Republican.

Maryland Lt. Gov. Michael Steele also took Kerry to task for sharing views with Republicans. Steele criticized Kerry for proposing a $6 billion cut in intelligence funding "just a year after the first attack on the World Trade Center." What Steele didn't say: Three months before Kerry made his proposal, Rep. Porter Goss -- Bush's pick to be the new CIA chief -- proposed a much larger cut in intelligence funding. Neither Goss' proposal nor Kerry's passed. But as Annenberg has noted, a Republican proposal to cut $1 billion from the intelligence budget passed on a voice vote the same year.

While Republicans have aimed most of their truth-stretching at Kerry, they have also engaged in the occasional embellishment to bolster Bush's image as a resolute leader. On the convention's opening night, former New York Mayor Rudy Giuliani called Bush "a leader who is willing to stick with difficult decisions even as public opinion shifts." On the second night, Schwarzenegger said that Bush is a "leader who doesn't flinch, doesn't waver, does not back down." While it's true that Bush has stuck stubbornly to some of his failed policies -- until this week, he couldn't bring himself to admit any mistakes in Iraq -- just as often he has crumbled when public opinion has turned against his views.

Bush initially opposed the creation of the Department of Homeland Security, then changed his mind when it was clear the votes were against him. He opposed the creation of the 9/11 Commission, then supported it. He opposed a congressional investigation into the intelligence failures that led to the war in Iraq, then supported it.

The president who was praised so often this week for his "unflinching" war on terror once said he wanted Osama bin Laden "dead or alive", then said that he didn't really care about finding him. The president who never wavers used to say that America will win the war on terror; over the weekend, he said "I don't think we can ever win it"; over the last week, he's been explaining that he didn't really mean what he said when he said it.

The flip-flops don't fit the image Karl Rove has crafted for Bush, so the convention speakers have simply ignored them. In their place, they've told stories suggesting that Bush has shown "courage" by appearing in photo ops -- grabbing that megaphone at Ground Zero, eating turkey with the troops in Baghdad -- and by standing up to public opinion. Schwarzenegger said: "The President didn't go into Iraq because the polls told him it was popular. As a matter of fact, the polls said just the opposite."

But as a matter of fact, that's not a fact. In a CBS/New York Times poll released on March 6, 2003 -- 11 days before Bush gave his final ultimatum to Saddam Hussein -- 69 percent of the respondents said they approved of U.S. military action to remove Hussein from power. While the White House surely helped shape public opinion -- by misrepresenting intelligence, by incessantly linking Saddam Hussein and 9/11, by predicting that American soldiers would be "greeted as liberators" -- the president didn't buck public opinion when he went to war.

On Tuesday night, Senate Majority Leader Bill Frist tried to make Bush look like a strong leader on domestic issues, saying that he would stand up to the trial lawyers who are driving up the costs of healthcare. Repeating a line used by Bush himself, Frist declared: "Let's be clear. You can no longer be both pro-patient and pro-trial lawyer." He said that Kerry has "made his choice" by choosing Edwards as his running mate. But Frist has made his choice, too: in the Republican Senate primary in Florida, Frist endorsed Mel Martinez, a millionaire trial lawyer.

No matter. Frist continued to press his charge, telling the story of a Ft. Lauderdale doctor who he said was forced to give up his medical liability insurance when the costs grew too high. Frist expressed concern that the hospital where the doctor works, Ft. Lauderdale's Broward General, might be forced to close its emergency room because of all those expensive lawsuits by rich trial lawyers. "That hospital has the only Level 1 Trauma Center in the region," Frist said. "What if it closes?" But Vicki Martin, a spokesperson for Broward General, told Salon Wednesday that she is unaware of any discussion about closing the hospital's trauma center. And Frist's claim that Broward General has "the only Level 1 Trauma Center in the region?" That's false, too. There are at least two others, and one of them, Hollywood's Memorial Regional Hospital, is less than 10 miles away.

The Republicans paid tribute to Ronald Reagan Wednesday night, and they've talked a lot this week about the lessons he taught them. They've surely taken one to heart. It was the late president, after all, who once said: "Facts are stupid things."