With the 9/11 tragedy as his backdrop, George Bush rediscovers "compassionate conservatism" in time to court women voters. 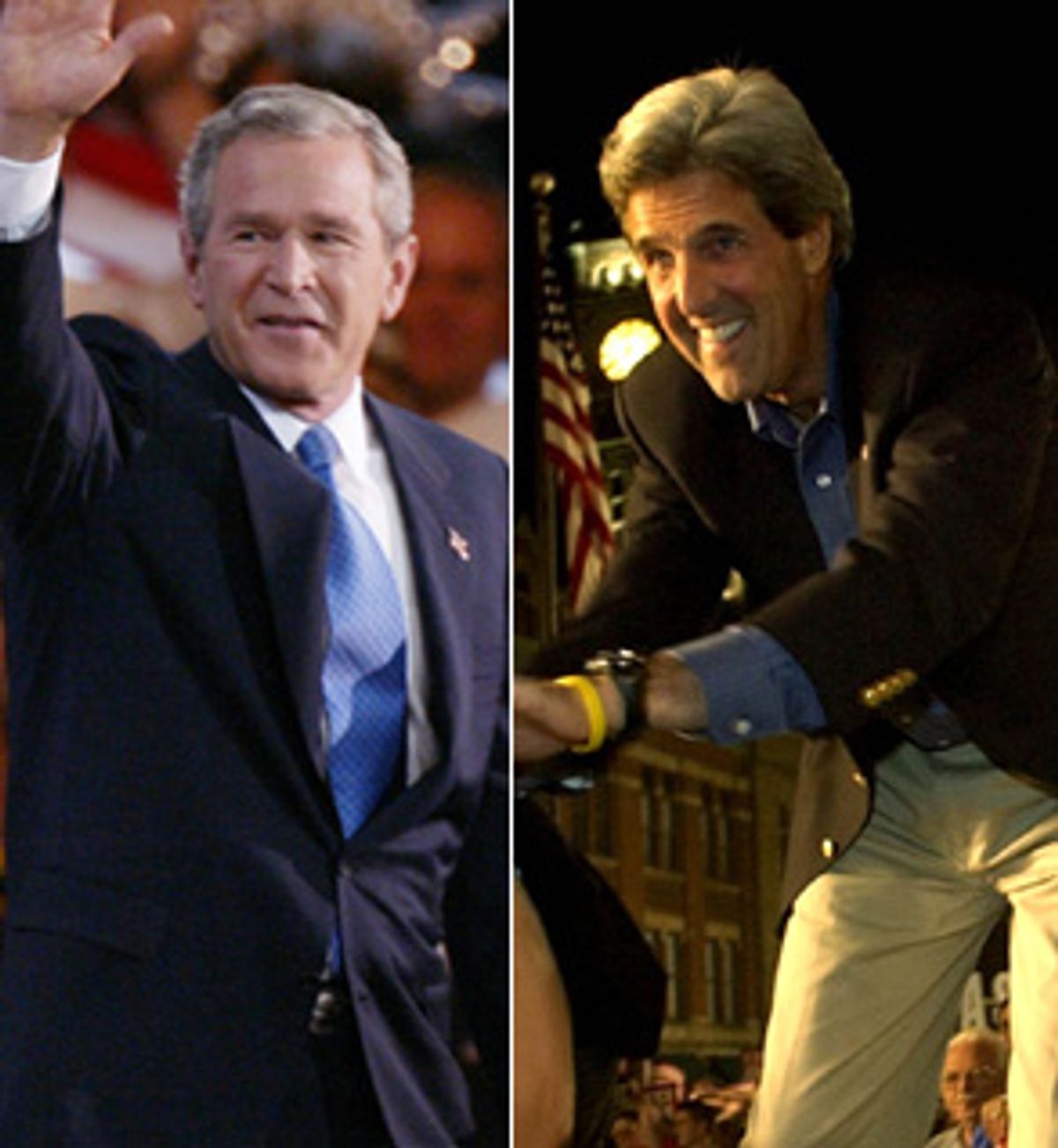 George W. Bush accepted the Republican nomination for president Thursday, dragging his "compassionate conservatism" slogan out of the spider hole where it's been hiding since the Sept. 11 attacks, emphasizing education, health and other domestic priorities that pollsters say appeal to women. "I am running with a compassionate conservative philosophy: that government should help people improve their lives, not try to run their lives," the president said in his prime-time speech on the final evening of the Republican National Convention in New York, officially kicking off his reelection campaign.

The second-term domestic agenda Bush proposed, however, was rather shopworn: tax incentives for businesses in depressed areas (his father called them "Empowerment Zones"; his are "Opportunity Zones"), personal investment accounts for Social Security and other staples of the Republican diet. Bush also advocated welfare reform -- but wait? Didn't President Clinton already do that? And didn't Clinton also make worker retraining, as Bush said he would push through increased community college funding, a centerpiece of his domestic policy? Bush spoke of tax reform but gave no specifics. Could he mean that flat tax that Steve Forbes was pushing four years ago? And why didn't he mention the ballooning federal deficits? As a forward-looking blueprint for a second Bush term, the speech disappointed.

But as a showcase of the softer, compassionate side of Bush, it was a success. There were gauzy video spots of Bush hugging children and romping with his terrier, Barney, and videotaped testimonials to his character from Laura Bush. There were nods to his mother, Barbara. And even when Bush mentioned a perennial Republican goal -- tort reform -- he managed to link it as well to women, arguing that medical malpractice lawsuits are causing obstetricians to leave the birthing business. In other words, a lot of poll-tested estrogen. It came just in time, after the double-barreled attacks of nominal Democratic Sen. Zell Miller and Vice President Dick Cheney on Wednesday night.

The evening's theme was "A safer world, a more hopeful America." But much of the buildup to the speech, particularly a sad, syrupy video narrated by former Sen. Fred Thompson, focused on the tragedy of Sept. 11, to a point that bordered on political exploitation at a convention based in New York. During the speech, it was the red-meat conservative issues that brought the delegates to their feet: Bush's calls for making his tax cuts permanent, for banning gay marriage and continuing a muscular defense of America. When Bush declared, "I will never relent in defending America, whatever it takes," the delegates leapt to their feet amid chants of "USA!"

At one point, Bush appeared to offer a justification for his decision to invade Iraq, even though the country turned out not to possess weapons of mass destruction. He noted that a bipartisan vote in Congress approved the use of force, and that Iraqi leader Saddam Hussein had repeatedly flouted United Nations resolutions to disarm.

"I faced the kind of decision that comes only to the Oval Office, a decision no president would ask for, but must be prepared to make. Do I forget the lessons of Sept. 11 and take the word of a madman, or do I take action to defend our country? Faced with that choice, I will defend America every time," he said.

But when Bush declared his strategy against terrorism a success, a group of protesters who had infiltrated the convention began screaming at him. At first, to drown the women out, a small group of GOP delegates began chanting, "Four more years!" Then, as it dawned on the rest of the crowd that a disruption was taking place, cheers of "USA! USA!" quickly smothered the thin voices of protest.

From the press dais, I stood up and strained to watch as the protesters were hustled out of the GOP's big show. All I could see were the backs of an officer and a woman with long brown hair, who was being pushed along. As they exited, they bumped into an overweight man in a furry elephant hat with American-flag ear flaps and a shirt full of Bush-Cheney campaign buttons. The man looked pleased at having been momentarily in the action.

In interviews on the convention floor, delegates dismissed the protesters as not indicative of the host city, even though tens of thousands marched in the streets here less than a week ago to protest Bush. "New York doesn't hate him. If you look at these protesters, they're not from around here," delegate Debbie Turner, who hails from Waxahachie, Texas, and runs a newsletter chronicling the world of chili cook-offs, said as the protesters were removed. (Turner also said she had little doubt that Osama bin Laden had plotted with Saddam Hussein to attack America.)

"Everybody loves him," Al Walker of South Dakota said of Bush. Then how to explain the protesters, both inside and outside of Madison Square Garden? "Well, there's a lot of people in this country who don't know what it takes to be free," he said.

There was quite a bit of booing, usually at the mention of Democratic nominee John Kerry. The crowd booed when Bush dredged up Kerry's speech, 16 years ago to the Democratic Convention, in which he called the Reagan presidency a period of "moral darkness." And they booed when Bush scolded Kerry for mocking the "coalition of the willing" in Iraq as the "coalition of the coerced and bribed." Such countries as El Salvador and Poland that fought alongside the United States "earned the respect of all Americans, not the scorn of a politician," Bush said, to loud cheers.

Bush wound up with a crowd-pleasing joke: "Some folks look at me and see a certain swagger, which in Texas is called 'walking.'" He closed with what was clearly the speechwriter's flourish: "To everything we know there is a season, a time for sadness, a time for struggle, a time for rebuilding. And now we have reached a time for hope. This young century will be liberty's century. By promoting liberty abroad, we will build a safer world."

Then, Vice President Dick Cheney and his wife, Lynne, emerged on the stage. Laura Bush, in a coral suit, kissed Lynne Cheney, who wore blue. The president and vice president slapped each other on the backs and waved. Red, white and blue balloons dropped. Confetti, in the same patriotic colors, fluttered down, and shiny streamers like fireworks were fired into the air.

Kerry, meanwhile, was in Springfield, Ohio, preparing to rebut the Bush speech, having learned from the Swift Boat Veterans for Truth group how much damage can be inflicted if charges go unanswered. In an unusually passionate oratory, he called Bush "unfit to lead our country." Of Cheney, who didn't serve in Vietnam, Kerry said: "I'm going to leave it up to the voters to decide whether five deferments make someone more qualified [to be commander in chief] than two tours of duty."

Back at Madison Square Garden, workers swept up the confetti and used special sticks to pop the balloons, while Bush prepared to hit the campaign trail in Pennsylvania. The party had just ended, but the campaign had already moved on.