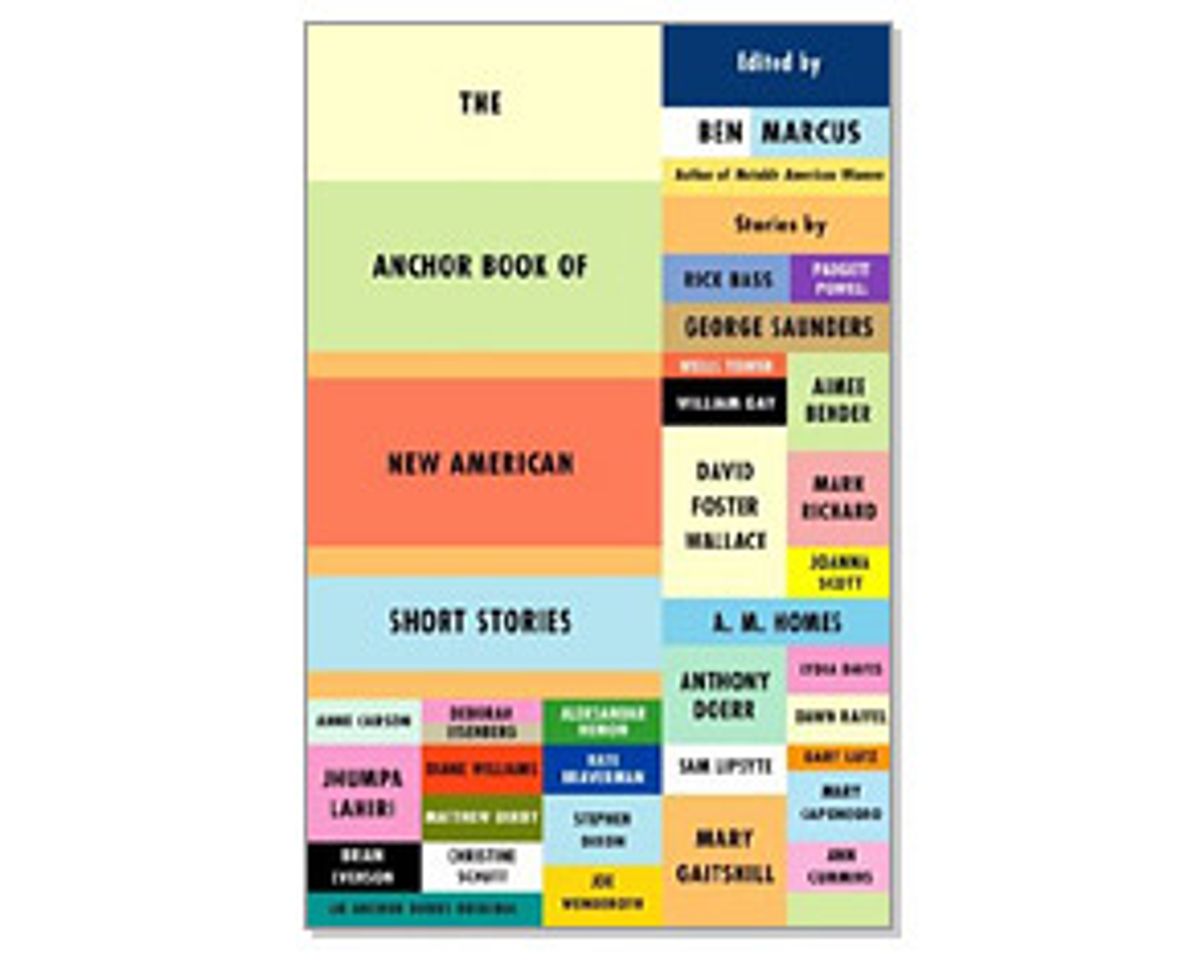 What makes a short story worth reading? This is the question at the heart of the 29 stories Ben Marcus has collected in "The Anchor Book of New American Short Stories." And it's the question that the writers themselves are trying to answer, in 29 different ways. But this isn't just a textbook for creative writing workshoppers; it is also a collection of entertaining, moving and sometimes shocking fiction, and as such, deserves to be read by everyone.

Marcus, an associate professor of creative writing at Columbia University and the author of the story collection "The Age of Wire and String" (1995) and the novel "Notable American Women" (2002), assembled this anthology with an essentially personal approach. "In each case as I sat down to read," he writes in the book's introduction, "I had to be turned from a somewhat dull, unpromising person into one enlivened, antagonized, buttressed, awed, stunned by what he was reading." It's an intimate way of putting together a book, the publishing equivalent of a friend saying, "Read this! It's great!" Lucky for us, Marcus is a friend whose enthusiasm we can share.

What makes these stories "new" isn't their age or their writers. Most of the authors featured in this collection -- George Saunders, Aimee Bender, Mary Gaitskill and David Foster Wallace among them -- are well-known and have been writing for a long time. Their stories, too, have all been previously published sometime in the last 16 years.

Calling these stories new, Marcus writes, "is a way of saying that the writers are laboring in an entirely new stylistic moment." What that moment is he doesn't elaborate, although it's clearly related to the bleak climate for short fiction that we've been living in since the mid-1980s. With a couple of notable exceptions -- Lorrie Moore's 1998 bestseller, "Birds of America," and Jhumpa Lahiri's Pulitzer Prize-winning "The Interpreter of Maladies" (1999) -- short story collections in the last 20 years have rarely found an audience outside academia. Partly this is due to the diminished market -- less fiction is published in major magazines -- and the circular relationship between obscurity and experimentation: Laboring without hope of a large audience, writers feel freer to experiment; the stories they produce are then too experimental to find a large audience.

Many such stories have no beginning or ending or narrative arc, or are so short that they contain no more than a single line, or are written with so many made-up words that they warrant their own dictionary. Often they feel like they were written for MFA students, the one cohesive audience that short stories have left. And here is where the stories in "The Anchor Book" differentiate themselves: Almost all of them (and more on the rest later) seem to have been written for real readers. Stylistically, they revolt against tradition, but they are also less interested in making formalistic statements than they are in lodging themselves in our imagination. "This is [the authors'] guess," writes Marcus, "at what literary styles will puncture our inattention and qualify as relevancies."

The best example of this is Aleksandar Hemon's "The Life and Work of Alphonse Kauders." In a series of disjointed, biographical statements, Hemon presents Kauders, a forestry bibliographer and lover of pornography whose life intersects with real-life villains of the 20th century: Hitler, Goebbels, Stalin, Tito. The result is an absurd and darkly funny view of cataclysmic events, as if Kauders was the personified spirit of the two world wars and the Soviet Revolution. One of the fragments reads, in total, "Alphonse Kauders was the owner of the revolver used to assassinate King Alexander." In another, Kauders effectively starts World War I when he stands behind a trembling Gavrilo Princip and whispers, chillingly, "Shoot, brother, what kind of Serb are you?"

Hemon's use of fragments works for "Alphonse Kauders"; the structure reflects the story's blurring of fiction and nonfiction. And the parts add up to more than their sum: We fill in what is not said with our knowledge of history. A few of the stories in this collection, however, don't say enough. Incoherent and ultimately shallow, they offer little besides quirky observations. In "Short Talks," Anne Carson presents a series of unrelated paragraphs with titles like "On Disappointments in Music" and "On Trout." Lydia Davis' "The Old Dictionary" is a single long paragraph in which the narrator wonders why she treats her dictionary more carefully than her son. And "Letters to Wendy's," which Joe Wenderoth conceives as a story in fast-food restaurant comment cards, contains exasperating nuggets of absurdities. In one entry, for example, the narrator flatly declares: "It is rare for a baby to be so bad that it is sentenced to be hanged, and even rarer for the sentence to be carried out, and yet, when a baby is hung, what a pleasant surprise it is for the passersby." Wenderoth doesnt really expand on this statement, and hanged babies have nothing to do with the rest of the comment-card entries. Its an outrageous image with no context, one that shocks and disturbs but signifies nothing.

At best, "Short Talks," "The Old Dictionary" and "Letters to Wendy's" are prose poems, filled with vivid images and smart turns of phrase. But they offer nothing in the way of narrative, no revelation of the human condition. They not only experiment with form but take experimentation to such an extreme that it's impossible to even call them stories. Which is not to say that shortness or disjointedness can't produce a great story: Diane Williams' "All American," included in this anthology, is shorter than Davis' contribution, but in its six brief paragraphs we get an entire narrative about a woman tinkering with the boundaries of aggression and love. The three "interviews" that comprise an excerpt from David Foster Wallace's "Brief Interviews with Hideous Men" are really two monologues and a conversation by unrelated characters. But they work together to portray an entire world of lives that revolve around sexual obsessions.

More common in this collection are stories that experiment with language and genre, and they are the ones that are the most satisfying. In George Saunders' "Sea Oak," the narrator, who works at a male strip club called "Joysticks," and his sister and cousin, young mothers who watch a TV show called "How My Child Died Violently" while halfheartedly studying for their GEDs, fester in a low-rent, ambitionless existence. The story feels like a typical treatise on poverty, until the characters' aunt comes back from the dead and, while decomposing in the living room, orders them to get their lives together. In "Everything Ravaged, Everything Burned," by Wells Tower, a group of marauding Vikings, who talk like contemporary badasses, set sail on their last kill-and-pillage mission. As with "Sea Oak" and "Alphonse Kauders," the surreal elements here give a new perspective to terrible events -- in this case, the merciless slaughter of an island's innocent citizens. And it's oddly hilarious when Djarf, the bloodthirsty captain, loses it when his crew insists on abandoning the mission. "Aaaaah! You motherfuckers are mutinizing me?" he yells in disbelief.

"A writer has to believe, and prove, that there are, if not new stories, then new ways of telling the old ones," writes Marcus. Anachronisms and touches of science fiction are not the only way that the writers in this collection do this. Others are more subtle and realistic, presenting stories that are, in fact, told and retold, but with a fresh perspective. A.M. Homes' "Do Not Disturb" and Mary Gaitskill's "Tiny, Smiling Daddy" quietly reveal a large story behind a protagonist's narrow point of view. Homes' narrator is trying to leave a bad marriage, "a situation that has become oxygenless and addictive, a suffocating annihilation," when his wife develops ovarian cancer. She is, as they both readily admit, a bitch, but we also see him needling her unnecessarily, unaware of his own role in their fights. Similarly, the father in "Tiny, Smiling Daddy" cannot understand why his daughter feels estranged from him, but through his account we see him rejecting her for being gay.

Stories are our most primal way of explaining ourselves to ourselves; they are an instinctual need. Most of the stories here put this need first, and that's why they work. It doesn't even really matter that they are structurally experimental, or that they defy classification by genre. What matters is that they contain that kind of story magic that can leave a person, as Marcus describes it, "paralyzed on the outside, but very nearly spasming within."

Although it comes closer to the end of the book, the spiritual center of the collection is Deborah Eisenberg's breathtaking story "Someone to Talk To." In it, Shapiro, a washed-up and somewhat depressed pianist, on a visit to a war-torn Latin American country, is interviewed by an English radio journalist named Beale who can't stop talking long enough to ask Shapiro any questions. Beale is an accidental prophet, an insufferable person who unknowingly reveals secret answers to Shapiro's private sufferings. In a sudden, impassioned speech (which purports to be about radio, not literature), he perfectly sums up the transaction between writer and reader that makes stories such a thrilling process of discovery:

"Oh my darling! Someone is talking to you, and you don't know ... what thing they've found to tell you on that very day, at that very moment. Maybe someone will talk to you about cookery. Maybe someone will talk to you about a Cabinet Minister. And then that particular thing is yours, do you see what I mean? Who knows whether it's something worth hearing? Who knows whether there's someone out there to hear it! It's a leap of faith, do you see? That both parties are making. Really the most enormous leap of faith."